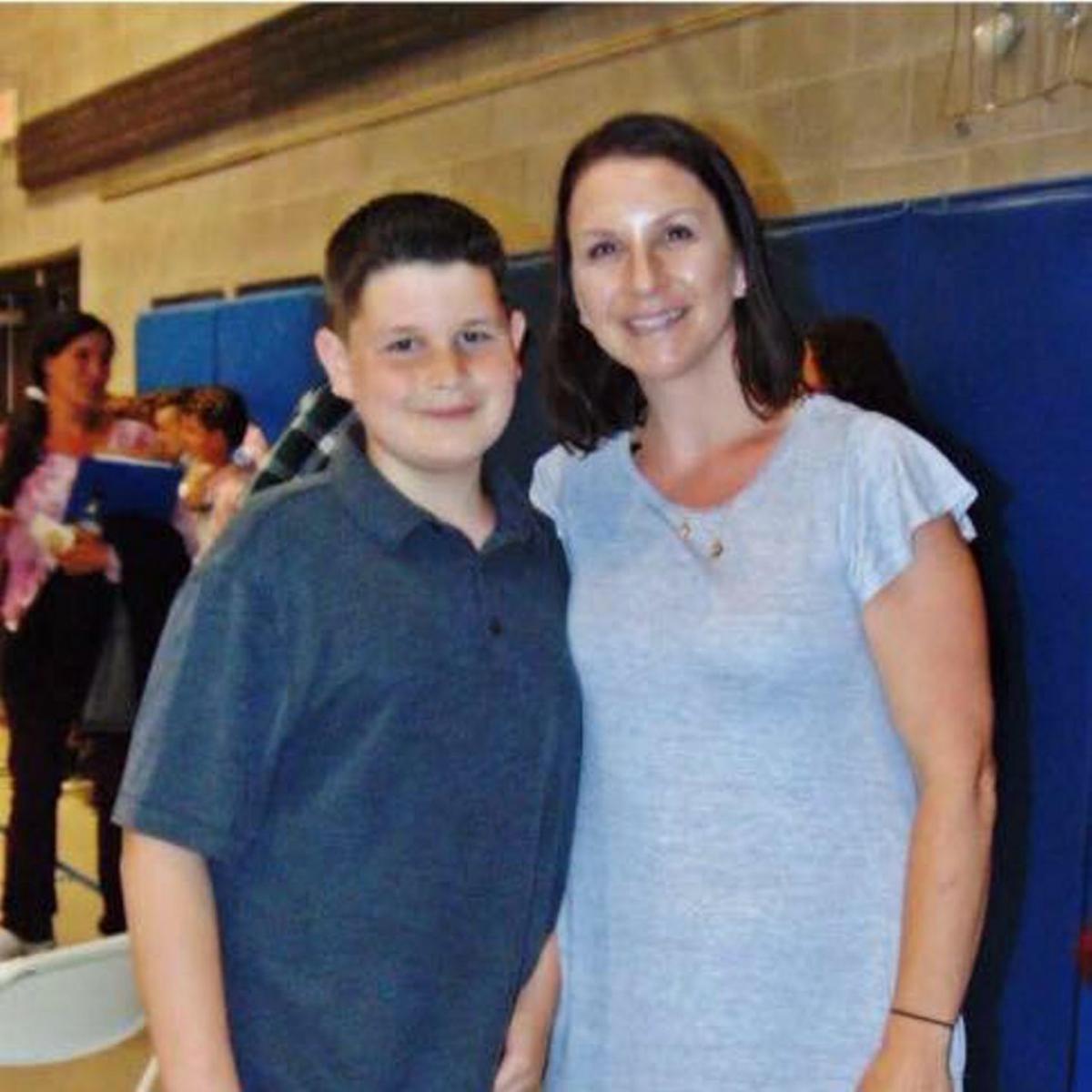 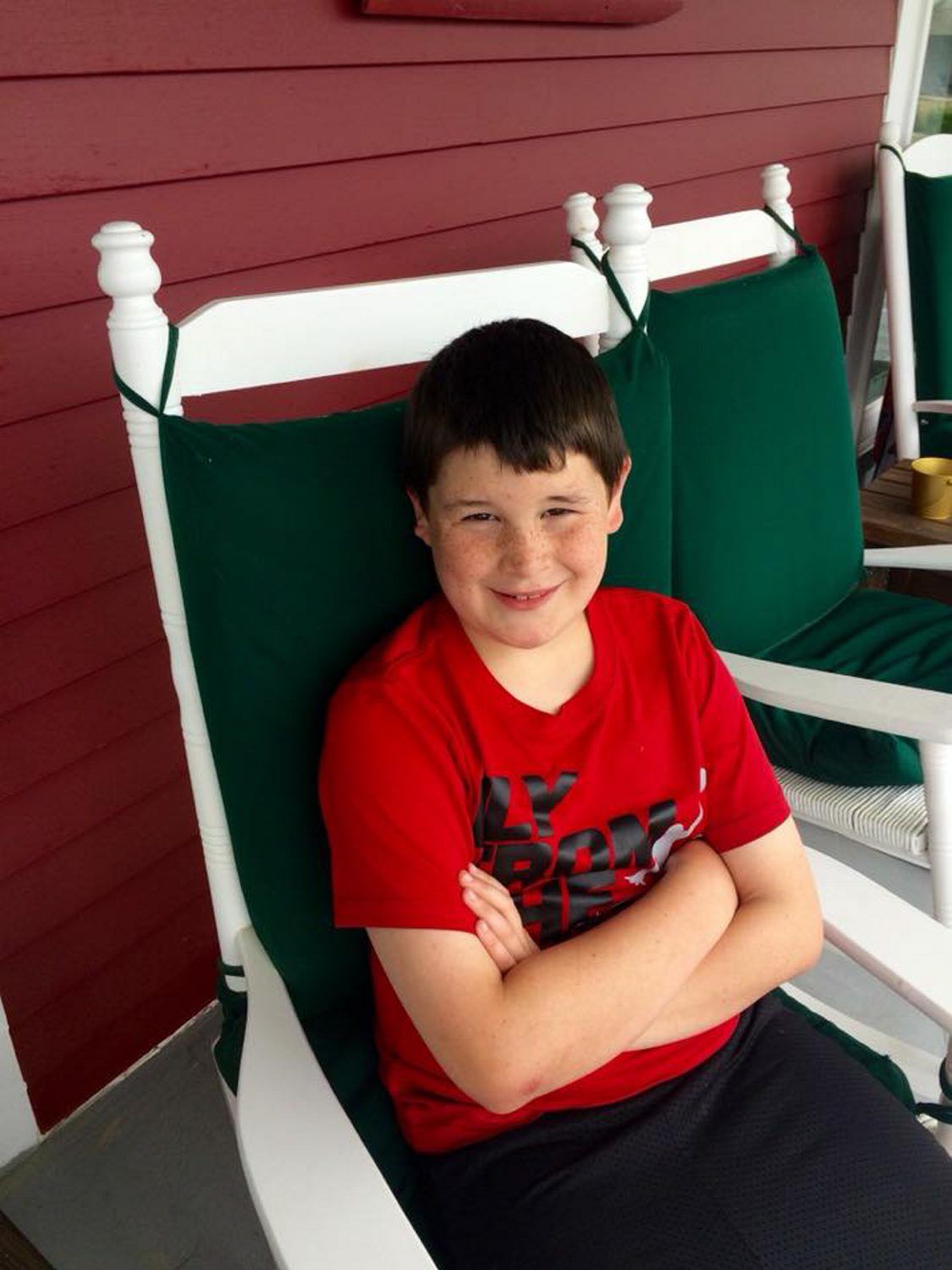 Jack Isenberg of Orford loved his family, his pets and cartoons. His suicide last May has devastated his family. 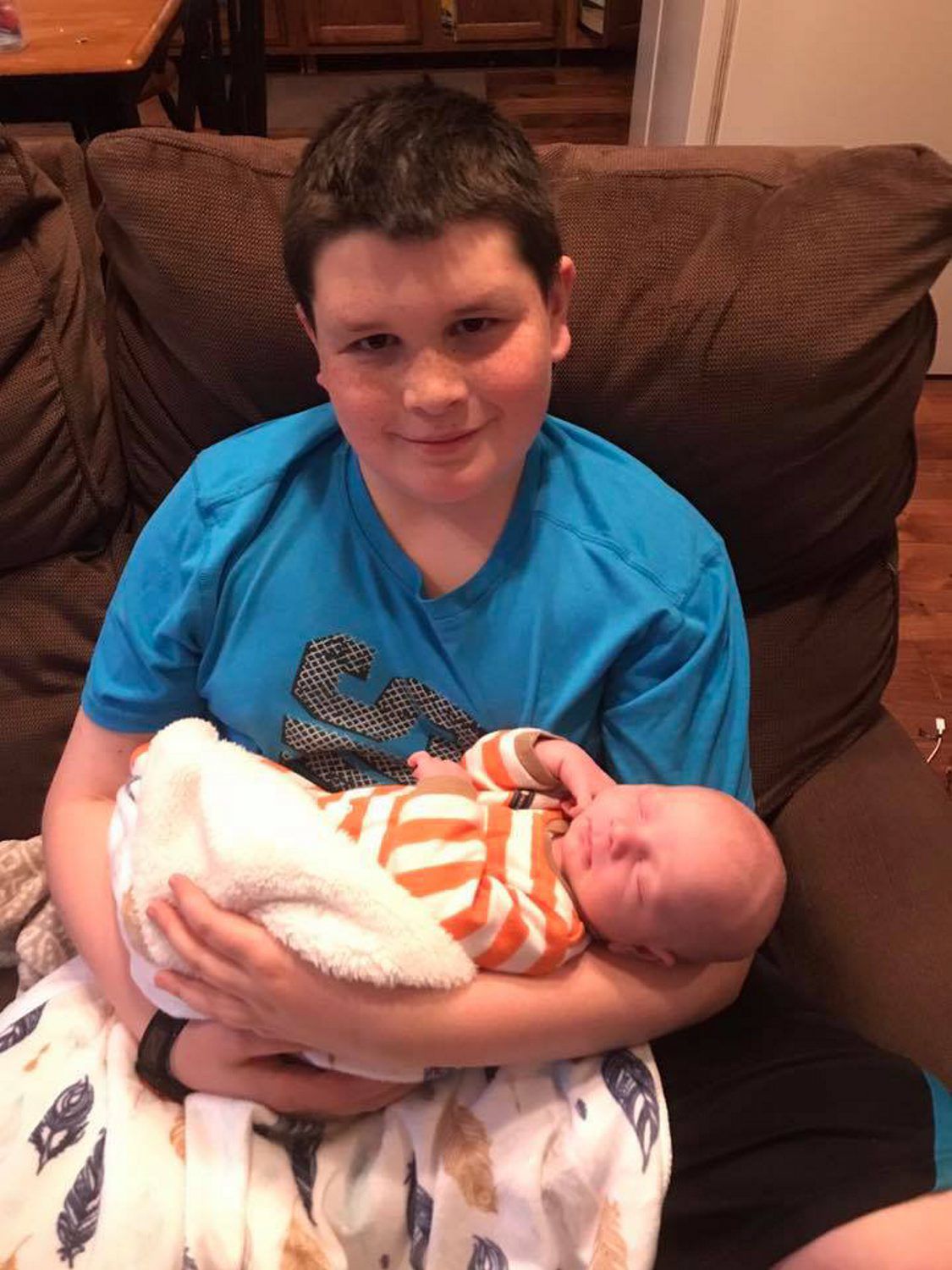 Jack Isenberg was a proud big brother when baby Cyrus was born last May. This is the last photo his mother has of her son. 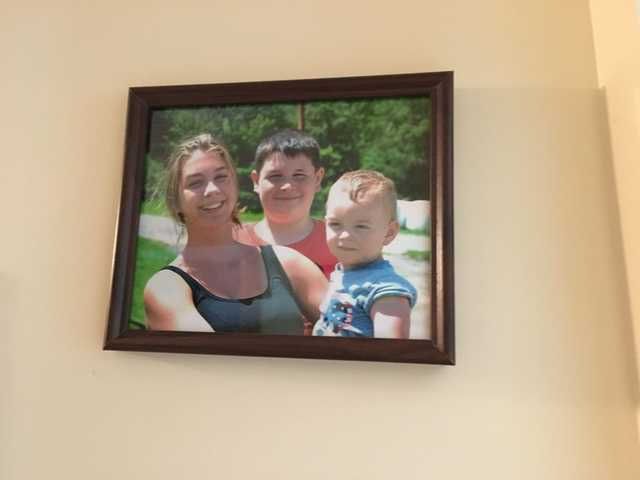 Jack Isenberg was a devoted brother to his big sister Sophia and his little brother Gus. 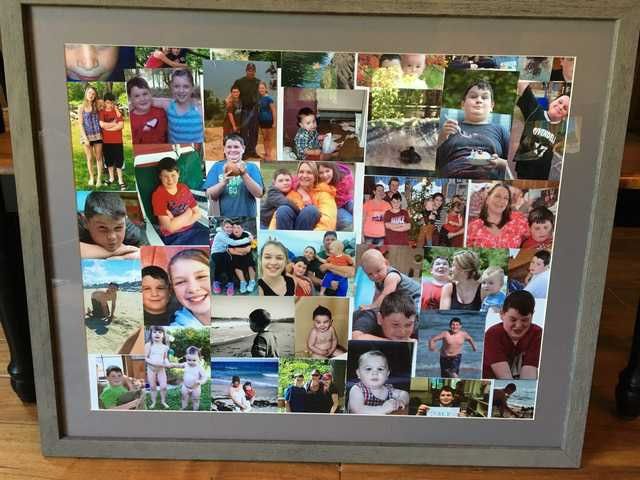 Jack Isenberg's family created a collage of cherished photos for a memorial service in May 2018. 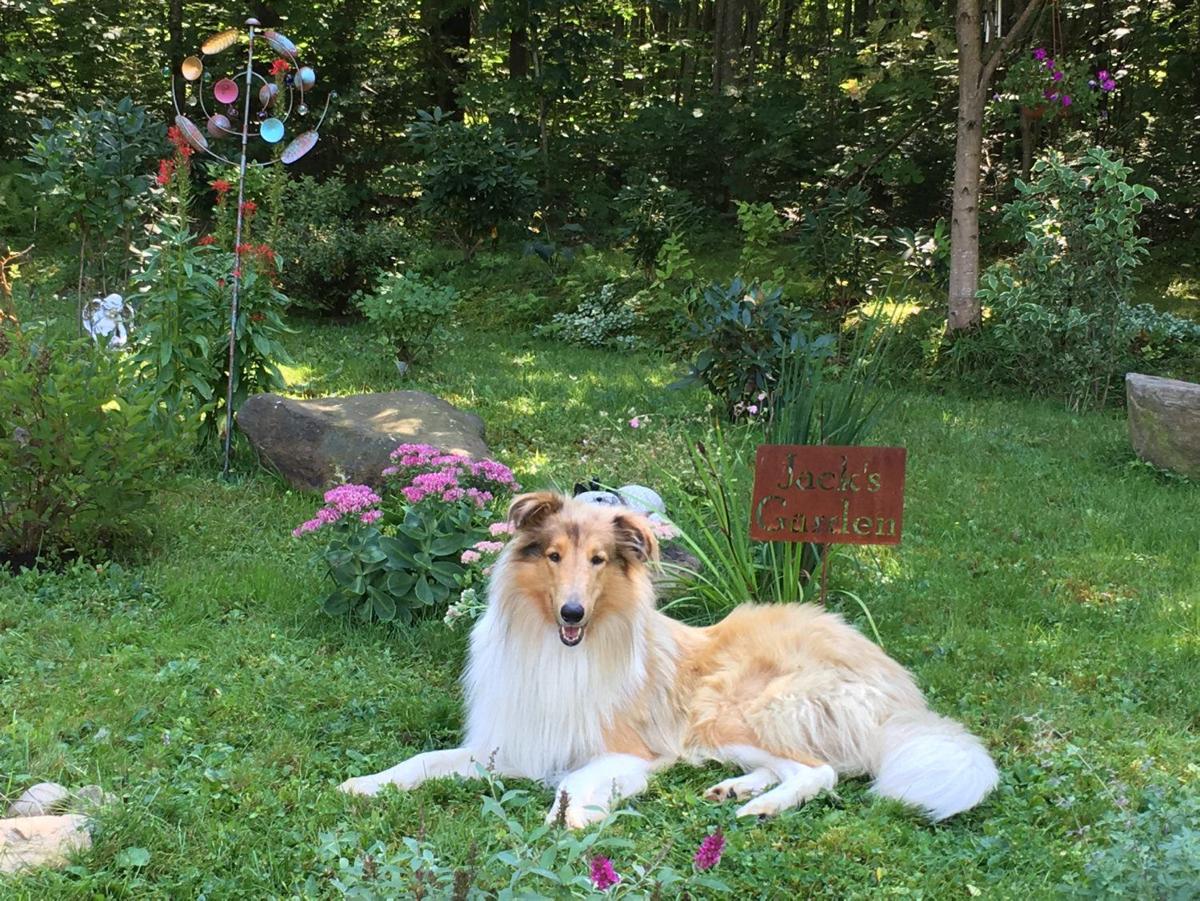 The family of Jack Isenberg, pictured in inset, created a memorial garden at their Orford home. The boy's collie, Bozzy, likes to spend time there. 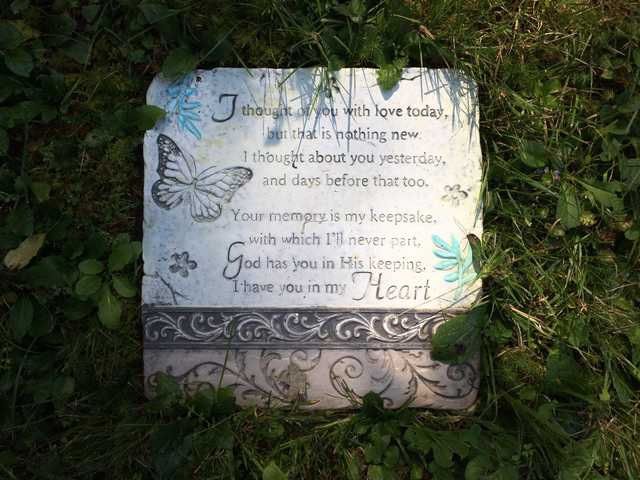 This stone is part of a memorial garden Jack Isenberg's family planted for him at their Orford home after the 12-year-old killed himself in May. 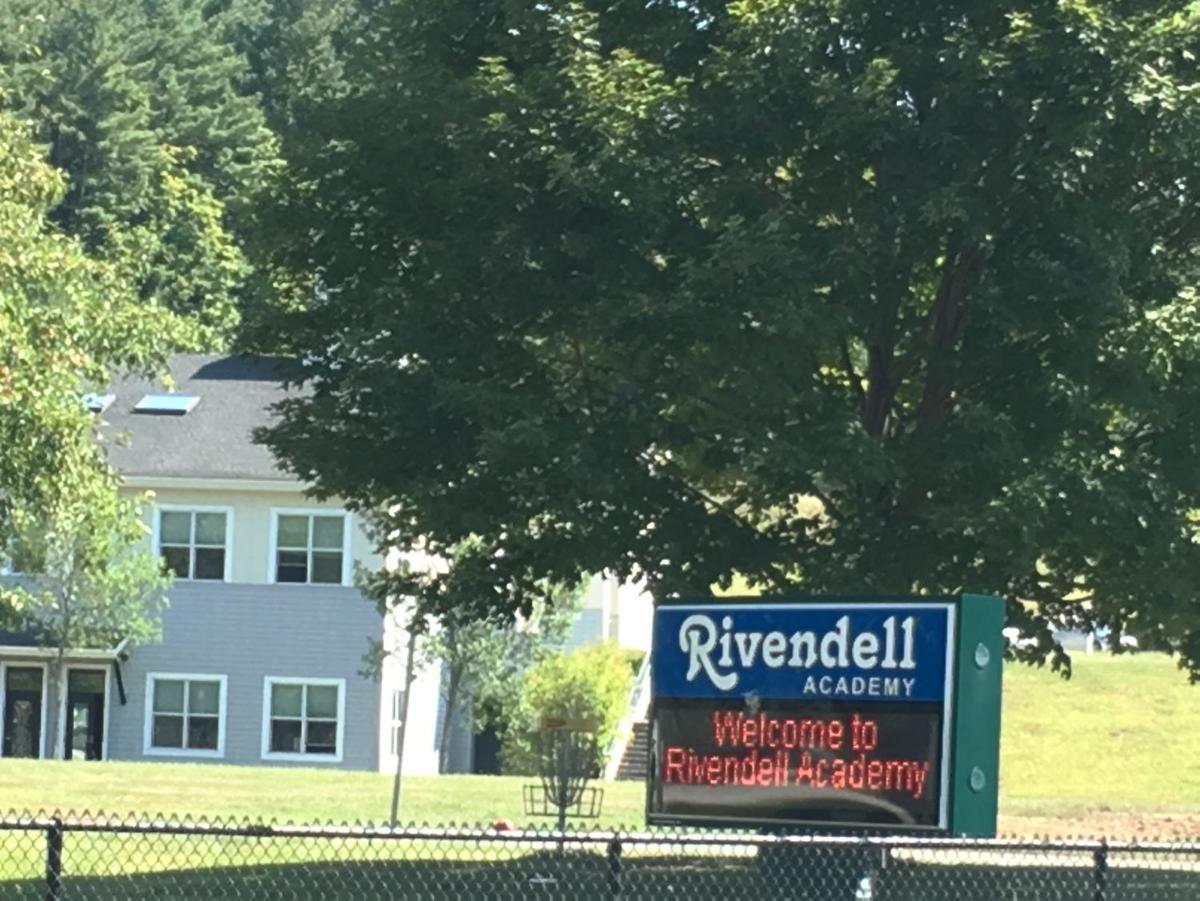 Jack Isenberg was a seventh-grader at Rivendell Academy in Orford, where his family says the autistic boy was bullied by other kids because he was different.

Jack Isenberg of Orford loved his family, his pets and cartoons. His suicide last May has devastated his family.

Jack Isenberg was a proud big brother when baby Cyrus was born last May. This is the last photo his mother has of her son.

Jack Isenberg was a devoted brother to his big sister Sophia and his little brother Gus.

Jack Isenberg's family created a collage of cherished photos for a memorial service in May 2018.

The family of Jack Isenberg, pictured in inset, created a memorial garden at their Orford home. The boy's collie, Bozzy, likes to spend time there.

This stone is part of a memorial garden Jack Isenberg's family planted for him at their Orford home after the 12-year-old killed himself in May.

Jack Isenberg was a seventh-grader at Rivendell Academy in Orford, where his family says the autistic boy was bullied by other kids because he was different.

ORFORD -- Jack Isenberg was funny and quirky, sweet-natured and kind-hearted.

Jack was devoted to his family, his collie and his two cats. He liked riding his bike and playing basketball, and he loved cartoons. He wanted to become a chef.

"He was just the fun in our house," his mom says. "He glued everything, all the kids, together."

On May 26, Jack hanged himself on his family's property. He was 12 years old.

Now Danielle Bencze, his mother, is turning her pain and loss into a mission: To save someone else's child. To spare another mom her unfathomable grief.

Jack began showing signs of developmental delays as a small boy; at age 7, doctors at Dartmouth-Hitchcock Medical Center determined he had high-functioning autism, his mother said.

Jack, the second oldest of her four children, "showed me life from a total opposite perspective," Bencze said. Children with autism, she said, "perceive stuff differently than we do."

As he got older, Jack had a few good friends, but he also was teased for being different, his mother said. "He got picked on in music class, recess, gym class," Bencze said. "It was all constant little stuff that kind of added up."

A year ago, Jack started seventh grade at Rivendell Academy, a 220-student public middle/high school shared by towns in New Hampshire and Vermont. Bencze noticed changes in her son's behavior, which she attributed to adolescence. "He would be in a bad mood, eating his snack and going out to play with the dog," she said.

"Everything that I thought was puberty, for all I know, could have been depression," she said. "They sleep more; their attitudes change."

Bencze said she knew Jack was bullied, and she had talked to school officials about it. She had suggested to her son that she could call the parents of the other kids involved. But Jack worried about getting in trouble. "I think he just kind of dealt with it," she said.

'Nobody ever told me'

That terrible Saturday, Jack had gone off on his own. It wasn't uncommon for him to wander around with his young collie, Bozzy, playing in the woods or visiting relatives who live around the corner.

But when he didn't come home, the family started searching for him. "I just couldn't find him," Bencze said. "My neighbors heard me screaming for him. We all knew something was wrong."

Stigma often makes suicide a closely-kept secret in families. But Bencze is steeling herself to talk about what happened.

"I would never in a million years have thought that this would happen to me," she said. "There's another mom out there who thinks the same thing."

She would only learn after Jack's death that children with autism are more likely to attempt suicide than other kids. "Nobody ever told me," she said. "Now, sharing that, somebody else will have that information."

After her son died, she found out that Jack had been in a fight in the schoolyard. It ended with a final taunt from another boy, suggesting that Jack should go home and kill himself, Bencze said.

The next day, he did.

Bencze said school officials told her what happened was just a "play fight." But parents of kids who witnessed it have told her otherwise.

She doesn't blame the kids for what happened, Bencze said. "Kids are kids," she said. "Jack did what Jack did. For children, they just don't have the mental capacity to really understand the weight of their words and what their actions are."

But adults can make a difference, she said. "Parents really need to teach and instill values in their children," she said.

And that's the terrible gift she hopes may come from losing her cherished boy. "It's everyone's job to be kind," she said. "If one person is kind to another person, that person might want to be kind. It can start a chain reaction."

Her Jack understood kindness. He was generous to the elderly neighbors who lived down the road, shoveling snow, doing yardwork and stacking wood for them, Bencze said. And sometimes, she said, "He would go over just to talk to them."

In a letter to families at the start of this school year, Rivendell Academy Head of School Keri Gelenian called on the community to remember Jack not in sadness but for his “approach to living.”

“Jack was an energetic and creative young person. He could be outlandish, thoughtful, and sensitive — all at once,” she wrote. “We should all aspire to exhibit Jack’s energy and fun-loving attitude toward life. Jack would want us to have fun, engage one another, be kind, and helpful.”

Elaine Arbour, superintendent of Rivendell Interstate School District, said she wasn't comfortable talking about Jack Isenberg's death, out of respect for the family's privacy. But, she said, "Any time we lose a student in any manner, it's a serious loss to the school community and it affects everybody in different ways."

Arbour said some changes were planned for this year even before Jack's death, including a new full-time middle-school guidance counselor at Rivendell Academy. And the district is bringing in more mental health services for kids who need additional support, she said.

Since Jack died, Bencze has been through a range of emotions: grief, devastation, and anger. "I am angry I can't see him at graduation, see milestones that other mothers get to do," she said.

She has to be strong for her three other children, 15-year-old Sophia, who doted on Jack; 3-year-old Gus, who adored his big brother; and her newborn, Cyrus, who will never know him.

"This doesn't end here. When the boys turn 12..." she stopped to collect herself. "There's always going to be triggers and relapse and hard days and weeks."

What will she tell her baby someday about Jack? "That he was an amazing big brother and he was so excited for his arrival, and he felt so proud to hold him," she said.

Jack is also survived by his father and stepmother, Stefan and Morgana Isenberg of Goffstown, his stepfather, Clifton Taylor, and two stepsisters.

Morgana Isenberg participated in the Out of the Darkness walk last weekend in Concord, raising nearly $2,000 for suicide prevention in Jack's name. "He was the most lovable, huggable, sweetest boy in the whole wide world," she told the Sunday News.

The weight of words

Bencze wants people, adults and kids alike, to understand the "weight of our words," she said. "We don't know what other people are dealing with.

"I think sometimes there's just a push or there's just the final straw or something that just resonates in you or just cuts right through you. And if you're already fragile, it doesn't take much," she said.

Jack also struggled with mobility and social skills. "He had a lot stacked up against him, and he was still a very happy boy and still so kind to other people," she said.

So she finds the courage to speak out in memory of her kind-hearted boy. "The way Jack was so helpful with people, I just feel like it's honoring him," she said. "I will put myself out there if it means helping somebody else."

Bencze urges other parents to watch for signs of how their children may be suffering silently.

"Check electronic devices, histories," she said. "Go through their rooms. If they have a journal, go look at the damn thing. If it can save your kid's life, do it."

Jack wasn't allowed to have a cellphone, and after a previous bullying incident, she took away his tablet.

“The kids were making fun of him and being mean to him,” she said.

But being the one kid in school who doesn’t have a cell phone can make you a target as well, she knows.

"I tried putting him almost in a bubble," she said. "But you really cannot be with your child every single second."

So it comes back to raising children with “good morals and values,” she said.

“And you have to start practicing that at home.”

While she doesn't blame the other kids, she does blame herself, Bencze said. "It's every mom's job to give their kid a happy, great, fantastic life," she said. "It's our job to raise our children, protect them, love them, help them achieve their goals, their dreams.

Beyond the Stigma, a series exploring solutions to the state's addiction and mental health challenges, is sponsored by the New Hampshire Solutions Journalism Lab at the Nackey S. Loeb School of Communications and funded by the New Hampshire Charitable Foundation, Dartmouth-Hitchcock Medical Center, NAMI New Hampshire and private individuals. Contact reporter Shawne K. Wickham at swickham@unionleader.com.