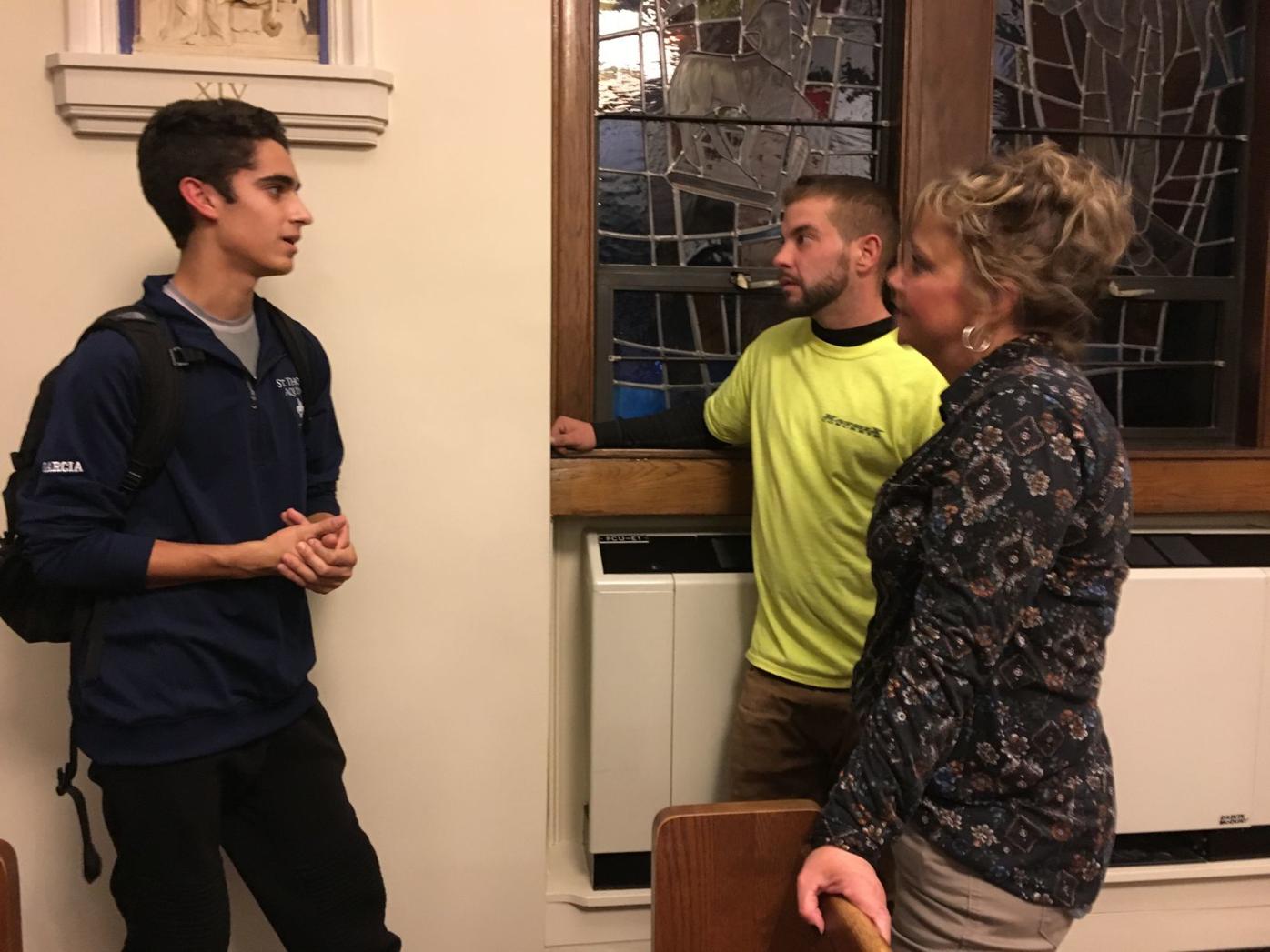 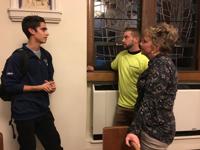 Diego Garcia, left, a junior at St. Thomas Aquinas High School in Dover, talks with Lynn Fuller, right, and Chris Sprague about a research project he’s doing on addiction after the “Families Coping with the Opioid Crisis” forum in Hampton last week. Fuller and Sprague shared their family’s personal story at the event. 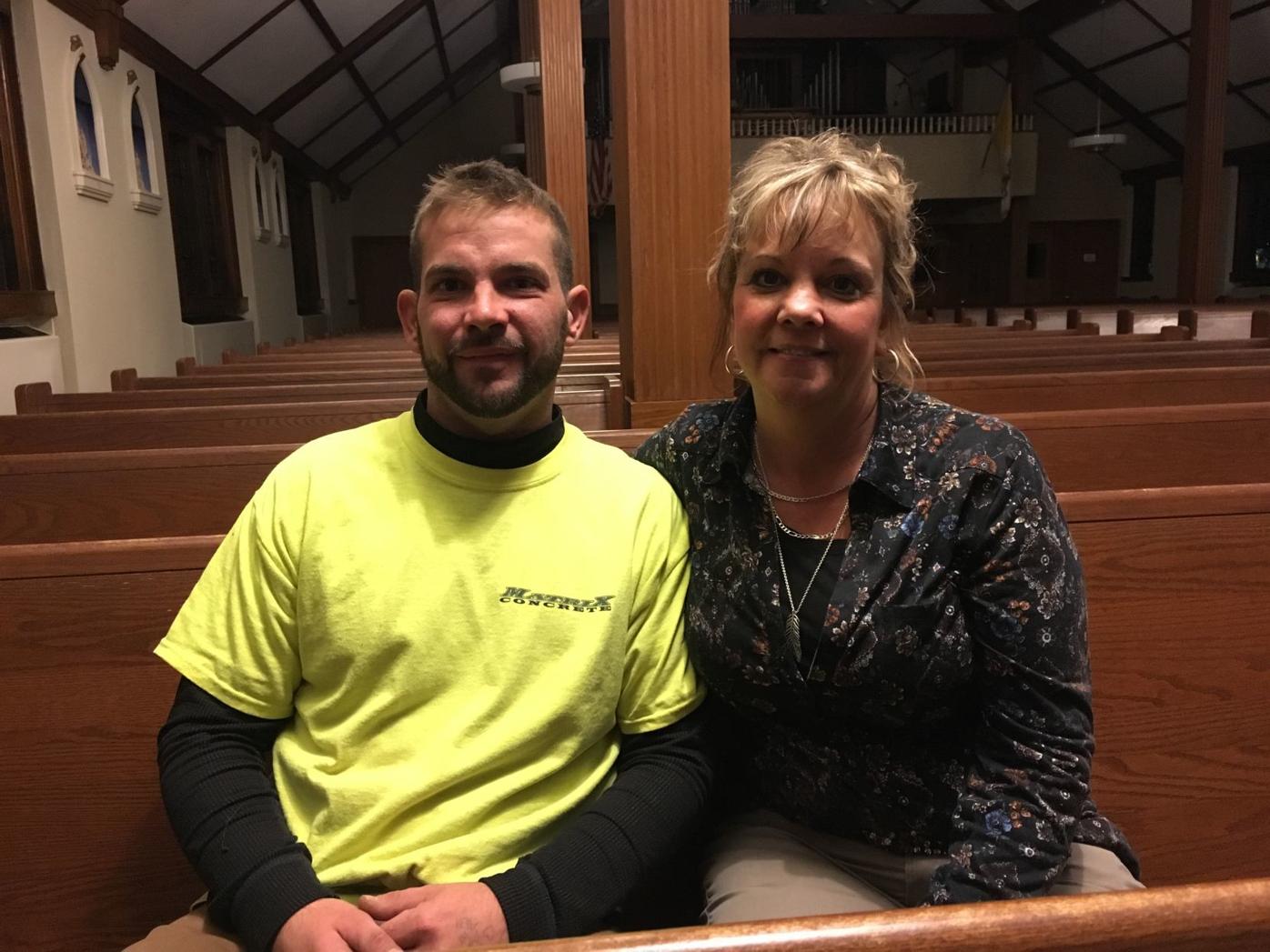 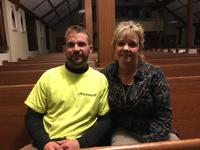 Chris Sprague and his mom, Lynn Fuller, recently spoke at a forum for parents hosted by Catholic Charities New Hampshire in Hampton. 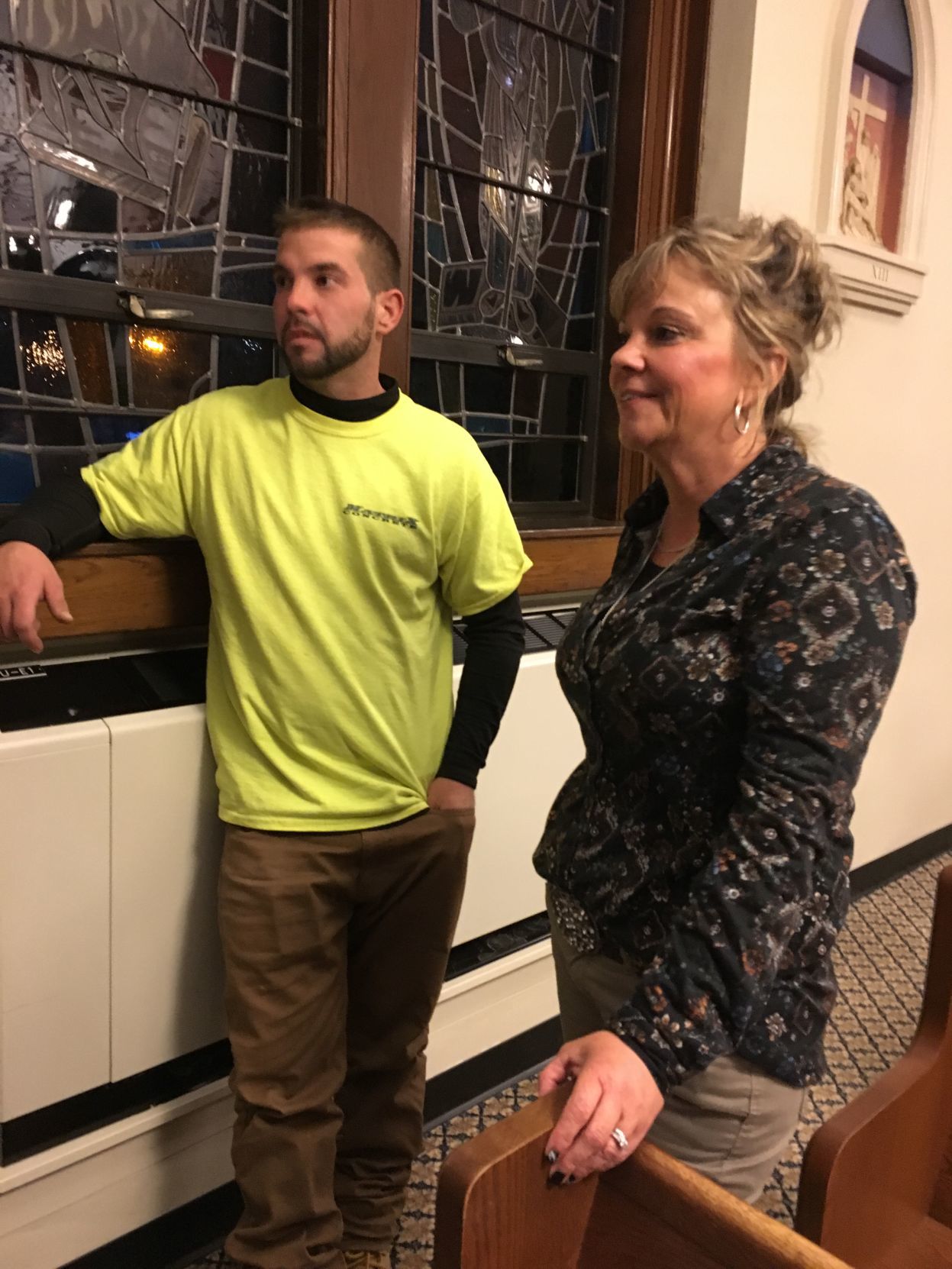 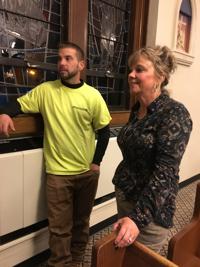 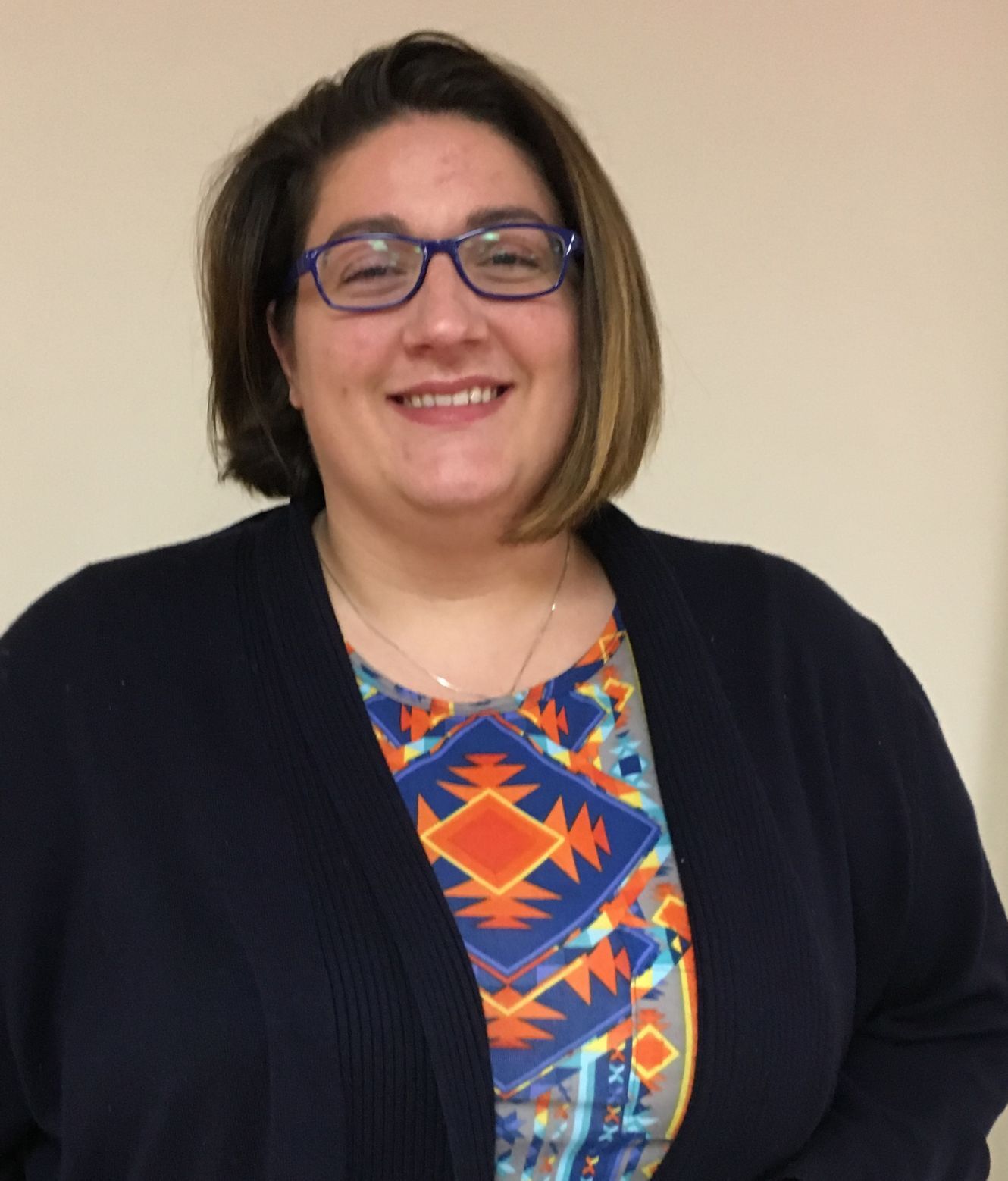 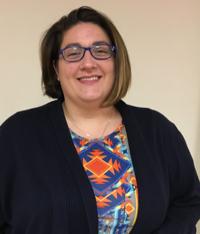 Diego Garcia, left, a junior at St. Thomas Aquinas High School in Dover, talks with Lynn Fuller, right, and Chris Sprague about a research project he’s doing on addiction after the “Families Coping with the Opioid Crisis” forum in Hampton last week. Fuller and Sprague shared their family’s personal story at the event.

Chris Sprague and his mom, Lynn Fuller, recently spoke at a forum for parents hosted by Catholic Charities New Hampshire in Hampton.

By his own account, Chris Sprague had a happy childhood. He grew up in a good home and vowed that he would never drink or take drugs. Then his father died and Sprague fell in with friends who did both. By the time he was in his mid-20s, he was addicted to opioids and had lost everything he held dear.

Lynn Fuller watched helplessly as her son plunged into the abyss of addiction. When she discovered Chris had broken into her home and stolen money, she made the heart-wrenching decision to have him arrested.

And that tough love, Sprague says today, “saved my life.”

Sprague and Fuller told their story of recovery and redemption in the basement of Our Lady of the Miraculous Medal Church in Hampton on Wednesday night. That’s where about 20 parents were attending a forum on “Families Coping with the Opioid Crisis,” hosted by Catholic Charities New Hampshire.

The Rev. John Mahoney Jr., director of clinical services for Catholic Charities, encouraged families to seek out support groups that can help them better understand and cope with loved ones struggling with addiction. Patrick and Susan McKeown, who co-facilitate a Manchester support group, shared the latest research and resources. And Danielle Capelle, a mental health counselor at Catholic Charities, talked about the importance of setting boundaries.

But it was Sprague and Fuller who had those in attendance nodding in recognition.

Sprague said he now believes it was the death of his father when he was 14 that triggered his addiction. “I would use to escape the reality of life,” he said. “Life’s hard for a teenager. You lose your father, life is hard.

“And when I partied, I didn’t feel those feelings.”

His drug use spiraled out of control, despite his efforts to quit, even after he became a father himself. “I couldn’t even get clean for my kid,” he said.

Fuller said she shares her family’s story to give others hope. “You can see that recovery is possible, and it does happen,” she said.

It was heartbreaking to watch her child become “a lost soul,” even as he resisted her efforts to help him, Fuller said. She learned the hard way not to give in when he asked for money for food or a bus ticket. She sought out information about addiction, and decided that she had to set boundaries for her son’s behavior.

Because it wasn’t just Chris who was hurting, she said. Addiction was threatening her marriage, her health, her other children, and her work.

Finally, Fuller got a no-trespassing order against Chris. “It broke my heart,” she said. “I had to learn to detach with love.”

When she discovered that a paper cup filled with change was missing from her kitchen cupboard, she checked the footage from a security camera and watched in disbelief as her son entered the house. He was “almost unrecognizable,” she said, a “broken, lost soul.”

She fell to her knees in prayer, she said. And then she called police and asked them to file charges against Chris. “I never dreamed, on the day I gave birth, I would ever file a felony charge against my own son,” she said.

Because he was charged with a felony, Sprague was eligible for drug court. And that finally gave him the motivation, and the resources, that he needed to find recovery, he said. “Once all the bridges are burned, all you’ve got is you,” he said. “And it’s hard to sit with yourself sometimes.”

He hated himself when he was in the depths of addiction, Sprague said. And here’s the hardest thing, he said: “You have to really learn to love yourself again.”

Sprague said most people need to rely on a higher power; for him, it was his religious faith that helped him find recovery.

And that has happened. Sprague, now 33, has been in recovery for three years.

Susan McKeown gave a slide presentation on how addiction alters the brain; young people are especially vulnerable to the effects, she said. But the brain can repair itself, she said, and people do recover. “There are 23 million people in this country who are in recovery,” she said. “Sometimes all we hear about are the ones we’re losing.”

Capelle offered advice for parents on setting expectations for behavior — and how to stop enabling someone in active addiction. It’s about “detaching with love,” she said. “Saying, ‘I love you, but I can’t be a part of your addiction anymore. That’s something you have to own.’ ”

It’s important not to engage someone when they’re under the influence, Capelle said. Instead, “Know what you want to say and say it in a calm and loving way,” she said. “You want to come to your loved one who is struggling, with empathy and love.”

And be patient, she said: “Recovery takes time, dedication and support.”

Patrick McKeown, who taught special education at Manchester Central High School for 41 years, talked about the physical, psychological and spiritual aspects of addiction. And he said sometimes the siblings of a drug user may need counseling to deal with justifiable anger and resentment.

If you know someone who has a loved one struggling with addiction, McKeown suggested, offer to accompany them to a support group meeting. “It’s very difficult to walk into a group of strangers and say, ‘My kid’s using drugs,’ ” he said.

“That would be such a kind thing to do this Christmas season,” he said. “You could change a whole family’s future in a huge way.”

Fuller said the first time she went to a support group, she found people who shared her fears and grief. “We live in shame, but we learn to put our heads up and talk about it and educate others,” she said.

She founded her own Circle of Hope support group where, she said, “We watch our people heal.” And she’s now the family support group coordinator for Granite Pathways.

The Hampton meeting was the tenth such presentation Mahoney has given across the state. The next is on Jan. 30 at Divine Mercy Parish in Peterborough.

Why is the church getting involved in this crisis? “We see this as engaging in the healing ministry of Christ,” Mahoney said.

Jesus didn’t spend all day in an office, or a church, he said. “He was actively engaged in the community’s problems, so that’s what we are doing,” he said. “This crisis has hit people from every socio-economic group and every faith tradition.”

He said he worries most about the families “who suffer in silence,” afraid to ask questions because of the stigma associated with addiction. “These silent people in the back row of our presentations are trying to reclaim broken family relationships,” he said.

That was evident in Hampton, where several parents, perhaps emboldened by Sprague’s and Fuller’s candor, asked poignant questions about dealing with their own loved ones’ addictions.

One mother said she’s afraid of what will happen if she stops supporting her child.

Another woman shyly asked Sprague if he still considers himself an addict. He does, he replied.

“You have to have your guard up all the time,” he said. “You’re never just cured.”

“You’re always an addict and you always have to fight that fight.”

Beyond the Stigma, a series exploring solutions to the state’s addiction and mental health challenges, is sponsored by the New Hampshire Solutions Journalism Lab at the Nackey S. Loeb School of Communications and funded by the New Hampshire Charitable Foundation, Dartmouth-Hitchcock Medical Center, NAMI New Hampshire, and private individuals. Contact reporter Shawne K. Wickham at swickham@unionleader.com.