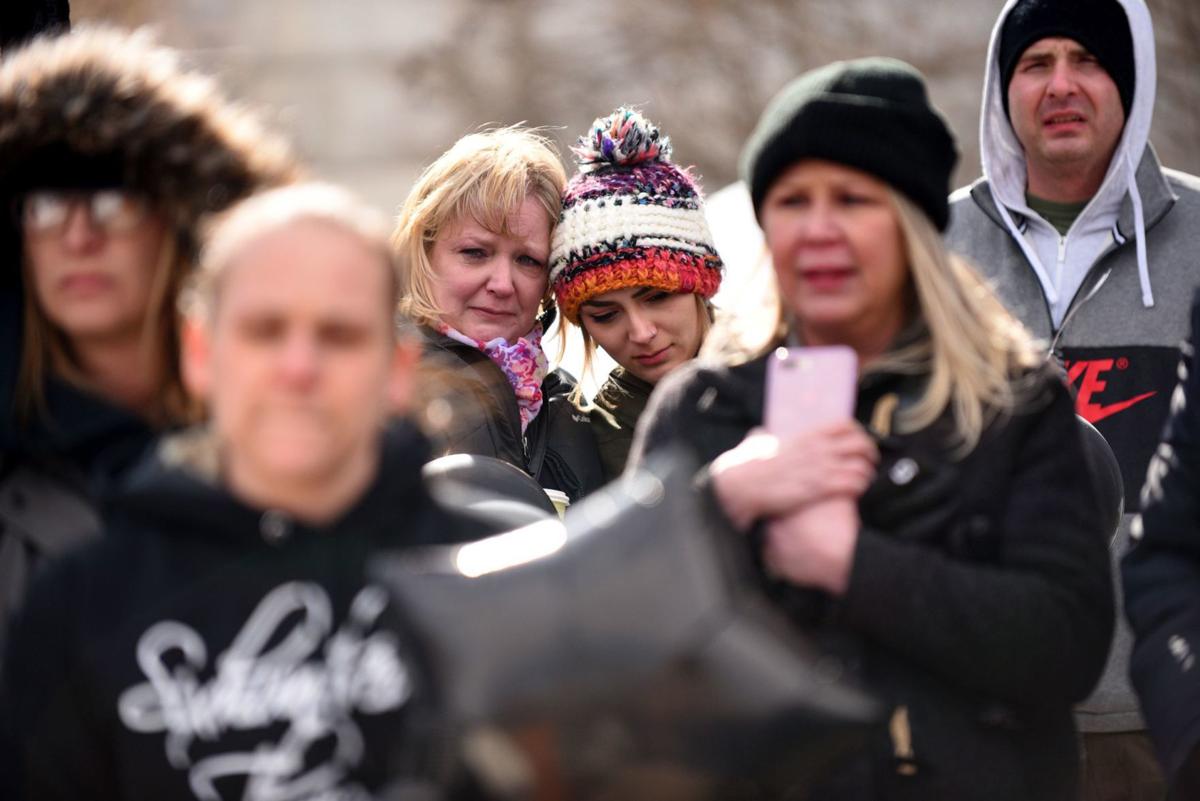 Suzanne Sepulveda of Center Barnstead and her daughter, Katie, lean their heads together in grief during a remembrance ceremony in front of the State House in Concord for lives lost to the opioid epidemic. Their son and brother, Mykel Obrenovich, died of an overdose last year. 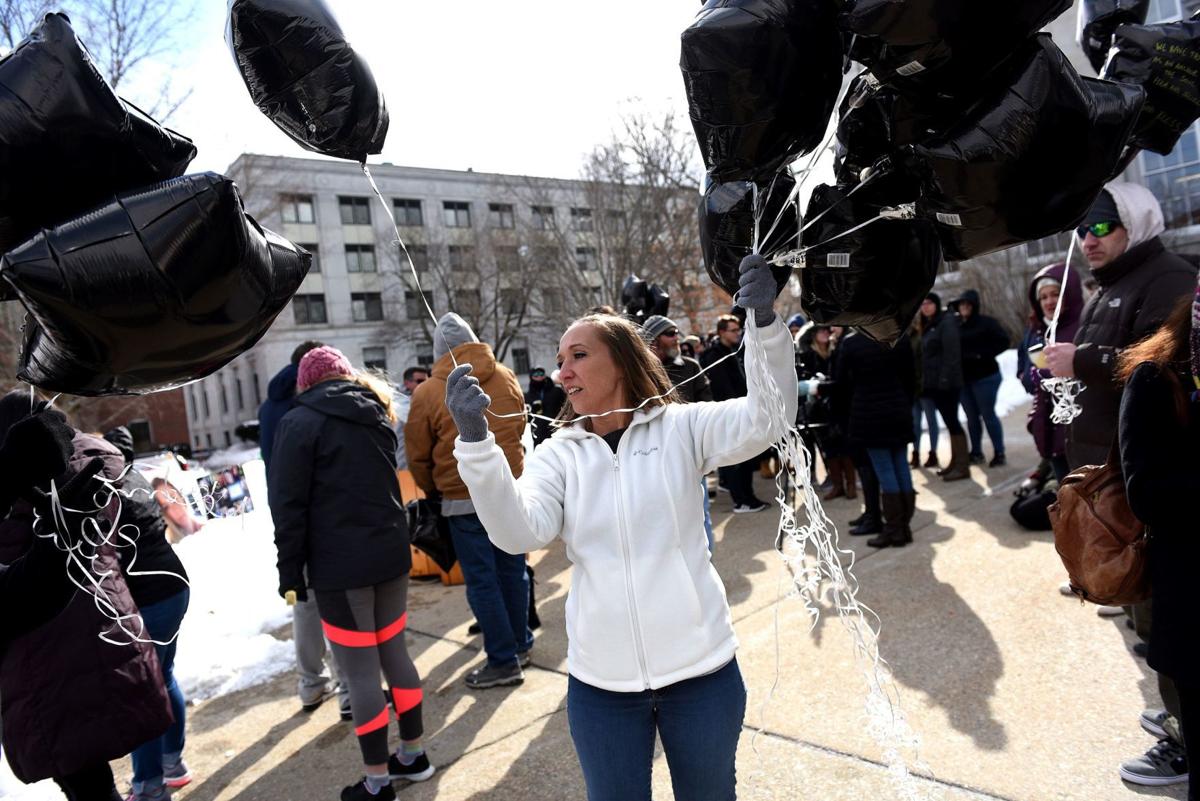 Sarah Haxhija passes out black balloons at a remembrance ceremony for lives lost to the opioid epidemic at the State House in Concord Wednesday. 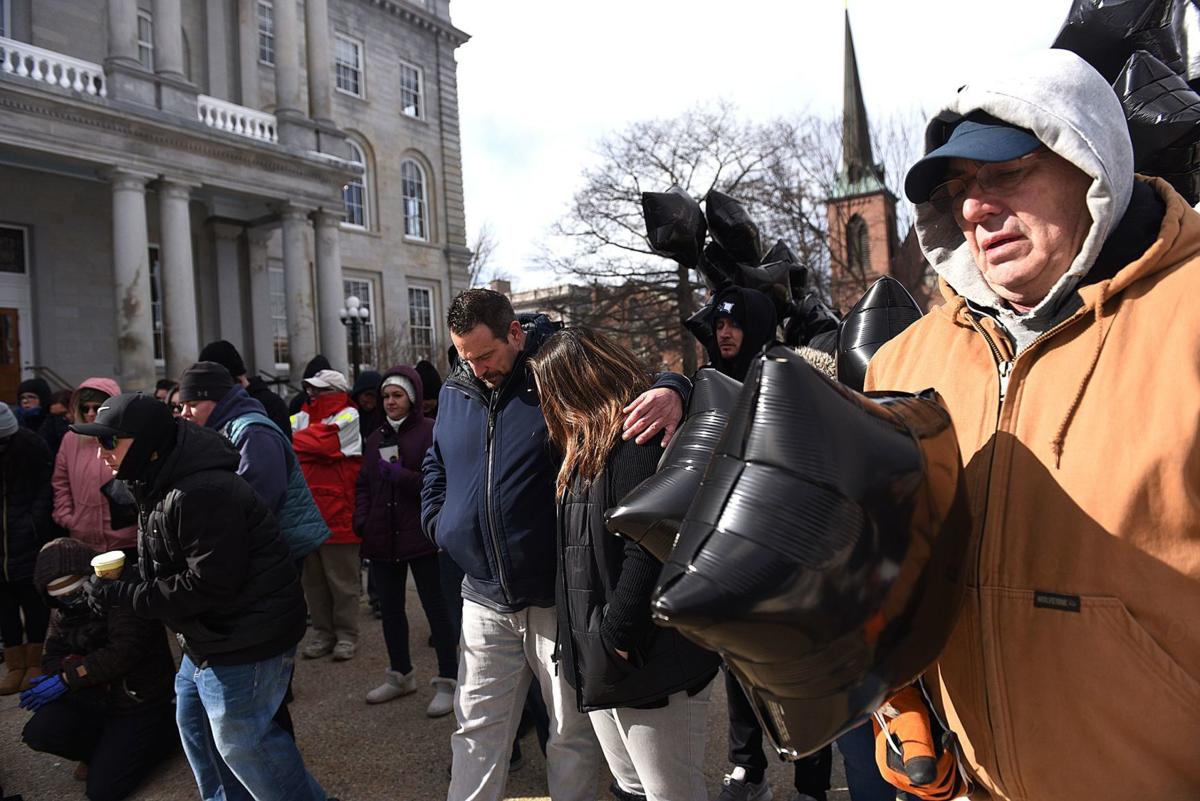 People bow their heads in a moment of silence at Black Balloon Day, remembering those lost to the opioid epidemic at the State House in Concord.

Suzanne Sepulveda of Center Barnstead and her daughter, Katie, lean their heads together in grief during a remembrance ceremony in front of the State House in Concord for lives lost to the opioid epidemic. Their son and brother, Mykel Obrenovich, died of an overdose last year.

Sarah Haxhija passes out black balloons at a remembrance ceremony for lives lost to the opioid epidemic at the State House in Concord Wednesday.

People bow their heads in a moment of silence at Black Balloon Day, remembering those lost to the opioid epidemic at the State House in Concord.

And, Lamontagne said, “The list goes on and on.”

Wednesday was Black Balloon Day, an event held to remember the daughters and sons, mothers and fathers, sisters and brothers, friends and co-workers who have died in an epidemic that each year kills more Americans than the entire Vietnam War.

With the March wind making the temperature feel like single digits, about 100 people gathered on the State House lawn, many carrying bunches of black balloons.

Shannan Landry, whose older sister, Tanita Landry, died of a fentanyl overdose in 2016, organized the event. She collected nearly 300 photos of individuals who have died in the epidemic, displaying them on posters.

Each photo “represents hundreds of broken hearts and unfulfilled dreams,” Landry said. “I couldn’t help but think about what these men and women’s aspirations were, who they loved and who loved them, and who they left behind.”

Seven years into the state’s opioid epidemic, the ripples of loss and pain still spread across New Hampshire.

Conor O’Keefe of Concord told the crowd that his mother became a heroin and fentanyl addict after 30 years of abusing prescription pain medication following surgery. He, too, started using drugs in his youth.

But while he found recovery and sobriety, his mother did not, he said. “Even seeing her son and former using partner now living a sober life was not enough to convince her,” he said.

Gov. Chris Sununu offered brief remarks, commending the families of those who have died for fighting for more treatment resources. “It’s your stories that help drive better policy,” he said.

The governor, along with his adviser on addiction and behavioral health, David Mara, then stayed for the duration of the event, listening to some of those very stories.

Former state Rep. Phil Spagnuolo of Laconia said he’s lucky that he’s not one of the people in the photographs on display.

“I walked out of the Billerica House of Corrections in January of 2016. Exactly two years later, I was elected to serve the state of New Hampshire in the House of Representatives,” he said, and the crowd applauded.

“What that told me was that my community believed that people in recovery had something to say and they were finally willing to listen,” he said.

Lamontagne, who is in long-term recovery and is director of outreach at Blueprint Recovery Center in Concord,, said New Hampshire has made progress on dealing with the opioid epidemic. But she said there are still not enough treatment resources for people to get help right away.

She challenged the crowd to get educated, volunteer to help and use their voices to demand change. “This is your community,” she said. “Make a difference and stand up for what you believe in. Be persistent, and be so loud that they have no choice but to hear you.”

Shannan Landry said her sister was in recovery for a while and attended a national rally in Washington, D.C. in the fall of 2015. After Tanita died, a friend who had gone to the rally with her, Zachary O’Brien, posted a video of her singing “Time,” an original song about addiction, on YouTube(https://www.youtube.com/watch?v=t9wxB63aL4E).

Landry said she’s watched her sister’s video thousands of times. “It’s one of the only places me and my family can ever see her face anymore,” she said.

Jessica Wheeler of Manchester brought a poster to the Concord event showing the faces of 21 friends who have died from drug overdoses. Wheeler, who has been in recovery for two years, said she came to show support for the families, and for others in recovery. “We are all in this together,” she said.

There are more photos to add to her poster, Wheeler said. “Sadly, it’s the reality of our state right now.”

Eric Ritchie of Hampton held a bouquet of balloons in memory of his friend, MacKenzie Dewer. One balloon read, “RIP ‘Mac’/Love ya always.”

A second balloon said only: “Too many to name. May you rest in the sweetest peace.”

Ritchie has been in treatment for a month, he said. Nodding at the photos on display, he said,

“They had to lose their lives for us to get sober.”

Landry asked those in the crowd who, like her, are in recovery to be “trailblazers.”

“We need to tell and show people that recovery is possible and that we have found a new way of life and health,” she said. “We need to extend our hand to those who are still sick and suffering, and show them the way out.”

“We need to be beacons of hope and strength,” Landry said. “We memorialize these lives here today by living ours.”