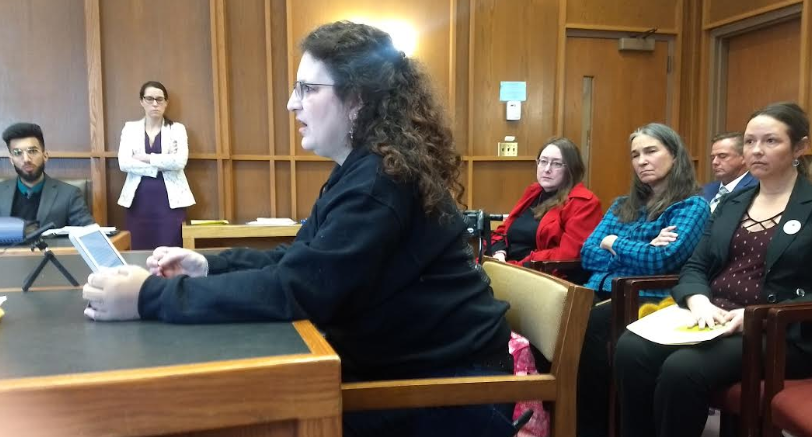 Jen Coffey of Manchester, who suffers from a rare, debilitating disease, urges a Senate committee to support changing prescribing rules that threaten to reduce or eliminate patients from getting prescription opioids. The panel heard from several patients who said their unrelenting pain had them contemplating suicide. 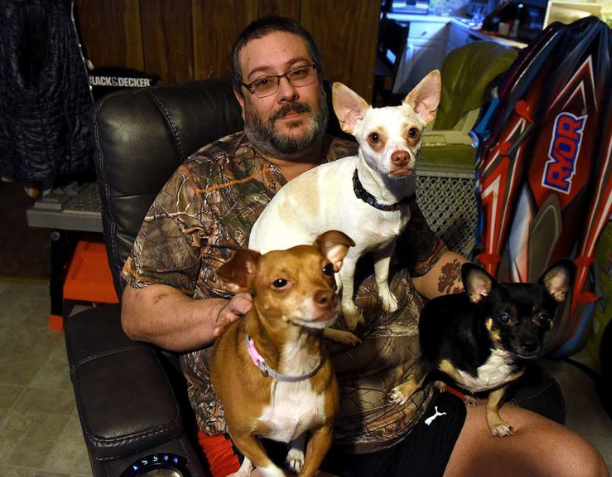 Christopher Sounia of Hooksett, seen here in a January 2019 photo for a New Hampshire Sunday News profile, came to the State House this week to urge lawmakers to change opioid prescribing rules that threaten to reduce or cut off painkillers to patients like him with chronic pain. 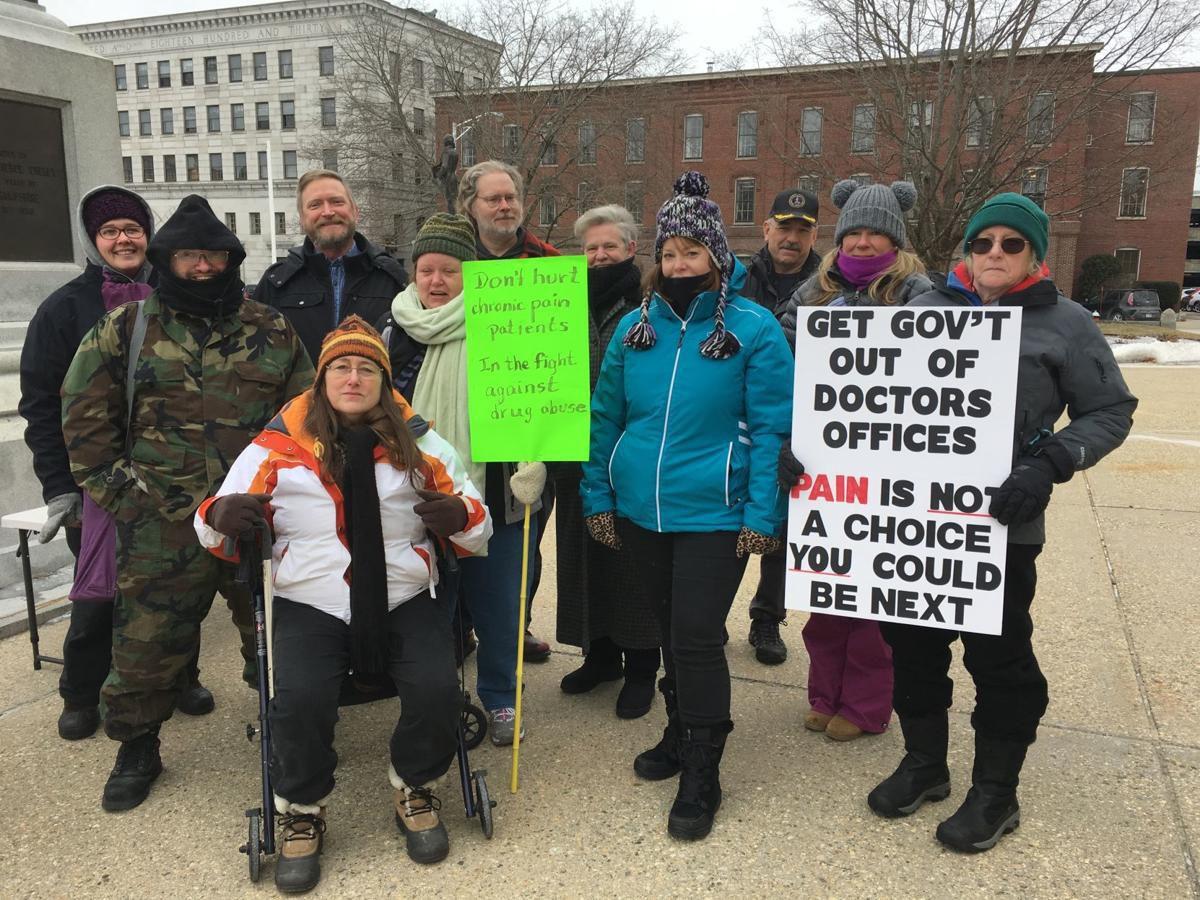 Jen Coffey of Manchester, who suffers from a rare, debilitating disease, urges a Senate committee to support changing prescribing rules that threaten to reduce or eliminate patients from getting prescription opioids. The panel heard from several patients who said their unrelenting pain had them contemplating suicide.

They embraced a groundbreaking bill (SB 546) aimed at protecting these patients and the doctors who treat them by allowing each provider to “administer care sufficient to treat a patient’s chronic pain based on ongoing, objective evaluations of the patient without fear of reprimand or discipline.”

The legislation would free doctors from having to stop or restrict medication like opioid painkillers based on pre-determined guidelines from the Centers for Disease Control and Prevention that New Hampshire and many other states have adopted into their own rules.

Jen Coffey of Manchester suffers from reflex sympathetic dystrophy or complex regional pain syndrome that she said is often called the “suicide disease” because many of its sufferers can’t live with the pain.

“I don’t want to die. I really don’t want to but I don’t want to merely exist for my parents and son to watch me lose the little dignity that I have left,” Coffey said, choking back tears while testifying Wednesday.

“The treatments I am taking are experimental and they could be taken away from me,” Coffey said.

“Cancer is not the worst thing that could happen to you,” she said. “Take that from me, please.”

“Doctors should be able to prescribe without fear of reprimand.”

Christopher Sounia of Hooksett struggles with “high-impact chronic pain” from severe injuries he suffered 25 years ago when a drunken driver struck the limousine he was driving on Interstate 495 in Massachusetts.

“If it wasn’t for my wife and pain advocate I wouldn’t be here,” Sounia said, sobbing.

“My doctor is rated as the highest opioid prescriber in the state. You shouldn’t punish someone for doing good.”

“What this does is to give the provider the safety of protection under law from being accused of being a drug pusher. This policy has dampened the enthusiasm for treating pain patients,” Reagan said.

The guidelines on restricting opioids here arose from the addiction crisis in 2017, after New Hampshire’s opioid death rate per capita rose to one of the highest in the nation.

The New Hampshire Board of Medicine rules specifically for opioid prescribing took effect in 2017. For emergency departments, urgent care or walk-in clinics, providers should write opioid prescriptions of three or fewer days in most cases but no more than seven days, the rules state.

Physicians are to “prescribe for the lowest effective dose for a limited duration” for chronic pain, defined in these rules as pain that persists beyond the usual course of an acute disease or healing of an injury, or a condition that causes intermittent pain over months or years.

Providers must consult with an “appropriate specialist” when a patient receives a dose equivalent to 100 “morphine milligram equivalents” (MME) for longer than 90 days, the rules state.

State Rep. Ralph Boehm R-Litchfield, said his daughter had been going to a pain clinic for 15 years.

“In the past year these medications have been reduced to a point where she has been bedridden,” Boehm said.

“We are forcing people to go buy heroin on the street. Let’s not hurt the people who really need the medicine. Fix this lunacy and stop forcing patients to live in pain.”

Bill Murphy of Manchester is an advocate who helps chronic pain patients.

“Doctors are afraid of prescribing opioids as one of the tools of dealing with chronic pain management,” Murphy said.

All the supporters said they are willing to endure the current preconditions for getting these large opioid doses. These can include random drug tests and pill counts by health care providers.

No one spoke in opposition to Reagan’s bill, though Kathleen Bizarro-Thunberg, executive vice president of the New Hampshire Hospital Association, urged the Senate panel to alter language she said would tie the hands of providers because the bill says they “shall treat” and “must” dispense all medications.

“This contradicts what they would normally do as a provider or pharmacist,” Bizarro-Thunberg said.

“We think we can continue to work with the sponsors to find the right place to make that change happen.”Key player welcomes reviewSen. Tom Sherman, D-Rye, played a leading role in crafting these rules that played a part in New Hampshire leading the nation in the decline of opioid prescribing.

He said it could take time to rewrite those rules but this bill invites a necessary review.

“I see it as a really huge opportunity to revisit this issue and see if we need to do something more,” Sherman said.

Bobbie Blades of Concord hopes lawmakers will act as someone who lived with rheumatoid arthritis for a generation until four years ago when it got so painful she couldn’t move.

“Opioid pain medication was prescribed. They discharged me and then immediately reduced my pain medication. Going to the pharmacy to pick up the drugs, they held us up for over an hour just because once I was given a muscle relaxant years ago,” Blades said.

“It is sad when people can’t get the pain relief that they need.”

Advocates say proposed legislation would protect chronic pain patients — and the doctors who care for them.

Armed with hot coffee and signs, about a dozen chronic pain patients braved temperatures in the teens and an impending snowstorm to rally outs…

Chronic pain patients say they have been silent victims of the deadly opioid epidemic, as doctors and insurers decide to “taper” their prescri…

Beyond the Stigma: Chronic pain is the other side of the opioid epidemic

Chris Sounia’s spine was crushed and his leg shattered when a drunken driver going the wrong way on I-495 in Massachusetts crashed head-on into the limousine he was driving.

Chronic pain patients: The baby with the bathwater?

Patients who have relied on prescription painkillers say they have been caught up in well-meaning, but misguided, efforts by government agencies, doctors, pharmacists and insurance companies to reduce the amount of opioids being prescribed.