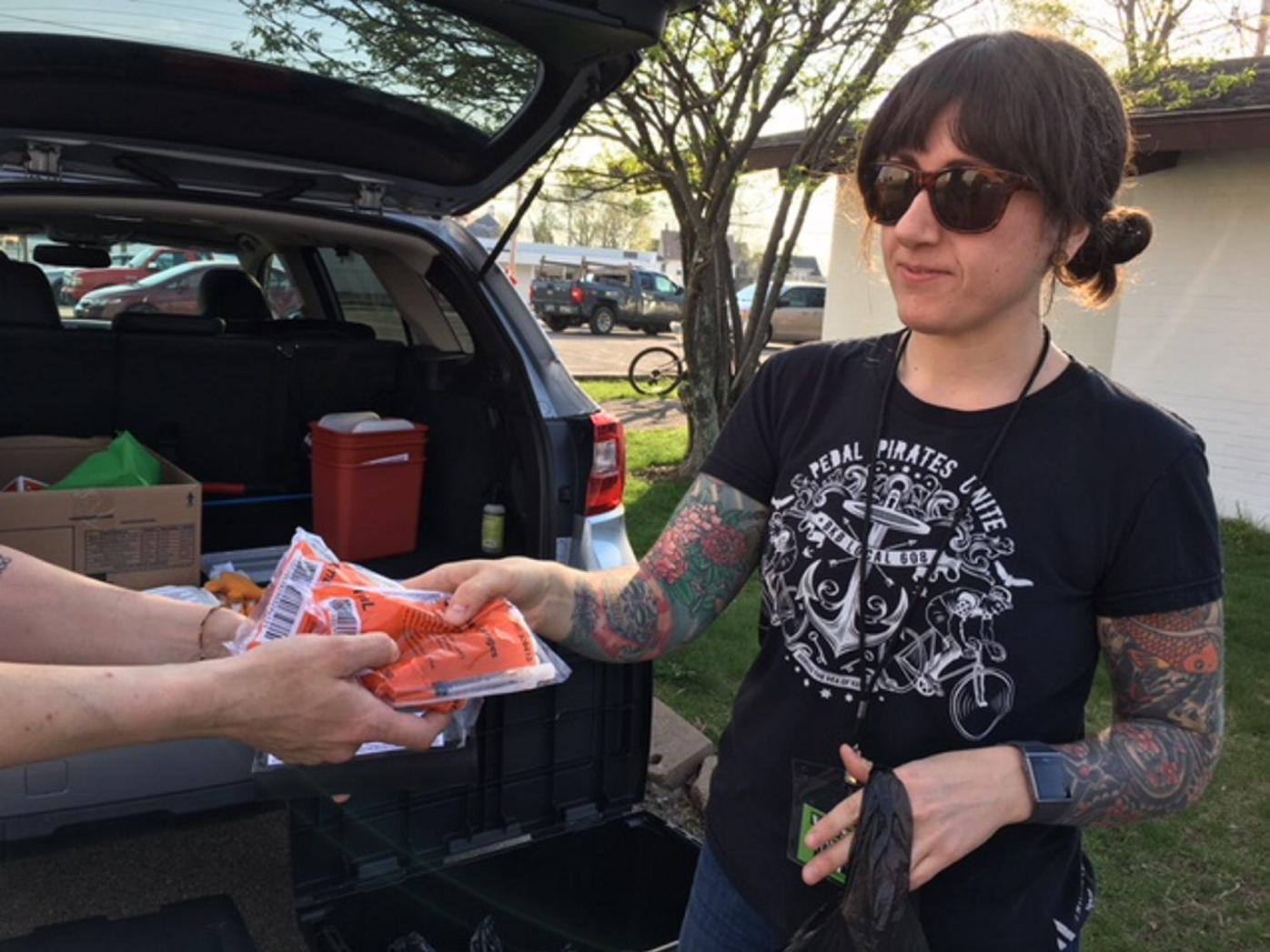 Emily Runyan, a nurse who volunteers for Hand Up, gives new syringes to a program participant on a recent Friday in Rochester. 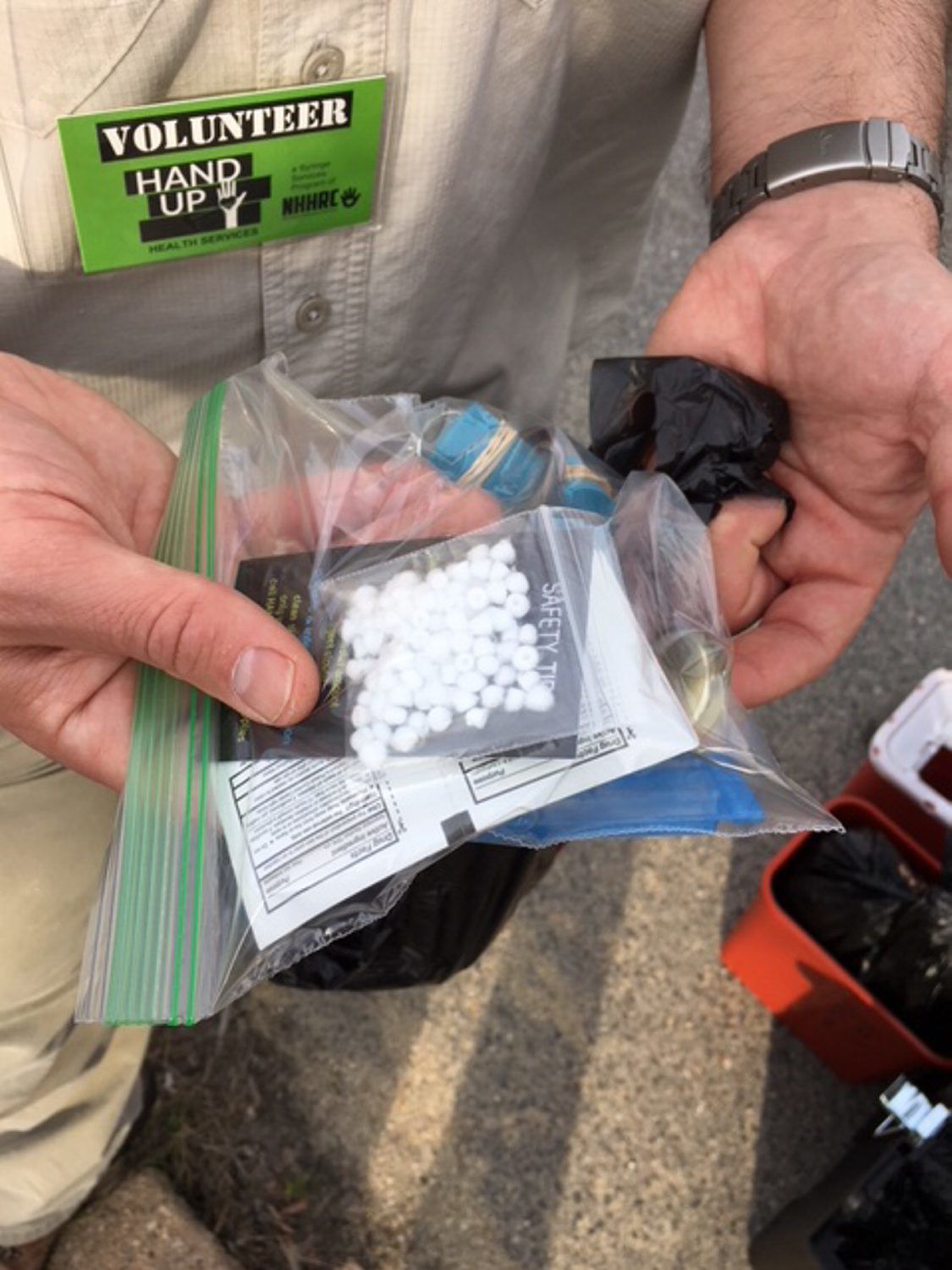 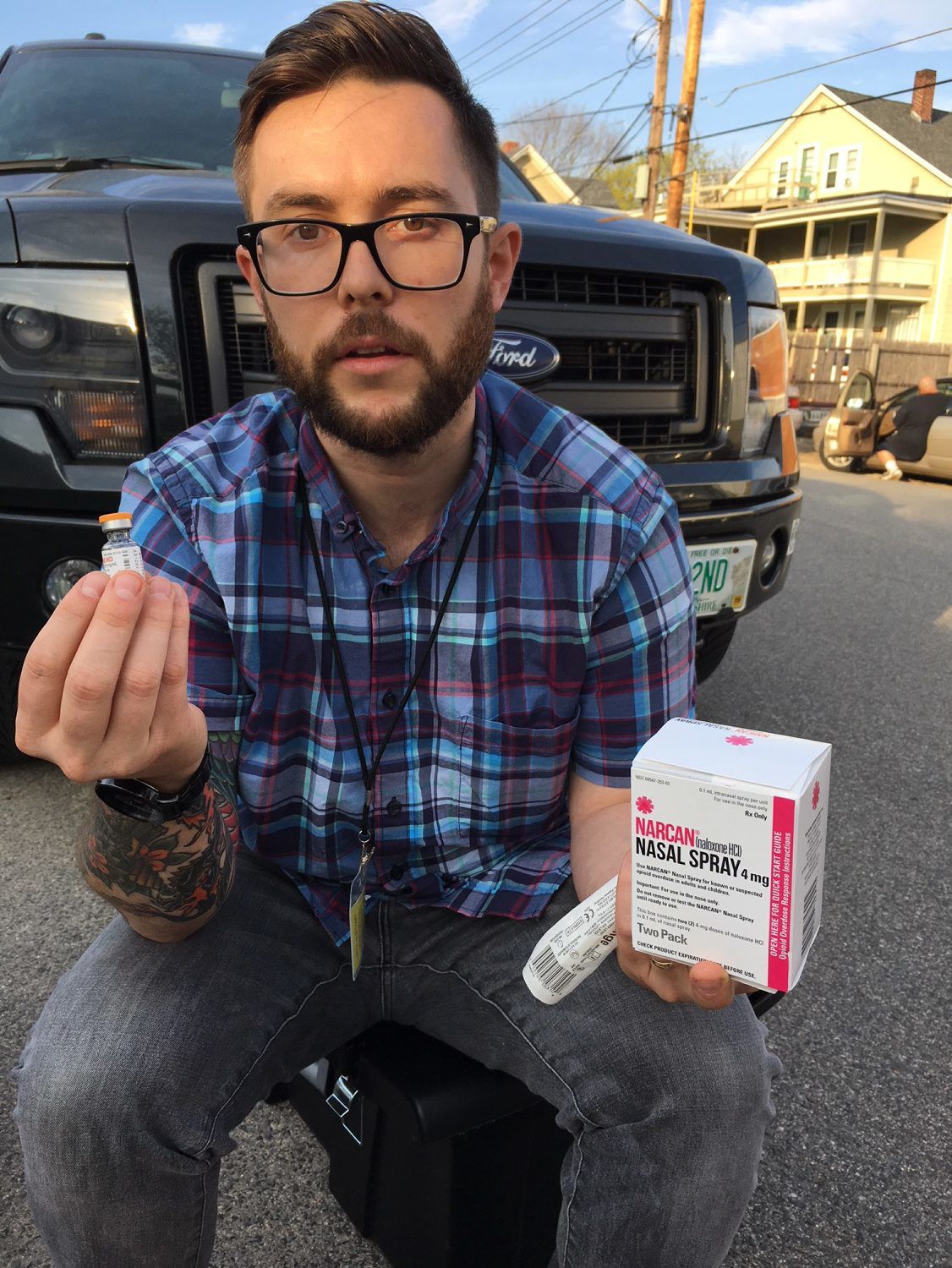 Dean LeMire, a founder of Hand Up, displays Narcan, an overdose reversal drug that the program distributes. 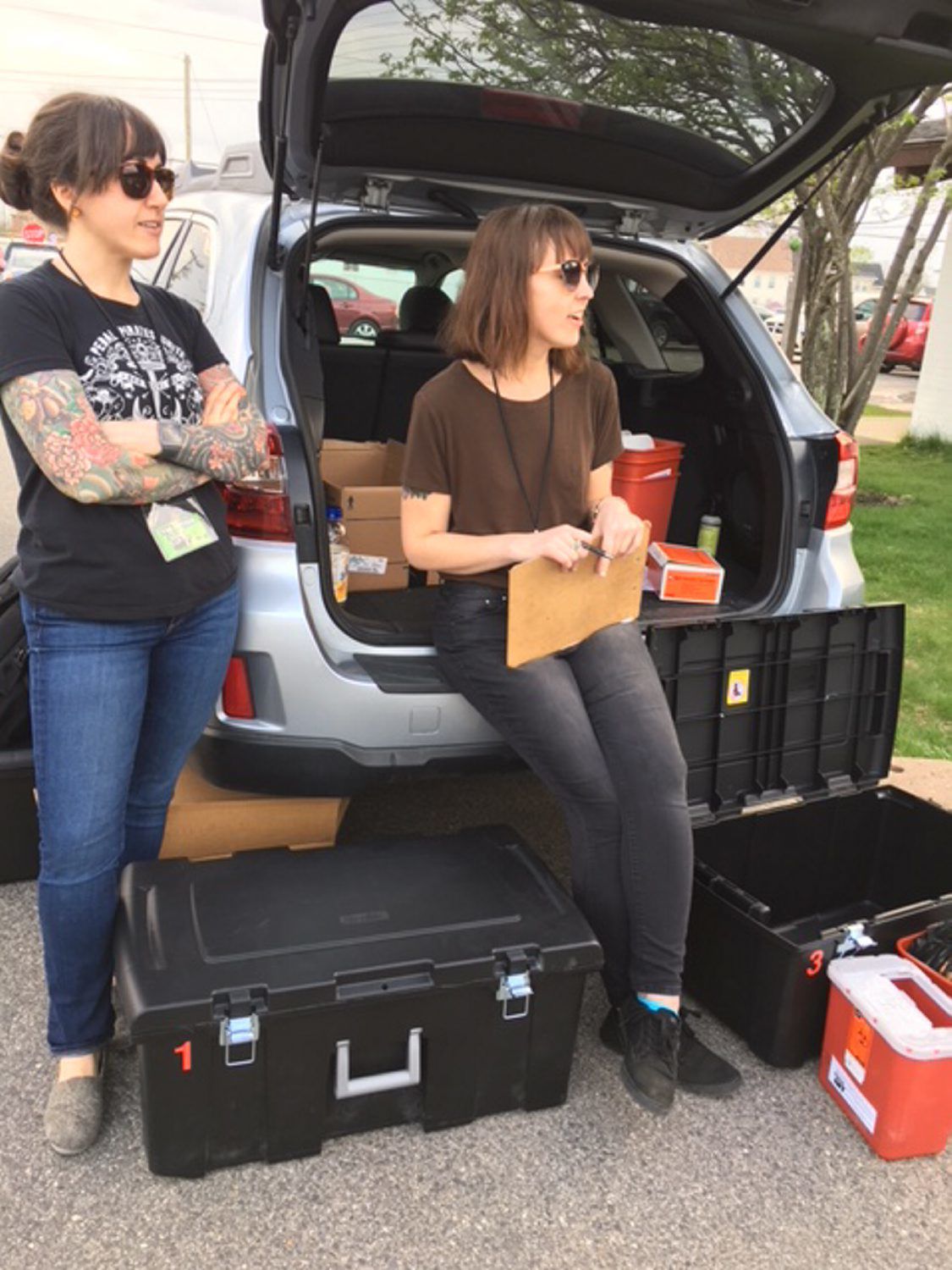 Emily Runyan, left, and Emily Edgerly are volunteers for Hand Up Health Services. They distribute free syringes and other supplies and collect used syringes in Dover and Rochester. 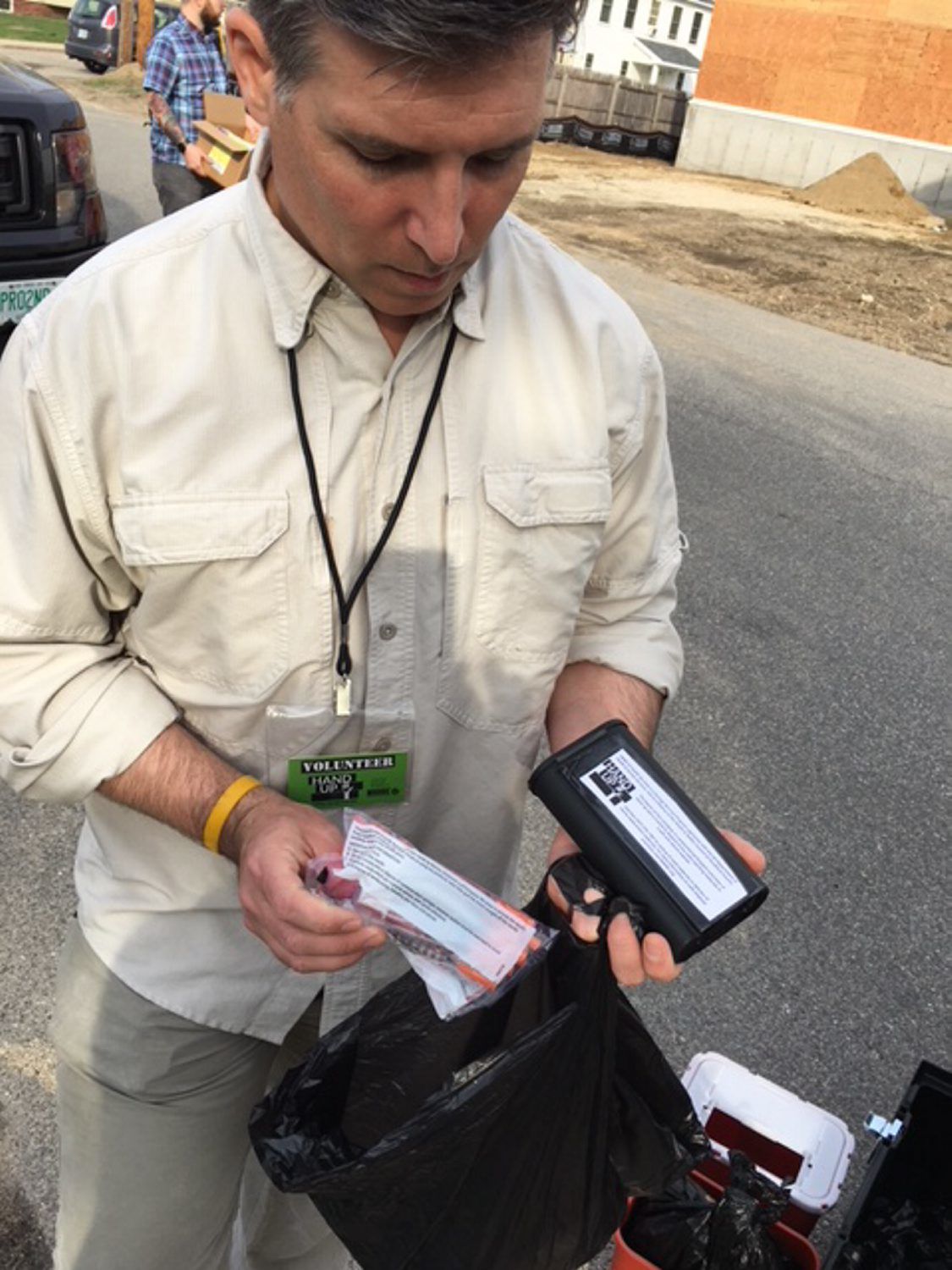 Dr. Joe Hannon is a former state representative who sponsored a 2016 bill to create syringe services programs. That turned into a study commission that led to the 2017 law. 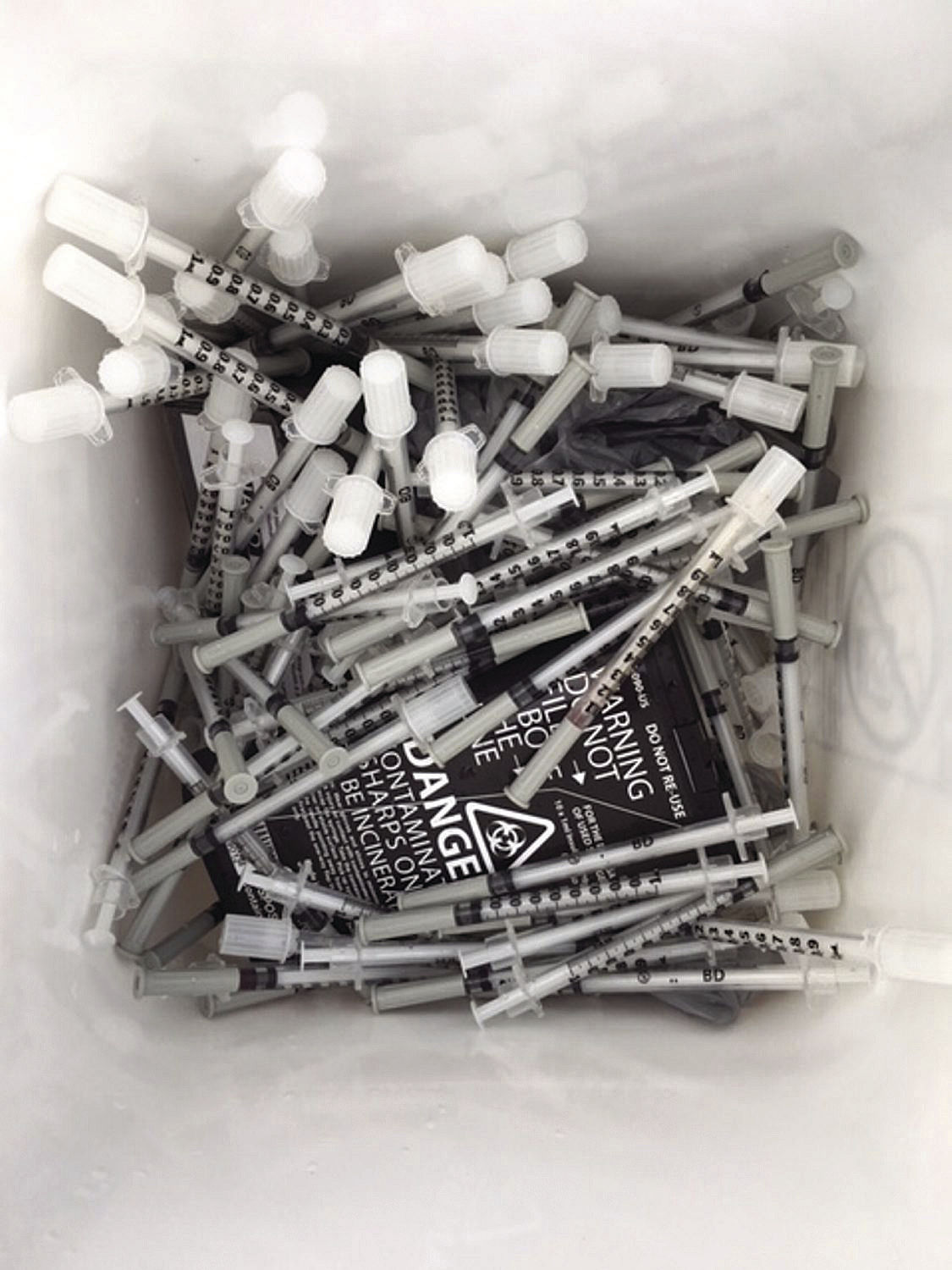 Used syringes are collected by volunteers with the Hand Up syringe services program in Dover and Rochester. They'll also meet with people who are afraid to come to a public site.

Emily Runyan, a nurse who volunteers for Hand Up, gives new syringes to a program participant on a recent Friday in Rochester.

Dean LeMire, a founder of Hand Up, displays Narcan, an overdose reversal drug that the program distributes.

Emily Runyan, left, and Emily Edgerly are volunteers for Hand Up Health Services. They distribute free syringes and other supplies and collect used syringes in Dover and Rochester.

Dr. Joe Hannon is a former state representative who sponsored a 2016 bill to create syringe services programs. That turned into a study commission that led to the 2017 law.

Used syringes are collected by volunteers with the Hand Up syringe services program in Dover and Rochester. They'll also meet with people who are afraid to come to a public site.

ROCHESTER -- It's suppertime on a Friday evening and the Salvation Army is serving a community meal. Outside, people are stopping by a car with its hatchback open, picking up supplies for the coming week.

This is Hand Up Health Services, one of two syringe services programs (SSPs) operating in New Hampshire. Over the course of the evening, 32 people will stop by, chatting with program volunteers, turning in used needles and picking up clean supplies.

After years of argument, lawmakers here last year made it legal for health centers, public health networks and community organizations to operate what some call "needle exchange" programs. Advocates here don't use that term, since it implies that people have to bring in used needles to get clean ones.

That's not how it works.

As individuals - they call them "participants" - approach, the Hand Up volunteers ask a few questions: age, hometown, "drug of choice," and what supplies they need. They give one man 50 syringes. "Can you give me more for my lady?" he asked. "She's too embarrassed to come."

Another man asked for Narcan, the overdose reversal drug. "Nasal or injectable?" asked Emily Runyan, a nurse at a community health center who volunteers for Hand Up. "I get injectable," he replied.

"You know how to use this?" she asked. He does.

"Do you have any of those little black boxes?" someone else asked. Runyan hands him a container to dispose of used needles. He thanks her and leaves.

Most people bring these containers back each week; others drop used syringes into a plastic bucket. The team records how many come in and how many clean syringes, kits and Narcan doses they give out.

People who inject drugs "are the modern-day lepers of our society," said Emily Edgerly, a licensed drug and alcohol counselor from Dover who also volunteers for Hand Up.

And she said, "It's naive to think if someone didn't have access to syringes, they wouldn't inject drugs. They would just be sharing."

Volunteers share information about testing for HIV and hepatitis C, preventing infections and overdoses, and treatment resources. "They need to be safe," Edgerly said. "By reducing stigma, we can help people."

"People talk to flowers to help them grow. If you talk to people, it can help, too."

No state money is spent on SSPs, but programs have to register with the state health department and submit quarterly reports.

Hand Up is run by the New Hampshire Harm Reduction Coalition (NHHRC) with volunteers and grant funding. It currently operates in Dover and Rochester, but organizers hope to expand; they're seeking donations and new volunteers.

A third program, started last year by Dartmouth medical students in Claremont, was suspended because it was operating too close to a school, contrary to the state's SSP law. Lawmakers just passed a bill that allows local school boards to grant exemptions to that rule and organizers hope to restart the Claremont program this fall.

Kerry Nolte is an assistant professor of nursing at the University of New Hampshire, a nurse at a community health center and vice chair of the NHHRC. She worked with SSPs in Boston during nursing school and helped start Hand Up.

In her view, "Syringe services is really true compassion, in meeting people where they're at," she said.

Providers don't expect people with other medical conditions, such as diabetes or obesity, to change their lives overnight, Nolte said. But she said, "That's sort of what our current treatment model is, going from treatment to sobriety. We make it sound like it should be easy."

"Luke [not his real name]," 26, has been coming to Hand Up for a couple of months. "It's a lot safer to get clean needles than to keep on using the dirty ones," he said. "I think it's phenomenal that they set this up."

Dean LeMire, a founder of Hand Up, is in recovery himself. He said they encourage "secondary" exchanges, with participants dispersing clean syringes to other users and collecting used ones. "That's how you can reach the most people more quickly," he said.

"They know all the people I don't," he said. "I've been out of the game for six years."

There's still stigma around coming to a program like this, LeMire said. So they do "house calls," meeting up with people who are reluctant to come to a public setting, he said.

One woman tells the volunteers she tried to convince her friends it's safe to come. "I keep telling them if you can go downtown and pick up drugs, you can come here," she said.

"Dee," 39, said she was "a little nervous" at first to come to Hand Up. But once she met the team, she felt more comfortable.

"There is a stigma and a little bit of a stereotype," she said. "I think if people were more educated, they wouldn't judge."

She said she appreciates the information about preventing HIV and hepatitis C; it's a constant risk for people who inject drugs. "I worry every day," she said. And if she were ready to seek treatment, she said, "I'd go to these guys first."

A participant who hadn't been around for a while recently called to say she was in a treatment program, Runyan said. "It feels great," she said. "We want to lose customers."

Dr. Joe Hannon is a former state representative who sponsored a 2016 bill to create SSPs. That turned into a study commission that led to the 2017 law.

Now Hannon is a Hand Up volunteer. He said building trust was a challenge early on. "I look like a cop," he joked.

"The most important thing is being non-judgmental. They get plenty of judgment wherever they go," Hannon said. "Our goal is to make people safe."

According to the Centers for Disease Control and Prevention, people who inject drugs are five times more likely to enter treatment if they connect with an SSP.

And advocates say there are other benefits to the community. At an Earth Day community cleanup in Rochester, Hand Up volunteers were available in case any used needles were found, to safely dispose of them, Nolte said. "None were found."

Tuftonboro Police Chief Andy Shagoury is president of the New Hampshire Association of Chiefs of Police. He served on the study commission that led to the SSP law that passed last year.

Shagoury said he understands the value of SSPs in reducing risks from blood-borne pathogens and infections. "It's about harm reduction and trying to minimize the impact on people who are already adversely affected by drug addiction."

But he wonders whether communities that have such programs will attract people from other areas, noting people from around the state go to Manchester for its Safe Station program. "It's all good intentions, but sometimes there are other effects," he said.

Shagoury said it's "too soon to tell" what the impact of the new SSP law will be on the state's drug epidemic. "I get it all, but I don't know that it's going to be the answer to the opioid crisis so much as putting a Band-Aid on a wound that we already have," he said.

After two hours, the Rochester volunteers have given out 2,800 syringes and collected about 1,400 used ones. Edgerly is explaining Narcan to a new client: "Use it once. If they don't wake up, give them another one."

"Hope to see you next Friday," she tells him. "That's wishing bad luck on me," he replies with a grin. Then he says, "Better safe than sorry."

"Luke" comes by again to say good night to the team. "Take care," Edgerly tells him. She points to his cigarette: "Those things will kill you."

He heads off into the night.

CONCORD — Advocates battling domestic violence had plenty to celebrate Monday as Gov. Chris Sununu signed a trio of bills expanding the rights of victims and closing a major loophole in criminal law.

Nashua’s Safe Station program is coming to an end, according to the city’s fire chief.