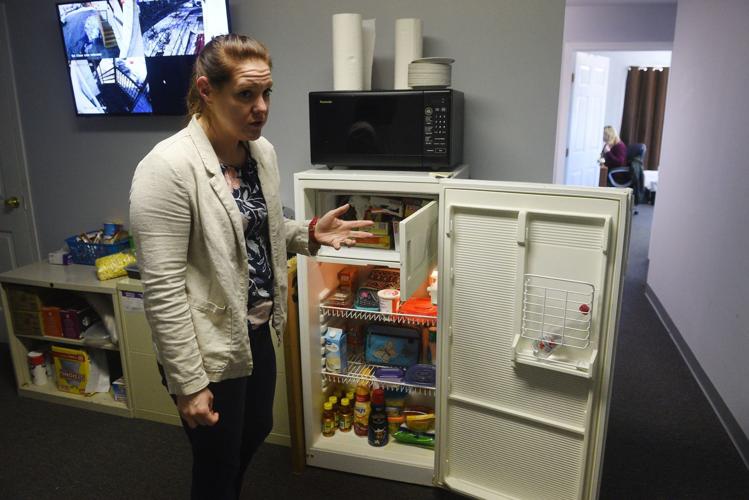 Kim Haney, director of The Doorway at Granite Pathways, shows a refrigerator stocked with snacks for clients at the Manchester hub. 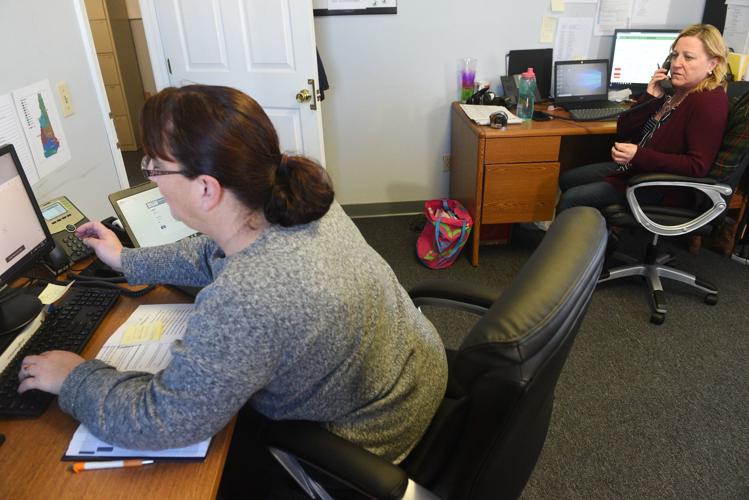 In the first three months since The Doorway — the state's new "hub-and-spoke program" for substance-use disorders — opened, more than 1,400 people have sought help there.

That number includes both people seeking direct services, and family or friends looking for information about how to help a loved one, according to statistics from the state Department of Health and Human Services. There were 1,011 individuals seen in person, and 592 accessed The Doorway by calling the 2-1-1 helpline (some did both).

Statewide, The Doorway staff have provided 631 clinical evaluations and made 776 referrals to treatment in those first three months. And while most clients came seeking help for opioid addiction, others reported their drug of choice as alcohol, methamphetamine, cocaine or marijuana.

Chart: Clients served by The Doorway

It's no surprise that the Manchester hub, run by Granite Pathways, has served the most clients since it opened: 189 in January, 177 in February and 205 in March.

The second-busiest hub is at Wentworth-Douglass Hospital in Dover, which assisted 87 clients in January, 56 in February and 56 in March, according to DHHS statistics.

State officials created The Doorway after receiving a two-year grant of nearly $46 million from the federal Substance Abuse and Mental Health Services Administration (SAMHSA) to combat the opioid epidemic.

Facing tight deadlines tied to that federal State Opioid Response grant, health department officials had to scramble to get the new program up and running by Jan. 1.

They created nine hubs across the state that provide screening for substance-use disorders, referrals to treatment programs and case management for ongoing recovery services. And they made the state's 2-1-1 helpline a central portal for people seeking help.

The "spokes" of the new system are the community providers that offer treatment services, recovery programs and other support. In some parts of the state, that piece of the program will take time to build up, according to those working on the front lines.

Jake Leon, director of communications for DHHS, likens the process to "building a plane while you're flying it."

DHHS recently submitted a proposal to SAMHSA for additional State Opioid Response funding to expand spoke services, including residential treatment; transportation and child care to enable clients to participate in treatment services; housing vouchers; and naloxone (the overdose reversal drug). The state is eligible for an additional $11.9 million to continue its fight against the opioid epidemic.

Next month, the health department also plans to revive its "Anyone Anytime" campaign to raise public awareness of resources available in the state for anyone struggling with substance-use disorders. That will include information about The Doorway, as well as the availability of naloxone and safe storage of prescription medications, Leon said.

A single place for help

Kellie Mueller, director of behavioral health at Wentworth-Douglass, said the hub there has been seeing a lot of walk-ins and fielding a lot of phone calls from family members. She said The Doorway offers these people a single access point to ask for help, something that was lacking before.

"Sometimes that obstacle is big enough that people just won't reach out," she said.

Mueller said the assessments done at the hub identify clients' needs and try to connect them to the right resources. However, she said, "The challenge we face is that right resource isn't necessarily available."

Three months into the program, Mueller said, "We feel more confident about giving people access to screening, giving people the right assessment, making the right referrals. The piece we don't have control over is what's available on the other end of that call."

She hopes state officials will focus the rest of the federal grant money on building up the spokes. "That really is the heavy lifting," she said.

But at the same time, she said, "We've also had people wait to get a bed that they needed when they needed it."

And that delay can mean a lost moment for someone to find recovery, she said.

"We know sometimes that motivation and that opportunity is fleeting," she said.

Patricia Reed is state director of Granite Pathways, which runs the hubs in Manchester and Nashua. Both cities had "well-established and strong community collaboration" even before the hub-and-spoke system was created, she said in an emailed response to questions about the program. "These communities have consistently demonstrated what is possible when people come together to solve problems."

Reed said her agency works closely with the Safe Station programs in those cities.

"The fire station remains a critical access point for those seeking help," she said.

Both Granite Pathways hubs accept walk-ins, offering them screening, evaluation and help with accessing treatment and ongoing recovery support. And while lack of health insurance can be a barrier to accessing medication-assisted treatment, Reed said, The Doorway staff works with clients to help them obtain insurance.

In the North Country

The new system is also making a difference in a part of the state that has lacked treatment resources: the North Country.

Dr. Lars Nielson, chief medical officer at Weeks Medical Center in Lancaster, is also the medical director for the two North Country hubs. One is on the campus of Androscoggin Valley Hospital in Berlin and the other is run by Littleton Hospital at a site downtown. Weeks Medical Center contracts with the two hospitals to provide professional services at the two hubs, he explained.

Weeks has had a program for substance-use disorders for nearly three years, so it had the trained clinicians in place when The Doorway program was established, Nielson said. "We were open for business on January 2nd in both hubs," he said.

The Littleton hub has served 68 clients to date and the Berlin hub 45, according to DHHS. In addition to The Doorway program, Nielson said, 60 people have been getting treatment through clinics in Lancaster and Whitefield.

The new program is having an impact, Nielson said.

"There are a lot of people who have been struggling, who had been trying to or wanting to get into treatment but just did not have access," he said. "So this new access is something that's very, very welcome."

He estimates about a third of those he's seen in the Littleton hub had been getting treatment elsewhere. Now, he said, "There's access closer to home, so people have been voluntarily coming back."

People who need residential treatment are still likely to head "downstate" for help, he said, because only the Friendship House in Bethlehem offers such services locally. The Doorway's "spokes" operate on an outpatient basis, providing therapy, medication-assisted treatment, recovery coaches and support for other needs such as transportation, housing, employment and legal issues.

When someone calls the statewide 2-1-1 helpline, he or she is directed to the nearest hub for screening and services. But, according to Reed, the hubs in the state's largest cities are still seeing clients come from all over New Hampshire because there are more spoke services in the southern tier.

Reed thinks the state's public awareness campaign will help. "As people begin to learn more about Doorways closer to home, the numbers in Manchester and Nashua from other regions will decrease," she predicted.

As part of building up the spokes in the communities, Mueller said, the state needs to look at workforce issues, creating incentives and removing barriers to get more people licensed to provide treatment services. "We hope that as a hub, we can help advocate at the state level," she said.

Three months in, what grade would Nielson give The Doorway up north?

"Right now I would say we’re at least a B-plus," he said. "That's not the final grade. But we're making big impacts on a lot of people's lives."

The eyes of the nation are on New Hampshire and how it’s using millions of dollars from the federal government to fight the deadly opioid epidemic.

Hub-and-spoke: If alcohol is your drug of choice, you're welcome too

MANCHESTER -- After 20-plus years of “hardcore” drinking, Bill Sutton was ready to quit. But as he looked around New Hampshire, all the attention seemed to be on people addicted to opioids and other drugs.