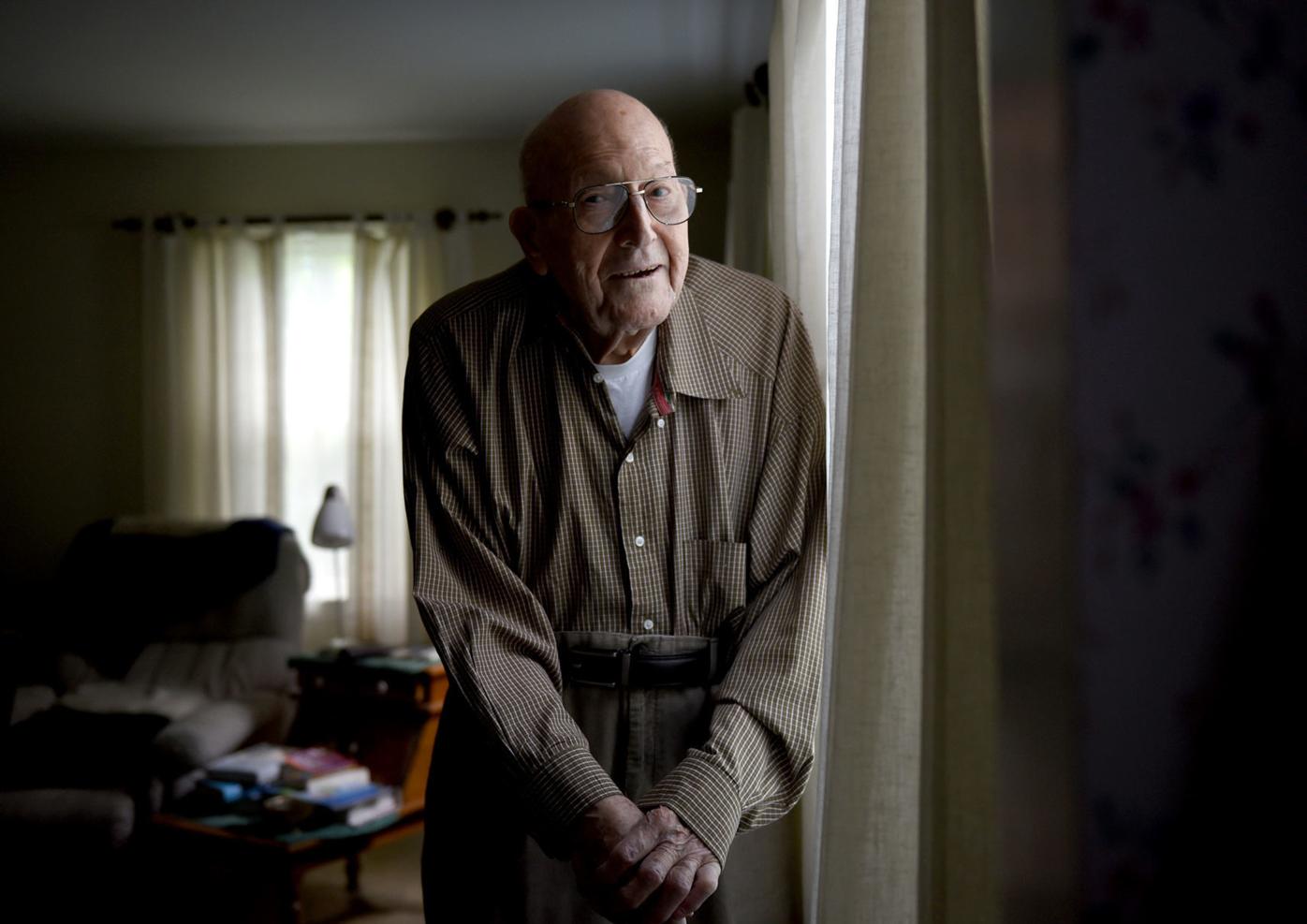 Herman “Herk” Streitburger donated the Bible that is at the center of the controversy. 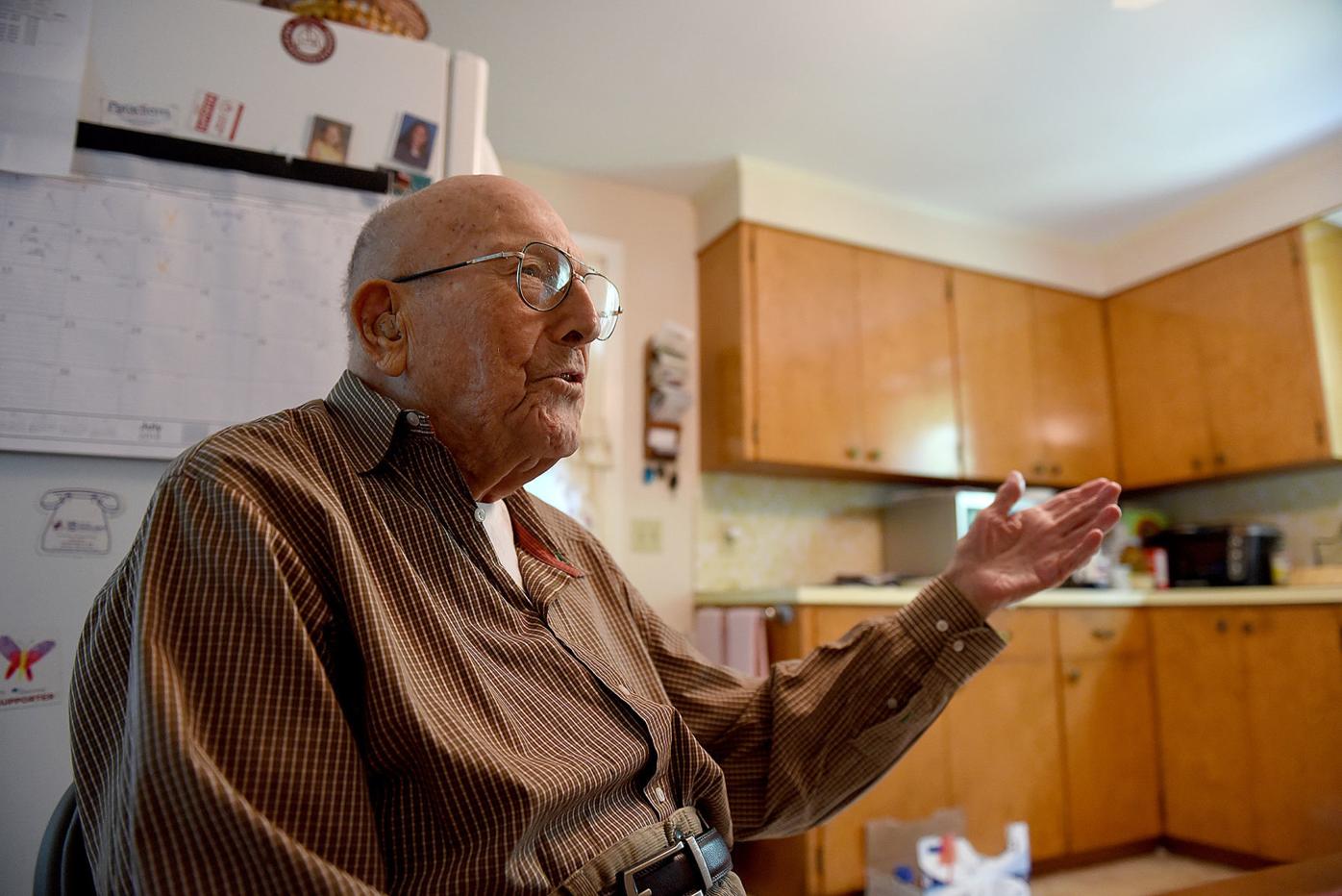 Herman “Herk” Streitburger, a 100-year-old World War II veteran from Bedford, shares the story of his capture and escape as a POW. 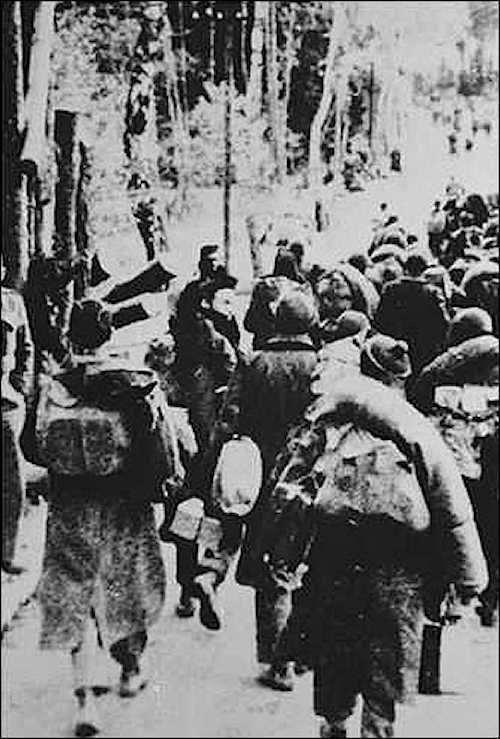 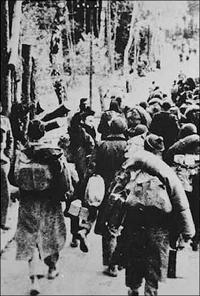 This historical photo depicts the forced march of American airmen from Stalag Luft IV in February 1945. One of those POWs was Herman “Herk” Streitburger. 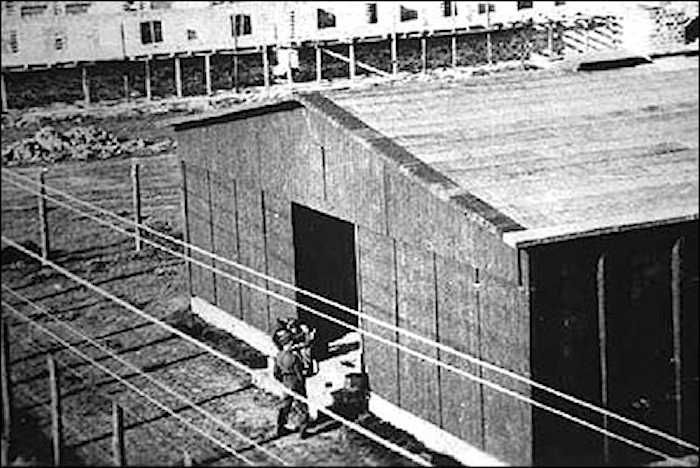 Stalag Luft IV, where Herman “HerK” Streitburger of Bedford was held as a prisoner of war during World War II. 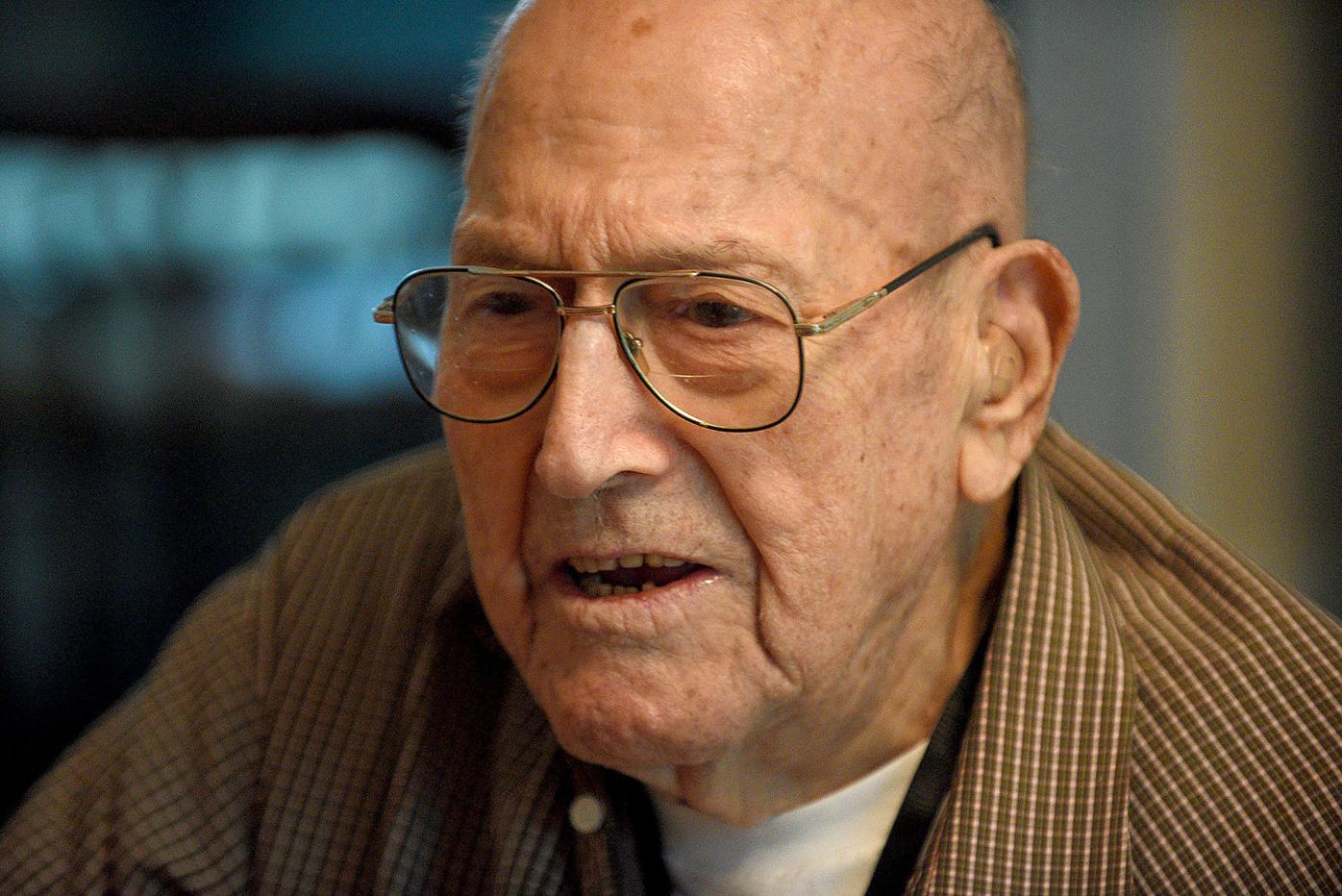 Herman “Herk” Streitburger was on his final bombing mission and due to go home when his plane was hit by German fighters over Hungary in 1944. He was captured and held as a prisoner of war, enduring starvation, forced marches and a harrowing escape.

Streitburger just turned 100 years old. That makes him a national treasure as well as a Granite State hero.

Streitburger, who lives in Bedford, gets around using a cane and remains active in POW groups and events. It was he who donated his family Bible to a POW “missing man” display at the VA Medical Center in Manchester, which prompted a federal First Amendment lawsuit.

And every year, he tells his World War II story to Manchester schoolchildren. It’s a story worth retelling.

Streitburger was born on June 24, 1919, in Philadelphia. He was 20 years old when his draft number was called. He joined the Army and spent time in Texas training on what he remembers as “antiquated” anti-aircraft guns.

That’s when he joined the Army Air Corps aviation program. He learned to fly on a light plane, but says he “washed out” when it came to flying the more advanced planes. So he went to aviation machine gunnery school and became a gunner on a 10-man crew training on the B-24 Liberator bomber.

After more training in South Carolina and Cuba, his crew flew a brand-new airplane from Long Island, N.Y., to Africa, where they briefly took on a little mascot, a monkey they named Wilbur. They went on to join the 98th Bomber Group in southern Italy and began their bombing runs.

Back then, if you flew 50 missions, you could go home, he explained. Streitburger had flown 48, and the next mission was worth double credits. “That would have given me my 50 missions, and I would have gone home,” he said. “Instead, we were shot down.”

With two engines knocked out by anti-aircraft fire, the pilot managed to bring the plane around and made it as far as Hungary. Then the German fighters appeared “and they finished us off,” Streitburger said. “They hit the gasoline lines in the bomb bay.”

Streitburger had prepared himself, mentally and physically, for such a day after witnessing another American bomber take a direct hit from a German anti-aircraft gun. “In an instant, the plane exploded and 11 lives were snuffed out,” he said. “It frightened the living daylights out of me.”

So from then on, he kept a pair of shoes laced together and nearby; he knew flight boots were difficult to walk in. He observed how the spent cartridges and ammunition boxes that were thrown out always fell away without hitting the plane. And when his own plane was hit, he said, “Everything came back to me exactly as I had rehearsed it.”

He threw off his flak suit, grabbed his shoes, hooked his parachute on and went out the window. “And sure enough, I cleared the horizontal stabilizer.”

One of the crew members went down with the plane; another’s parachute harness came off and he fell to his death. The rest landed in a field in Hungary — and found themselves surrounded by pitchfork-wielding “peasants” who had been tilling their fields when they spotted the parachutes. The Americans were taken by train first to a military barracks, then to Budapest, where they were loaded onto an open truck. “And all of a sudden, it seemed like hundreds of people came running out of everywhere, barefooted and their clothing in tatters,” he said. “All they wanted to do was get a hold of us.”

He understands their anger, he said. “They knew we were American flyers. We were American bombers. We had bombed their homes, and some of their people might have been killed.”

Keeping the locals at bay, the guards took the prisoners to a dilapidated prison, where the bare mattresses were infested with bedbugs. They were fed brown bread, watery soup and what passed for coffee — “hot water with a shot of grease,” Streitburger described it.

After 18 days, the prisoners were taken out of their cells, allowed to shower and interrogated. Then they were loaded into a railroad box car — again surrounded by angry local residents, this time armed with rocks, and shipped north.

On arrival, they were marched a couple of miles through the woods to a prison camp known as Stalag Luft IV, where the POWs settled into a routine. They got precious food packages from the American Red Cross, with coffee, chocolate, cheese, powdered milk, raisins, soap and cigarettes. All were valuable currency for bribing the guards, and Streitburger’s ability to speak German helped him negotiate trades.

The prisoners even managed to make a radio so they could listen to news from the BBC, hiding it in a hollowed-out table leg. And that’s how they knew the Allied forces were gaining the upper hand. The Germans suspected the American prisoners were getting news from somewhere, and although they searched for the radio, “they never found it,” he said.

After about eight months in the camp, they began hearing artillery fire. “We knew it was the Russians,” he said.

Their German captors marched them north. Streitburger had fashioned a knapsack from a spare shirt, and he stuffed extra Red Cross food packages into it before they left, which may have saved his life. It was February of 1945 and “one of the worst winters they ever had,” he said. The POWs slept on the ground, with two blankets each to try to keep from freezing in the ice and snow.

“For 83 days, we marched,” he recalled. Many soldiers were stricken with dysentery. “It was pitiful,” he said softly.

What kept him going? “German stubbornness,” he said. His father had died when he was quite young, and his mother was strict. “From a child, I had discipline,” he said. “I always attributed a lot of that to my survival.”

The POWs finally reached another prison camp, where “food was almost nonexistent,” he said. But the British and American forces were getting closer, so the Germans prepared to march the starving POWs back south again. That’s when Streitburger and two others hatched a plan to escape.

One man pretended he was ill, and the other two offered to wait with him for the next “kranken-wagen,” the wagons used to carry sick prisoners. When the line moved on, “the three of us picked our gear up and ran into the woods.”

They made a camp of sorts using blankets as tents. After a few days, they heard machine gun and rocket fire nearby, then the sound of German voices. “They were escaping from where the fighting had been going on,” he said.

The three Americans tied a dirty white towel to a stick and walked out — and ran into a German officer, who pulled out a pistol. “If it had been the SS, one of Hitler’s killers, they would have shot us right away,” he said.

But Streitburger recognized from the man’s uniform that he was from the regular German army. Speaking German, Streitburger asked him, “When was the last time you had a good cup of coffee and a good cigarette?”

The German followed them back to their little camp, where the Americans gave him some of the Red Cross coffee and an American cigarette. “Well, he loved that,” Streitburger said. After another cup of coffee and one last cigarette, the officer pointed them in the direction to meet the approaching Allied troops. “I’m going home,” he told the Americans.

The three Americans headed out and soon ran into British soldiers, announcing themselves as escaped prisoners of war. They were treated to their first hot breakfast in many months, taken to Brussels and then flown by cargo plane to France as RAMPs (Recovered Allied Military Personnel).

Streitburger sailed home on a troop ship filled with other ex-POWs. And while they were at sea, “The captain made the announcement that Germany had finally accepted unconditional surrender,” Streitburger said. “Oh, it was such a happy moment.”

And, he said, “When we finally came into New York harbor, of course, what do we see? The beautiful Statue of Liberty is the first thing.” Passing ships sounded their horns in welcome, “knowing who we were.”

Streitburger took a train to Long Island, where his mother was living. “Of course she was ecstatic,” he said. He was sent off for R&R to a luxury hotel in Atlantic City, where “they treated us royally.”

Not long after that, an Army buddy set him up on a blind date. He ending up marrying that girl, Jacqueline Matthews; they raised four children, twin girls and two boys. Streitburger went to work in sales and marketing for the company that made Rheingold and Knickerbocker beer.

He moved his family to New Hampshire in 1967 and bought the house in Bedford where he still lives with his son, Guy; his wife died in 2002. He has seven grandchildren and three great-grandchildren.

A Bible once owned by a prisoner of war -- and on display at the Veterans Affairs Medical Center -- has launched a battle over religious freedom.

The Veterans Administration said it will remove items representing different religious faiths placed Thursday next to a Bible on a POW/MIA table at the Veterans Affairs Medical Center.

Streitburger still attends a POW group that meets monthly at the Manchester VA Medical Center. “There’s only a few of us left,” he said. And when the Northeast POW-MIA Network asked to put up a missing man table in the lobby of the medical center, Streitburger contributed his family Bible for the display.

But some veterans complained that displaying the Bible violates the First Amendment, and they filed a federal lawsuit, supported by a group called the Military Religious Freedom Foundation. The VA first removed the Bible, then returned it to the display when other veterans complained.

The controversy has pained Streitburger. The missing man display honors “those who are still missing and those who have died, especially if they died in captivity,” he said. And he said his Bible wasn’t meant to represent any particular religion. “It could be a Catholic or a Protestant Bible, a Jewish Talmud or a Koran for the Muslims,” he said. “To me, all it represents is a deity. That was my thought.”

In his century on this Earth, Streitburger has seen the best and worst of humanity, not to mention a staggering number of technological advances, from spaceflight to computers.

But he’s clear about what really matters in life: “Just knowing that my family is around me,” he said. “Ah, it’s everything.”