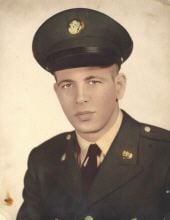 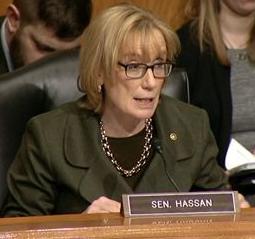 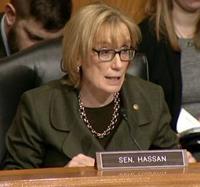 Sen. Maggie Hassan, D-NH, demands from federal officials how quickly they can use $50 million in additional grants to wipe out a massive backlog of families seeking military records on their loved ones.

Charlene Fyfe got stuck in a bureaucratic maze for more than a year, trying just to get a federal employee on the telephone as she searched for the military records of her father, Norman Levesque, 77.

The Milford woman credits Sen. Maggie Hassan, D-NH, and staff with pulling the strings necessary to get those documents to Fyfe a few weeks ago.

They didn’t come until after Levesque died Dec. 12 at a local nursing home, four days after he had gotten COVID-19.

But hers is one of thousands of stories that cry out for reform of the National Personnel Records Center in St. Louis, Mo. where 60 million paper records of veterans are stored.

By the end of 2020, the backlog had grown to an estimated 445,000 requests for these records, according to Hassan.

Levesque would have been eligible to be buried in the New Hampshire Veterans Center in Boscawen. Without the forms, Charlene’s family paid out of pocket to bury Levesque in town.

“What about somebody who did not have the funds to bury their loved one? That’s the sad thing,” Fyfe said during a telephone interview.

“They’ve got to do something about this system. Even with COVID, there’s no excuse for being told over and over again, ‘Well, there is no one answering the telephone.’’’

“I urge you to quickly use this emergency funding provided by Congress to safely resume the processing of all military personnel records requests by veterans,” wrote Hassan, a member of the Senate Homeland Security and Government Affairs Committee.

Hassan called on the director to explain by Feb. 22 why the program can’t set up a remote call center, and when it will move to use the additional dollars to digitize all the older records.

“I have heard from numerous Granite State veterans about how these operational changes have led to delays in receiving the benefits they deserve and have earned,” Hassan said in a statement. “These delays in benefits can cause potentially irreparable harm to veterans’ health and financial well-being.”

Fyfe said she became focused on these records when her father went out one night in September 2019 and didn’t come back.

“I ended up finding out four days later he had been out, wound up in a local hospital and then was sent by med-flight to a Boston hospital,” Fyfe recalled.

“He was in the intensive care unit with a broken neck, cracked skull, paralyzed vocal chords and had a stroke after falling down a flight of stairs.”

That’s when family members urged her to get records of his three-year service in the U.S. Army, which included a stint in Germany during the Vietnam War.

The records may have qualified Levesque for enhanced government benefits, even after he was sent to live in a nursing home.

A longtime salesman who grew up in Hudson, Levesque’s proudest work was for the Federal Emergency Management Agency, his daughter said.

“I tried the VA in Manchester, in Jamaica Plain (Mass.), faxed the request for that form a dozen times. Nothing worked until my family said you need to reach out to the senators,” Fyfe added.

“They accomplished what I was trying to accomplish for a year in much sooner time. I am very grateful to them.”

The records in hand meant government benefits will probably pay for the headstone bearing her father’s name. It will be placed at his burial plot this spring.

“I think he would have liked that I kept pursuing this and at least got that done,” Fyfe said.