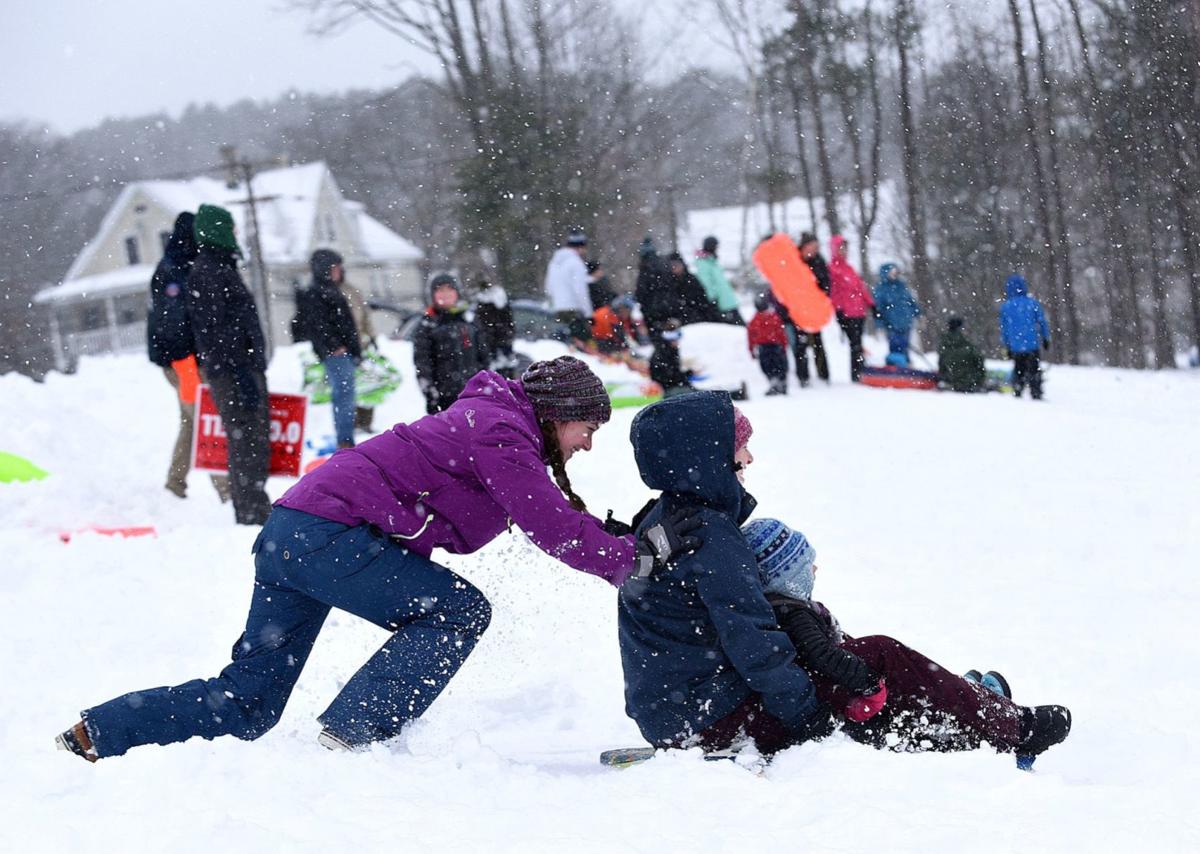 Kate Broderick of Manchester gives a push to her sister, Macy Broderick and her niece, Annabell Cole Grove, right, while sledding at Derryfield Country Club during Monday’s nor’easter in Manchester.

Manchester Superintendent of Schools John Goldhardt errs on the side of caution when it comes to calling snow days.

Kate Broderick of Manchester gives a push to her sister, Macy Broderick and her niece, Annabell Cole Grove, right, while sledding at Derryfield Country Club during Monday’s nor’easter in Manchester.

Manchester Superintendent of Schools John Goldhardt errs on the side of caution when it comes to calling snow days.

MANCHESTER — On Sunday, newly installed Manchester school Superintendent John Goldhardt made a defining decision of his administration — one that will be debated, analyzed and dissected in the months to come:

He canceled school because of a snowstorm.

It likely won’t be the last time that Goldhardt, a native of Utah who last worked for the Salt Lake City school district, calls off school because of snow.

Goldhardt takes over from Dr. Bolgen Vargas, who over his 2½ years as superintendent was loath to close school because of snow.

Things may be changing. Goldhardt said Monday the decision is a balancing act that considers factors as diverse as road conditions, the distance some employees must travel to Manchester, children’s outerwear and lost instructional time.

“My preference is that they’re always in school, but I don’t want to jeopardize safety. It’s a fine line, and quite frankly you’re damned if you do and damned if you don’t,” Goldhardt said.

“That is one of the jobs of the superintendent. He has complete control over it,” said Sue Hannan, president of the Manchester Education Association, the union that represents Manchester teachers.

Goldhardt said he started getting calls from area school superintendents on Saturday. They stayed in touch by telephone and text messages on Sunday. Goldhardt paid close attention to Goffstown school Superintendent Brian Balke, a “weather savant” who goes as far as analyzing radar reports, he said.

By Sunday afternoon, area school districts had started canceling school for Monday. Goldhardt said he was one of the holdouts, waiting until about 4 p.m. to decide. Goldhardt said he also consulted with the city police and highway departments. He said he did not speak to Mayor Joyce Craig or other elected officials before making the decision.

“Where I come from, we wouldn’t have closed today,” Goldhardt said on Monday. “Storms like today we get frequently.”

At 4 a.m. Monday, 8 inches of snow had accumulated in Manchester, according to the National Weather Service.

In the future, Goldhardt said, he may use two-hour delays to see if conditions improve, and then cancel school that day if they do not.

Salt Lake City has an average annual snowfall of 56 inches a year, and 35 days a year has a fresh coat of snow on the ground, according to National Climatic Data Center data reported by currentresults.com.

The snowfall totals can be deceiving. The Data Center measures snow in liquid equivalent, so western snow, which is drier, measures deeper than wetter eastern snow.

Goldhardt said Salt Lake City schools closed one day last year, after a 24-inch snowfall; it was the first cancellation in 20 years, he said.

Vargas, who had lived in Rochester, N.Y., was fond of saying that it snows in New England, according to long-serving school board vice chairman Arthur Beaudry. He said Vargas frequently delayed making a decision, preferring to see snow falling before he made the call.

With 53 percent of Manchester students eligible for free and reduced-price lunches, Vargas thought it would be best if the kids were in school, Beaudry said. They would get a hot meal, they’d be in a warm building, and they’d be learning in a classroom. By comparison, they might be left home alone if a parent couldn’t get the day off work.

“These are the things he’d always say about the kids,” Beaudry said. “He was his own guy. Snow didn’t affect him.”

Hannan applauds Vargas for his approach, but said it can go too far. Some streets around her school, Hillside Middle School, don’t have sidewalks, and those with sidewalks aren’t plowed quickly, she said.

“If you can’t get there safely, they’re not going to be eating because they’re going to be lying on the side of the road,” she said.

Another factor is the school calendar. It allows for five snow days before students and teachers have to start making up the lost days. That potentially reduces the school year to 170 days, Beaudry said.

Yet a school-at-all-costs approach has drawbacks. Beaudry said the city could do a better job of plowing sidewalks; elementary school students sometimes have to walk in streets.

Goldhardt said he is concerned about the lost instructional days. He also said some Manchester children do not have the proper boots, gloves and coats to wear to school in bad weather.

He said a decision about school Tuesday would lean heavily on how well the streets and sidewalks are cleared.