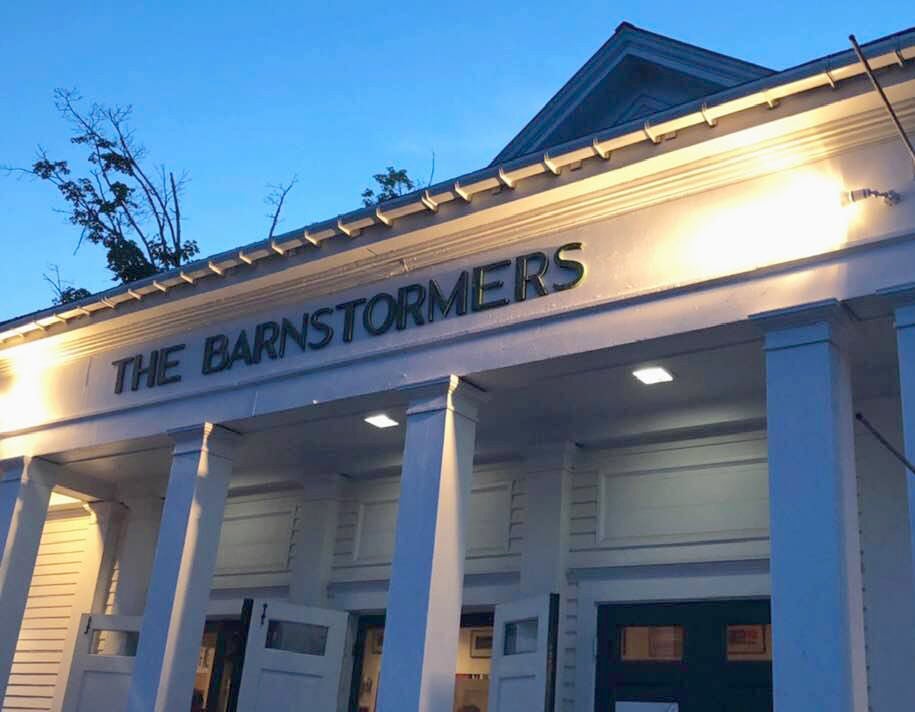 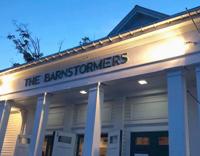 The Barnstormers Theatre has been lighting up the center of Tamworth since the mid-1930s. 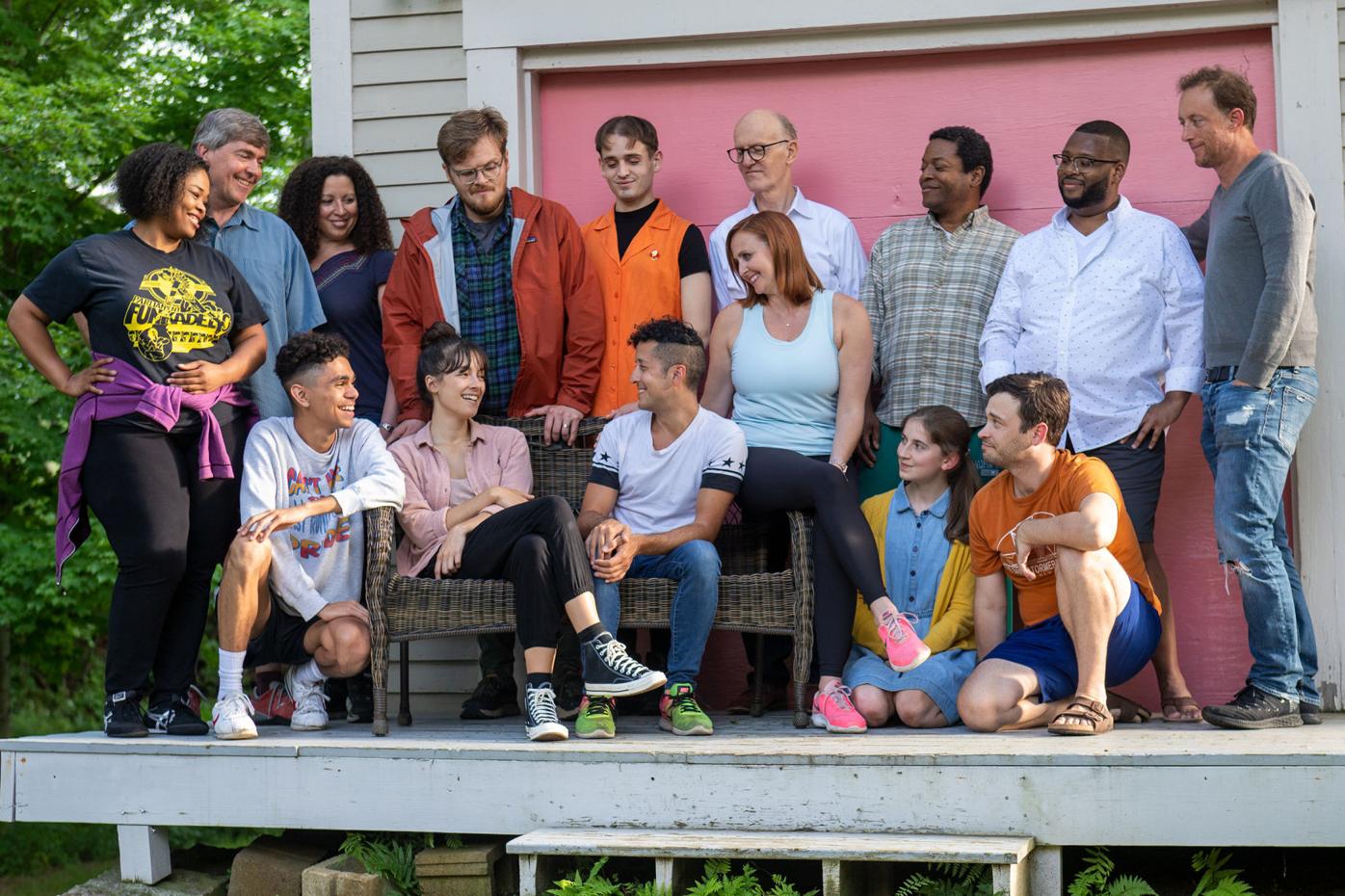 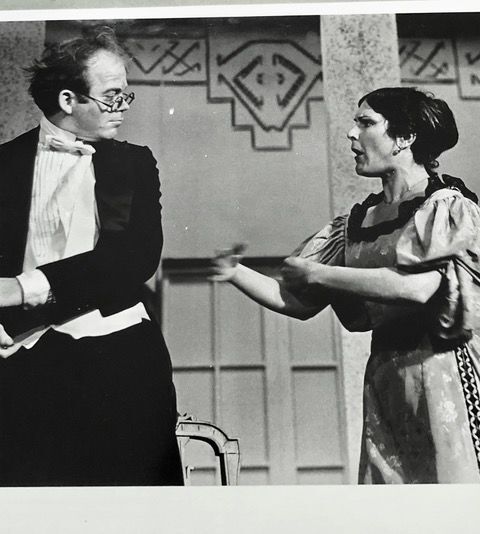 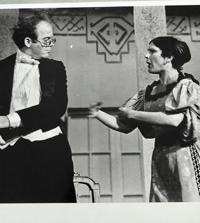 In this throwback picture to earlier days at the Barnstormers Theatre in Tamworth, D. Neal Brown, as Yepikhodov and Jean Mar Brown, as Varya, perform in a production of Anton Chekhov's play “The Cherry Orchard.” 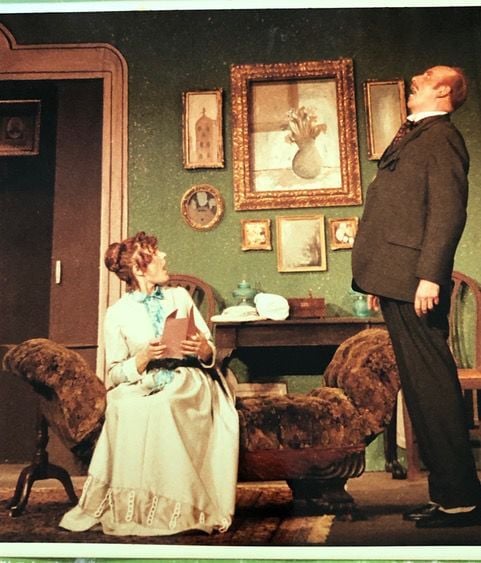 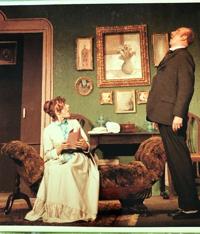 Jean Brown, a Tamworth actress who has been performing in Barnstormers Theatre productions for more than 40 years, appeared in “Life with Mother” with actor Jim Elward. 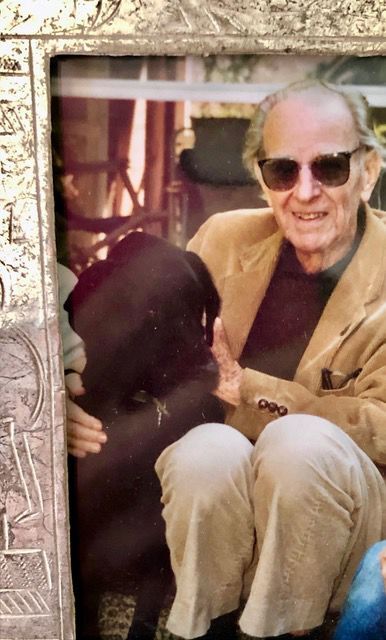 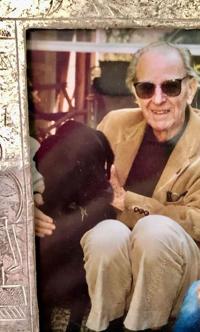 In this archive photograph, the Barnstormers Theatre's late founder, Francis Cleveland, poses for a picture with Zak, a dog owned by friends and stage performers Jean and D. Neil Brown. 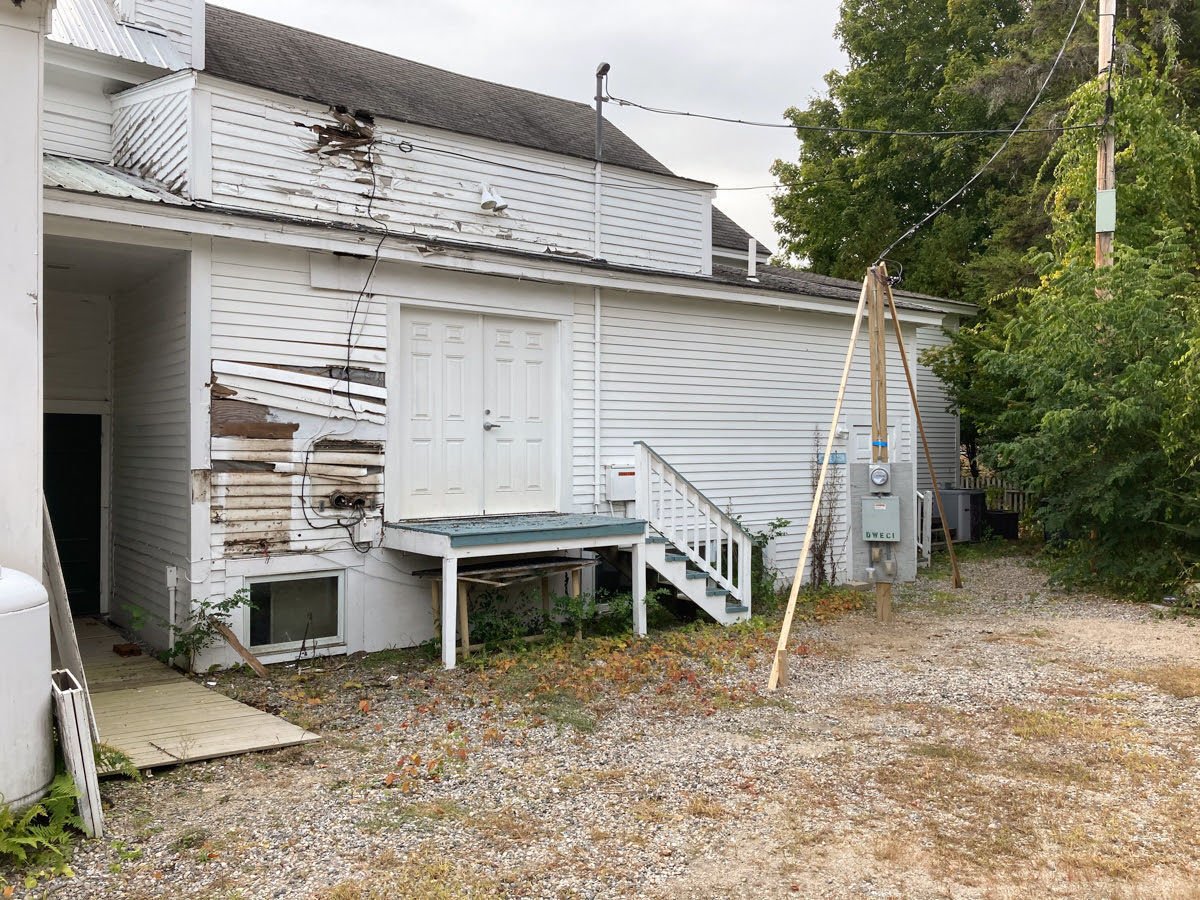 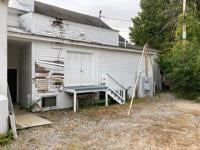 In its second phase of restoration and renovation, the Barnstormers Theatre in Tamworth tackled replacement of the leaky roof and electrical upgrades. 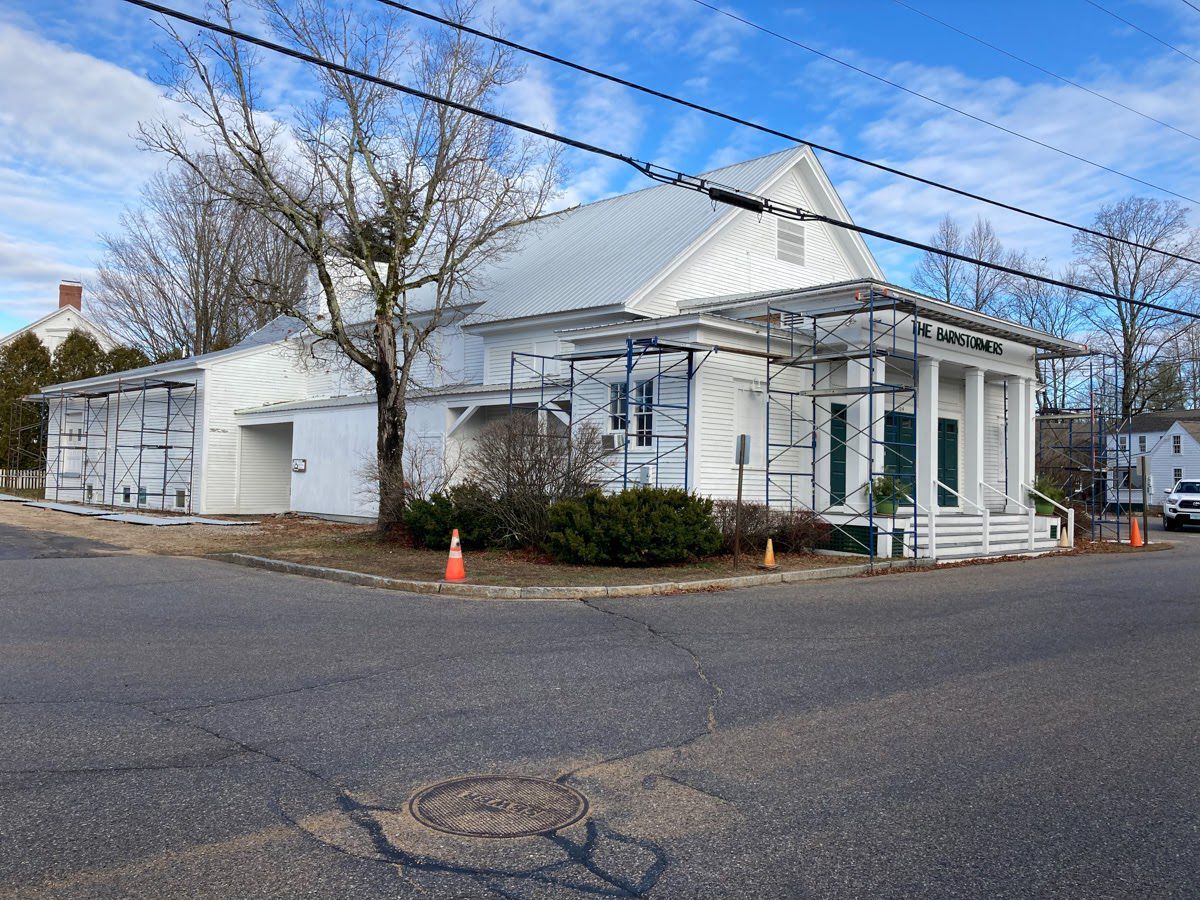 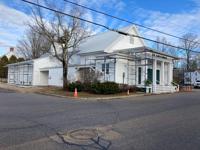 The Barnstormers Theaters is back and open for the summer season. 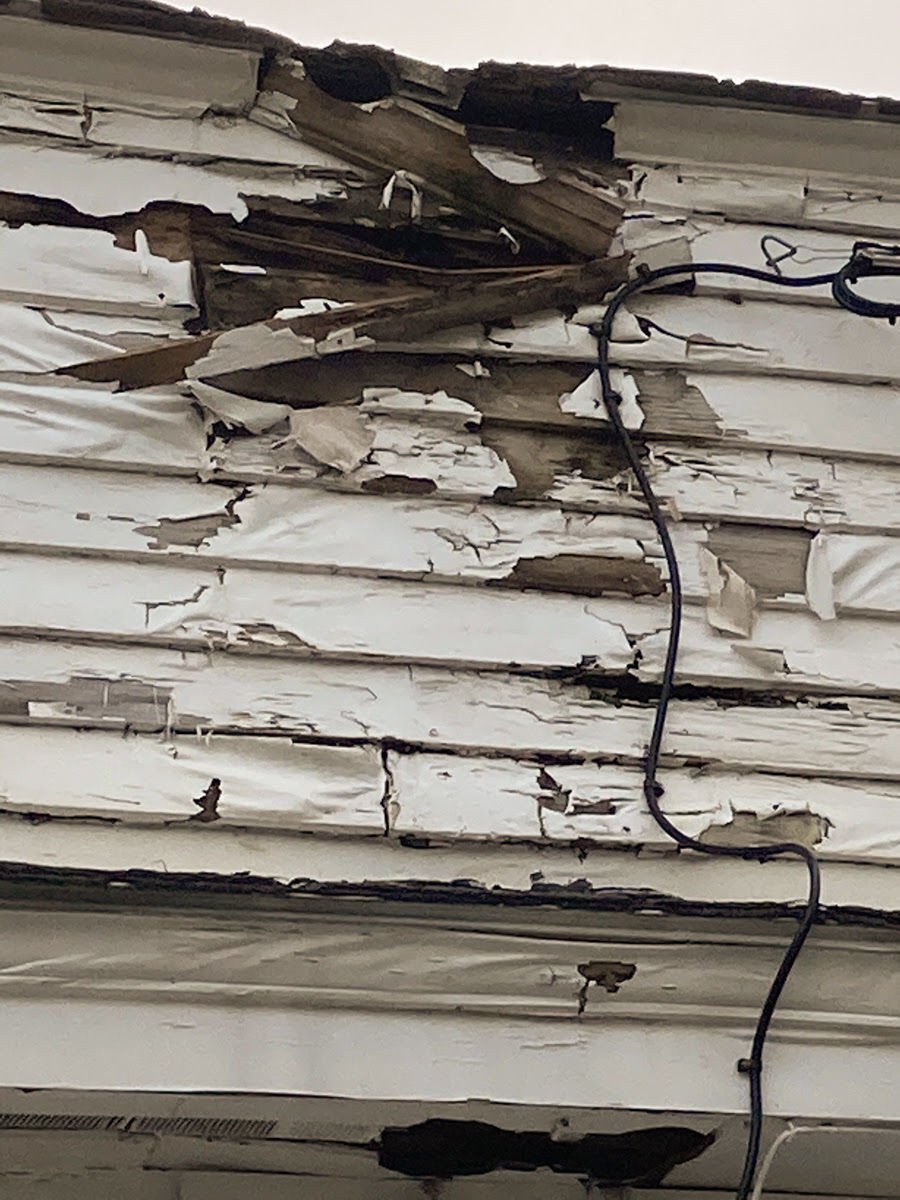 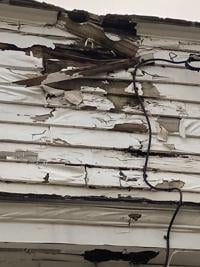 The Barnstormers Theatre has been lighting up the center of Tamworth since the mid-1930s.

In this throwback picture to earlier days at the Barnstormers Theatre in Tamworth, D. Neal Brown, as Yepikhodov and Jean Mar Brown, as Varya, perform in a production of Anton Chekhov's play “The Cherry Orchard.”

Jean Brown, a Tamworth actress who has been performing in Barnstormers Theatre productions for more than 40 years, appeared in “Life with Mother” with actor Jim Elward.

In this archive photograph, the Barnstormers Theatre's late founder, Francis Cleveland, poses for a picture with Zak, a dog owned by friends and stage performers Jean and D. Neil Brown.

In its second phase of restoration and renovation, the Barnstormers Theatre in Tamworth tackled replacement of the leaky roof and electrical upgrades.

The Barnstormers Theaters is back and open for the summer season.

F rom its start 90 years ago as a traveling troupe of entertainers, The Barnstormers Theatre has been making memories on and off stage in the center of Tamworth.

“The experience isn’t just going there to a show. It’s the farmer’s market’s crumb bun, the distillery or Rosie’s (Restaurant). It’s the whole experience of the place,” said New York actor Doug Shapiro, a familiar face in Barnstormer productions.

Last year should have been his 20th season but the COVID-19 pandemic halted indoor shows. Still, he did sneak up for a walk around Tamworth village and visit to favorite spots on his 50th birthday.

Shapiro joked that his resume needs to be headed with this key note: “Doug enjoys breakfast at Rosie’s, and also, he’s an actor.”

Shapiro, with actress Amanda Huxtable, next will juggle about 40 characters in “Popcorn Falls” at The Barnstormers Aug. 31-Sept. 4.

The Barnstormers is a community within a community, a close-knit performance company ingrained in the framework of the town.

Francis Cleveland, a son of two-time U.S. President Grover Cleveland, was an aspiring Broadway actor when he and his wife, Alice, founded the New Hampshire-bred summer stock program in 1931 along with Ed Goodnow, who would serve as its first director.

For four years, the group “stormed” barns, town centers and other makeshift stages throughout the Granite State and Maine before buying Kimball’s store on Tamworth’s Main Street and converting it into its own home base.

Tucked between postcard-worthy vistas of the White Mountains and the Lakes Region, the theater drew locals, some who lived here year-round and others who spent their summers there, as well as tourists who often counted a Barnstormers’ show as a vacation tradition. Either way, it’s common to hear patrons talk about bringing their own grandchildren to shows.

Louis DeMaio, chairman of the Barnstormers’ board of directors, is one of those grandparents. DeMaio hopes Barnstormers’ reopening will energize not only the theater community – they hire anywhere from 30 to 50 cast, crew and support staff for each professional show — but the Tamworth area as a whole, since eateries, shops and lodging rentals also benefit from “pent-up demand” from longtime patrons as well as the tourist industry.

Thanks to huge community support, a major renovation project and the end of pandemic restrictions, the Barnstormers are back with a summer season that launches July 27-31 with a new take on a perennial favorite, Thornton Wilder’s “Our Town.”

Throughout Barnstormers’ history, “Our Town” has been a cultural touchpoint. Cleveland appeared in the original 1938 Broadway production of Wilder’s Pulitzer Prize-winning tale about life, marriage and death in the fictional New Hampshire town of Grover’s Corners.

Cleveland later revived the story on the Barnstormers’ stage, and it’s been a staple ever since.

Ask cast, crew, staff and retirees about “Our Town” and most everyone at one time or another has worked on a production of what is the most-presented play in American history.

Brown first discovered the Barnstormers Theatre as a child at her family’s summer house in Chocorua.

“I just loved it, especially the melodramas. We’d go around imitating the actors after each show, all summer long,” she said.

Brown later majored in theater and in her early 20s sent a letter to Cleveland, asking for a job at the beloved theater.

But the answer was a resounding no.

“He said they always used the same actors (from show to show) unless someone died or got married,” she said, laughing.

Later, when Brown became part of the Actors Equity Association, she again reached out to Cleveland. She scored her first role in 1978, and she’s been performing at the professional theater ever since. “We got to be great friends. He was a charming man,” she said of Cleveland, who died at 92 in 1995 in Wolfeboro.

Brown also met her husband, David, (who was known in theater circles as D. Neal Brown) at the theater in a production of Anton Chekhov’s play “The Cherry Orchard.”

But in a treasured snapshot of the pair in that early production, she doesn’t look very happy.

“My character is getting really mad at him and telling him to go away,” she said.

Brown, in real life, is bright and engaging, her laughter bubbling over as she shares her Barnstormers tales, including two about an actor who took himself a little too seriously.

He liked to start his own exit applause by clapping as he walked off the stage into the wings. But on one occasion he hit a snag.

“My husband was with him at the time and the guy went to start the applause again but when he raised his hand quickly, it got stuck in my husband’s costume, an Russian army uniform. He was furious,” Brown said. “Those are the things that set us off laughing.”

On another occasion, the same actor threw his cigarette into a barrel outside the theater just before he came on and the contents caught fire.

“He entered the stage and expected total attention, but there was smoke filtering into the open doors — it was a warm summer day — and all the audience got up and left just as he was about to start this huge speech. He was totally offended.”

Sometimes the mishaps are more serious. She also recalled a time the cast was in the middle of a scene in the Noel Coward play “Blithe Spirit” when they heard a big crash backstage.

“A few minutes later, we heard a siren and saw flashing lights. An actor had had a heart attack offstage. He had to be replaced by another actor with a script in hand. That was a little dramatic. Everyone kept saying their lines, but our minds were just whirling around. We found out later (what had happened.)”

Brown will next perform in a night of one-act plays by veteran Barnstormers cast members Sept. 3.

The Barnstormers has figuratively and literally raised the roof on its professional theater, thanks to community support and a several-phase renovation project using local contractors Addison Mason Builders and DW Electrical.

DeMaio said the first phase of work, in 2018, involved updates to electrical systems and mold remediation in the building.

In 2020, when the COVID-19 pandemic kept the theater closed, donors overwhelmingly responded to a fundraising call for $60,000 for the second phase of the three-tiered renovation project. An online plea put it succinctly: “The Barnstorners is in dire need of a new roof. We just can’t keeping hanging buckets from the ceiling anymore.”

In the third phase of what DeMaio calls a “10-year fix for us,” the exterior is getting a facelift, with worn-out clapboards replaced where needed and the entire structure painted, hopefully by mid-August. The lobby and box office also will get spruced up, hopefully in time for opening night of “Our Town.”

The Barnstormers were gearing up to begin this year’s season in an outdoor setting, but last week announced “Our Town” officially will be the first show inside the theater after a tumultuous, but busy, year and a half.

It comes with a new interim artistic director, Joe Longthorne, a Tony Award-winning producer and managing partner at Fourth Wall Theatricals. He’s also a Barnstormers’ regular, having appeared in 11 productions there, including “Our Town.”

To bring the 1930s play into 2021, Longthorne reached out to Clayton Phillips, who was artistic director of the Barnstormers from 2005-09, has worked on a handful of Broadway productions and national tours and been a longtime presence in summer theater in New Hampshire.

The revamped “Our Town” still will showcase the dialogue Wilder penned and a story centered around the daily lives of the Webb and Gibbs families as their children fall in love, get married and ultimately die. But it will have a more “inclusive” perspective, with a multi-racial cast and changes in how individual roles are conveyed, said Phillips.

In part, it’s a reaction to issues that have both polarized and galvanized people in recent years.

“I really like to find a universal message that speaks to the world at large. The #MeToo movement, Black Lives Matter, the trans movement — people are starting to stand up and say, ‘See me as who I am and see me for the person that I am.’ I don’t want to give too much away, but we are trying to do that so people have a greater sense of what theater is and where we are in the world – and how we need to keep our ears and eyes and hearts open to a more diverse world,” Clayton said.

Brown calls it a welcome “reinvigoration” of the Barnstormers, a “turning point” in honoring the past while welcoming new approaches to make the theater more accessible to a wider range of people.

But sparks of the past will always remain.

“There is a tradition in the theater that a standing light always be left burning in the center of the stage once a performance is over and the theater is dark,” said Anne Batchelder, the Barnstormers’ historian. “For a time in the late ’50s into the ’60s, the first person to come backstage — usually the stage manager — would often discover that the light … had been moved. We know the ghost wasn’t Francis, since was still with us at the time.”

But it’s possibility that he’s since moved into the role.

“We assume that our current resident ghost probably is Francis but there’s no way to know for certain.”

The Barnstormers' summer season will include:

"Waitress," Aug. 27-29 ("barnstorming" shows at Rosie's Restaurant in Tamworth and Castle in the Clouds)

Jazz and Swing Dance with The Tall Granite Band, Aug. 15 at The Preserve in Chocorua.