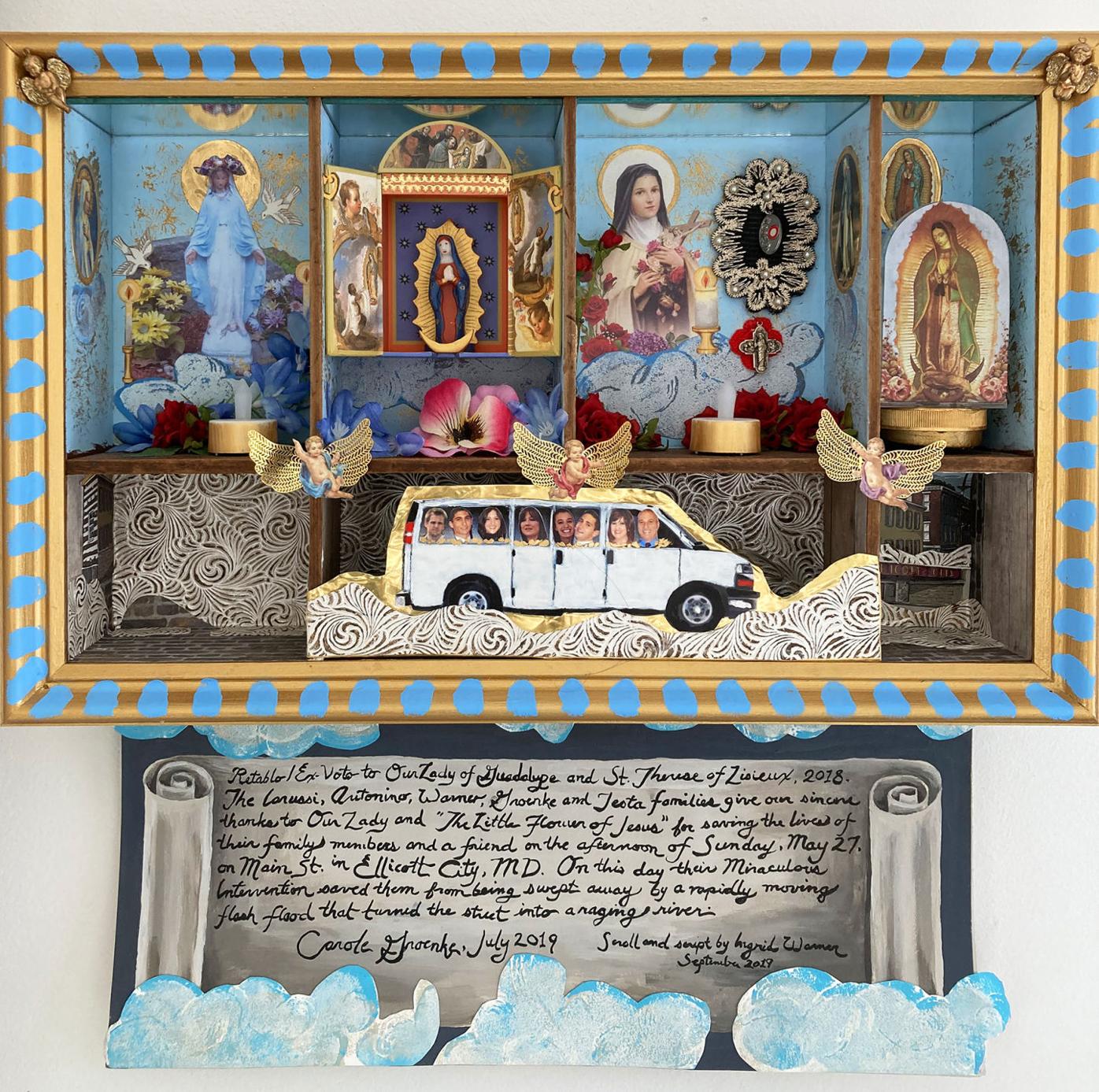 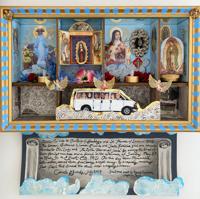 In “The Flood,” by Carole Groenke, religious iconography and cherubic angels hover over a passenger van. A scroll beneath them tells the 2018 backstory: five families are thankful for “miraculous intervention” that kept loved ones from being “swept away by a flash flood.” 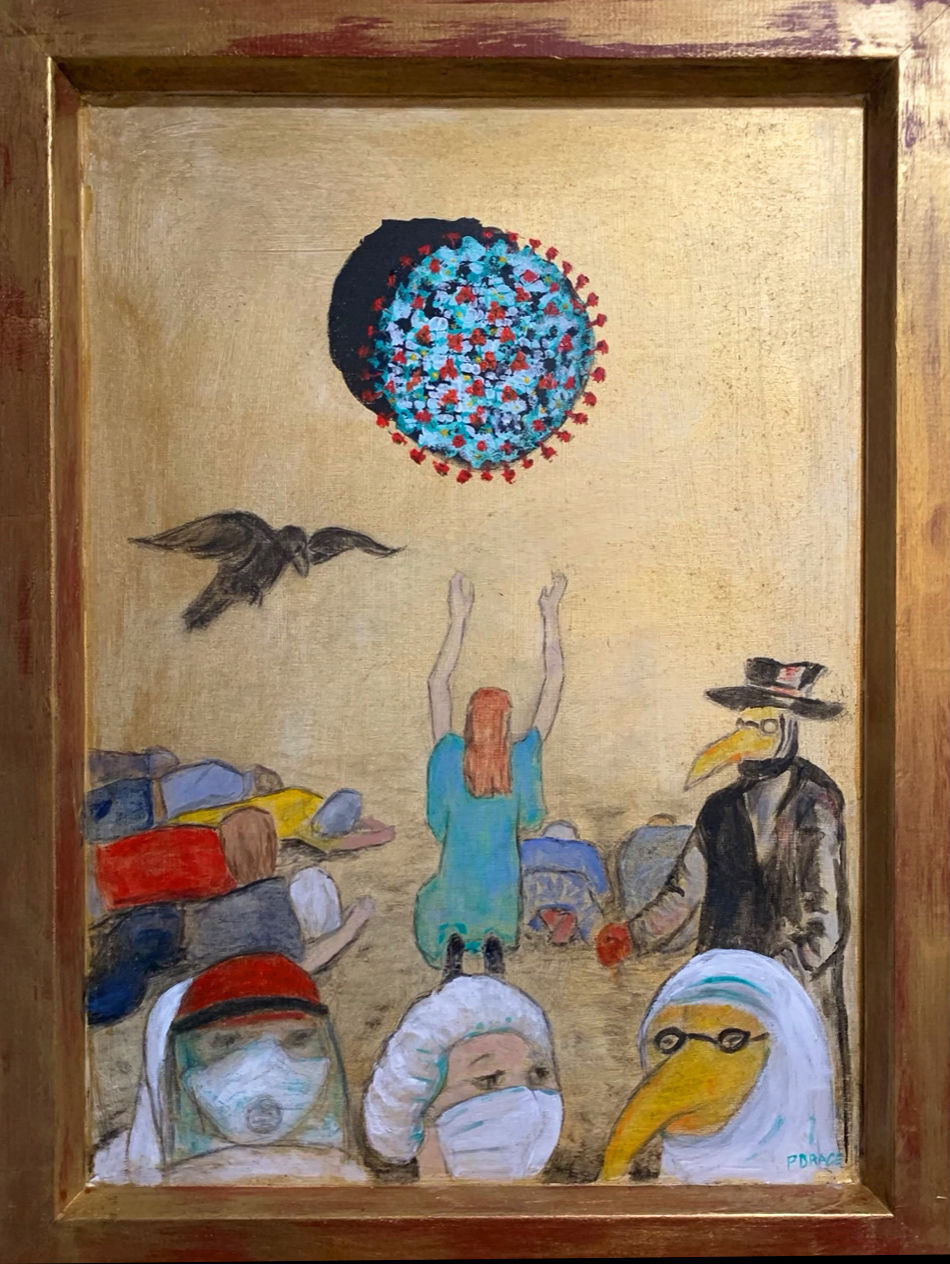 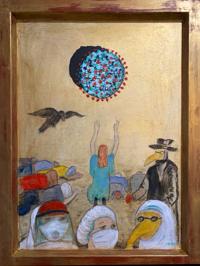 Paulette Brace, a featured artist in an exhibit opening Saturday at Twiggs Gallery in Boscawen, titled this COVID-themed piece “Fear Me.”

BOSCAWEN — From the specter of a red-spiked coronavirus sphere to the cutouts of faces in the windows of a van fleeing a waterlogged street, a dozen Granite State artists are giving devotional paintings a 21st-century perspective in “Retablos Reconsidered,” opening Saturday at Twiggs Gallery, 254 King St.

Retablos traditionally relate to some kind of miraculous event. For their contemporary takes on the art form, the artists drew on themes that have hit close to home personally, socially or politically.

In “Fear Me,” artist Paulette Brace of Plymouth depicts that instantly recognizable coronavirus model — a sphere with red spikes — rising like a specter above of a room filled with figures. Some are lying on the floor, one is kneeling with her arms hands raised in supplication, and four others are in face coverings or bird-like masks like those once worn during the bubonic plague.

“From ancient times people have searched for strong fierce, often blood thirsty, gods that they prayed could protect them from harm and enemies. Since that might could be turned on them, they designated powerful priests who could help them and keep them safe from their god,” Brace wrote in her artist’s statement. “This is the powerful, lethal COVID-19, with doctors, nurses and shaman — this one a ‘doctor’ from plague times — in their sacred garments and the sometimes unsuccessful pleading people.”

In “The Flood,” artist Carole Groenke depicted the “miraculous intervention” that kept loved ones from being swept away by a flash flood in 2018, in Ellicott City, Md.

Beneath religious iconography and cherubic angels, the cutout images of eight faces appear inside the windows of a passenger van as it flees a main street being overtaken by water.

Groenke, in an artist’s statement to hang in the gallery, says she is not a “devout Catholic,” but she chose the spiritual elements because “many of those who actually survived the event are deeply religious practicing Catholics, especially my sister in law Gia, who prays often to St. Theresa. This is why St. Theresa, ‘The Little Flower of Jesus,’ looms large in this piece.”

The exhibit runs through June 6.