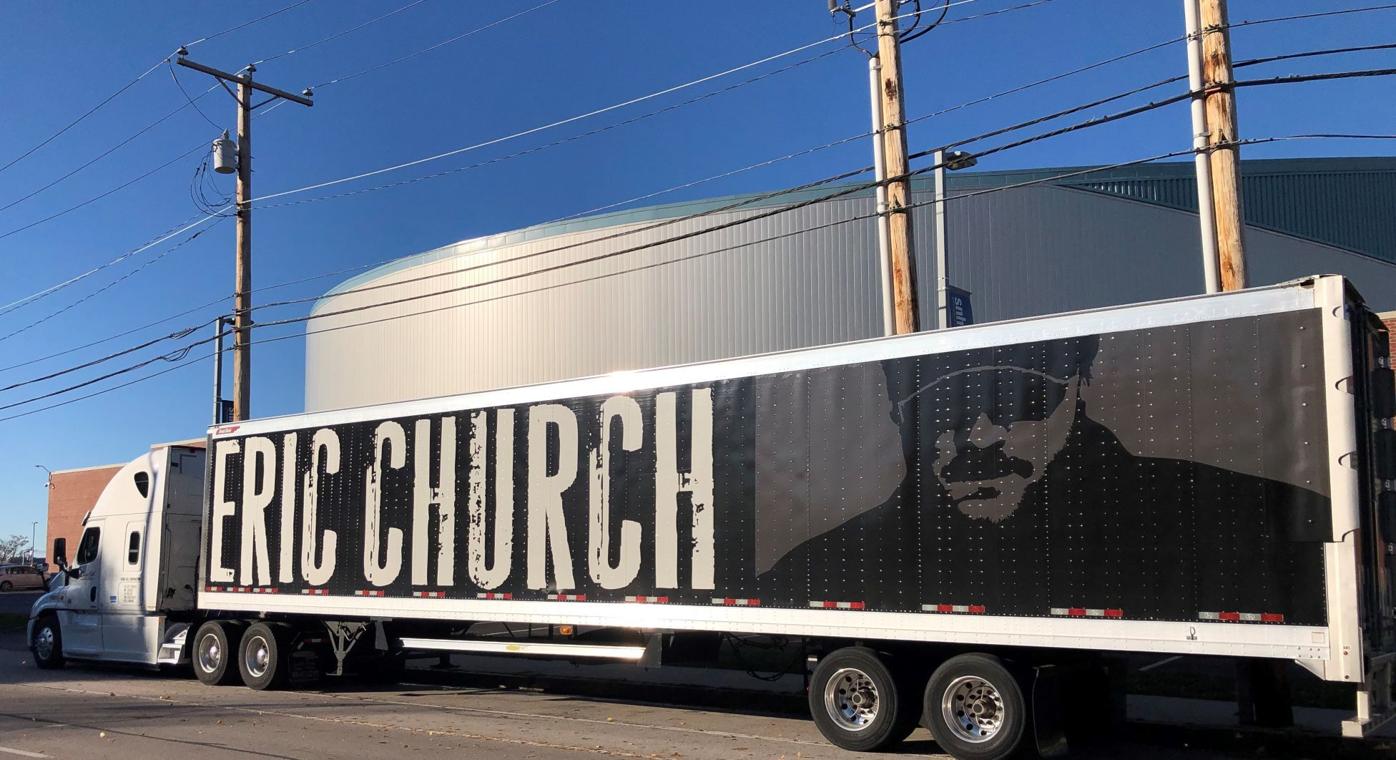 Eric Church’s truck sits outside the SNHU Arena in November 2019. 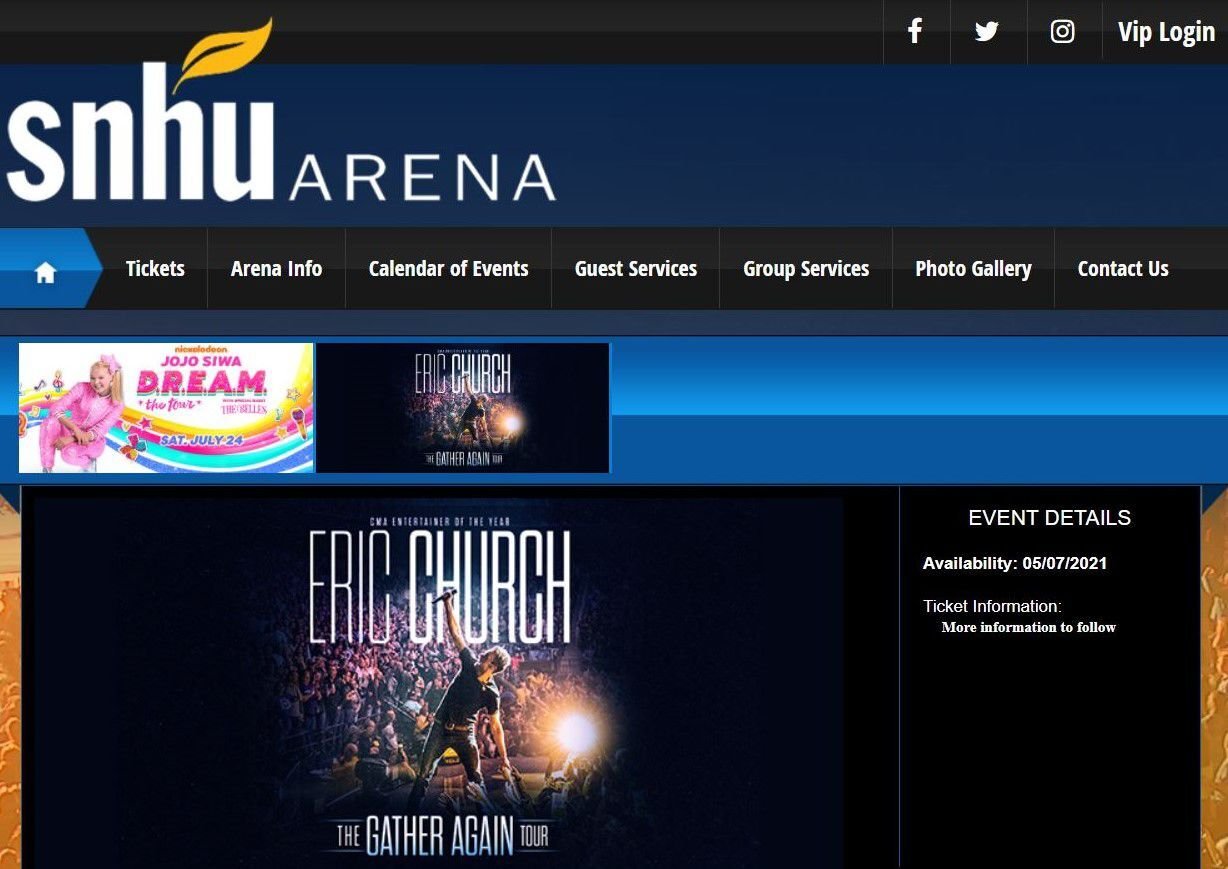 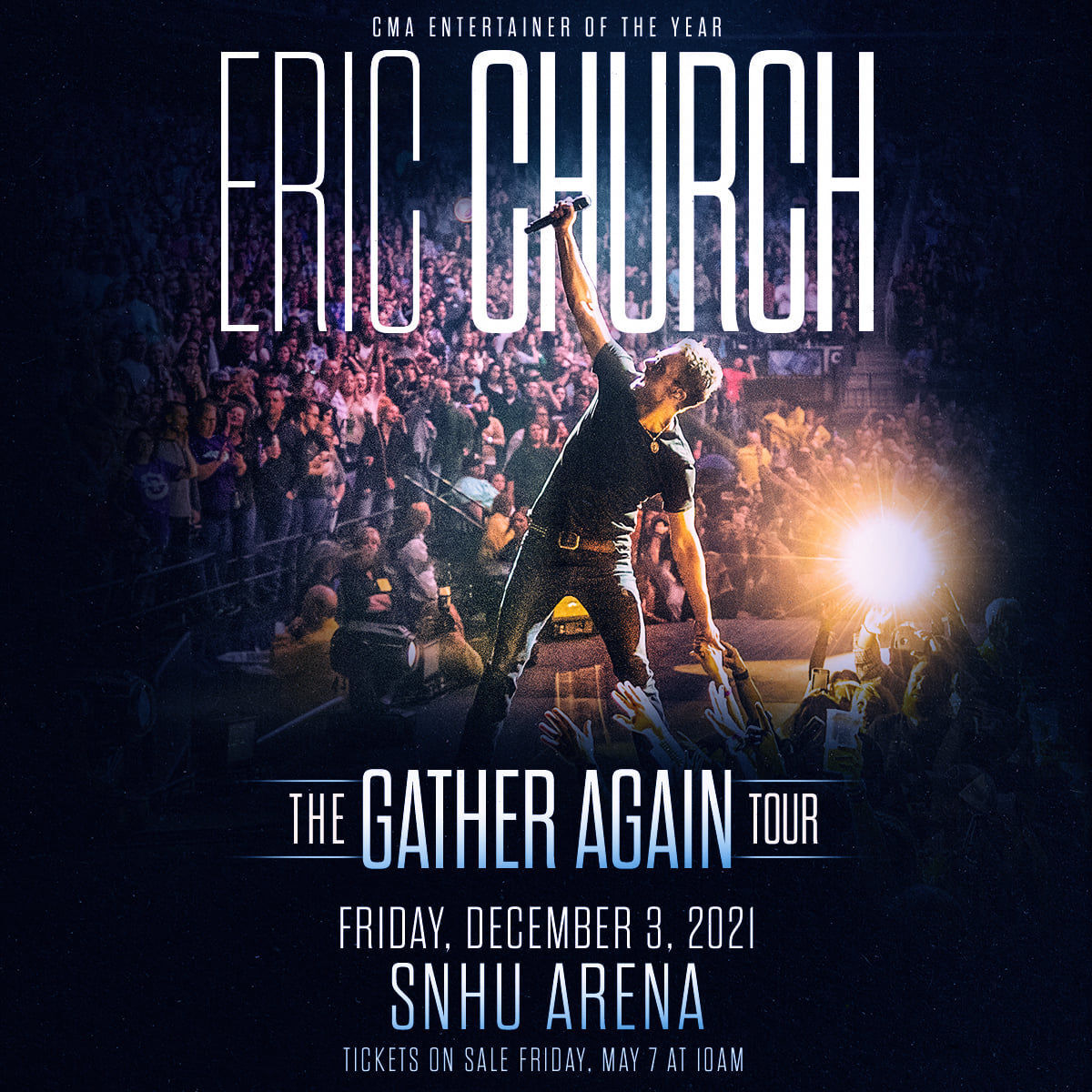 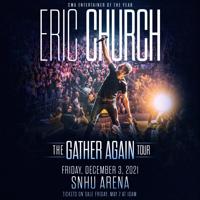 Eric Church’s truck sits outside the SNHU Arena in November 2019.

Although it’s a long way off, the concert announced Wednesday brought hope to city and business leaders. It marks the first major show scheduled at the arena since the COVID-19 pandemic hit more than a year ago.

Tickets for “The Gather Again Tour” go on sale May 7.

Church, the 2020 CMA entertainer of the year, is one of the first musical artists to embark on a nationwide tour. Known for hits such as “Drink in My Hand” and “Springsteen,” he last appeared at the city’s arena in November 2019.

The DoubleTree Hotel already has booked 30 rooms for the night of the concert. Rooms have sold out when Church has performed in the past, said general manager Kim Roy.

“You can only imagine how excited everybody is for this,” she said.

Events at the arena are a huge draw for hotel guests looking to make an evening of going to a concert, especially if they’re traveling. Rooms often are booked for crew members at numerous events throughout the year, Roy said.

“The arena brings us a lot of business,” Roy said. “It is good for downtown in general. People pay to park. People go out to eat before they go to an event.”

Shopper’s Pub + Eatery opened in 2019 in hopes of capturing crowds headed to the SNHU Arena across the street for concerts or who want a drink afterward. It is located next door to the new Residence Inn, which opened in August.

Now both the hotel and arena will be open at the same time.

“The last time (Church) was here that was actually our best night in sales,” said Nick Carnes, the restaurant’s general manager. “His name is just a draw, so the fact that that’s the concert they are announcing is huge for us … I think it is a good sign of what is to come.”

“We’ll definitely notice it. It will double our sales,” Murphy said. “I’m sure all the other restaurant owners downtown are thrilled. After a rough couple of years, it’s what we needed.”

The Gather Again Tour is scheduled to kick off on Sept. 17 in Lexington, Ky., and will stop in 55 cities. According to Church’s website, the tour will rely on each city and venue’s recommendations and guidelines for COVID-19 protocols.

Right now, capacity at indoor performing arts venues in New Hampshire is limited to the number that can be accommodated with at least six feet of distance between groups of people who are together.

Church, who already has been vaccinated, appears in an upcoming public service announcement promoting vaccine education, which is set to be broadcast during the ACM Awards on April 18. He called COVID-19 vaccines a “Godsent miracle,” in a recent interview with Billboard Magazine.

“It became very clear to me that the only way to really get back to normal is through vaccinations,” said Church, whose forthcoming “Heart & Soul” triple album project will be released between April 16 and 20.

Along with arena bookings, the reopening of the Currier Museum of Art, Palace Theatres and the Fisher Cats’ baseball home opener on May 11 are all positive signs, Mayor Joyce Craig said.

“With the warm weather and the increase in vaccinations we’re all hoping to get back to a little bit of what we knew as normal,” said Craig, who is confident arena manager ASM Global will abide by all the restrictions required to host events as the pandemic continues.

“We all need to continue to be vigilant,” she said.

Country artist Brett Young was the last to perform at the SNHU arena, before a sellout crowd on Feb. 14, 2020. Nickelodeon star JoJo Siwa’s tour stop at the arena has been rescheduled for July 24. The event was postponed from last May.

Live performances also are returning to the Palace and Rex theatres in June.

And the DoubleTree is beginning to see increased expo business.

“It gives us all new hope,” Roy said.

Correction: An earlier version of this story contained incorrect information about the state's current restrictions for performing arts venues.