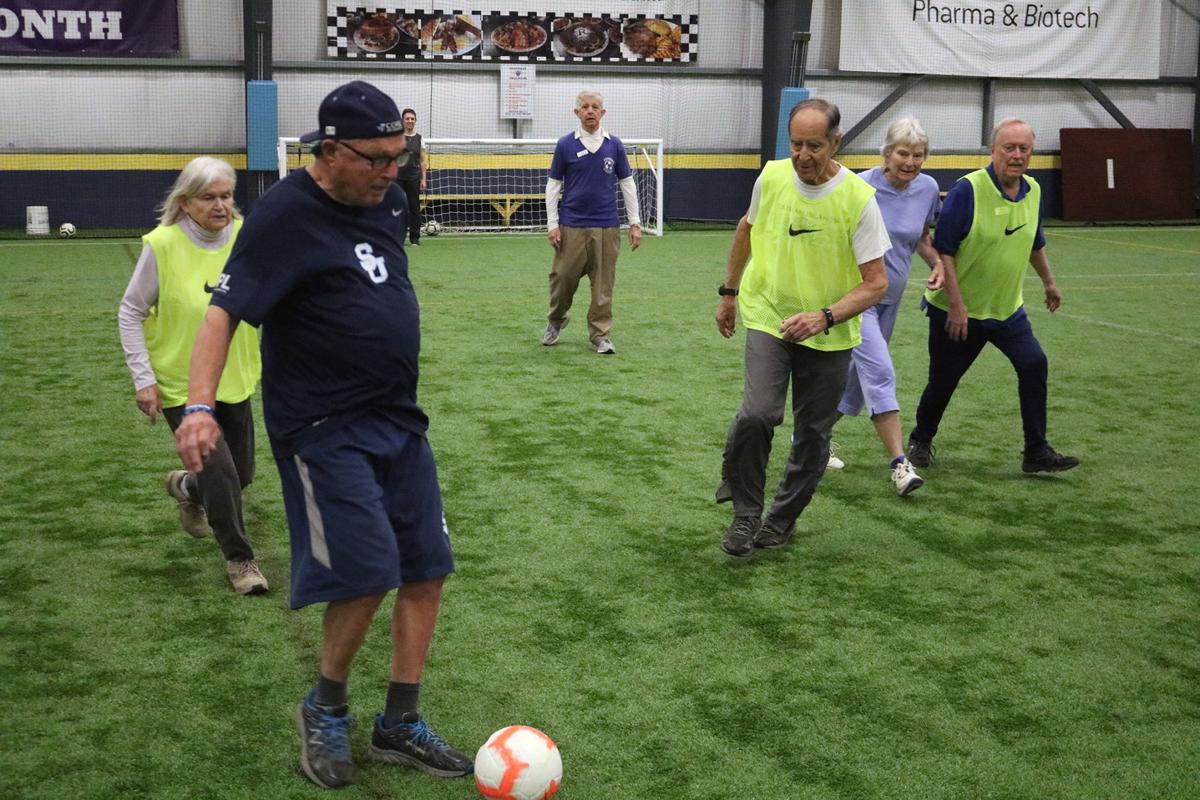 “Coach” Pete Michel does some ball handling while players, including Joe Kasper, back center in one of his 1980s jerseys, and Pete Dunning, third from left, move into position. 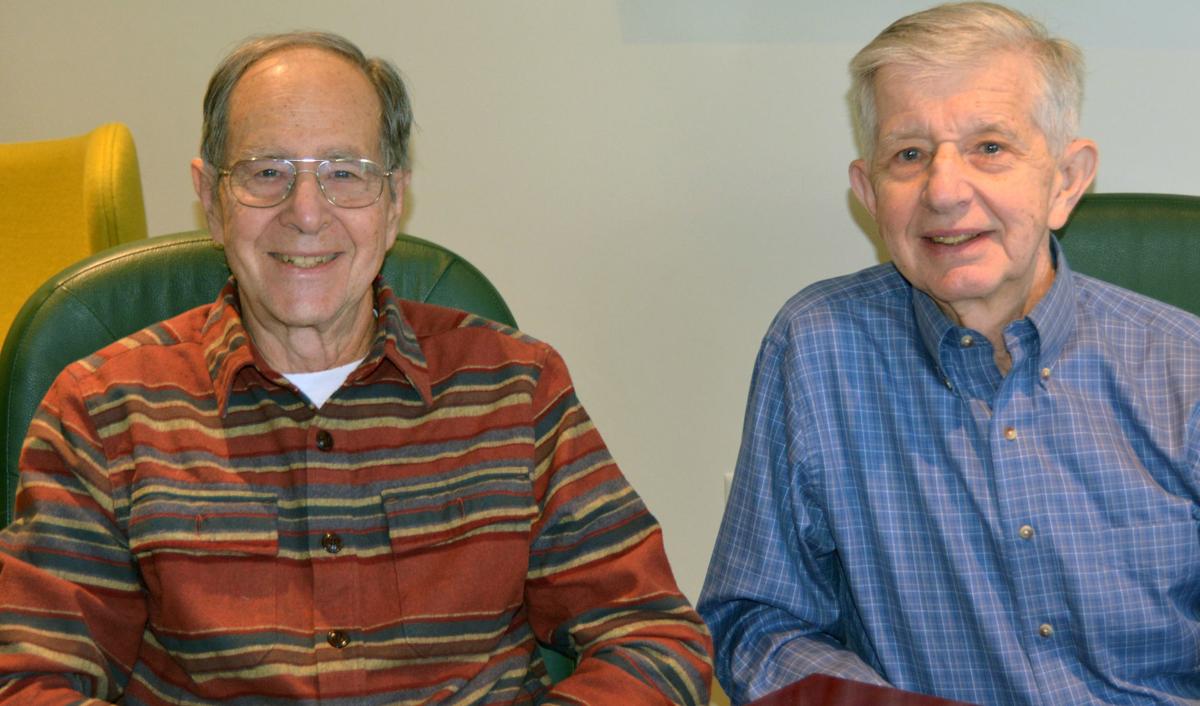 Pete Dunning, 86, and Joe Kasper, 76, residents at RiverWoods Exeter, play off one another in a chat about the Walking Soccer program at Seacoast United’s sports complex in Epping. 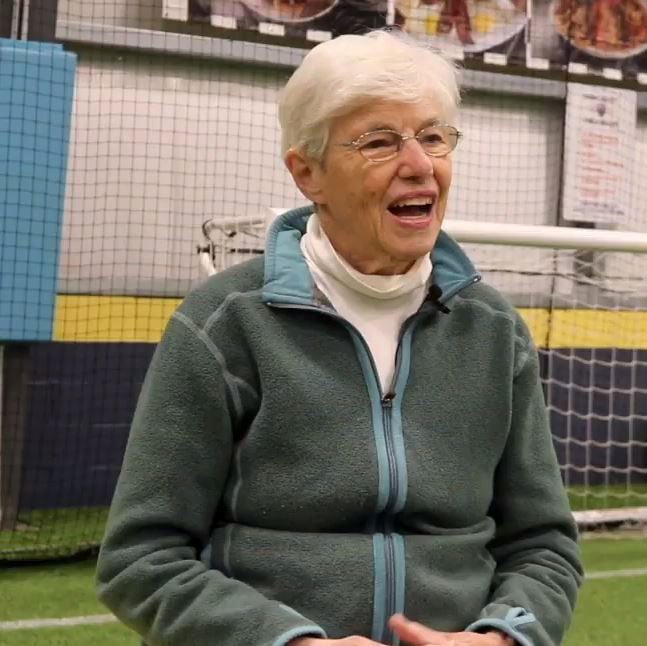 Hannah Clements, 84, is a newcomer to Walking Soccer. She talks about her experiences in a Seacoast United Sports Club video. 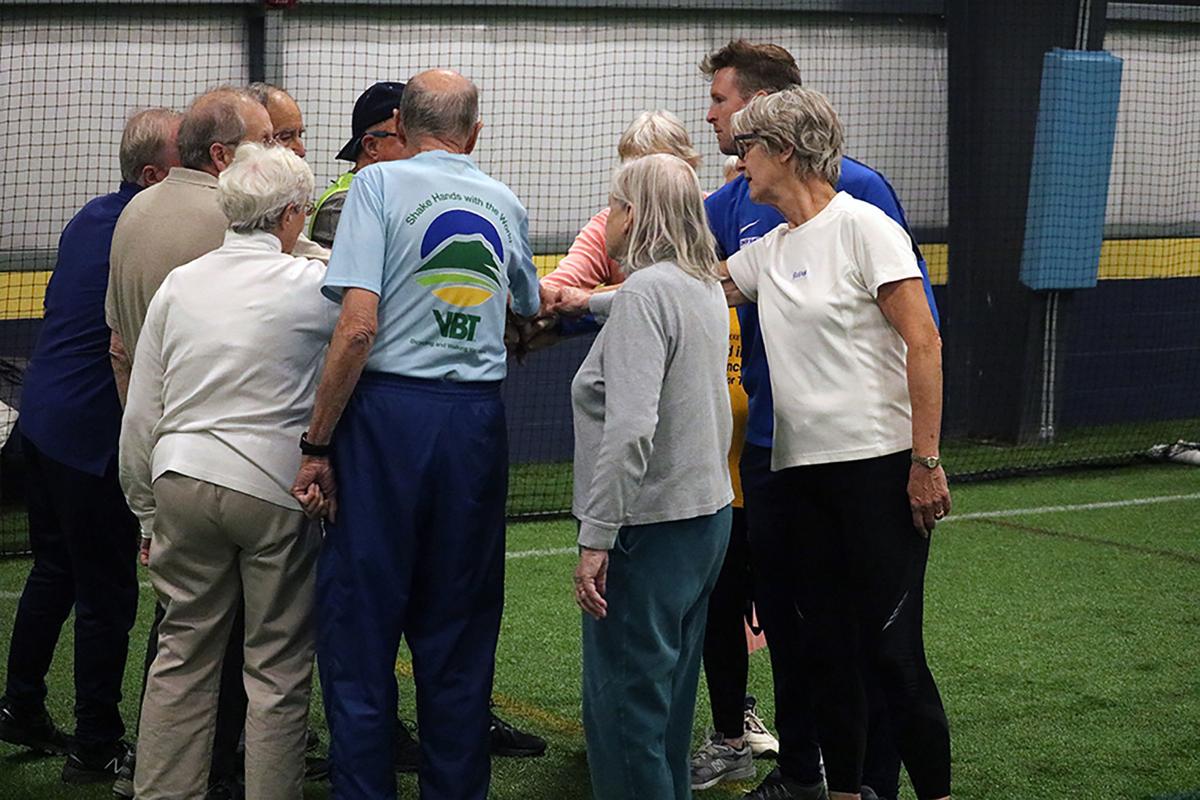 Participants ranging in age from 60 to 95 have tried out the growing Walking Soccer program, and many say it’s the camaraderie of the team sport that has been the most rewarding. 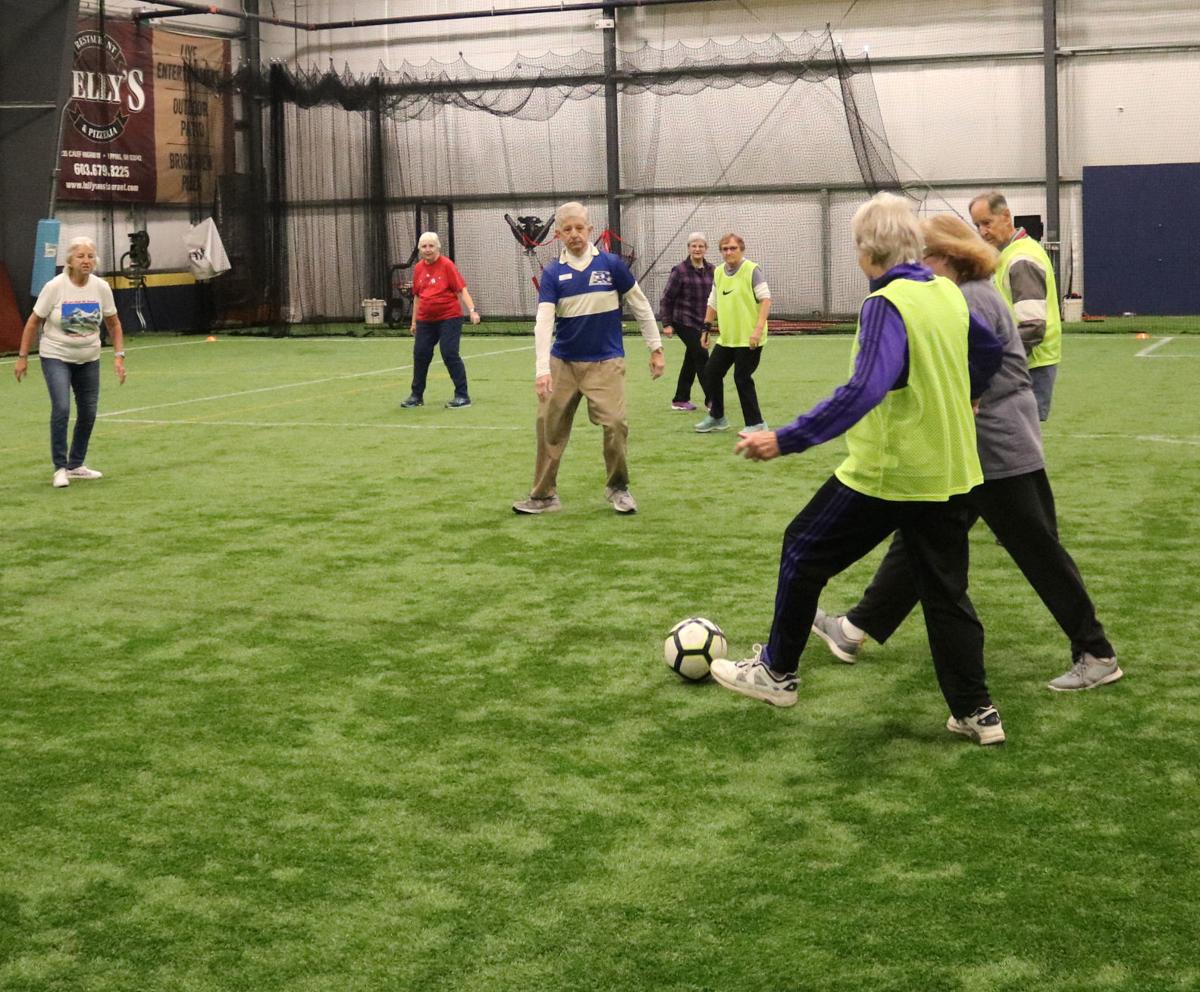 Joe Kasper, at center, motions for the ball in a recent game of Walking Soccer at Seacoast United’s sports complex in Epping.

“Coach” Pete Michel does some ball handling while players, including Joe Kasper, back center in one of his 1980s jerseys, and Pete Dunning, third from left, move into position.

Pete Dunning, 86, and Joe Kasper, 76, residents at RiverWoods Exeter, play off one another in a chat about the Walking Soccer program at Seacoast United’s sports complex in Epping.

Hannah Clements, 84, is a newcomer to Walking Soccer. She talks about her experiences in a Seacoast United Sports Club video.

Participants ranging in age from 60 to 95 have tried out the growing Walking Soccer program, and many say it’s the camaraderie of the team sport that has been the most rewarding.

Joe Kasper, at center, motions for the ball in a recent game of Walking Soccer at Seacoast United’s sports complex in Epping.

Trash-talking may be common in competitive sports, but an exchange between two soccer players in Exeter still comes as a surprise.

The conversation, across a cup of coffee inside a conference room at RiverWoods Exeter, a retirement community, had been cordial. Then Joe Kasper, 76, walks in, levels a gaze and lifts his chin in an air of confident acknowledgement.

“Hey, Pete. I haven’t knocked you over in at least three or four weeks, right?,” Kasper says to fellow resident Pete Dunning, 84.

But the pair’s wry grins and hearty handshake hint at a larger story, one about a newfound camaraderie and an unlikely program that is gaining momentum — and redefining what entertainment and recreation means – among seniors.

It all began in 2018 when James Peterson, sales and marketing director for Seacoast United Sports Club, approached RiverWoods with an unusual idea.

“I said, ‘I know it sounds crazy, but we want to do a Walking Soccer program. It’s soccer, but you have to walk — no running or jogging. We’d love to try it with RiverWoods,” Peterson said.

He teamed up with RiverWood’s fitness director, Heidi Savage, to coordinate an interactive demonstration of the sport at Gooch Park during Active Aging Week, said RiverWoods’ marketing director Adelle Gabrielson.

“We were the first club in the country — outside of a club in Washington — to try it in the U.S.,” said Peterson, who also pitched the idea to other soccer programs at the New England Club Summit earlier this month at the Wentworth by the Sea Hotel and Spa in New Castle.

Based on the initial reception from RiverWoods participants, Seacoast United, which operates five sports facilities in New England for youth and adults, launched its first eight-week session of Walking Soccer at its Epping Sports Complex last fall.

Word spread about the Wednesday morning games, and a second drop-in session got under way Jan. 8, and has been attracting others seniors, including some from Sunrise Sunset Center Activity Center in Newmarket and Cornerstone at Hampton, a retirement and assisted living community.

“The first Wednesday there were eight people, with two coaches jumping in to fill out the field. This past one (the count) was almost 20,” said Peterson. “The youngest has been 60 and the oldest, 95. That it’s taking off is such a rewarding thing. I wholeheartedly think this is one of the most significant things our organization has done.”

Peterson says the social and mental aspects of the program are big selling points.

“It’s a team activity. At this point in life, we don’t have a ton of team activities,” Kasper says. “We used to work — you’d be a part of a team in an office or a factory or whatever ... and that sort of goes away. There’s a great satisfaction that comes from being part of a team. There’s joy in it. And this is bringing it back for me. It feels good.”

Some, like Kasper, who wears favorite league jerseys from the 1980s, and Dunning, who played high school and college ball, have soccer experience while many others are new to the game.

“They swap us around in positions, which is nice,” says Hannah Clements, who, at 84, is just learning how to play soccer.

“I kinda like being in the back field because the pressure isn’t on to score, just to protect the goal,” she says with a laugh. “It’s good exercise. You get plenty of exercise walking around fast, and it’s good for your brain to figure out, ‘OK, it’s coming at me, now what am I going to do with it, and boom, you see a person right in front of you to pass to.”

Though it’s designed as a limited contact form of soccer, “some people do take a tumble,” said Clements, who played field hockey in her youth and takes strength and balance fitness classes and walks her yellow lab, Hailey, at RiverWoods.

Walking soccer is just what it sounds like – it operated on the basic tenets of soccer but players have to walk instead of run. Plus, there are no off-sides rulings, and the ball can’t be played higher than the knee, or else there is a free kick is given to the other team.

“Keeping the ball below the knee takes away those whack-in-the-face moments,” says Kasper.

It also makes the game more focused on passing than booting the ball up field for a sprint to the goal. Peterson calls it a more strategic possession game, in which players move the ball in thirds, utilizing the goalie as an extra player.

“We don’t look for physical contact, but it occurs occasionally,” Dunning adds with a laugh. “When I was playing in school, it happened on purpose.”

Thankfully, the trio says, the cushioned indoor surface of the playing field at Seacoast United makes for a softer landing.

“I’ve seen a lot of quick stepping out there,” Gabrielson chimes in. “You all are constantly reigning yourselves in. There’s a lot of shuffling. Sometimes (a player or a ref) calls out a little reminder —walk, don’t run!”

Dunning and Kasper have that competitive edge and off-field ribbing from earlier soccer days, yet neither had touched a soccer ball in quite some time — Kasper in the past 10 years and Dunning for closer to 20.

Dunning, who grew up in Newbury, Mass., jokes that he went out for football as a freshman at what was then Governor Drummer Academy, a boarding school in Byfield, Mass., but his skinny frame hadn’t been the right build for the sport.

Ten pounds heavier as a sophomore, he decided soccer might be a better fit. He moved onto varsity soccer in junior and senior years, and college play came next.

More recently, Dunning rendered people speechless by using his head to redirect some balls up field at a Walking Soccer game.

“I got the attention of the guy running the program by doing a couple of headers,” Dunning says, a smile tugging at the corners of his mouth.

“Oh, that was you?,” Gabrielson says, laughing. “I have that on video. That made it on the Facebook page.”

She explains to a visitor what happened: “He’s just off camera. You hear a thunk and everyone go, ‘Whoa!’ You can see the ball fly overhead.”

Dunnings’ wife, Jackie, is a recent convert to the game of soccer, but Dunning promises he isn’t doing any critiquing.

“Well, of course, you have to be careful giving your wife pointers,” Dunning says of maintaining marital harmony.

In Kasper’s case, he didn’t find a footing on the soccer field until he was a dad.

“I grew up in a lacrosse state (Maryland). Soccer was defined in junior high school when the gym teacher came outdoors with all us boys and said, ‘This is a soccer ball. You’re going to see it once and then we’re going to put it away,’” says Kasper.

But after he became a New Englander and his daughter started playing soccer at about 9 years old, Kasper became a fixture on the sidelines, joining other parents in calling out direction.

“At one point the coach came over and said, ‘You don’t know what you’re talking about. Have any of you played soccer?’ The answer for most of us parents was, ‘No,’” Kasper says. “So they started a summer parents league, and said, ‘Come on out and show us what you think you’re good at.’”

That minimal-contact introduction to soccer led him to an over-30s league in Andover, Mass., where he was hooked on the game.

“It was just a blast. I had the good fortune to be on a team with, let’s see … 13 doctors, I was the rocket scientist, and we had a lawyer. The docs covered every specialty so whatever happened on the field, (we) were covered,” Kasper jokes.

The Walking Soccer program has given him a chance to meet more people, not only from other communities but from within RiverWoods, too, since there are about 650 residents living on three campuses there.

“Word has been spreading,” he says. “I’ve been proselytizing. It’s fun. It’s good exercise. And no one’s gotten seriously hurt.”

Which brings up the sense of humor that seems to filter through conversations between the players. When Dunning starts talking about disrupting a tough Latin American team’s quick passing game for a win back in the day, Kasper helps explain the strategy.

“A lot of players don’t like to be marked that tightly, so you lean on their best player. And if you work really hard at it, they will get so ticked off that they will attempt to kick you and then get red-carded (for a foul). Get them angry, and they’ll do something stupid, and goodbye,” Kasper said, drawing a complicit laugh from Dunning.

Though a former pro soccer player from England recently joined one of the Walking Soccer games, Dunning said it’s mostly amateurs showing up to play, and it’s fairly split between men and women. And the newcomers are taking it in stride.

Coach Pete is Peter Michel, who founded the New England Club Baseball Association and has been active in youth programs including Seacoast United Baseball.

“He has been a fan favorite among the (Walking Soccer) players, with his outgoing personality and ability to cheer everyone up,” says Seacoast United marketing associate Bryan Butt.

A plus is the timing of the games, which start at 9 a.m. on Wednesdays.

“That the fun of playing Walking Soccer: you get excused from doctor’s appointments to play," Kasper said.