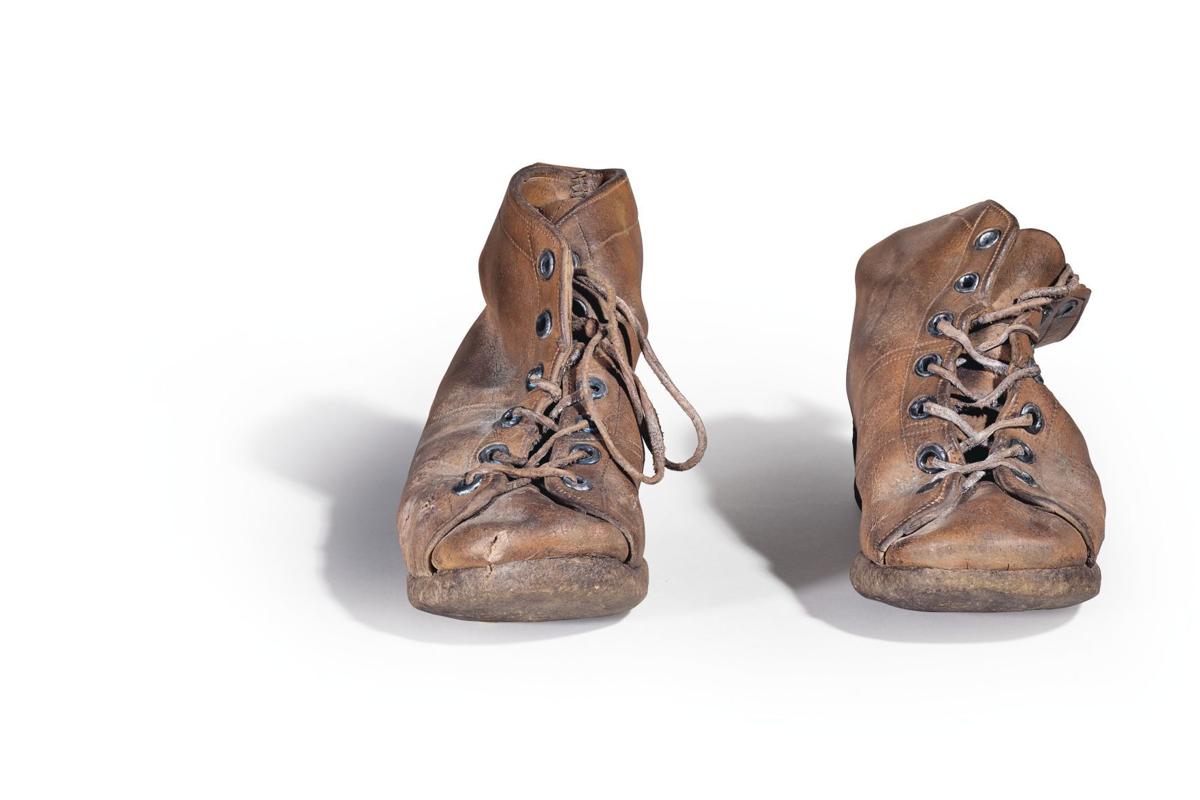 Sculptor Marilyn Levine created “Maki’s Boots” in 1974, out of clay. The Currier Museum of Art in Manchester walked the seemingly worn pair of leather shoes into its collections through the Ed and Mary Scheier Acquisition Fund in 2015. 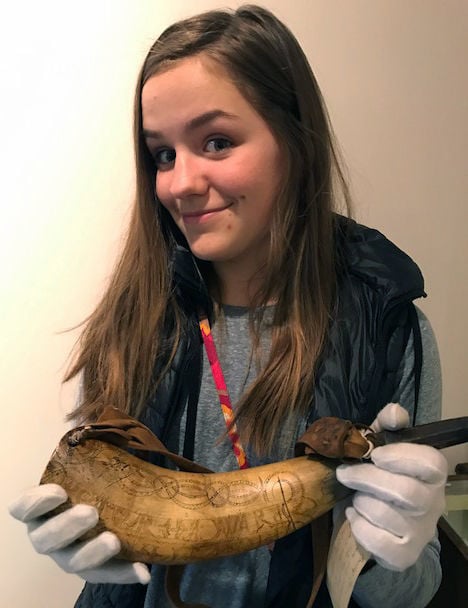 Adelyne Hayward, a direct descendant of Surry’s first resident, Peter Hayward, holds a powder horn engraved with his name and the year 1757, when it would have been used to hold powder for his musket in war time. The artifact is part of the collection of Historical Society of Cheshire County in Keene. 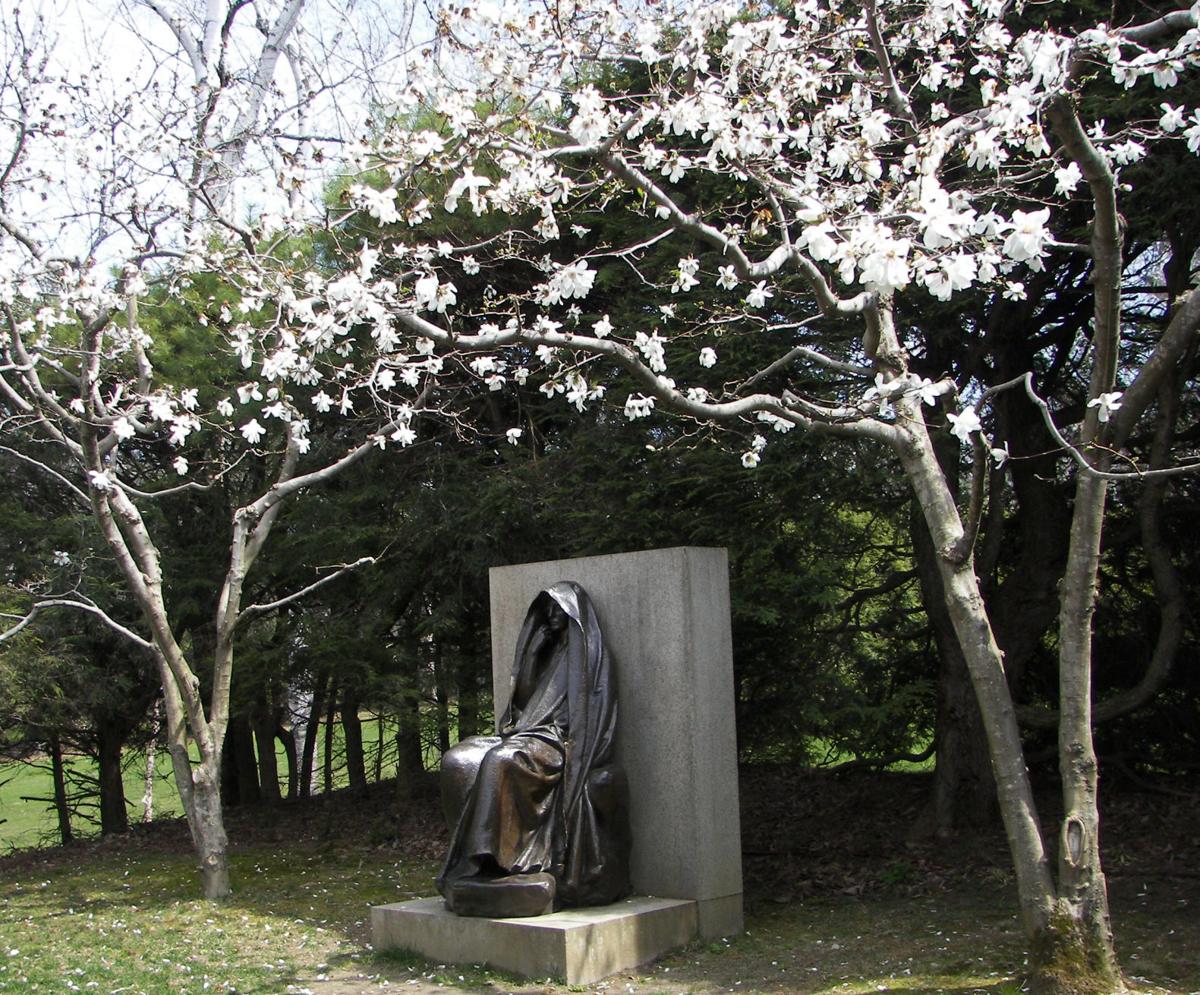 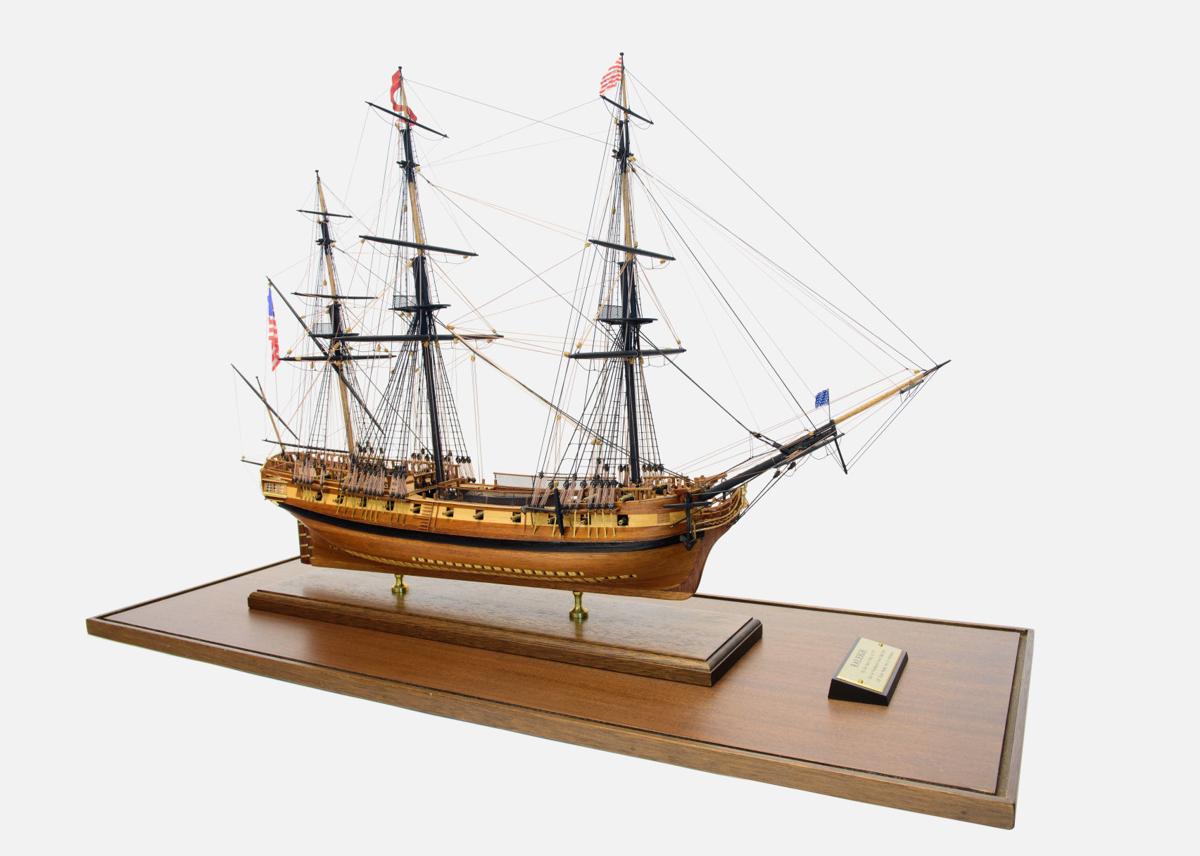 This model the Raleigh, the ship built in Portsmouth that is pictured on the New Hampshire State seal and flag, is displayed at Strawbery Banke Museum in Portsmouth. 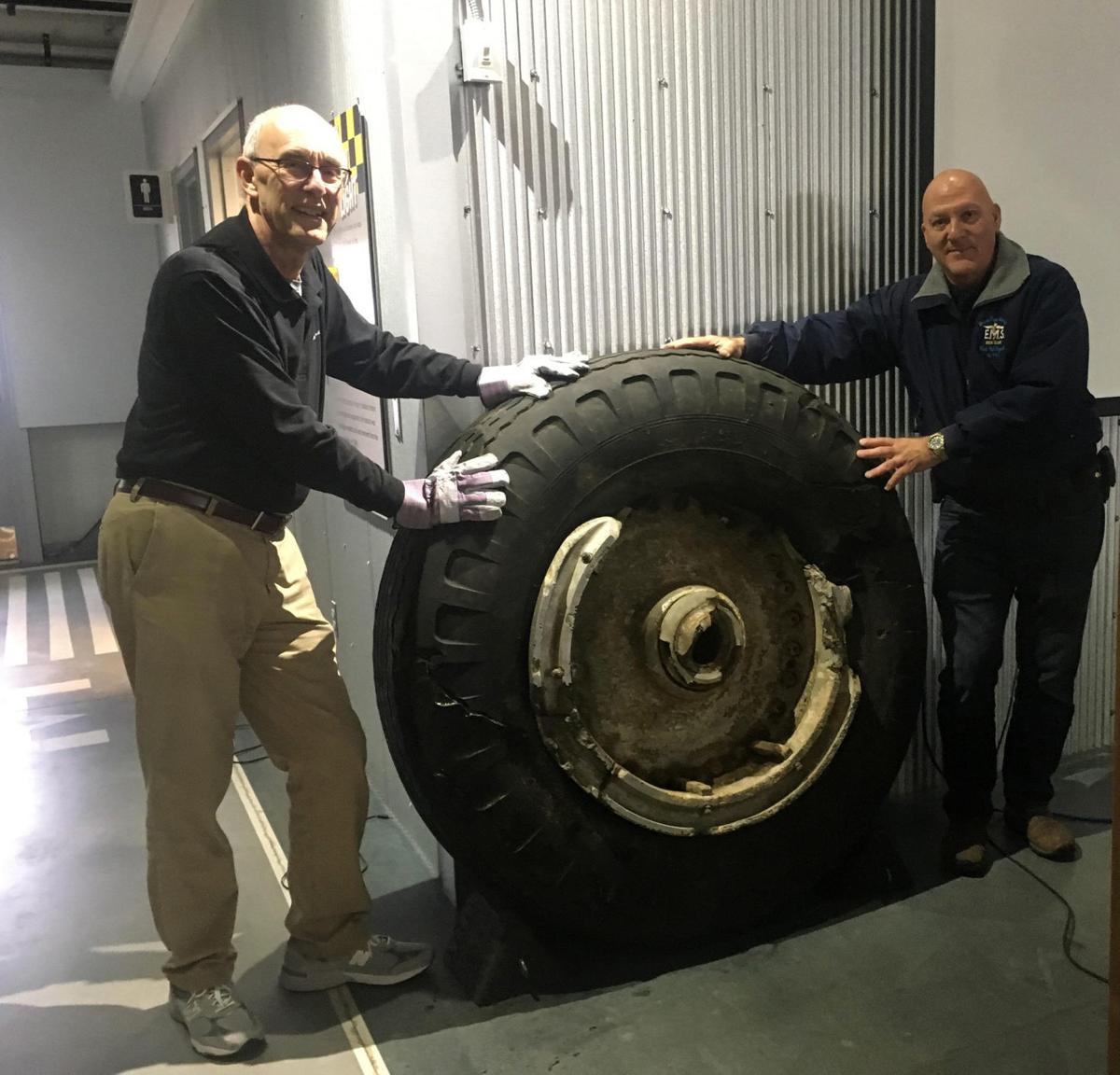 Aviation Museum of New Hampshire volunteer Wendell Berthelsen, left, poses next to a 500-pound wheel and tire from a B-52 bomber with Bill Kolias, a freelance investigator who in 2019 reconstructed the events leading up to the bomber’s crash in Fremont in 1959. 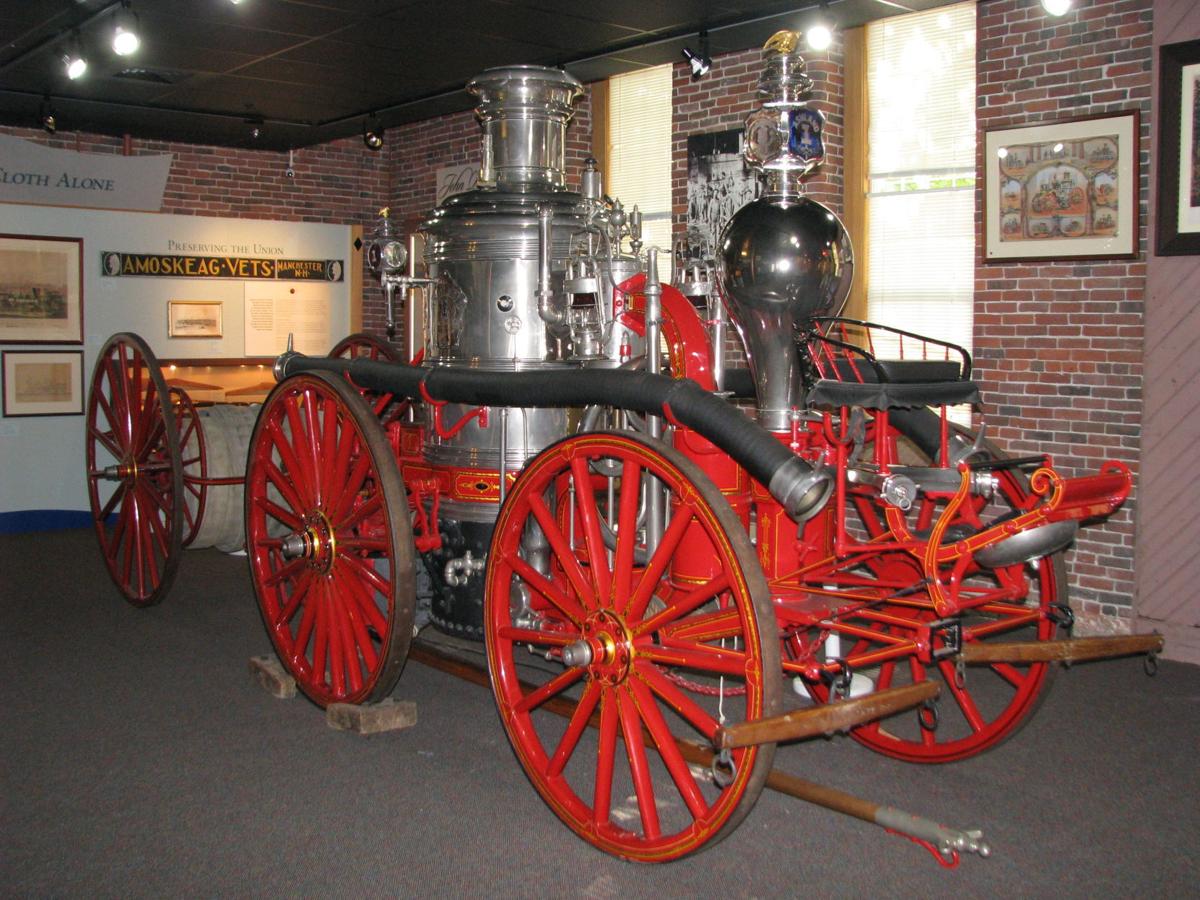 Amoskeag Steam Fire Engine #369 was built in 1871 by the Machine Shop of theAmoskeag Manufacturing Company for the town of Ashland, Mass. New Hampshire Insurance Group purchased the engine, along with its hose reel, in 1962, and brought it to the Queen City. Restored in the 1980s, the items were donated to the City of Manchester in the early 1990s.

Granite State treasures come in all shapes, colors and sizes, from a celebrated Cornish sculpture of a shrouded figure to a huge aircraft tire that marks a close call for a group of airmen.

Though their doors are closed for now, museums and historical sites across New Hampshire are hoping to do more than bridge the standstill of social distancing. They’re connecting with communities through a host of online programming that gives patrons glimpses of their favorite sights and potential visitors reasons to stop by once COVID-19 restrictions are lifted.

NHWeekend checked in with a half-dozen sites for a peek at some of their treasures.

Stepping into the Currier

Were these boots made for walking? Yes ... and no.

Believe it or not, these boots, crafted in 1974 by the late Marilyn Levine, are made out of clay. Levine is known for her trompe l’oeil (optical illusion) ceramic works of leather objects — especially shoes and jackets.The sculptor carefully modeled the clay’s surface and then painstakingly applied color to mimic the surface of worn leather. She was interested in capturing a sense of how the surface of leather changes. The seemingly worn-in pair of shoes also features laces made from leather.

Titled “Maki’s Boots,” they are part of the Currier Museum of Art’s collection and were purchased through The Ed and Mary Scheier Acquisition Fund.

It fell from the sky

The Aviation Museum of New Hampshire in Londonderry is home to an enormous tire that was part of the landing gear of a B-52 Stratofortress that in 1959 crashed in Spruce Swamp in Fremont.

The crew, on a Cold War training mission from Westover Air Force Base in Chicopee, Mass., parachuted to safety prior to impact, making it the first B-52 crash with no loss of life.

The tire, which weighs 500 pounds, was sheared off from the rest of the landing gear and eventually retrieved from the swamp.

At the Millyard Museum in Manchester, the top draw is a 6,000-pound marvel: the 1871 Amoskeag Steam Fire Engine #369. It was built by the Machine Shop of the Amoskeag Manufacturing Company — along with its dedicated hose reel — for the town of Ashland, Mass., where it was dubbed Ashland No. 1.

Since being donated by the City of Manchester in 2003, the engine has been a “show stopper” at the museum, said John Clayton, executive director of the Manchester Historic Association and former Union Leader columnist.

The inventor of the first Amoskeag Steam Fire Engine was Nehemiah S. Bean, who supervised the design and production of the steam fire engines for the Amoskeag Manufacturing Company for many years. Before the company’s fire engine operation was sold to the Manchester Locomotive Works in 1876, the operation manufactured 550 Amoskeag steam fire engines.

These were considered among in the world, and were sold throughout the U.S. and in Canada, Europe, Russia, China, Australia, Peru and Chile.

Standing in tribute to a real-life love story and the genius of one of the country’s greatest sculptors and monument makers, the outdoor Adams Memorial at the Saint-Gaudens National Historic Park in Cornish is an enigmatic bronze sculpture of a purposefully androgynous figure.

The startling detail — from the hand raised to one cheek to the flowing garments on the seated figure — is captivating. To a visitor, it feels like rounding a corner in the garden and coming upon someone deep in thought. For some, there is a sense of serenity and solace in the stillness, though others also sense grief and weighted resolution in the expression and unguarded posture.

Still, when Henry Adams commissioned Saint-Gaudens to create a monument to his wife, Marion Hooper Adams, who died at age 42, Adams wanted to convey her spirit in a positive way. The Cornish sculpture’s 1891 counterpart is in Rock Creek Cemetery in Washington, D.C.

“The seated figure was designed to include elements of male and female and all religions. For Adams, it was a figure of hope and joy rather than sadness, and he visited it often,” said Henry J. Duffy, curator of the Saint-Gaudens historical site.

Though the preserved home and studios of Saint-Gaudens (1848-1907) are closed to the public at this time because of the pandemic, visitors can walk the historic site’s grounds to see some of the brilliant outdoor sculptures, including The Shaw Memorial, in garden settings. Saint-Gaudens lived here seasonally starting in 1885 and then year-round from 1900.

Alan F. Rumrill, the executive director of the Keene-based Historical Society of Cheshire County, chose to highlight an artifact with historic ties to the state. ]

This 1757 powder horn bears the name of the first settler of Surry, Peter Hayward, who opened the first tavern in town in 1765 at his house (which still stands).

Hayward served in the French and Indian Wars and the American Revolution, and would have carried powder for his musket in the horn, which is decorated with three deer and other designs. It is engraved with the words ‘“Peter Hayward, His Horn, 1757.”

A model of the Raleigh, the Portsmouth-built warship pictured on the New Hampshire seal and flag, is part of Strawbery Banke Museum’s ongoing exhibit “Port of Portsmouth: War, Trade and Travel.”

The exhibit, which also includes a diorama of shipyard during the Raleigh’s construction, focuses on the maritime history of Portsmouth and surrounding Seacoast areas.