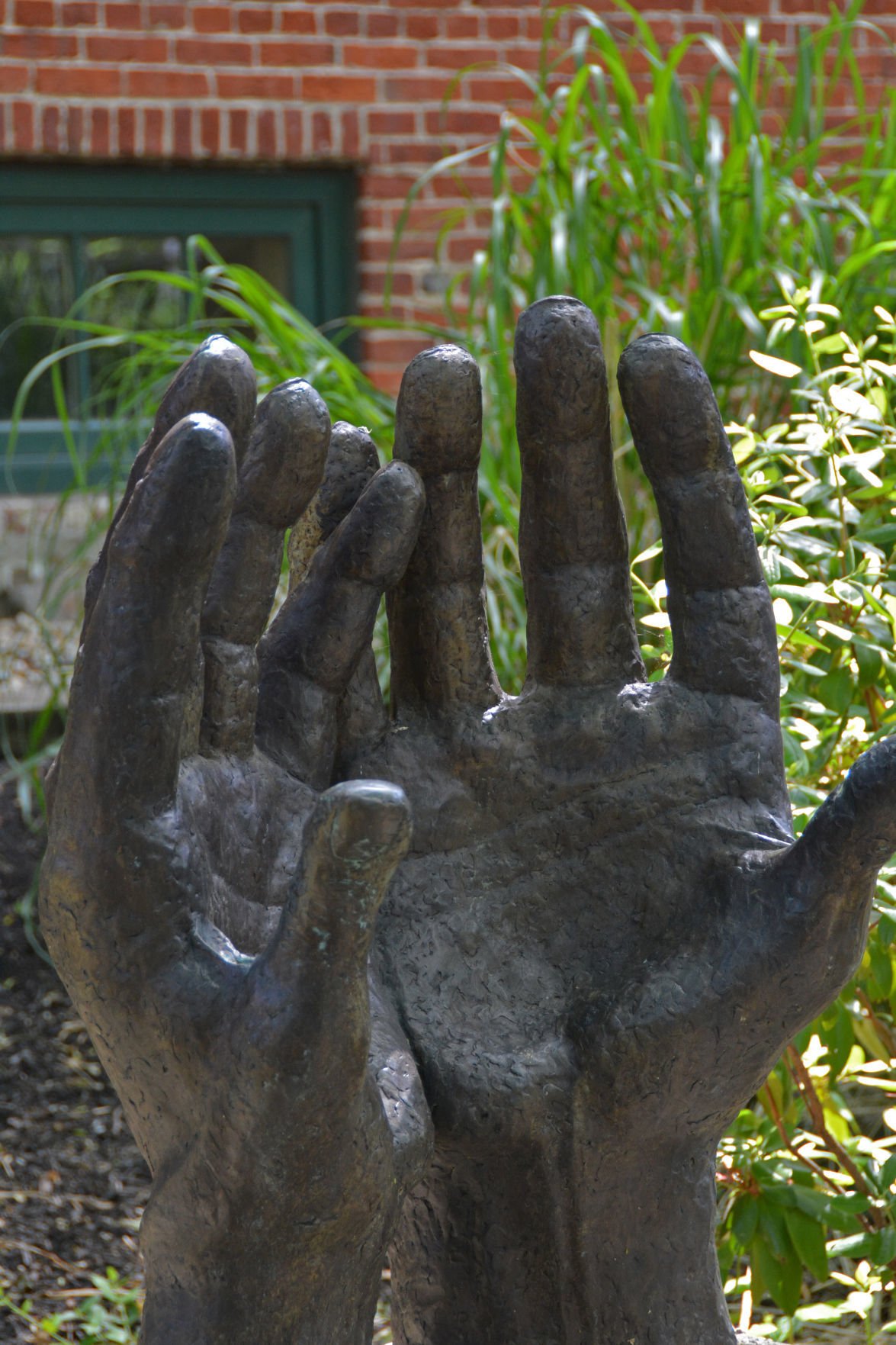 The late Sumner Weinbaum sculpted the bronze hands that rest atop a stone base carved with a single word — “Hope.” 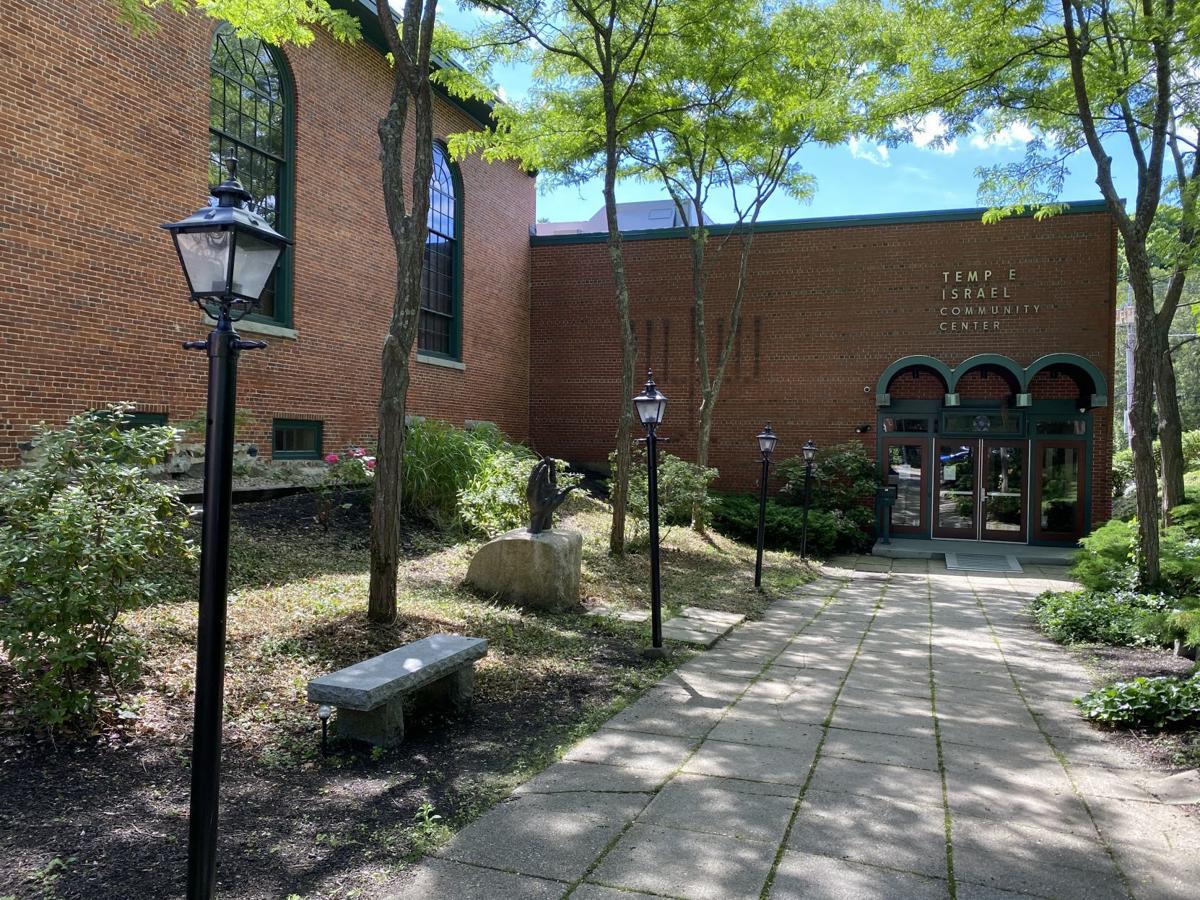 A canopy of trees over a small courtyard to the side of Temple Israel and in front of the synagogue's community center off State Street in Portsmoiuth sends dappled sunlight over a stone walkway and an unusual bronze sculpture of a pair of hands. 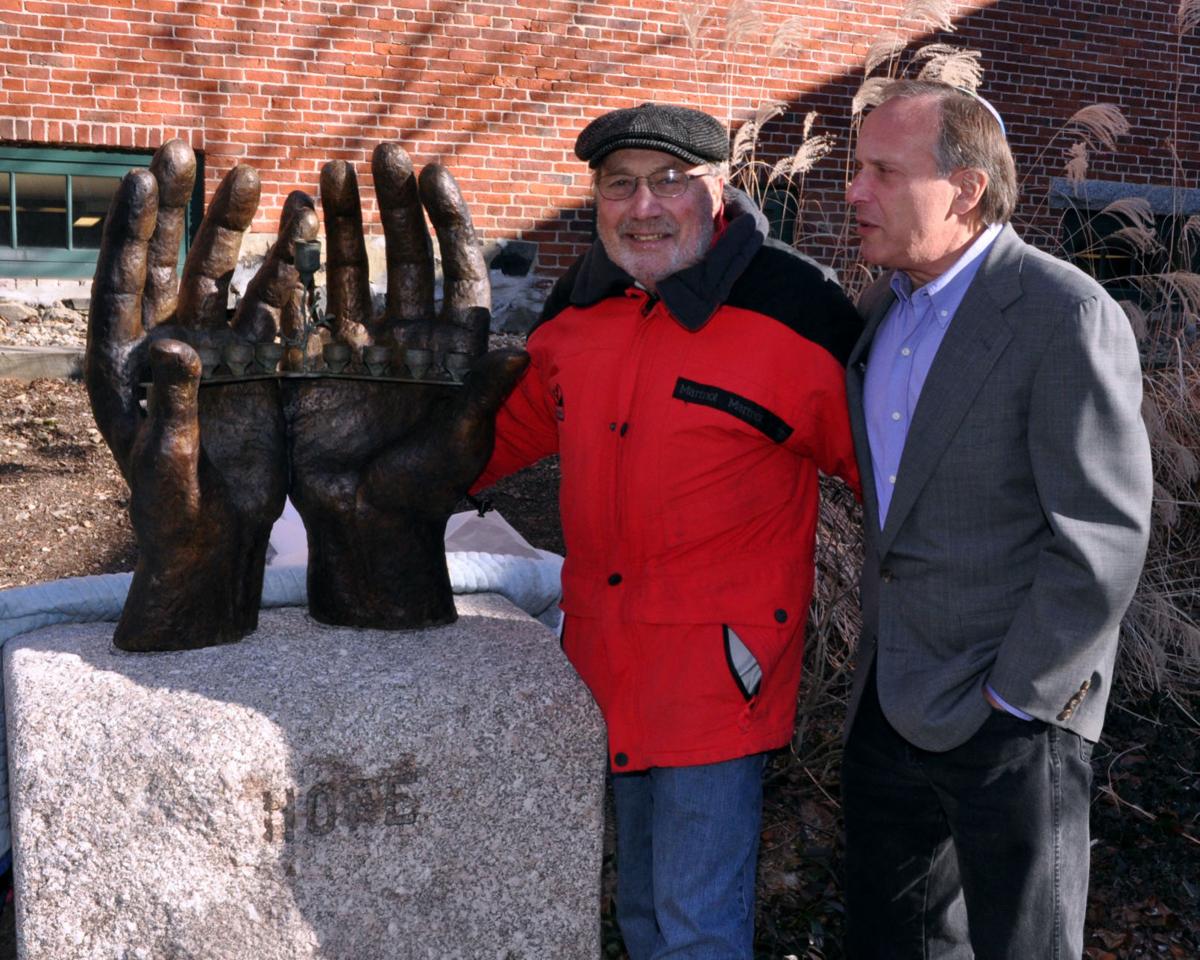 In this archived picture, the late Sumner Weinbaum, left, who sculpted the bronze piece known as the “Hands of Hope,” stands in the courtyard of Temple Israel on State Street in Portsmouth, along with Barry Krieger, who served as rabbi there from 2009 to 2013.

A handful of years ago, I was walking down a sidewalk on State Street in Portsmouth when I noticed a small tree-lined courtyard tucked to the side of Temple Israel.

On a sun-drenched summer day, the partially shaded alcove looked inviting against the backdrop of the historic brick synagogue and its arched glass windows. The small trees lining the stone walkway threw flickering shadows on a walkway of square paving stones and green plantings outside the synagogue’s adjacent community center.

But what had captured my attention was an unusual focal point — two large bronze hands reaching up from a stone base. Up close, there was something unexpectedly compelling about it — the palms were grooved with time-worn lines, but they didn’t seem to hold that weary tension about them. The fingers gently stretched upward, the pinkies partially overlapped. A single word was inscribed on the base: “Hope.”

The late sculptor Sumner Winebaum, who was a longtime member of Temple Israel, created the piece, and it’s become something of an interfaith symbol of unity over the past decade.

“Every year we have a community candlelight vigil for peace during Hannukah,” said the synagogue’s interim rabbi, Ira Korinow. “We all gather together and share some thoughts on peace. This past year there were about 100 people there. There are a few dozen members from Temple Israel there but also a good deal of people from the Portsmouth community and several ministers who share some thoughts on the (concept) of peace. We recite blessings and sing songs.”

Korinow, who plans to retire at the end of the month, stepped into his role at the synagogue when Rabbi David Ross Senter died in 2017. Two years later, at another memorial, Korinow remembered longtime temple member Winebaum as “a man guided by a spirit of enthusiasm and optimism.

“He was a creative, free-spirited motivator who made an indelible impression upon so many during his lifetime, as a journalist, writer, businessman, sculptor and philanthropist,” Korinow said in his 2019 eulogy of Winebaum.

Winebaum grew up in Portsmouth, where his family owned a newspaper and magazine delivery service, Korinow said. After studying at the University of New Hampshire, University of Southern California and the University of Michigan, Winebaum headed to New York, where as a copywriter and account executive for the advertising company Young and Rubicam, he worked on early TV commercials for clients Johnson and Johnson, General Foods and General Electric.

Later he returned to Portsmouth to lead the business his father, Harry, had started — Winebaum News, which represented national and regional publications including The Boston Globe, New York Times, Hearst Magazines and TV Guide. Winebaum retired in 1994.

The fellow with a gift for gab was active at Temple Israel, serving on its board of directors and making a major contribution to the renovation of the community center, social hall and Hebrew School wing at Temple Israel in the early 2000s with the donation of the so-called “shmoozatorium.”

In addition to sculpting the “Hands of Hope,” Winebaum crafted a metal Hanukkah menorah to fit into the open hands. Winebaum also created commissioned pieces for Young and Rubicam in New York City, and York Hospital and the Japanese American Society.

I haven’t seen any of those pieces, but I still make it a point to stop in that courtyard for a few minutes whenever I’m on the Seacoast.

On a recent visit, two people are reading on benches near the sidewalk when I make my way into the empty alcove. The familiar sight of the oversized hands strikes me as especially poignant in a time when the Covid-19 pandemic has had people both avoiding handshakes and searching for connection.

Though Temple Israel’s doors have been closed since March 13, when programming went online in the midst of the pandemic, the “Hands of Hope” sculpture can be seen outside the synagogue at 200 State St., Portsmouth.