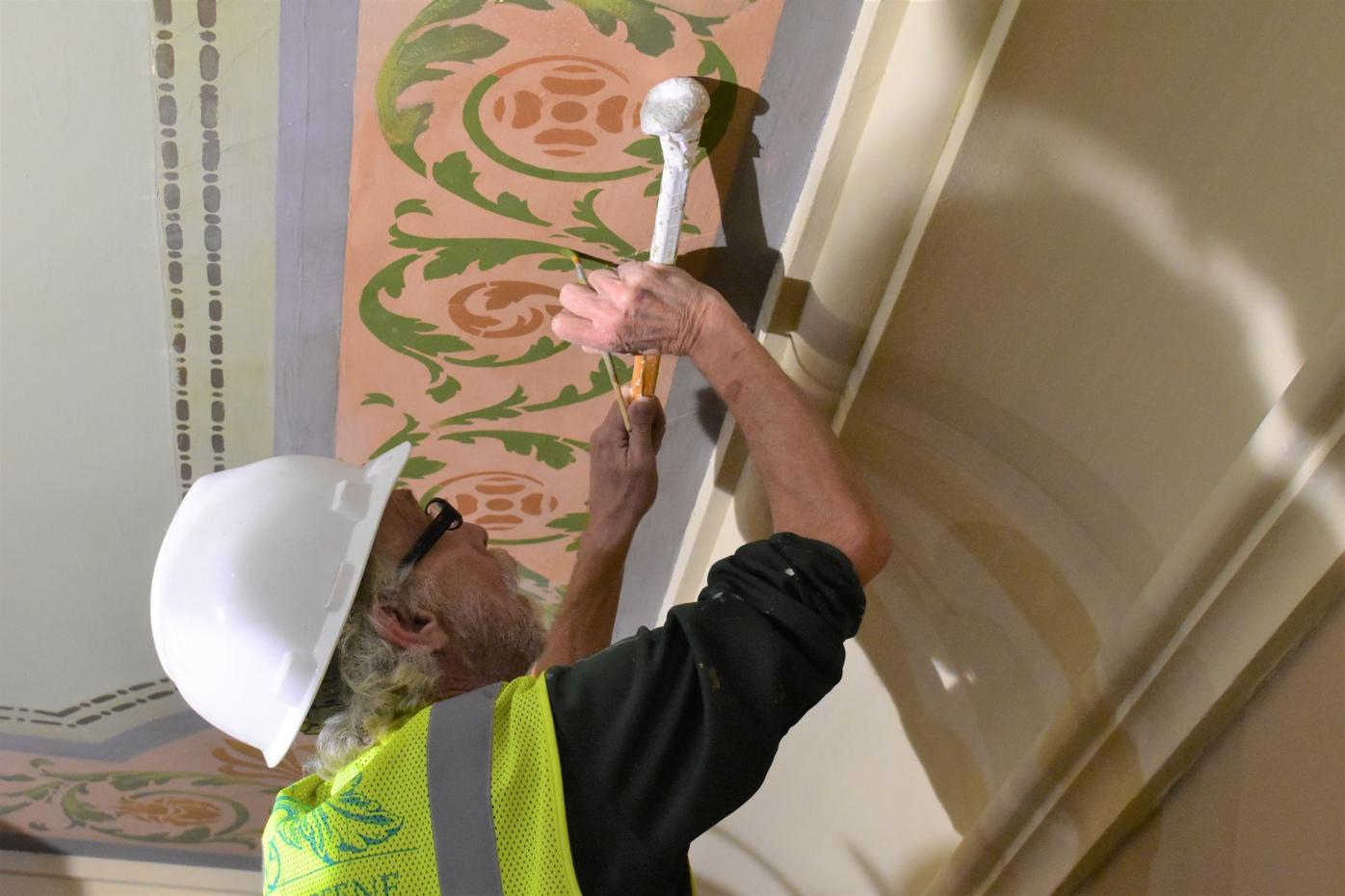 Jed Ellis paints the highlights of a border on the ceiling at the Colonial Theater in Laconia in May as part of its restoration into a 750-seat civic auditorium. 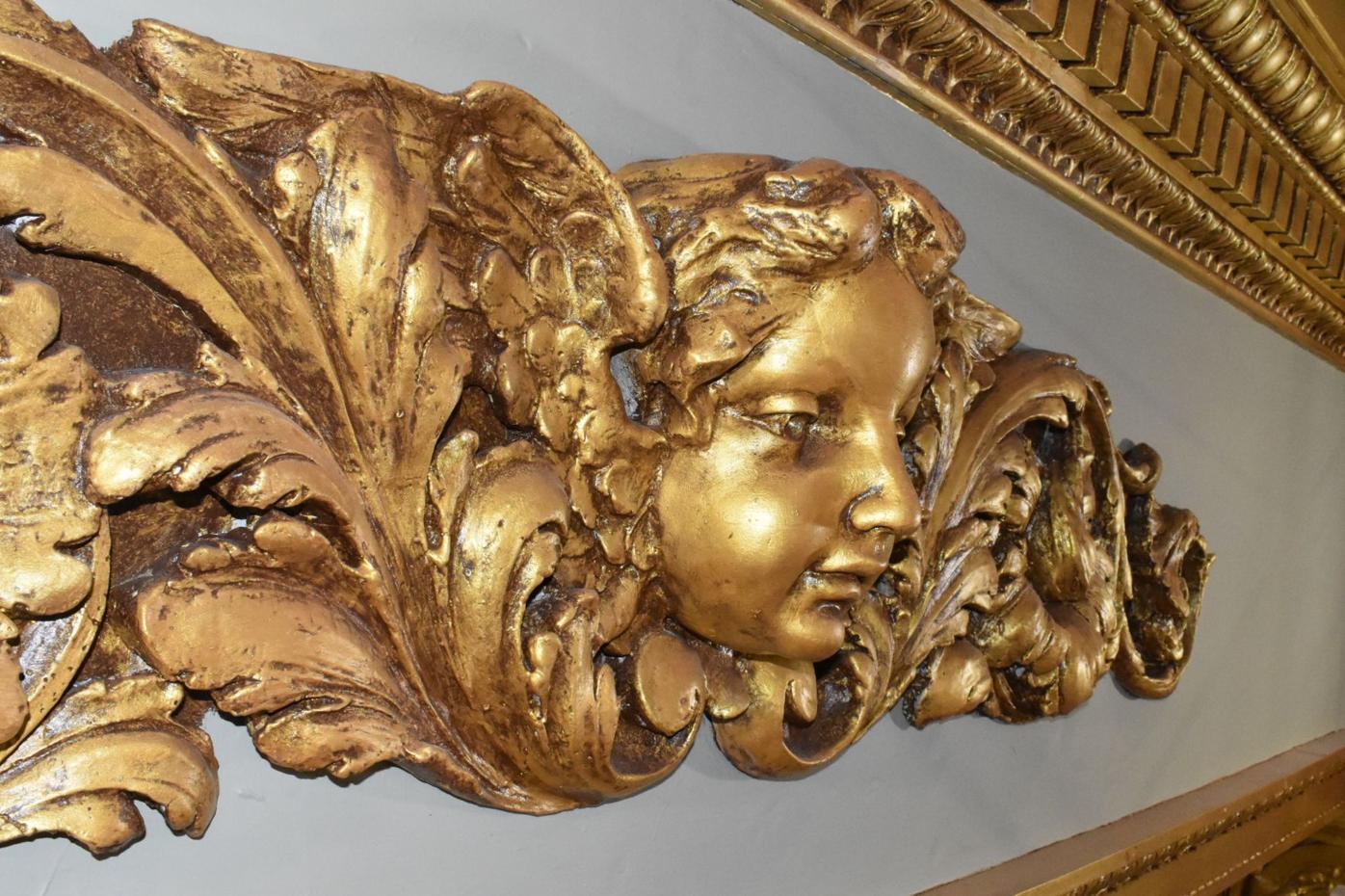 Plaster restoration experts with EverGreene Architectural Arts have completed their work on the balcony fronts at the Colonial, including this gilded cherub. 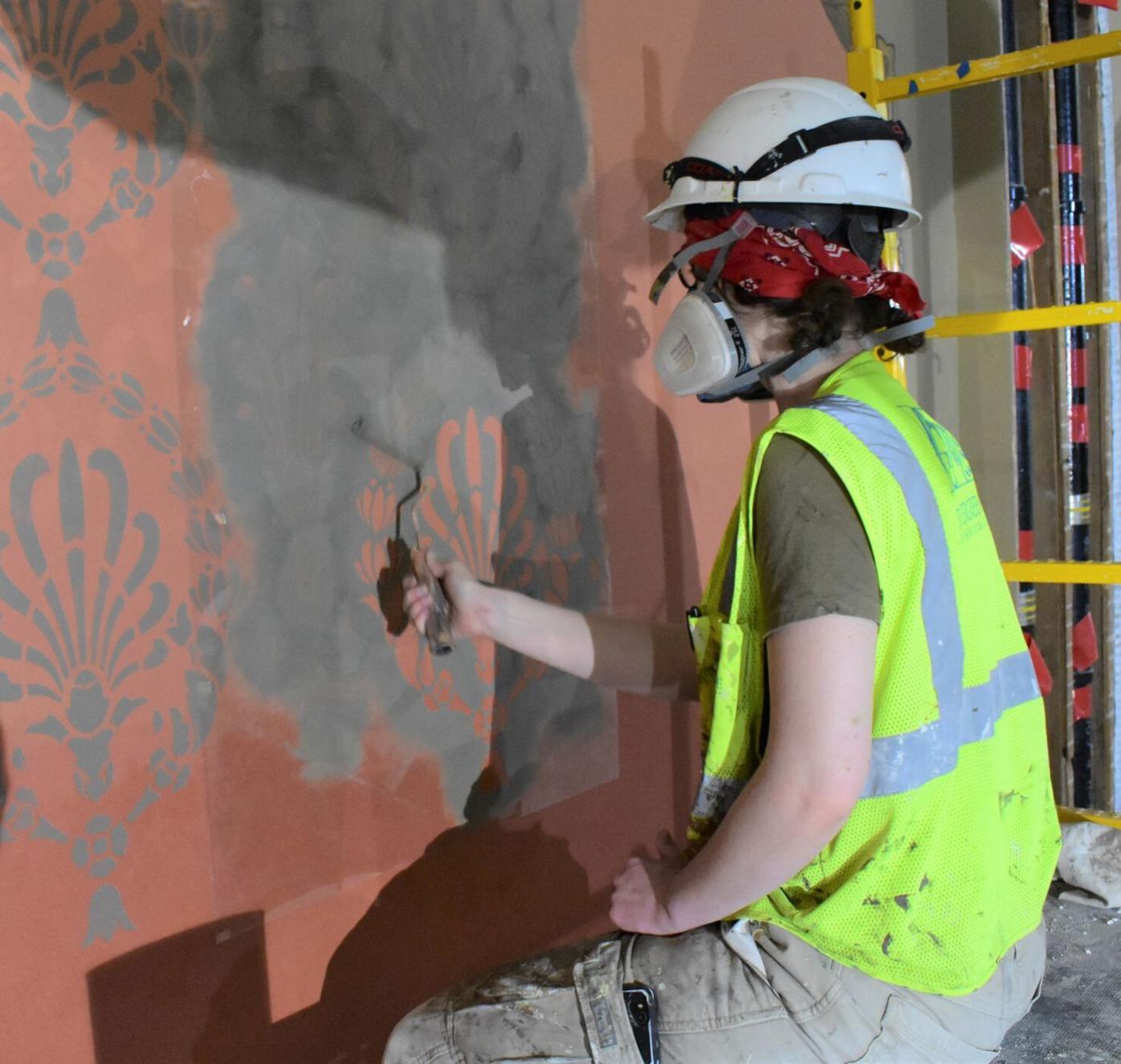 Annie Vaughn of EverGreene Architectural Arts of Brooklyn, N.Y., stencils a wall at the Colonial Theater in Laconia in May as part of its restoration into a 750-seat civic auditorium.

Jed Ellis paints the highlights of a border on the ceiling at the Colonial Theater in Laconia in May as part of its restoration into a 750-seat civic auditorium.

Annie Vaughn of EverGreene Architectural Arts of Brooklyn, N.Y., stencils a wall at the Colonial Theater in Laconia in May as part of its restoration into a 750-seat civic auditorium.

LACONIA — While construction projects elsewhere have ground to a halt, restoration work at the Colonial Theater has continued unabated.

Tim Burke, superintendent for general contractor Bonnette, Page & Stone, said because of the huge size of the building, tradesmen and craftsmen can continue their work in different areas easily maintaining social distancing. Although the coronavirus pandemic has slowed the arrival of some materials, Burke said, it has not stalled progress as there is always work to be done in some part of the Main Street building.

Work completed to date hints at the scope of the theatrical transformation once completed. The ceiling murals are slowly becoming bright and beautiful as art restorers remove decades of dulling dirt and carefully recreate damaged plaster.

The finishing touches are worth it, Burke said, as he showed the towering brick walls of the backstage area, pointing out that there is not a crack to be seen and that the mortar is as sturdy as the day it was laid in 1914.

But the passage of time challenges even the most well-crafted work to withstand the intrusion of the elements, changes of ownership and adaptive reuse. Burke concedes that had the repair of the roof been “more timely” some of the damage now being repaired wouldn’t have occurred.

In 1983, the theater was turned into a multiplex, with the balcony and orchestra sections divided into four separate screens, with a fifth in the former stage area. When a dividing wall was put up it bisected the sculpture of a muse playing a lyre with a strip of metal track. The plaster has been restored and the reconstruction completed.

The restoration is meant to help art stand the test of time by keeping time at bay, says Jed Ellis, of EverGreene Architectural Arts. The Brooklyn, N.Y.-based company that has an $800,000 contract for work on the theater has been pivotal in restoring one of Laconia’s landmarks to its proper glory using old-world techniques.

Cherubs, and the lyre-playing muse surrounded by an ethereal scarlet-colored flowing robe, will gaze back at the audience from high over the stage. Every square inch it seems, features some artistic touch. Ornate plaster decorations wrap the balconies and rim the massive stage. Golden-colored chandeliers with leaf-detailing hang overhead.

The so-called fantasy architecture was designed to help prolong the imaginary trance of the audience once the show was over and the lights came back on.

Many see the theater restoration project, which includes high-end apartments on the upper floors and multiple store-fronts on Canal and Main streets, as helping to make the downtown area a more appealing place to live and work, and the keystone for the long-hoped-for revitalization of the city’s core. The total cost of the Colonial restoration is expected to total $13.5 million.

According to Ellis, 75% of the painted detail in the Colonial remained and their job was to clean and conserve it, keeping as much of the original as possible. But in some areas a leaking roof had taken its toll and the original work had to be recreated.

Standing atop scaffolding, Ellis, who has worked for the company for 33 years, was busy painting a running leaf border with rosettes on the ceiling. The border was originally created with a stencil, but the shading on each of the leaves was hand-painted. Ellis is recreating them in the exact painstaking way.

The company is no stranger to theater restoration. After being abandoned and neglected for more than 35 years, EverGreene restored all the interior decoration in the 1929 Kings Theater in Brooklyn.

Work at the Colonial has also involved replication of missing and damaged ornamentation in addition to cleaning and conserving. Molds were made of the existing three-dimensional plaster details and then re-cast for the damaged space.

EverGreene’s work has ranged from restoration of cathedrals to the dome of the U.S. Capitol Building.