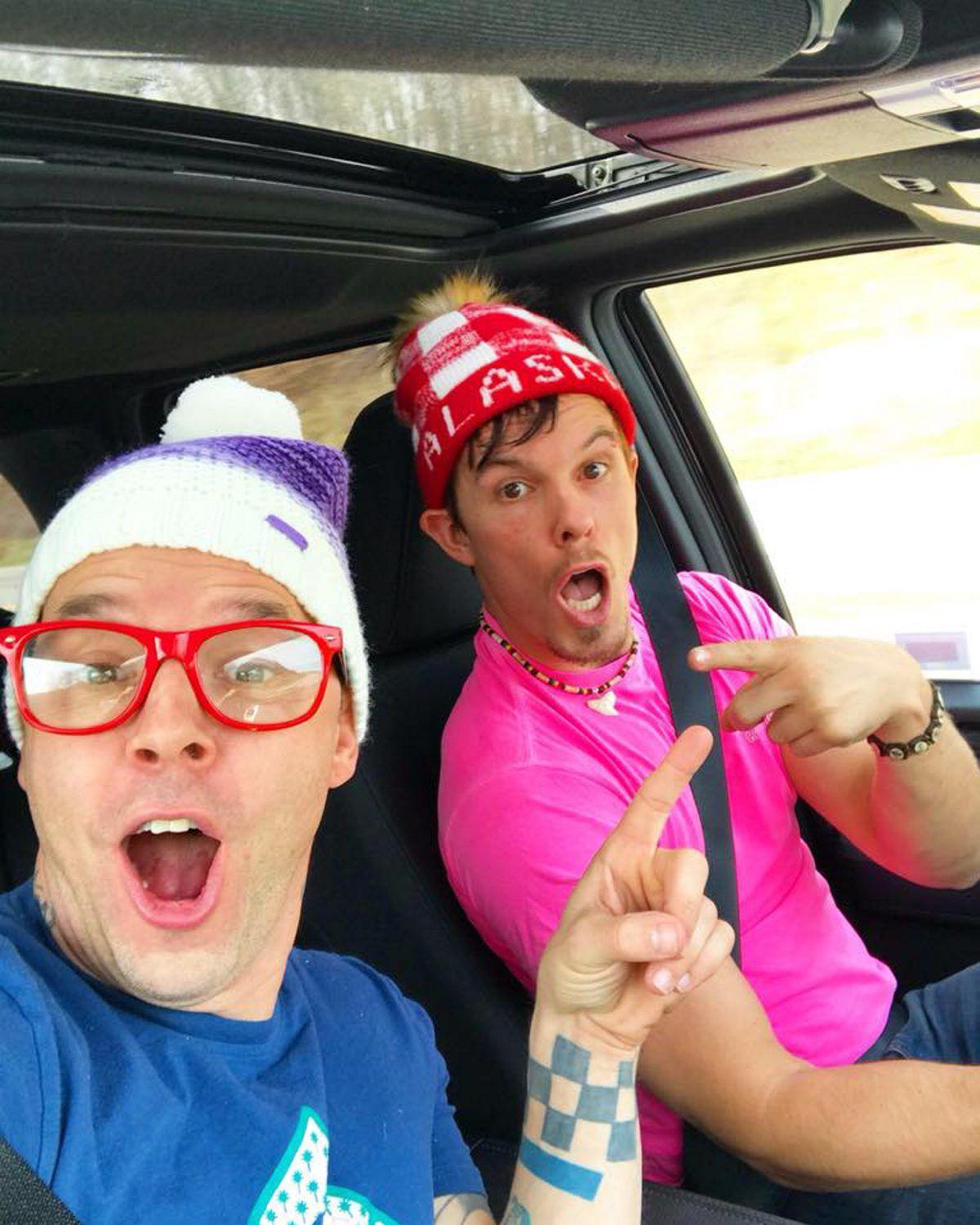 Around 3 p.m. Tuesday, a tired Justin Spencer and Ryan Vezina posted this message on Recycled Percussion's Facebook page: "Only 31 hours from setting an insane world record. #50in12" 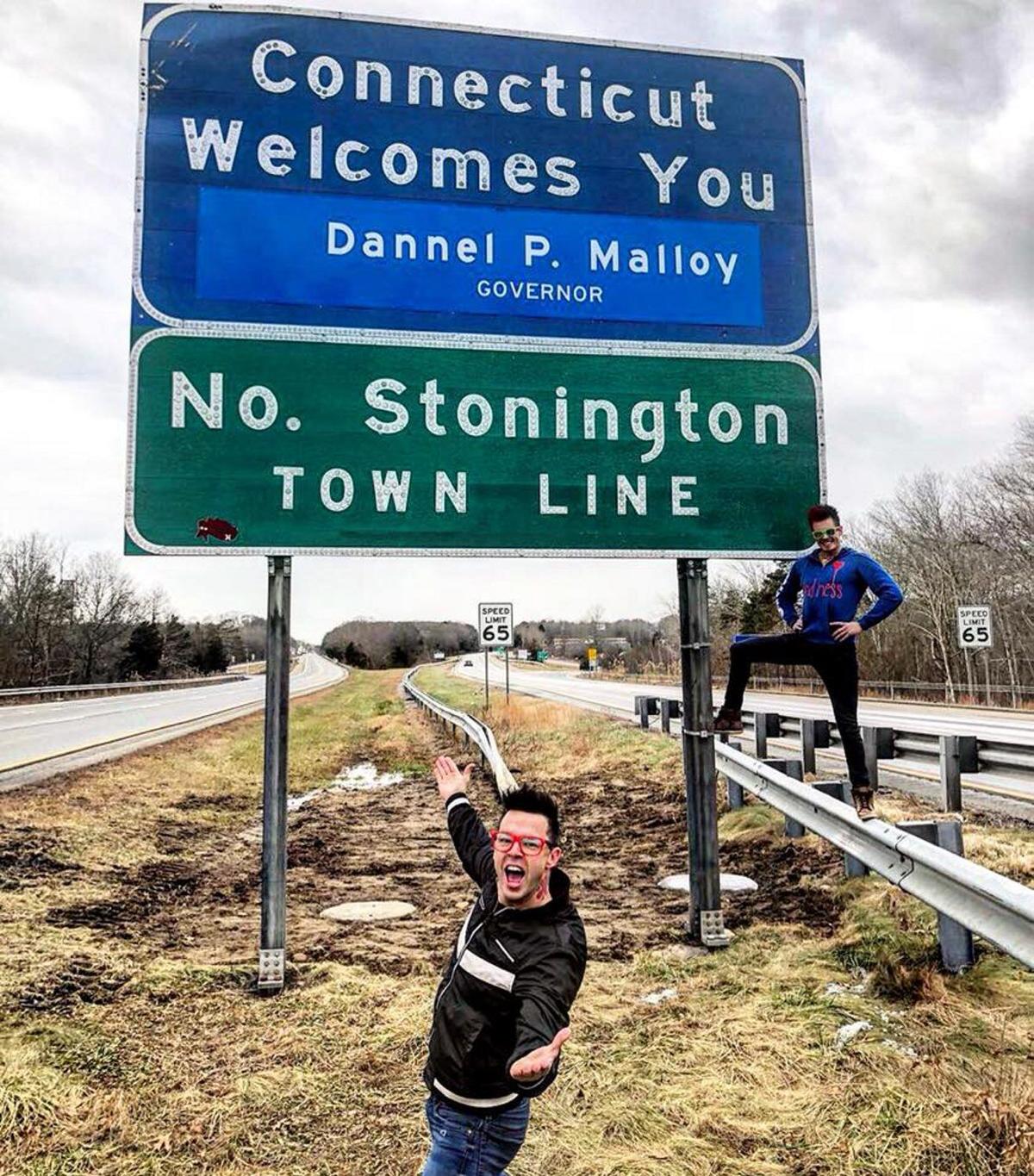 “Hello, New England! It's so nice to see you. We've missed you.” 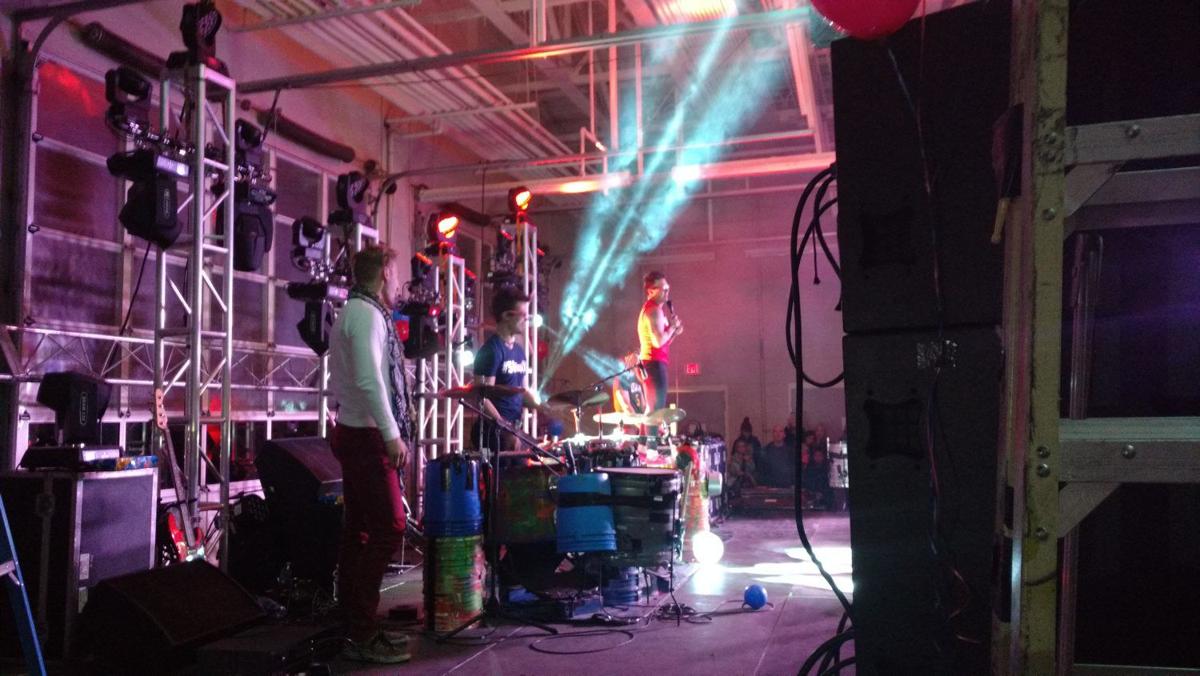 The group wrapped up their tour with a raucous show at the Manchester Fire Station at 280 E. Industrial Park Drive, an event that stayed a secret until a few hours before the show. 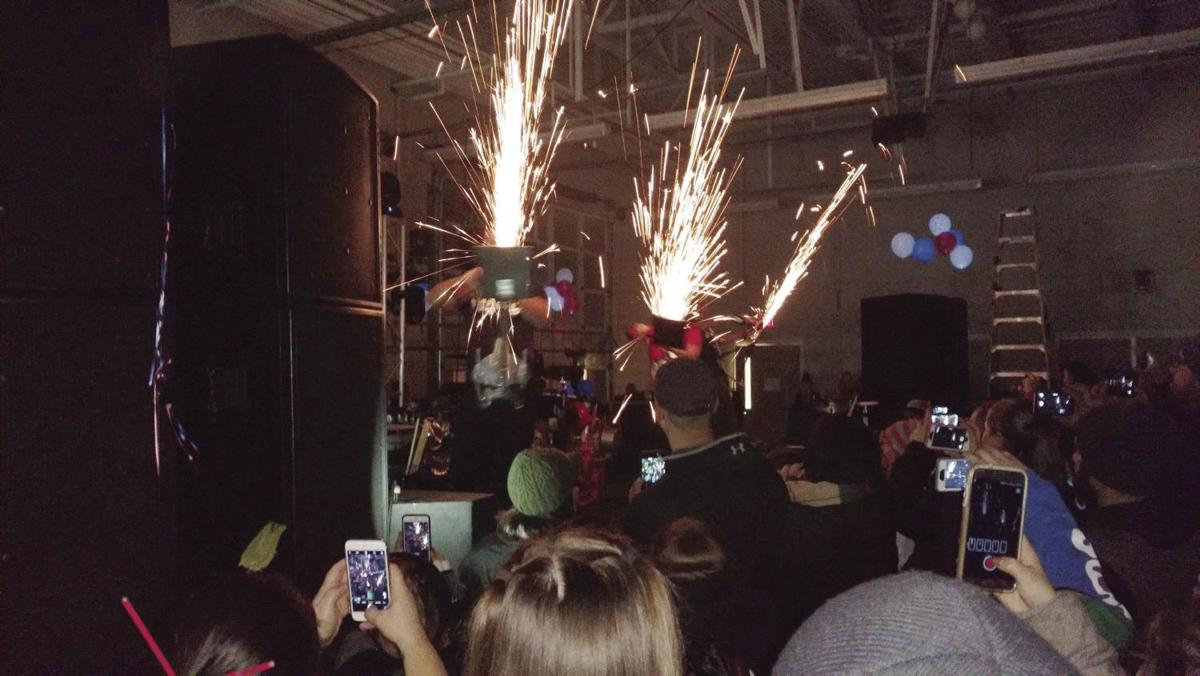 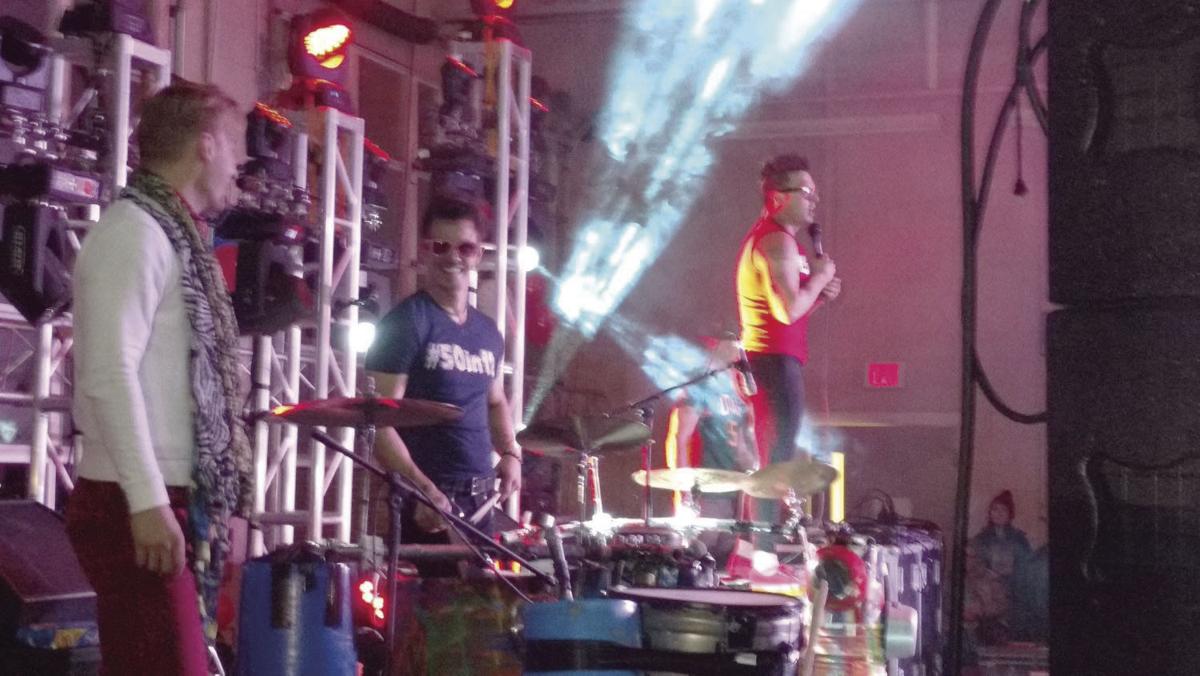 Around 3 p.m. Tuesday, a tired Justin Spencer and Ryan Vezina posted this message on Recycled Percussion's Facebook page: "Only 31 hours from setting an insane world record. #50in12"

“Hello, New England! It's so nice to see you. We've missed you.”

The group wrapped up their tour with a raucous show at the Manchester Fire Station at 280 E. Industrial Park Drive, an event that stayed a secret until a few hours before the show.

New Hampshire’s iconic, junk-rock band, Recycled Percussion, went into the Guinness Book of Records Wednesday night, completing 50 concerts in all 50 states in 12 days quicker than anyone else has ever done.

“It’s official No band has ever performed in all states of America faster than us. Bam!!” the group posted on Facebook just after 8:15 p.m.

The group wrapped it up with a raucous show at the Manchester Fire Station at 280 E. Industrial Park Drive, an event that stayed a secret until a few hours before the show.

NH Weekend spoke to the band prior to Wednesday's performance about the tour and their upcoming holiday shows around the state.

When NH Weekend caught up with Justin Spencer, leader of the Granite State junk-rock heroes of Recycled Percussion, the group was headed to Hawaii. But this was no vacation.

This holiday season the band had a twofold mission, to raise $50,000 for needy children in New Hampshire and break a Guinness world record in for performing 50 shows in 50 states in 12 days.

At press time Tuesday afternoon, Recycled Percussion was in the final stretch and posting this update: “It’s 3:07 a.m. We have completed 44 states with six very important ones left to go! When we wake up in a few hours, New England, it’s your turn. This is our final day to set the world record. 15,609 miles traveled. One final push.”

Recycled Percussion said it had hit the $45,000 mark in donations and hoped to do the last show of the whirlwind tour in New Hampshire by 7 p.m. Tuesday.

The ambitious goal mirrors the group’s ongoing efforts to raise money for communities in the Granite State through its Recycled Percussion Foundation.

Recycled Percussion played its first gig at a Goffstown talent show in 1995, wowed the masses on “America’s Got Talent” in 1995 and pursues “Chaos and Kindness” in a show on WMUR TV. It’s one of the first bands to popularize “junk rock”— music generated by industrial tools and construction items as complicated as drills and as raw as trash cans. And the audience is pulled into the act, playing sticks, buckets, drumsticks — the kitchen sink’s probably not far behind.

And there’s no rest for the weary. The group already had been slated to do a run of New Hampshire gigs from Dec. 26 through Jan. 6. But in the midst of his cross-country trek, Spencer talked with NH Weekend about breaking records, being an inspiration to New Hampshire youth, and the need to go outside of his comfort zone.

So, you’re going to Hawaii?

Spencer: For a few minutes, yeah.

Yeah, like two hours. Then I go to Alaska three hours after. We’re breaking a world record right now for the fastest any band’s ever played a show in every state. So we start tomorrow in Hawaii, that’s our first state. We end up in New Hampshire for our 50th, so we have 12 days to play every state in America.

It sounds like you’re not cutting yourselves any slack. If the record now is 50 days, you could have done it, for example, in 49 days, right?

Yeah, but the goal is to set a record that can’t be broken. Our goal is to raise enough money to buy toys for 5,000 kids on Christmas Day for New Hampshire, so that’s how we’re doing it. Sixteen thousand miles of traveling over 12 days, plus 50 shows.

Jet lag’s the least of my concerns.

Weather is always a big one. Exhaustion. Twelve days of no sleep, basically, and that’s tough. We’re gonna have to drive 800 miles every day and play five shows a day.”

Have you broken other records?

I’ve broken two records — this is my third, but we broke a world record earlier this year. We performed 43 shows in one day.

What drives you to do this?

It’s kind of addicting, the idea of challenging yourself. I’ve always been a big believer that life needs purpose.

We need something to do, and without goals and without challenges we kind of wave the white flag on our ambitions. So whenever I get bored I’m like, ‘I need to do something.’ Something that I think that pushes yourself to see if you’re capable of doing it.

I think that doing those kind of things inspires others to try something, (so) that they feel comfortable getting out of their comfort zone.

Do you feel out of your comfort zone right now?

I am not in my comfort zone, no.

The band did a free pop-up show at a Manchester Home Depot last year. Do you still do a lot of those?

That was just for fun. That was a random thing that we do. All of our 22 shows in New Hampshire — they’ll all sell out for sure, they always do.

We always pack the place. But once in a while we’ll give back to the fans, and we’ll just do a show with one day’s notice.

You also give back by speaking at local high schools about your success story.

I always have a good time speaking to high schools and inspiring the next generation. (I) tell my story and where I come from and how I got to where I (am) and my success. I think it’s a thing that the kids in the schools always appreciate.

They had just had a tragic loss at the school, and I went there to try to boost morale.

Yes , their classmate had just been killed in a car accident. It must have been tough for you to speak with these kids.

I think that every school has its trials and tribulations, and so do the students. There are never any magic words that can heal the loss of somebody or a loved one or a friend in your school.

But to show that we care, that humanity’s there, it becomes a school to support, and that’s always an effective way to get morale back in the right direction.

Recycled Percussion has done 3,000 shows in its Vegas residency over the last eight years. What’s your favorite thing about performing in Vegas?

The ability to challenge ourselves as performers, because you’re performing with the best shows in the world.

At these upcoming shows in New Hampshire, what will people see? Can you describe it?

A super funny show — a big, big production (with) a bunch of surprises. It’s a big deal.

Can you elaborate on these surprises?

When you first started Recycled Percussion, how did your friends react?

I don’t think that we had any ambitions to be as famous as we are or as successful. I mean, we built a multimillion dollar brand, and we make millions and millions of dollars performing. We set out just to play some shows, and we put a lot of work into it. It’s taken us 22 years to get to where we are. It’s been a long road. So it’s not like it was an overnight success.

We’ve always had a lot of support from people in New Hampshire, our friends and family for sure.

Is there anything you would have done differently?

I would change the name of the band. I think we have a bad name.

Really? Why do you think it’s bad?

I think it’s boring. It’s long. I probably would have named us the Beatles. (Maybe) people would have supported us more (laughs).