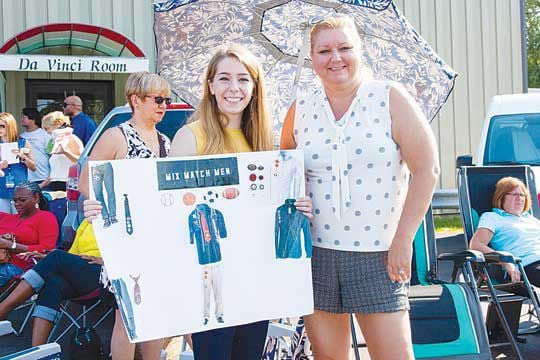 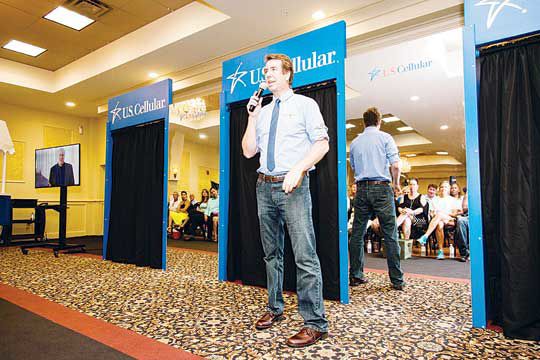 Scott Salyers, supervising casting producer for ABC's "Shark Tank," addresses the first wave of entrepreneurs at Tuesday's casting call. Behind him are practice booths with mirrors and a one-minute timer for practicing their pitch.

Scott Salyers, supervising casting producer for ABC's "Shark Tank," addresses the first wave of entrepreneurs at Tuesday's casting call. Behind him are practice booths with mirrors and a one-minute timer for practicing their pitch.

Inspired by her husband, Pamela Riesenberg wants to put an end to men who can’t match their shirt, pants, shoes and tie. The Derry woman fashioned an idea of putting sports-themed tags on clothes, so men can choose matching tags to coordinate their look.

“You could pick out an outfit in five minutes,” said Riesenberg, who buys clothes for her husband, Jayson.

On Wednesday, she had 60 seconds to pitch her business idea at a casting call for ABC-TV’s “Shark Tank” in Portland, Maine.

She joined about 800 other people pitching 350 products from all over the country seeking national attention and a cash infusion from business people dubbed “sharks” who decide whether to invest in new businesses and their products.

“We don’t worry about if it makes good TV,” said Scott Salyers, the show’s supervising casting producer. “This is the sharks’ real money. People don’t understand that. This is an entrepreneur’s livelihood. That is drama enough.”

The show gets 40,000 submissions a year. People will find out next week whether they make the next cut to 400. People from about 150 businesses will eventually get on the show. Some could be on an episode that airs as early as this fall.

“It kind of feels like a lottery, but if you have a good idea and a good pitch, I think it’s all about your energy and passion,” said Riesenberg, who was offering a 10 percent stake in her Derry company, Mix•Match•Men, for a $100,000 investment.

Manchester jeweler David Bellman had his 20-something son, Alex, camped overnight in a folding chair in a parking lot to save a spot in line. They met people from Canada, Florida and Virginia.

“They came from everywhere,” David Bellman said. A few days earlier, “I was in New York City in a cab and saw an ad from this event.”

Bellman invented a product that allows jewelry to be washed in the dishwasher alongside cups and plates.

His latest improved version has sold close to $100,000 in retail sales, but he is looking for a bigger payoff. Bellman said he is offering 20 percent of his company for a $250,000 investment.

“We actually get our goat milk from a New Hampshire farm,” said Hoyt, who wanted to keep the farm’s location a secret for now.

The Hoyts have been selling the soap for about six years.

“We can’t meet the demand, so what we need is some financial backing to get equipment, to securing a larger space as well as employees,” she said.

Salyers said the Maine casting call, hosted by U.S. Cellular, was the last in a series of events around the country.

He said more episodes are taped than will air, contestants are fully investigated to make sure they are telling the truth about their companies, and that the “sharks” aren’t in on the selection process.

“The sharks know nothing of these companies until they walk down that hallway,” he said.