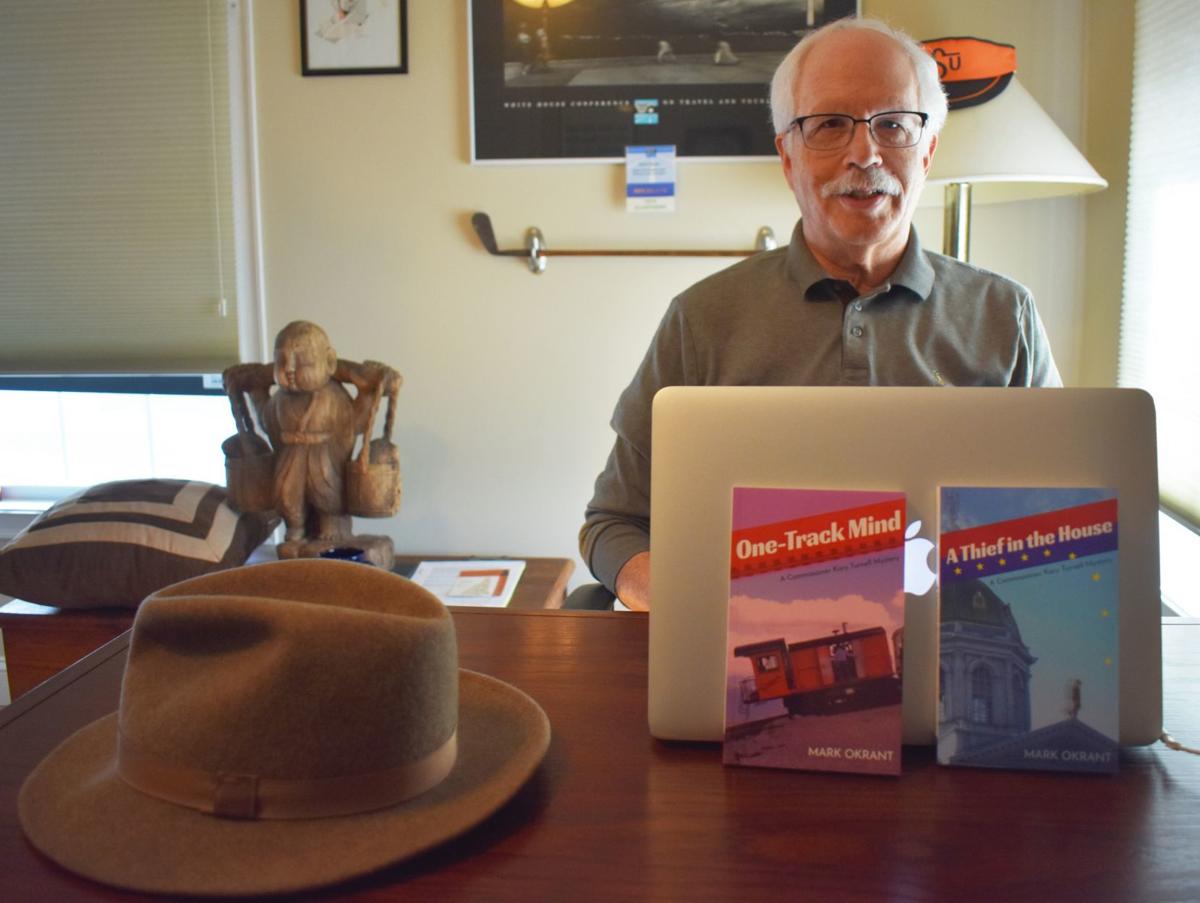 With his lead character’s trademark fedora resting on his desk, Mark Okrant, author of books about crime-solving Commissioner Kary Turnell, talks at his Loudon home about Turnell’s newest exploits. 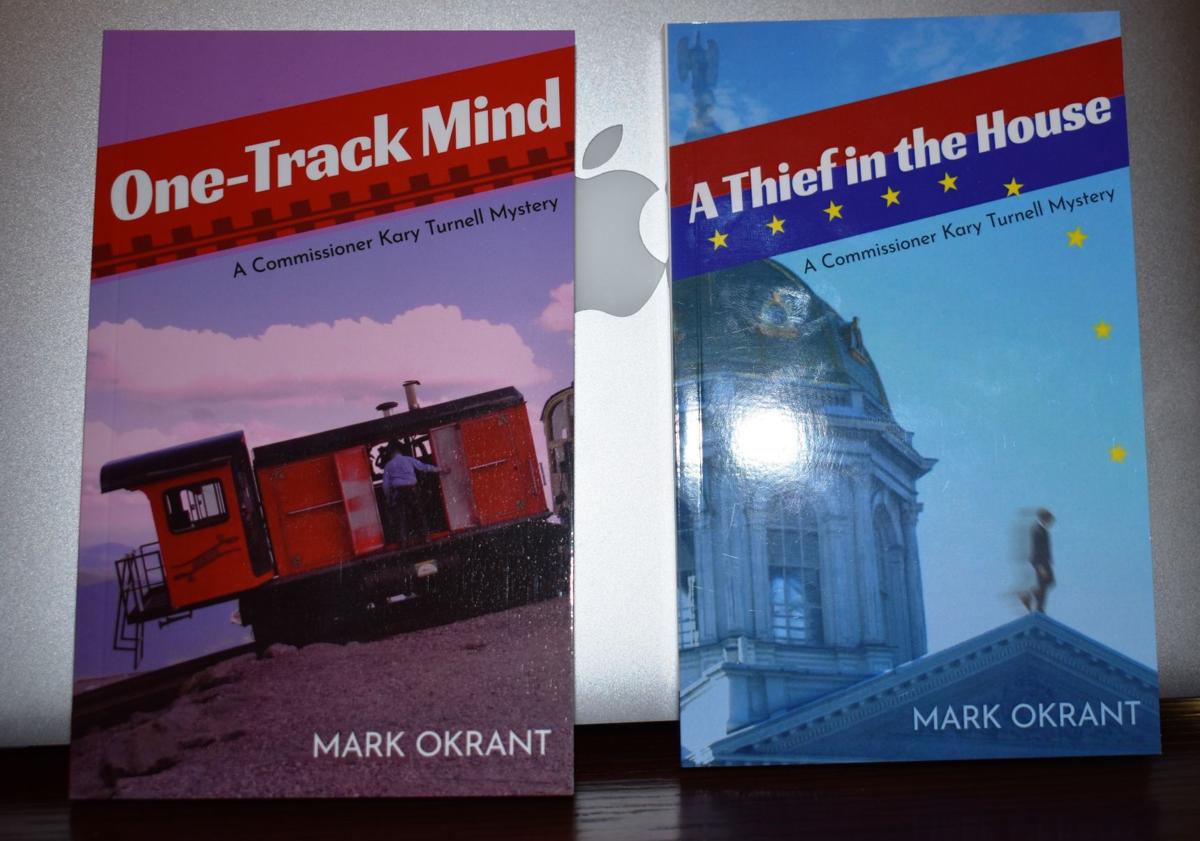 “One Track Mind,” which has Commissioner Kary Turnell investigating a murder on the Mount Washington Cog Railway, and “A Thief in the House” are two completed novellas in Loudon author Mark Okrant’s six-novella series set in New Hampshire and featuring the sleuthing Turnell.

LOUDON — Kary Turnell, the peripatetic, crime-solving “man in the fedora,” is poised for a big year in 2020. The detective has been penned into cases throughout New Hampshire, including Concord, Wolfeboro, Manchester and the Seacoast and Monadnock regions, too.

Turnell is the creation of Mark Okrant, who in 1979 at the then-Plymouth State College created the first academic tourism program in the Granite State. Before and since his retirement in January 2016, Okrant has combined his love of writing, tourism and New Hampshire in murder mysteries.

Most recently, Okrant has embarked on a series of six novellas, issued by Concord-based Plaidswede Publishing. The series began late last year with “One Track Mind,” which had Turnell investigating a murder on the Mount Washington Cog Railway.

Last month, Okrant released “A Thief in the House,” which has Turnell pursuing the bad guys at the Beaver Meadow Golf Course, State House and McAuliffe-Shepard Discovery Center.

On or about April 1, Okrant expects to release “Long Walk, Short Deck,” most of which takes place aboard the MS Mount Washington excursion ship that plies Lake Winnipesaukee.

“I decided to write this series for two reasons,” Okrant said during an interview at his home. The first is to give Kary Turnell fans “more to read about their favorite investigator,” while, more broadly, the second is to offer visitors and residents alike “a chance to acquaint or reacquaint themselves with some of New Hampshire’s favorite places.”

Although born and raised in New London, Conn., Okrant is a self-acknowledged New Hampshire homer who believes there is nothing better than living in the Granite State, other than the occasional murder that can be solved only by a clever academic, turned sleuth, not entirely unlike himself.

A member of the New London High School Class of 1965, Okrant enlisted in the Army National Guard after graduation and later attended Southern Connecticut State University in New Haven where he earned both his bachelor’s and master’s degrees in geography.

He headed west to Oklahoma State University, where he earned a doctorate degree in geography. He taught at South Dakota State for three years, also working briefly as a data analyst for the Hamden, Conn., Police Department before being hired at Plymouth State.

There, Okrant used the scientific method to identify and quantify the importance of tourism to New Hampshire and made recommendations on how best to attract visitors. He conducted research for 26 years, including 20 for the state’s Joint Promotional Program.

Gratitude for being welcomed into the nascent field of New Hampshire tourism by its first leaders was the inspiration for his creative output celebrating the state, Okrant said.

His past works have been set at grand hotels, including The Balsams in Dixville; the Mountain View Grand in Whitefield; the Omni Mount Washington in Bretton Woods; and, in 2015’s “Whacked,” at Wentworth by the Sea in New Castle.

After those adventures, Turnell “left New Hampshire for a while, but now he’s back,” Okrant said.

Modern tourism, Okrant said, is about “storytelling,” fostering an emotional response that brings a place “to life” in the minds of potential visitors.

Okrant’s writing, he said, “puts a face, in this case Kary Turnell’s, on a place and destination.”

Okrant thinks he can complete the Turnell novella series by the end of the year. Although unsure of what he might write next, he knows that writing will always be a part of his life.

“This isn’t about money,” he said, “It’s an opportunity to give back to an industry — New Hampshire tourism — that I dearly love.”