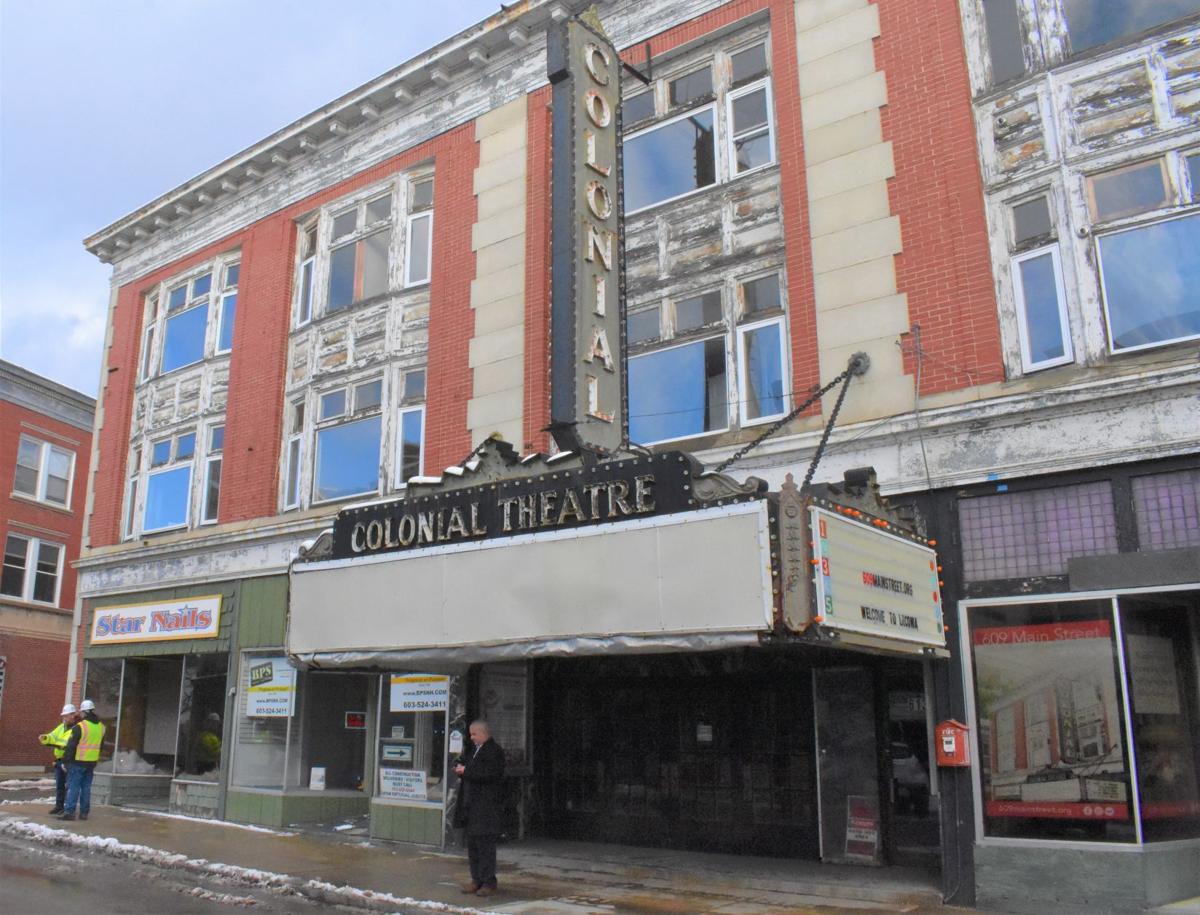 Laconia’s Colonial Theatre opened in 1914 and transitioned over the years from offering vaudeville performances with a live orchestra to being cut up into a five-screen multiplex cinema in 1983. It hosted the world premiere of “Return to Peyton Place.” A restoration project has begun on the 105-year-old theater. 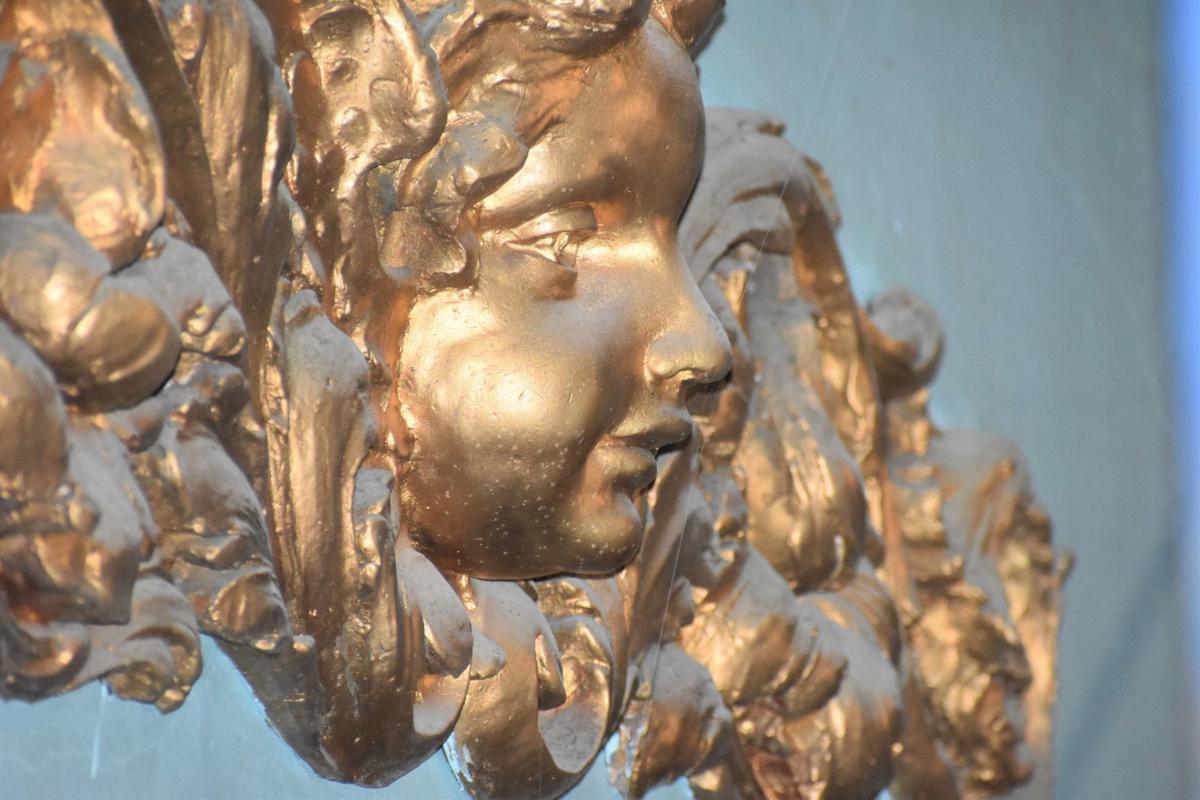 The gilded face of a cherub decorates a balcony front in Laconia’s Colonial Theatre. 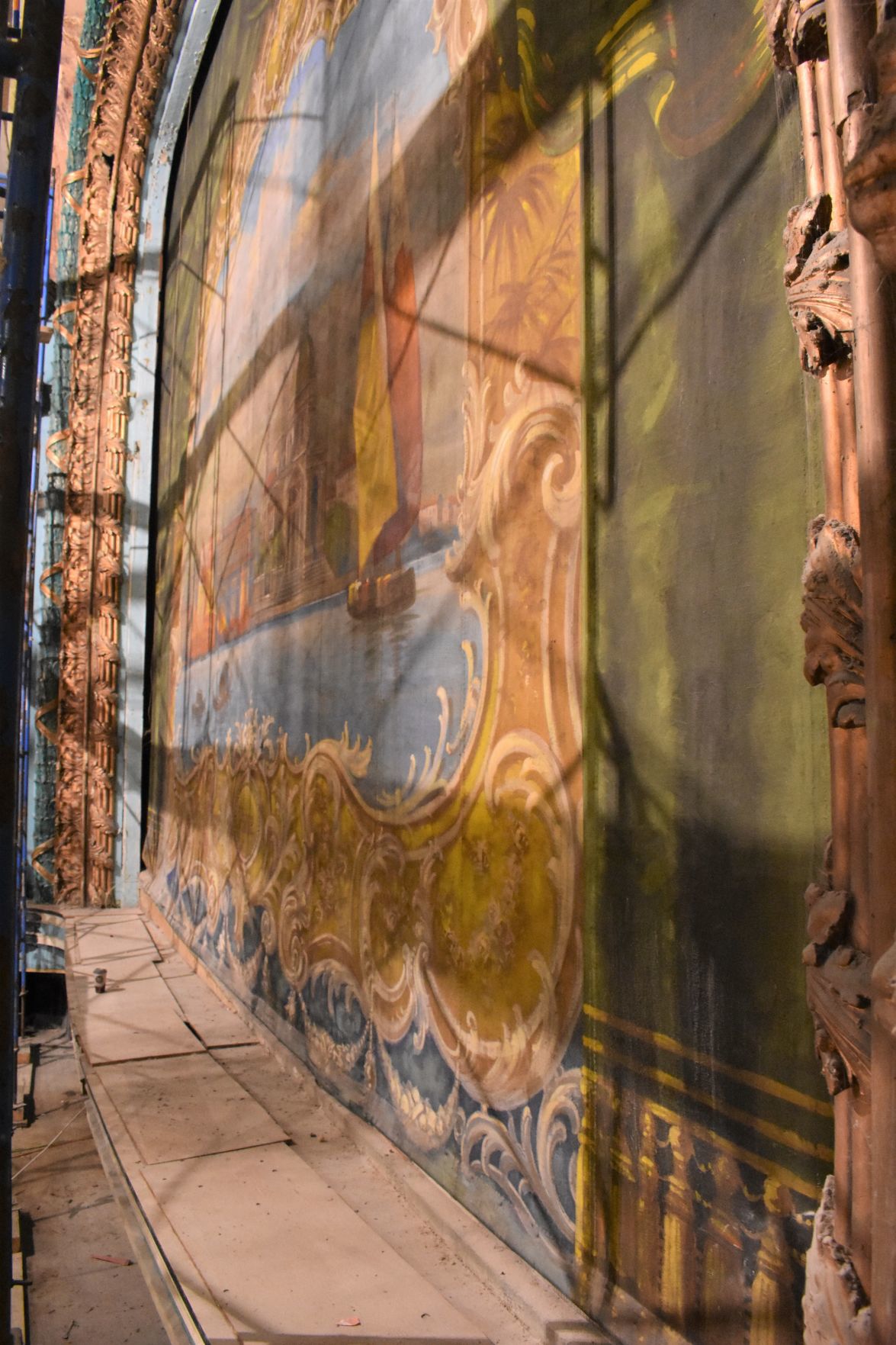 The grand, hand-painted vaudeville curtain considered an irreplaceable artifact remained rolled above the stage hidden from view until it was rediscovered in 2018. 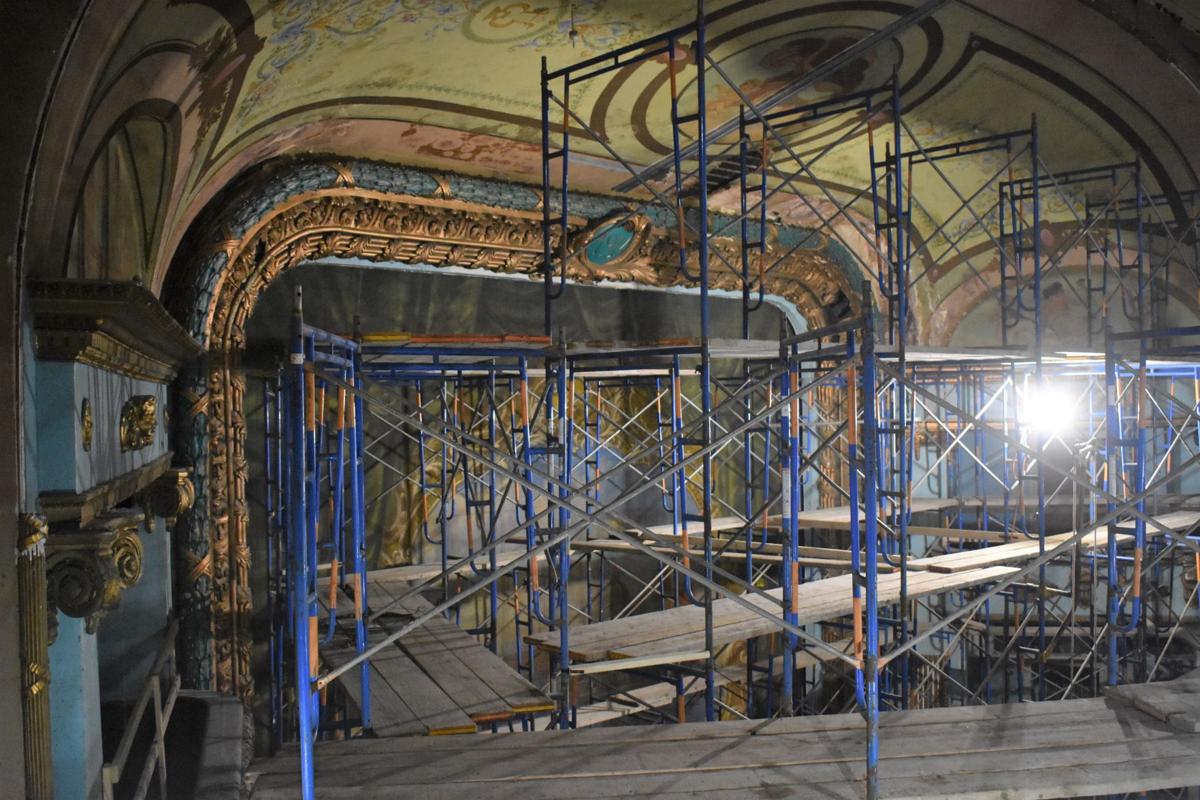 Scaffolding stretches from floor to arched ceiling as the restoration of Laconia’s 105-year-old Colonial Theatre is underway. 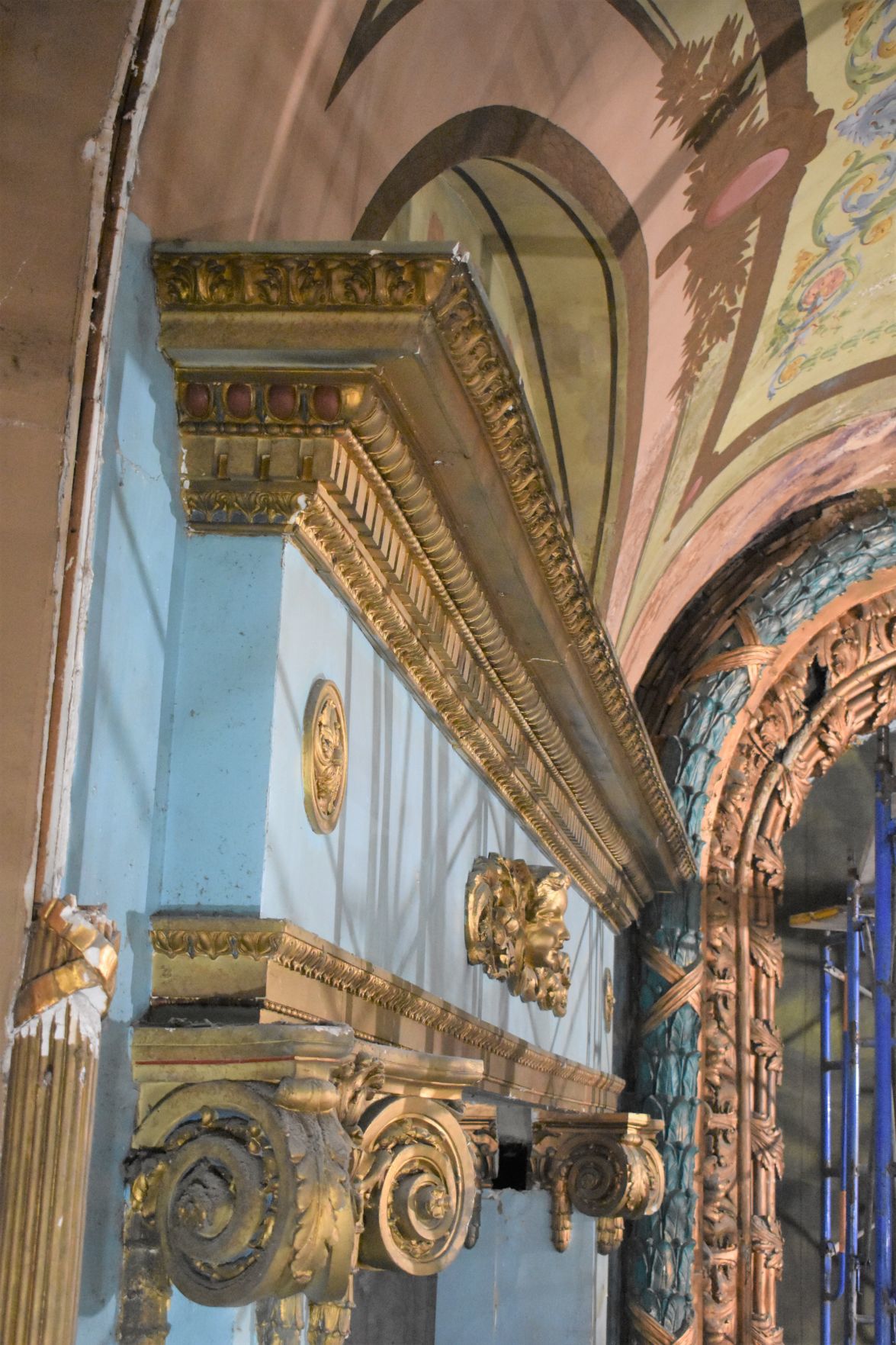 The restoration of Laconia’s 105-year-old Colonial Theatre is underway, including the arched ceiling and plaster detail.

LACONIA — One of the largest historic preservation projects in state history is finally out of the starting gate and on track to be completed late next fall, city officials have announced.

“It finally came together,” said Justin Slattery, executive director of the Belknap Economic Development Council, which helped spearhead the assembly of a multi-million dollar financial package to restore the 105-year-old Colonial Theatre on Main Street in Laconia.

The restoration of the historic and cultural gem — intended to breathe new life into the city’s downtown — was originally slated to begin on Jan. 1, 2017, but the project’s start was repeatedly beset by financing delays.

Hints of the original grandeur of the theater are still evident. In the entryway, flush mounted columns of marble veined with light and dark swirls flank the ornately carved trim of the curved ticket windows. A small chandelier hangs overhead dripping in lead crystal prisms. Further up, mahogany French doors with brass push bars open into the main theater and its huge high-ceiling stage.

During a recent visit, construction lights that ring a warren of staging stretching from the floor to the vaulted ceiling partially illuminatee a golden life-sized cherub face on a balcony front. The original was likely hand-carved in wood. Italian craftsmen using gypsum, water and hemp created plaster casts that were then gilded. Similar castings in an elaborate Corinthian style top multiple columns that grace the theater.

Slattery says each time he visits the building more of the remains of the five-screen multiplex cinema that came into being in 1983 have been stripped away.

“There has been a lot of demolition work that has really helped uncover some of the many historic elements,” he said.

“It’s been a real team effort by the city and so many partners and is really great to get to this point.”

Mayor Ed Engler’s announcment that the financial closing between the city and the Belknap EDC during a Dec. 9 city council meeting was met with cheers and applause.

“This is a monumental day for those of us who have been involved with this project on almost a day to day basis for just short of five years. It took far longer than we ever realized to get to this point,” said Engler.

The project is comprised of three separate mixed-use developments within the 51,00-square-foot brick building — the renovation of the theater, plus four storefront units and on the second and third floor apartments or condominiums.

Rusty McLear and his wife, Jodie Herbert, who helped neighboring Meredith become a tourism hot spot with the development of the lakeside inns and Mill Falls Marketplace, have signed on to construct at least eight residential units, representing private investment of more than $1 million, a move that helped push the city’s financial commitment to the project to $8.1 million.

Private donations and pledges have raised $1.7 million. Other major components of the funding stack include $500,000 from the Land and Community Heritage Investment Program (LCHIP); $2,192,000 in Historic Preservation Tax Credits; $1.15 million from the Community Development Finance Authority; and $650,000 in various grants.

The city council has committed Laconia to buying the 609 Main St. property at the end of seven years by forgiving the construction loan. The city will be the master tenant of the theater and manage its operations, Engler said.