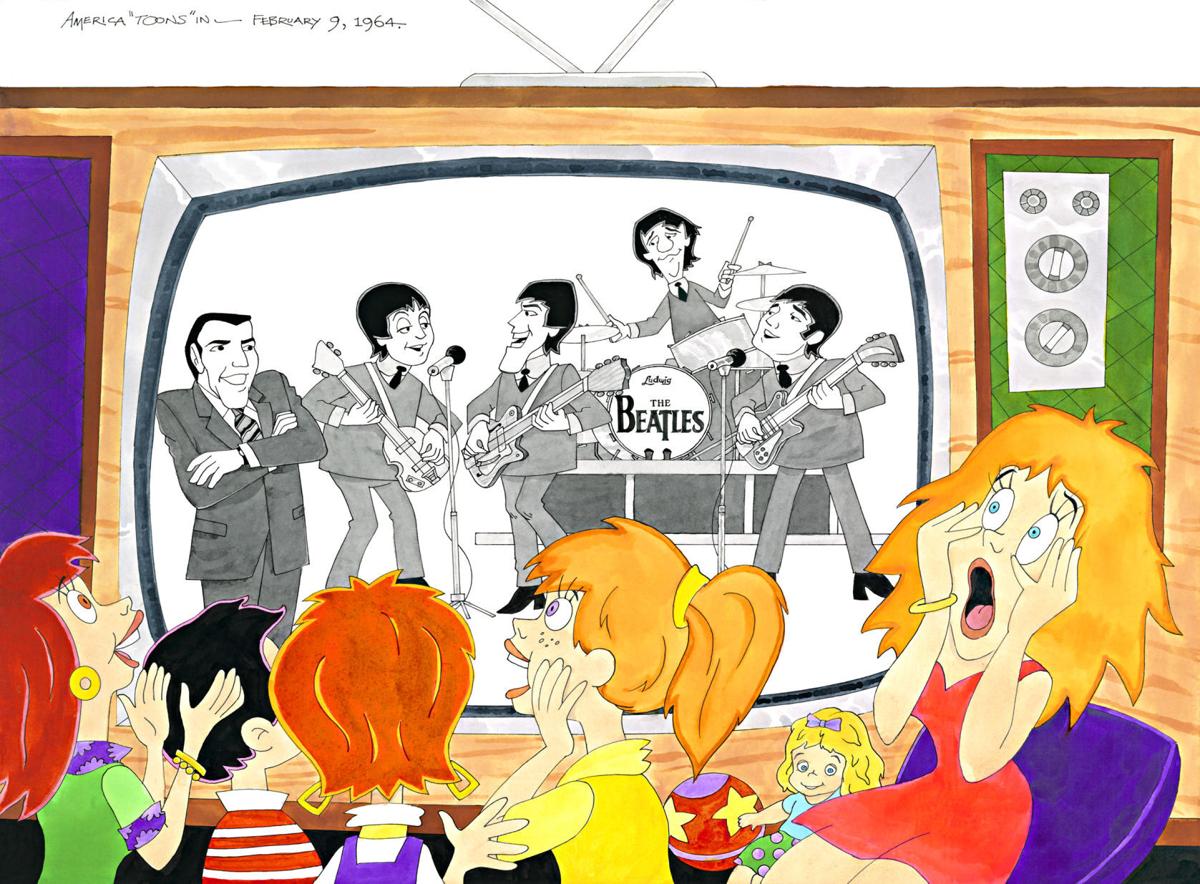 Ron Campbell captures the frenzied spirit of Beatlemania with this cartoon image of screaming teens watching The Beatles’ 1964 television performance on “The Ed Sullivan Show.” 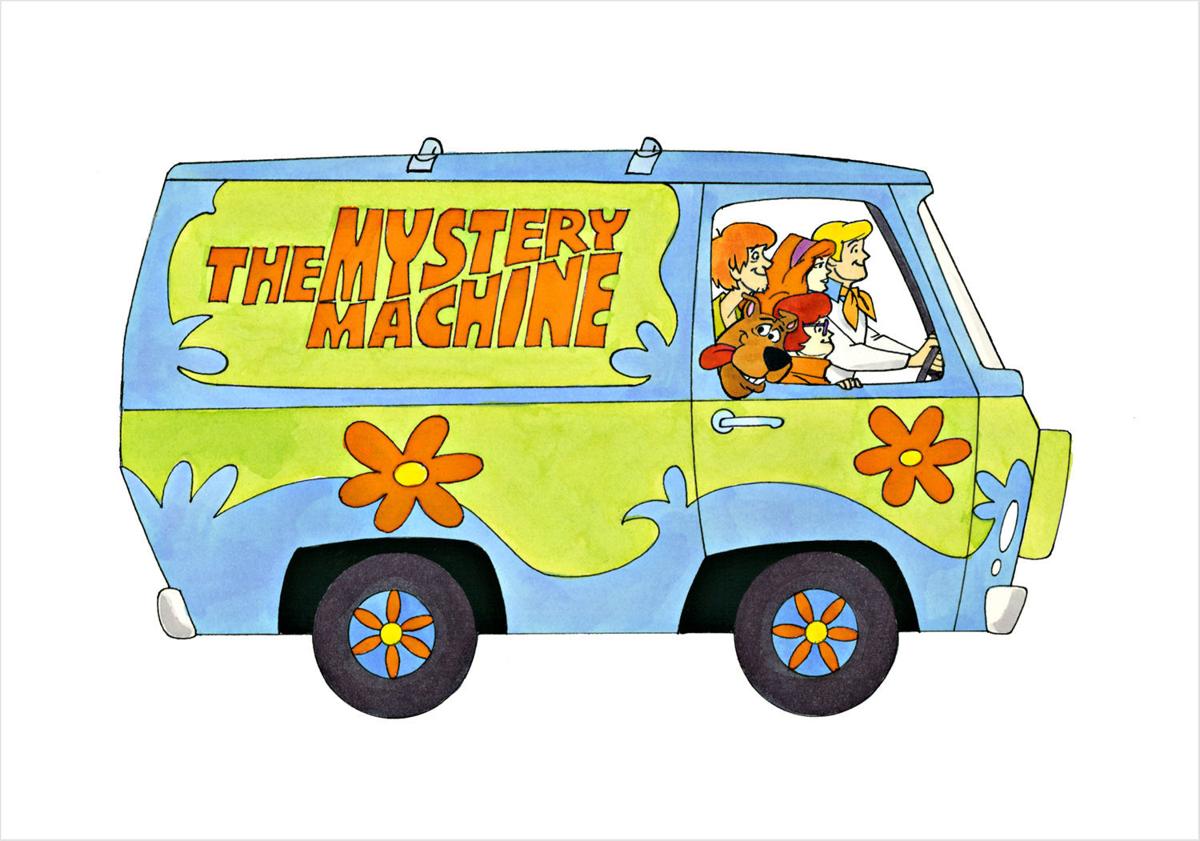 Scooby Doo and his human companions Shaggy, Fred, Velma and Daphne take clue hunting on the road in The Mystery Machine.

Even animator Ron Campbell’s signature on his celebrated cartoon pop art is a kaleidoscope of colors. 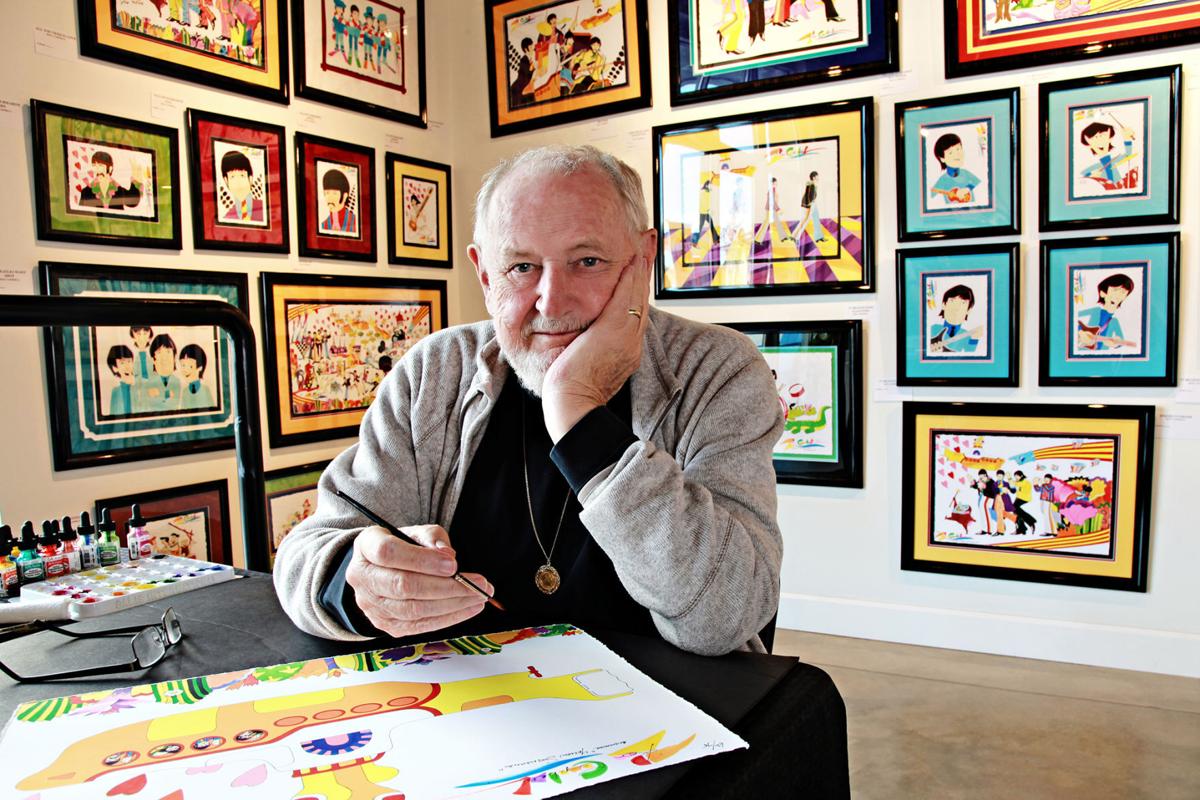 Ron Campbell has turned a 50-year career of classic cartoon animation, including the Beatles movie “Yellow Submarine” and the Saturday morning TV cartoon about the Fab Four, into a pop-art tour across the United States and beyond. 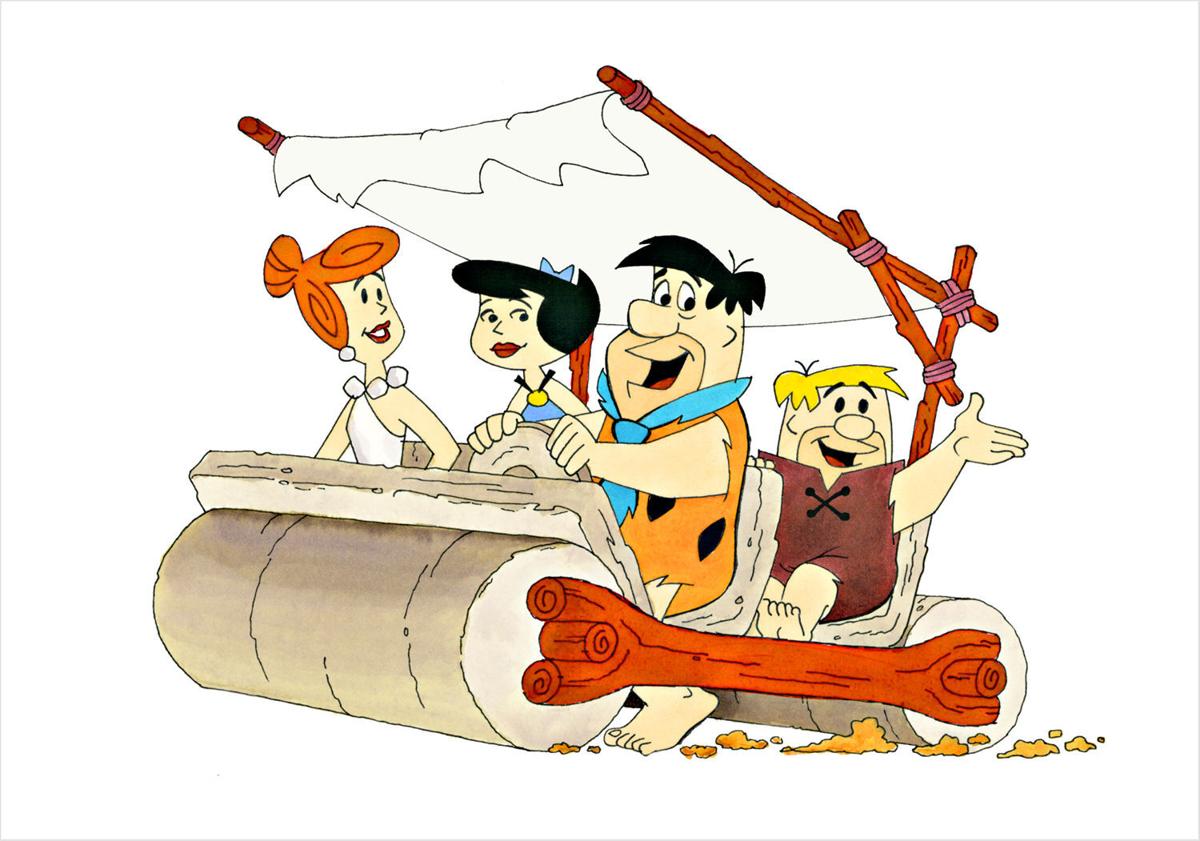 Arizona animator Ron Campbell helped give the Stone Age some color in this Hanna-Barbera cartoon classic, in which Wilma and Fred Flintstone share a foot-powered ride with neighbors Betty and Barney Rubble.

Ron Campbell captures the frenzied spirit of Beatlemania with this cartoon image of screaming teens watching The Beatles’ 1964 television performance on “The Ed Sullivan Show.”

Scooby Doo and his human companions Shaggy, Fred, Velma and Daphne take clue hunting on the road in The Mystery Machine.

Even animator Ron Campbell’s signature on his celebrated cartoon pop art is a kaleidoscope of colors.

Ron Campbell has turned a 50-year career of classic cartoon animation, including the Beatles movie “Yellow Submarine” and the Saturday morning TV cartoon about the Fab Four, into a pop-art tour across the United States and beyond.

Arizona animator Ron Campbell helped give the Stone Age some color in this Hanna-Barbera cartoon classic, in which Wilma and Fred Flintstone share a foot-powered ride with neighbors Betty and Barney Rubble.

R on Campbell is as colorful as all the cartoon characters he’s brought to life over the past 50 or so years.

Listen to the tempo of his storytelling — the stream of thoughts, the pauses to let tidbits sink in and then that mischievous laughter — and you’ll find he’s used to drawing people into the funny — and sometimes irascible — side of life.

Campbell, 80, in a recent chat from his Arizona home, is sharing thoughts about seminal work on both the Beatles’ television cartoon series and “Yellow Submarine” movie, and contributing to a Yogi Bear-sized picnic basket of children’s television classics, including “The Smurfs,” “Rugrats,” “Winnie the Pooh,” “Flintstones,” “Jetsons” and “Scooby Doo, Where Are You!”

While he doesn’t have favorites, Campbell does say he enjoyed illustrating Scooby Doo, the lovable clue-sniffing Great Dane, and Brainy Smith, a Smurf with a know-it-all sensibility that tends to backfire.

Then, without missing a beat, Campbell serves up an unexpected quip about another character.

“I especially like Angelica in the ‘Rugrats’ because she was such a nasty little …,” says Campbell, before laughingly rephrasing the end of his response. “She was a mean little girl. She was so cute. Such a typical 6-year-old.”

In his retirement, Campbell has transformed his cartoon career into a road trip of pop-up art shows and meet-and-greets with fans of all ages. He’s headed back to New Hampshire to show, sell and talk about his art Dec. 4-6 at Creative Framing Solutions, 89 Hanover St., Manchester.

But don’t expect patrons to gaze solemnly at his art with a cerebral air of contemplation.

“That’s why these art shows are so special. They’re not like serious art shows. It’s not expressionism, it’s not post-modern painting, it’s not unmade beds (in a contemporary installation about life), it’s not paintings done on the stand. It’s not real art,” he says, drawing out the words as if letting everyone in on the secret. “It’s cartoon pop art. It’s fun. It’s trivial art but it’s fun. It may be beautiful to some people, but it’s not Picasso.”

But that sardonic sense of self belies Campbell’s contribution to an art form that helped redefine Saturday mornings for kids beginning in the 1960s – and still gives fervent Fab Four fans something quirky to hang on their walls.

Though Campbell would later move to the United States and become a citizen in the early 1970s, he was born in Seymour, Australia, in 1939.

“In those days, there was no TV. So we all went to the movies on a Saturday afternoon. There was always a ‘Hopalong Cassidy’ movie or something with Roy Rogers, along with cartoons,” Campbell says. “I remember when I was like 7 years old, thinking, ‘I’ve never seen animals like that mouse and that cat, and I’ve been to the zoo.’

“I told my great-grandmother about it, and she said, ‘No, no. Ronnie, those are just drawings,’” he says with a chuckle.

Campbell recalls being awed by the notion of transforming piles of illustrations into movement.

“In my (mind), it was like, ‘You mean I could do drawings that could come alive? Not even Rembrandt could do that, you know?”

That concept turned a pastime to a passion, and eventually a profession.

“As I grew, I went to the big library in the city of Melbourne. I climbed up step ladders to pull down everything I could find on animation and how to make drawings come alive. There was no animation in Australia at the time, but I did go to (Swinburne Art Institute in Melbourne) and when I came out of art school, television arrived and I was able to walk around the streets of Sydney, pretending I knew how to animate cartoon commercials.”

It’s hard not to join in the laugh when Campbell — famous for drawing images of the Beatles, including one in which teenage girls scream in front of a television set showing the Fab Four performing on “The Ed Sullivan Show” in 1964 — talks about his first professional commercial. It involved an altogether different kind of bug and swooning.

“My first commercial was for a bug spray,” he says. “The spray came down and sprayed a centipede and the centipede had to collapse and say, ‘Oh, no!’ I had to do about a 100 drawings for a 15-second television spot, and every drawing had to have about 100 legs. I sat there grinding out legs and legs and legs, and I’m thinking to myself, they don’t even know it but I would pay them to let me do this. Of course, today I’d rather die almost than do a hundred drawings of a centipede collapsing.”

Campbell began his animation career in the late 1950s, doing work on “Beetle Bailey,” “Krazy Kat” and “Cool McCool,” and went on to Saturday morning cartoons including the “Beatles” series, which ran from 1965 to 1969.

After working for Hanna-Barbera for a year, Campbell started his own company and then received another call from King Features, which was at work on an animated feature film, “The Yellow Submarine.”

“They were having production difficulties and (asked) could I help by animating. My colleague Duane Crowther and I made about 11 minutes of the film. I animated many scenes,” he says.

Personally, Campbell may not have been swept up in Beatlemania in the very beginning, but he sure does appreciate the band’s legacy.

“Fifty percent of my shows are based on the ‘Yellow Submarine’ and the Beatles cartoon. Beatles fans are legion. They’re crazy, they love the Beatles and they love to buy my paintings based on the Beatles,” he says. “But many people also like my Scooby-Doos and Jetsons and Rugrats and Smurfs.”

A piece of childhood

During his professional career, Campbell didn’t get much of a chance to hear from audience members, outside of statistics about numbers of viewers tuning in on a given week. So, he enjoys seeing firsthand the nostalgic effect his pop-art has on people who once tuned into Saturday Morning Cartoons.

Revisiting those memories can be emotional, Campbell adds. Usually, when someone purchases a piece of art, he will issue a certificate of authenticity, which gets an on-the-spot drawing.

“A young woman came in once — she was in her late 20s, perhaps. She purchased a Smurf piece … and asked me if I could draw a Smurfette for her,” he says.

Campbell was in the midst of drawing the blue-hued character when the woman, who watched the “Smurfs” as a kid throughout the 1980s, wistfully mentioned that she always wished the blond-haired character had had dark hair, like her own.

“When I dipped the brush in black paint and started to paint Smurfette’s hair black, the lady started to cry. She did! It’s not all that unusual for people to cry when I do a drawing — something about the memories. It was something she had wished for when she was about 7 or 8.”

But be forewarned. If you cry, expect to be razzed by the artist.

“I tease them unmercifully,” he says.