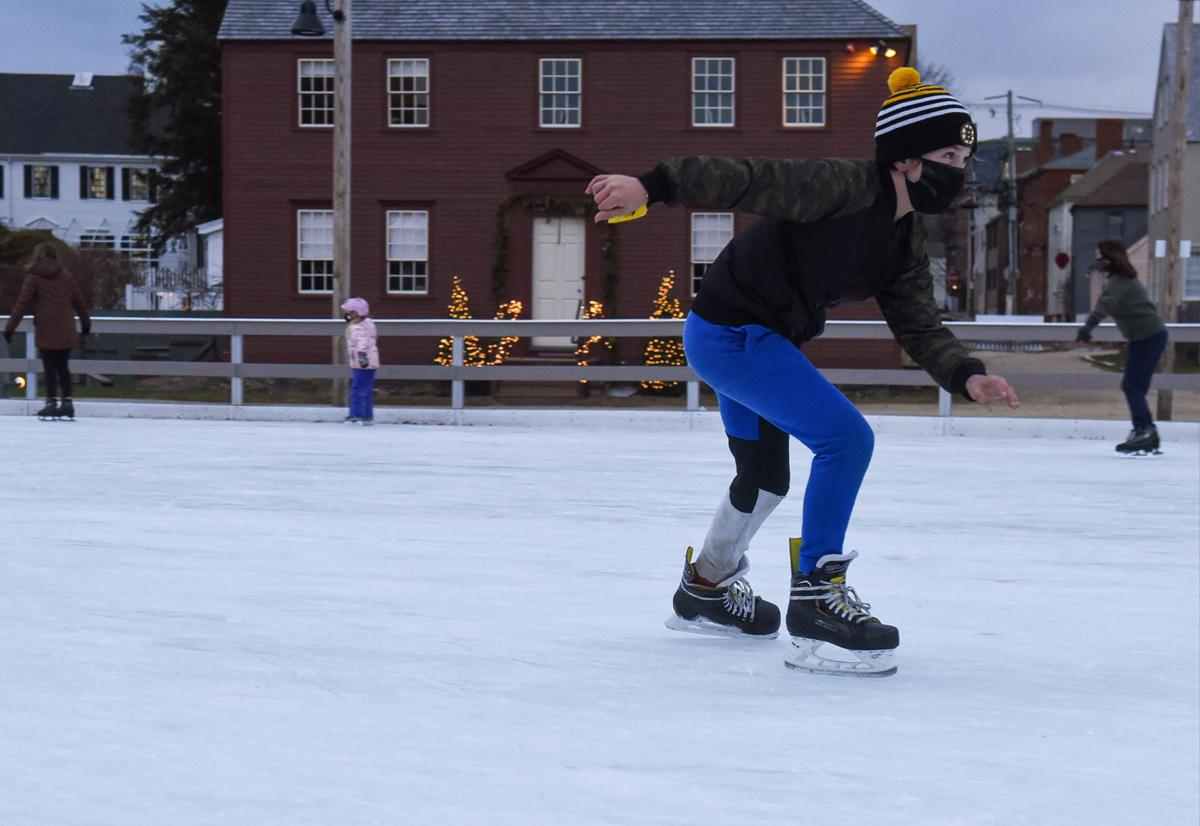 Jackson Lore, 10, from Portsmouth, enjoys a public skating session at Labrie Family Skate at Puddle Dock Pond, a rink on the grounds of the Strawbery Banke Museum in Portsmouth. 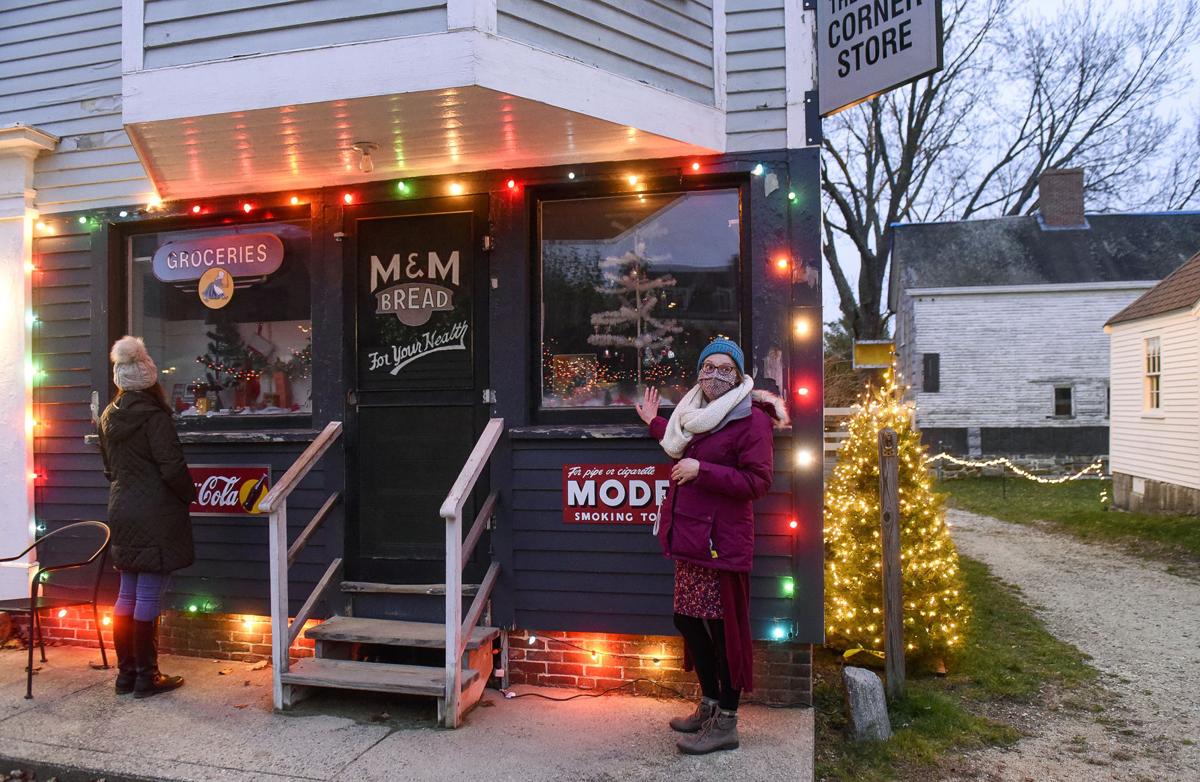 Amy Warnock, special events manager, right, pauses outside the 1940s-era “little corner store” to explain how the Candlelight Stroll Under the Stars will look this year at Strawbery Banke Museum in Portsmouth. 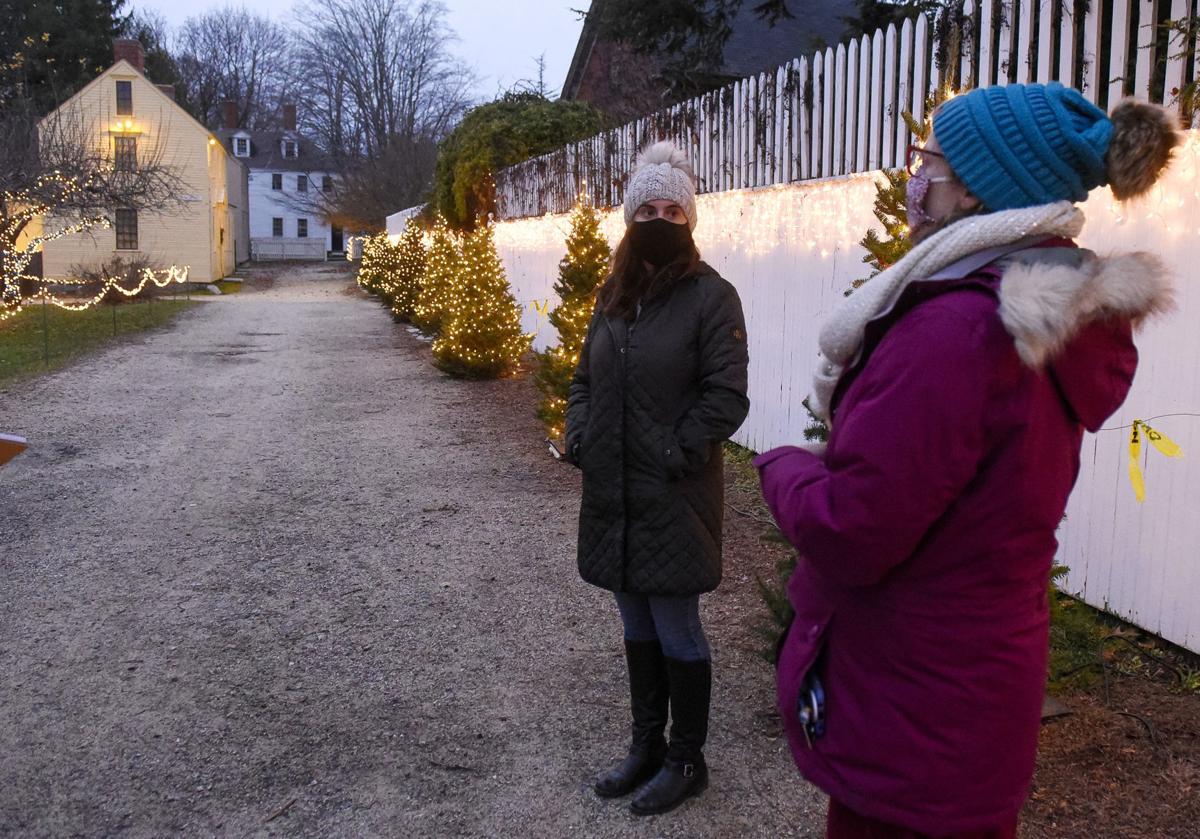 In face masks, Veronica Lester, left, director of marketing, and Amy Warnock, special events manager, walk a picturesque lane decorated with lights and some of the 50 evergreen trees brought in for the outdoor Candlelight Stroll Under the Stars event at Strawbery Banke Museum in Portsmouth. The stroll begins Friday night.

Jackson Lore, 10, from Portsmouth, enjoys a public skating session at Labrie Family Skate at Puddle Dock Pond, a rink on the grounds of the Strawbery Banke Museum in Portsmouth.

Amy Warnock, special events manager, right, pauses outside the 1940s-era “little corner store” to explain how the Candlelight Stroll Under the Stars will look this year at Strawbery Banke Museum in Portsmouth.

In face masks, Veronica Lester, left, director of marketing, and Amy Warnock, special events manager, walk a picturesque lane decorated with lights and some of the 50 evergreen trees brought in for the outdoor Candlelight Stroll Under the Stars event at Strawbery Banke Museum in Portsmouth. The stroll begins Friday night.

T here’s a decidedly festive air, but things do look a little different this year along the quaint lanes of Strawbery Banke Museum in Portsmouth.

Doors to the historic houses are shuttered, horse-drawn carriage rides are stabled and the tinsmith is selling his wares through a first-floor window rather than inviting customers into his shop.

There’s 350 years of history here, but it’s 2020 that is shaping how people will stroll into the past this holiday season.

So, just a tip: If the air raid warden outside the World War II-era Marden-Abbott grocery store issues some official-sounding protocols, there’s a good chance he’s not just reenacting a piece of the Seacoast’s storied past.

The museum’s marketing director, Veronica Lester, and special events manager, Amy Warnock, are bundled up against the cold but warm in spirit on a recent preview of the renamed Candlelight Stroll Under the Stars, an outdoors-only event this year.

“We’re trying to give people a feeling of normalcy” in an atypical holiday season,” Lester said.

The skies have darkened after a typically early December sunset and we’re taking in the glittering electric lights that will be complemented by scores of pathway lanterns during the two weekends of the 41st stroll Dec. 11-13 and 18-20.

Nearby, laughter and the clink of blades on ice spills out from Labrie Family Skate at Puddle Dock Pond, an outdoor seasonal rink that welcomes the public on a first-come, first-served basis at the center of the museum’s grounds. Even with all the modern-day winter coats and hats, there’s a Currier and Ives feel to the scene as skaters glide under the sentry of centuries of Seacoast life.

Meanwhile, members of the museum’s properties department are bustling about the historic buildings, stringing more lights on trees and doorways and illuminating decorations crafted by horticulturalists from dried flowers and herbs grown in Strawbery Banke’s gardens.

The holiday decor will remain up through December, so people who don’t have tickets to the stroll can still walk the grounds when the gates are open.

Though tickets to the stroll were snapped up quickly — 1,400 tickets were sold during Thanksgiving weekend alone — Lester said COVID-19 restrictions might affect attendance.

For that reason, there’s a link to a waiting list set up on the museum’s website at www.strawberybanke.org. Museum officials, who have already reached out to a few people on the list, are notifying people as cancellations come in.

Room with a view

This year, there are outdoor areas that are getting some extra touches, and Lester has a special fondness for all the lighted lanes, gardens and orchards.

“I actually live here in one of the houses. It’s part of the heritage house program. The bottom floor of many of the houses is museum space and upstairs has been renovated into a modern apartment or an office that they rent out. The revenue goes to maintaining the house. It’s very unique living here. I moved here in June 2019. It’s nice. I’m so spoiled.”

Over the past 40 years, 9,000 to 10,000 people have attended the Candlelight Stroll each December, which typically takes place on Saturdays and Sundays over the course of three weeks.

The renamed Candlelight Stroll Under the Stars will take place over just two two weekends, but it will be extended from two to three days — Fridays through Sundays, Dec. 13-20, on the 10-acre museum grounds. However, only 3,000 total tickets are being sold this year. Attendees, who will be staggered in hour-long, self-guided tours, must wear masks.

Though only a third of the usual capacity is being allowed on site, Warnock said a silver lining is that people who usually don’t stop and chat with role players and staff might take advantage of the extra elbow room and pause to ask questions about various buildings, eras and traditions.

The Candlelight Stroll is one of the hallmarks of Portsmouth’s Vintage Christmas celebration, presented by Strawbery Banke Museum and The Music Hall, in partnership with the City of Portsmouth, Greater Portsmouth Chamber Collaborative and Discover Portsmouth. The theme this year is “Let the Magic Shine Through.”

With the shift to an outdoor-only stroll, the museum asked members of the community, non-profit organizations and area companies to help spruce up the grounds by purchasing and trimming holiday trees. Fifty evergreens were brought in, of which 39 are sponsored.

Six house museums will be spotlighted on the tour, with staff, volunteers and junior role players representing specific people who lived in the houses and people from the community at various time periods, Warnock said.

“It’s all about flexibility, that’s our key theme this year,” Warnock said with a smile.

Usually, up to 30 role players — many contracted from around the region — would be on the grounds on a given night, but this year the number has been reduced to 10 a night, with volunteers taking on back-up roles for staff this year.

Visiting Strawbery Banke, where the oldest house dates to 1695, is like flipping through a living scrapbook of eras from one house to the next, each in the midst of winter season traditions, including Hanukkah celebrations at the Shapiro House, where Russian Jewish immigrants Abraham and Sarah Shapiro lived from 1909 to 1928 and were part of the founding of Temple Israel in Portsmouth. (Hanukkah starts today at sunset.)

Over the past 40 years, one of the most popular stops on the stroll has been the World War II-era Abbott Store, with its nostalgic sense of 1940s-era Americana. Warnock and Lester explain that this neighborhood shop is like a doorway into the start of the modern Christmas season we celebrate today. There are colored electric lights strung outside, and their hues light up signs for groceries, including M&M’s Bread — “For Your Health.” On this day, a glimpse of a display tells us 23 days remain until Christmas.

It’s a reflection of the past in a decorated storefront window — a glimpse of the world the widow Berta Abbott was experiencing as she ran the neighborhood grocery shop in the midst of World War II and the country’s food-rationing efforts.

The sight just may may draw back curious visitors when restrictions ease and they can explore the insides of the shop, with its glass display cases, Zagnut bars and tinned cans.

“It’s just a teaser, the trailer for the movie,” Warnock jokes.