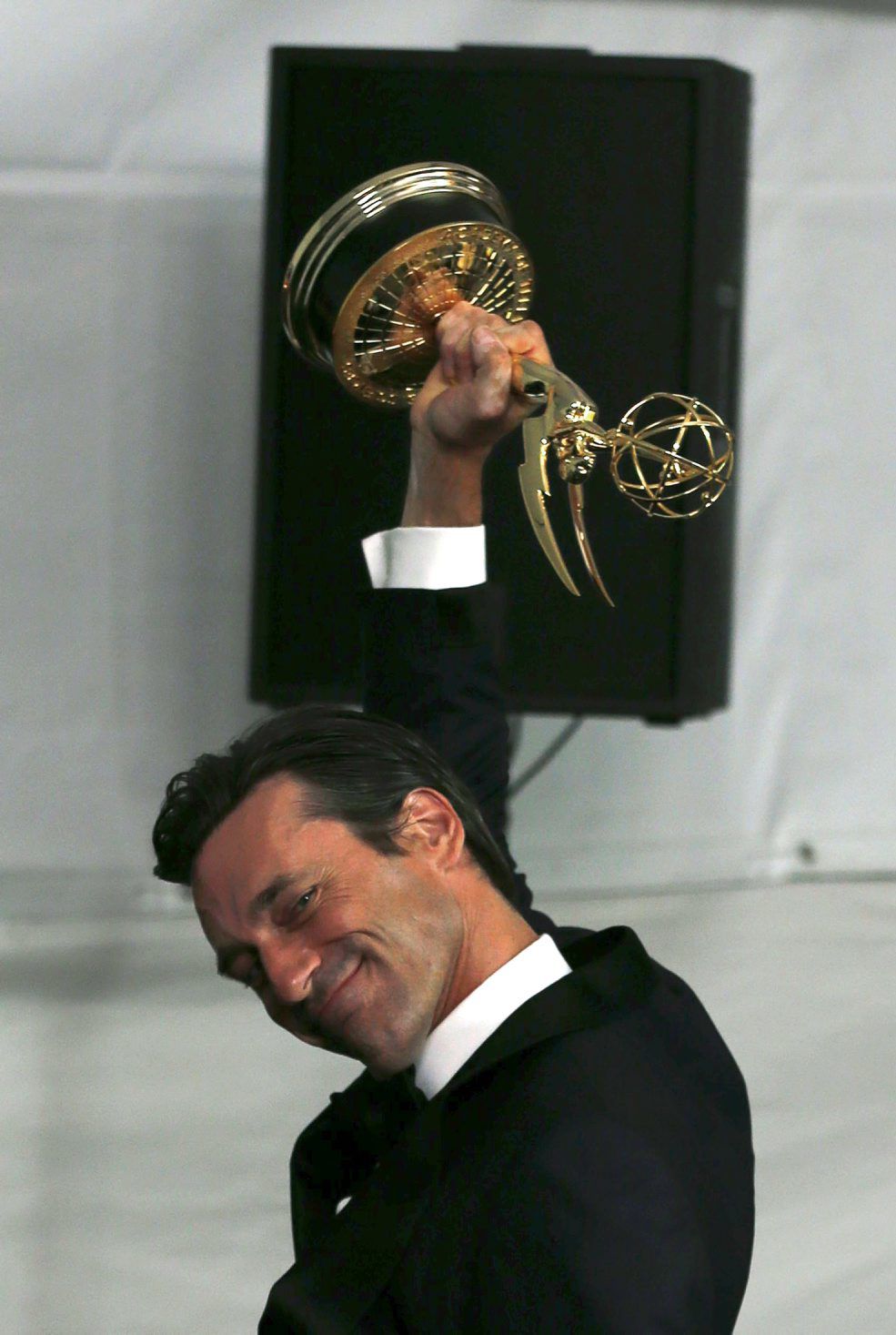 Jon Hamm celebrates with his award for Outstanding Lead Actor In A Drama Series for AMC's "Mad Men" as he departs the backstage area at the 67th Primetime Emmy Awards in Los Angeles on Sunday. 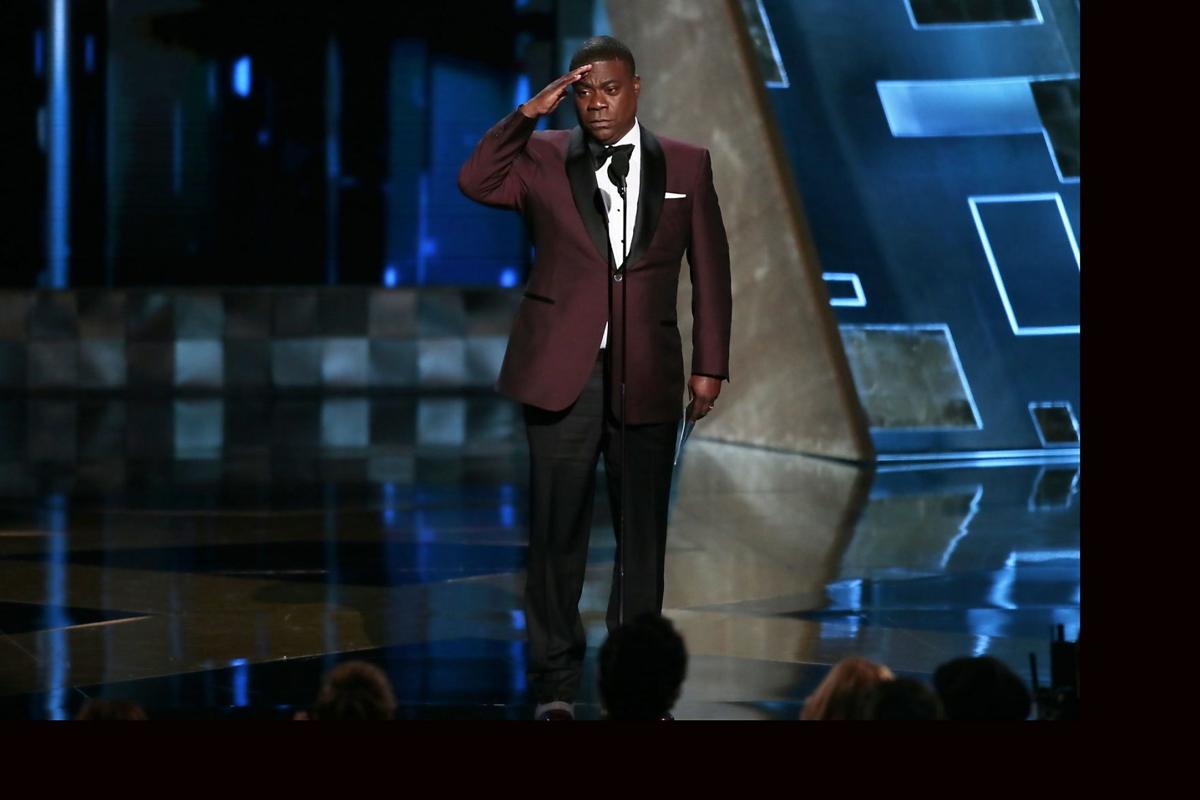 Tracy Morgan makes an appearance during the 67th Annual Primetime Emmy Awards at the Microsoft Theater in Los Angeles on Sunday.

Jon Hamm celebrates with his award for Outstanding Lead Actor In A Drama Series for AMC's "Mad Men" as he departs the backstage area at the 67th Primetime Emmy Awards in Los Angeles on Sunday.

Tracy Morgan makes an appearance during the 67th Annual Primetime Emmy Awards at the Microsoft Theater in Los Angeles on Sunday.

LOS ANGELES - HBO shows "Game of Thrones" and "Veep" won the top prizes at the Emmy Awards for the first time on Sunday, bringing a breath of fresh air to television's biggest night on an evening that also made history for black actresses.

"There's been a terrible mistake clearly," said Hamm, who clambered onto the stage rather than walking up the stairs. "It's incredible and impossible for me to be standing here."

Hamm said playing a character like the secretive Draper for so long had been both a blessing and a curse.

"It doesn't come without a cost and a lot of mental and emotional baggage that gets torn through and weighs on you after a while," he told reporters backstage.

But "Mad Men," a four-time best drama series winner, was shut out of all the other categories and had to be content with just Hamm's Emmy after closing its final season earlier this year.

Instead, the 18,000 voters of the Television Academy threw their support behind the HBO medieval fantasy series "Game of Thrones," which was the night's biggest winner with 12 Emmys.

The top Emmy prize had always eluded the series, which is based on George R.R. Martin's books about blood-thirsty nobles and warring kingdoms, despite its 20 million viewers in the United States. On Sunday, it also won awards for writing, directing and for supporting actor Peter Dinklage.

Backstage, co-creator Dan Weiss said the "Thrones" team had known it would take a while to win over the Television Academy.

"We knew there'd be some resistance to the idea that a show set in this genre, as opposed to crime shows or Westerns, could be a serious drama," he said.

"(But) we knew if we did our jobs and were fortunate to be blessed with the cast and crew that we have, we'd get there eventually."

"I think we just get better with every season we do, but also she became president so that gave us lots of challenges," "Veep" creator Armando Ianucci told reporters about the show's rise to the top. "Everything Selina does now has terrible international impact, so it made everyone raise their game."

On a milestone night for diversity, Viola Davis became the first African-American to win a drama lead actress Emmy for her role as a tough criminal defense lawyer in ABC's "How to Get Away With Murder."

"The only thing that separates women of color from anyone else is opportunity," Davis said in an emotional acceptance speech. "You cannot win an Emmy for roles that are simply not there." Davis thanked all the writers and producers "who have redefined what it means to be beautiful, to be sexy, to be a leading woman, to be black."

Two other black actresses, Uzo Aduba ("Orange is the New Black") and Regina King ("American Crime"), were also among Sunday's winners, while Jill Soloway joined the small club of women to win a directing Emmy, for the transgender comedy "Transparent."

In the first Emmys for Amazon.com's foray into original content, "Transparent" also won four other Emmys, including lead actor for Jeffrey Tambor.

Tambor, 71, won for his role as a father who transitions to a woman, and he dedicated the award - his first Emmy - to the transgender community.

"Inside Amy Schumer," the no-holds-barred female comedy which is written and directed by Schumer, proved a popular first-time winner in the variety sketch series category.

But Schumer, the hottest new talent in comedy, could not dislodge perennial Emmy favorite "The Daily Show with Jon Stewart," which won three Emmys for best variety series, writing and directing.

Comedian Tracy Morgan graced the Emmy awards on Sunday in his first live public appearance since suffering life-threatening injuries in a deadly car wreck more than a year ago, cracking a joke and receiving a warm welcome from his television peers.

Morgan, 46, one of the stars of "30 Rock" and a former cast member of "Saturday Night Live," walked confidently on stage to a standing ovation as he presented the night's top award for best drama series.

"Last year Jimmy Kimmel said on this stage, 'We'll see you next year, Tracy Morgan.' Well Jimmy, thanks to my amazing doctors, beautiful family and wife, I'm here, standing on my own two feet," Morgan said.

"It's been a long road back, I suffered a traumatic brain injury that put me in a coma for eight days and when I finally regained consciousness, I was ecstatic to learn I wasn't the one who messed up."

In a year when the surprises came from the winners rather than on-stage antics at the Emmy awards, Morgan's return was a standout moment on the night honoring television's top achievements.

The comedian suffered broken bones as well as a serious brain injury in the June 2014 highway accident in New Jersey that left another passenger in the limousine van they were traveling in, comedian James "Jimmy Mack" McNair, dead. A speeding Wal-mart truck driver who had been awake for 28 hours was held responsible for the accident.

While Morgan was still not fully back to his bawdy, wisecracking self, he did tap his trademark humor on Sunday ahead of presenting the Emmy award for best drama series to "Game of Thrones."

"It's only recently that I've started to feel like myself again, which means a whole lot of women, y'all gonna get pregnant at the after-party," he quipped, receiving loud laughs from his peers.

Backstage, an emotional Morgan, with tears in his eyes, told reporters that being back on stage was "very overwhelming."

"Part of my therapy was seeing TV and seeing my friends and saying, One day I'll be back," he said.

Morgan said his publicist had encouraged him to come to the Emmys, saying, "Maybe you should let Hollywood welcome you back home."

It's been a long road to recovery for Morgan, who in a television interview earlier this year was seen wiping away tears and holding a black cane, saying he needed more time to heal.

Morgan will host of the Oct. 17 episode of "Saturday Night Live."