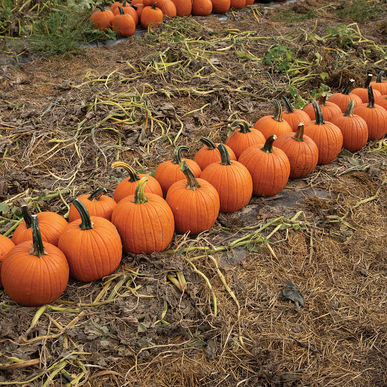 Renegade Pumpkin was developed at the New Hampshire Agricultural Experiment Station at UNH.

Renegade Pumpkin was developed at the New Hampshire Agricultural Experiment Station at UNH.

DURHAM — Gardeners preparing to plant their fruits and vegetables have several new pumpkin, squash, and melon varieties to choose from this year that were developed at the New Hampshire Agricultural Experiment Station at the University of New Hampshire by a researcher who leads the longest continuous squash and pumpkin breeding program in North America.

His most recent work has resulted in the commercial release of several new cucurbit varieties. The new varieties are well-suited to state and regional growing conditions, have improved marketing qualities, and exhibit intermediate resistance to powdery mildew disease.

“Development of new varieties is a key underpinning for production of abundant and nutritious vegetables. Improved variety performance in terms of yield, quality and ease of culture is paramount,” Loy said.

Three new pumpkins, a summer squash, a butternut squash, and a melon have been released and are available in 2019 seed catalogs.

According to Johnny’s Selected Seeds, Renegade is a reliable producer in the medium to large class size with a striking, rich orange color. It is thick-walled and blocky round. Pumpkins average 14 to 18 pounds and have a strong handle and medium vine.

Rupp Seeds, which carries several UNH-developed pumpkin varieties, has released Carbonado Gold pumpkin, describing it as an attractive pumpkin in the 15 to 20-pound class with a sturdy and slightly smaller handle than Renegade, but with earlier maturity.

As with Renegade, the handles hold up well after harvest, giving growers a higher percentage of marketable pumpkins.

Finally, Mellow Yellow is available from several seed companies. It is a large yellow pumpkin following in the footsteps of Owl’s Eye, a light yellow UNH release carried by High Mowing Organic Seeds.

According to the news release, Slickpik varieties carry the gl-2 mutant for reduced spines on stems and leaf petioles, thus reducing fruit abrasions that develop into unattractive brown discolorations, well as reducing skin irritation to workers during harvest.

An F1 hybrid, Gabrielle is similar to the open pollinated variety Waltham Butternut, but with resistance to powdery mildew disease and having higher carotenoid content, giving darker flesh color and higher nutritive value to squash.

True Love melon, released by High Mowing Organic Seeds, is an eating melon described as having exceptionally high sugars and near-perfect texture designed to complement its sister variety, First Kiss F1. It is resistant to fusarium wilt and powdery mildew.

Along with cucurbit breeding introduced by the late Dr. Yeager in 1940, this breeding research represents the longest continuous squash and pumpkin breeding program in North America.

According to UNHInnovation, UNH has executed 58 exclusive licenses with nine partners for inbreds and hybrids developed by Brent.

Throughout his career at UNH, more than 200 hybrids and inbreds have been licensed or utilized in trial and germplasm agreements. Royalties generated by this portfolio continue to increase each year, including an expected 10 percent increase from last year. Royalties have generated more than $2 million since commercialization began of these varieties, the news release states.

“Dr. Loy’s breeding work has been an excellent source of new varieties for High Mowing because of his intense focus on eating quality,” said Dr. Jodi Lew-Smith, leading member of High Mowing’s product development team and the head of the breeding program.

“He is especially unique in this regard when it comes to winter squash; he tests for sugars and dry matter every year and in every line, which has resulted in the release of some of the best-fleshed varieties on the market today,” Lew-Smith said. “We are proud to be the exclusive vendors of a number of his releases, and we value our ongoing relationship with his program.”

“Brent is an extremely talented breeder with great attention to detail and a deep understanding of squash and pumpkin genetics,” Wyatt said. “Each year, he generously hosts us for a tour of his research plots, and I’m fascinated by all of his projects and always learn a great deal. Brent’s breeding work has also strengthened the squash and pumpkin breeding program at Johnny’s for many years, providing many high-quality parent lines of diverse types of squash and pumpkins for us to use in our breeding work.”

Wyatt concluded: “We’ve also been proud to release varieties developed at UNH, such as our recently released Renegade pumpkin and our Honey Bear acorn squash. We are very appreciative of Brent’s many contributions to the squash and pumpkin community.”