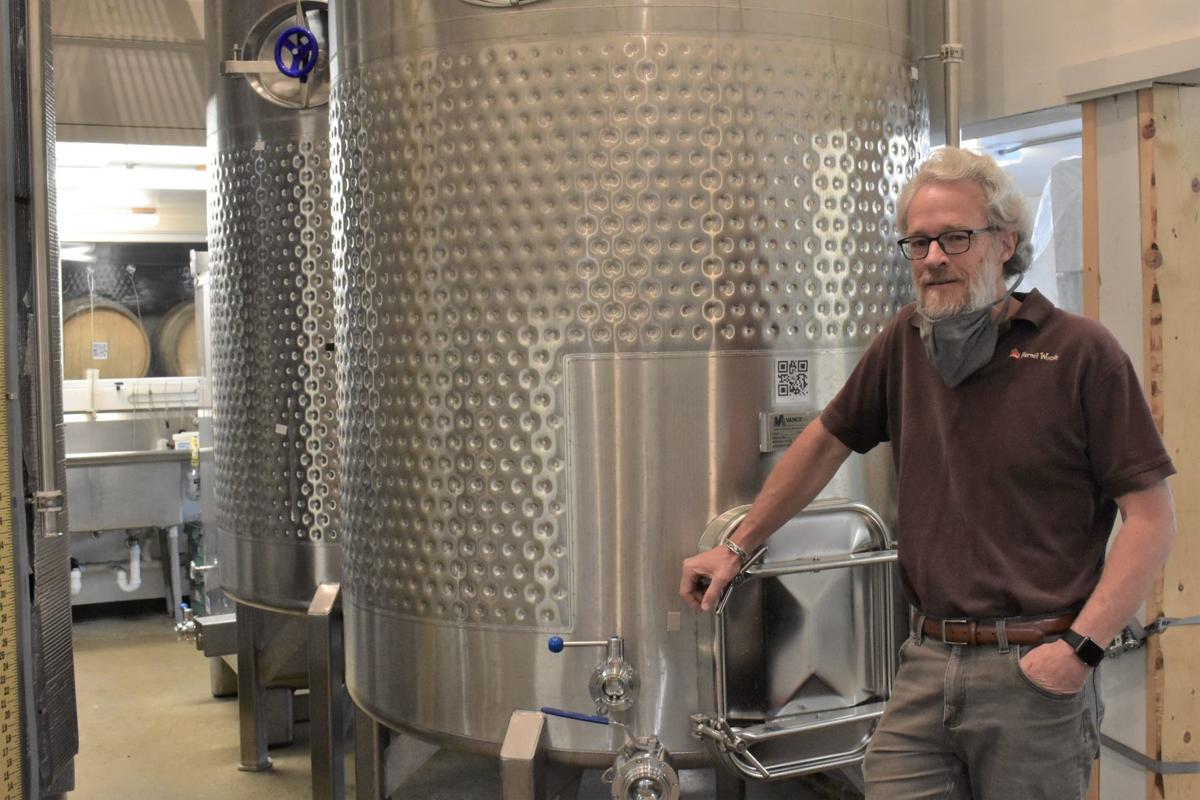 Bob Manley, a marketing guru and partner in Hermit Woods Winery, stands in the basement level of the business next to the stainless steel tanks that helped the company produce 4,200 cases of fruit wine last year. 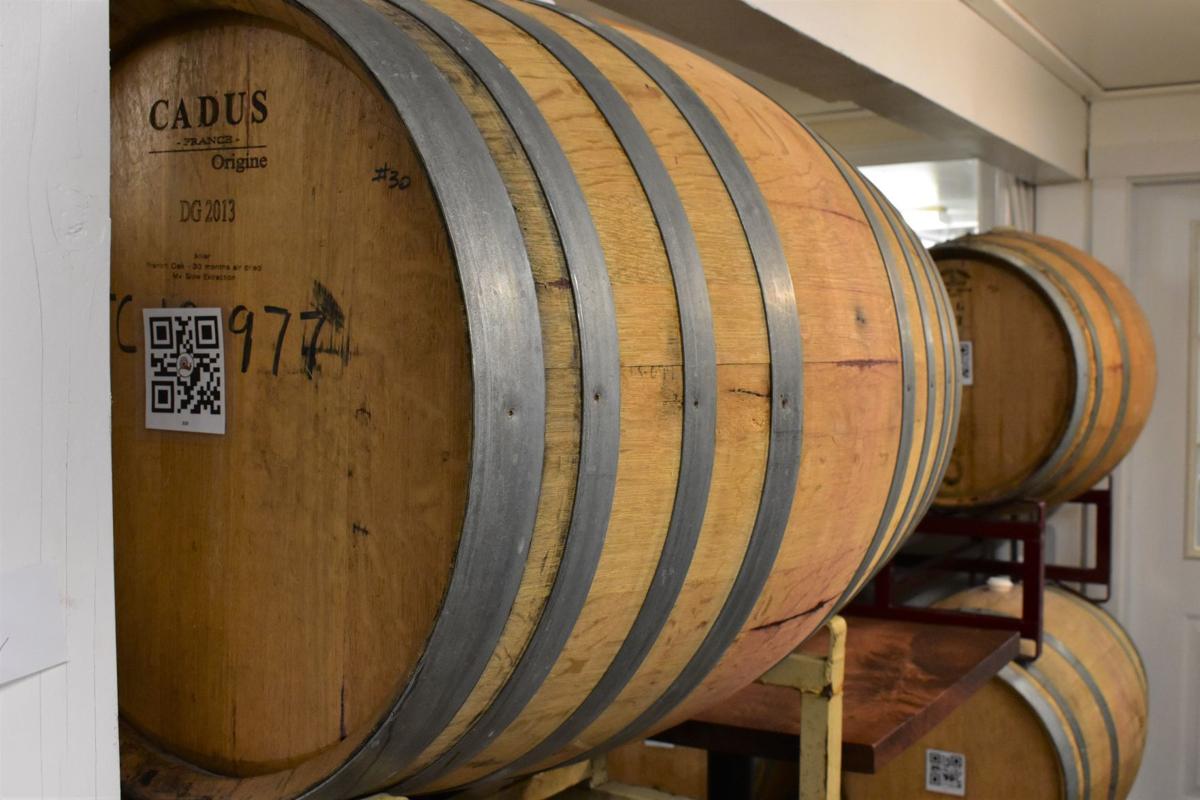 Hermit Woods uses barrels made of French oak to age some of its fruit wines and is expanding and upgrading its barrel room to hold 60 barrels and serve as a backdrop to allow customers to taste its library collection of wines that have aged for 10 years. 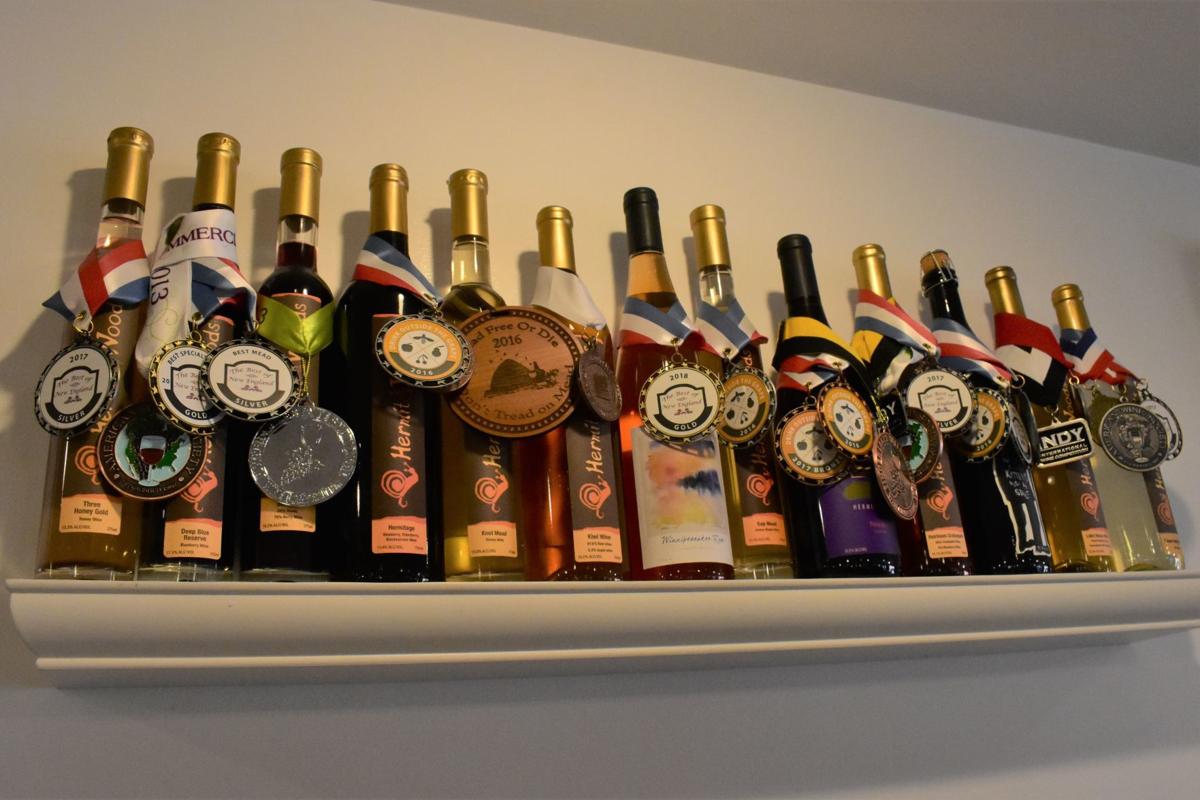 The New World fruit wines produced by Hermit Woods Winery of Meredith have consistently won awards and been recognized by leading winemakers including Randal Graham, founder of Bonny Doon Vineyard and fellow Californian Giddeon Binstock, who has decades of experience in winemaking, sales and viticulture for Renaissance the pioneering winery in the Sierra Foothills. 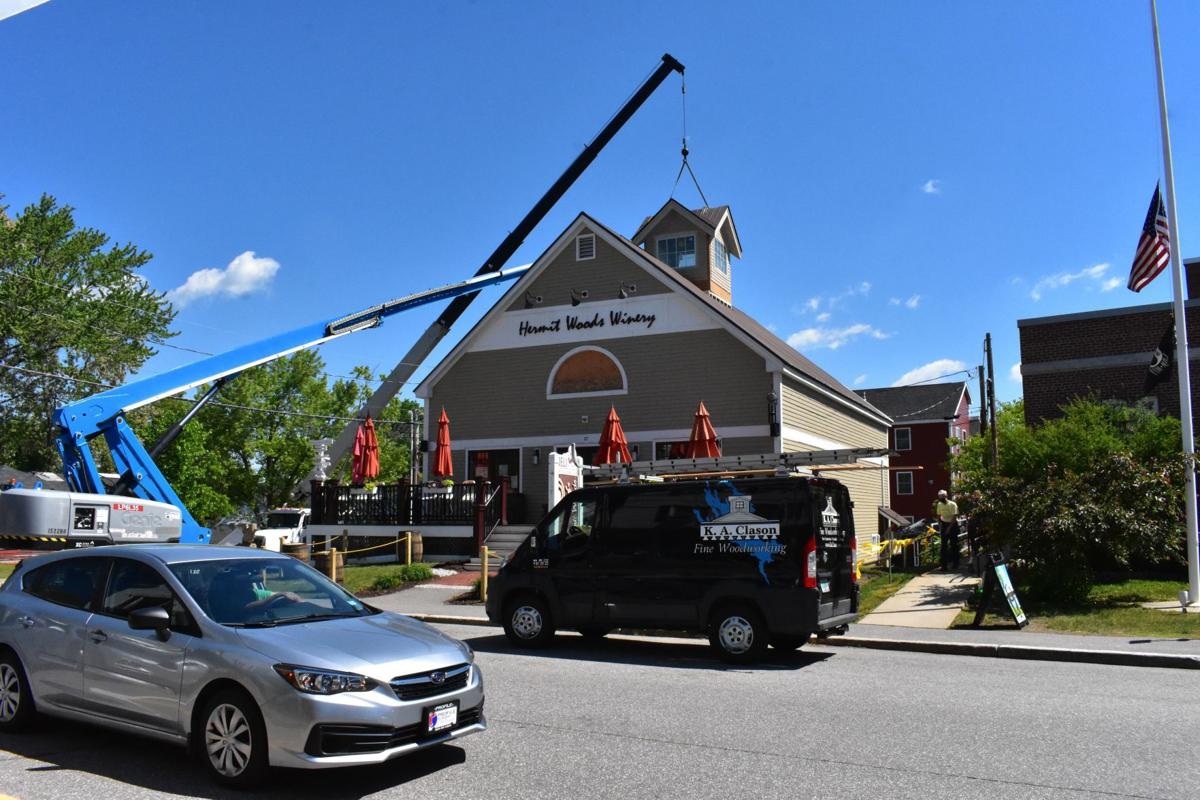 East Coast Crane lifts a new cupola into place atop Hermit Woods Winery on Main Street in Meredith. The building is undergoing extensive renovations to the third floor to create a listening room, a music venue where the focus is on the musician and the audience is expected to remain quiet. A sound design company is handling the acoustics and the winery hopes the venue will attract some world-class musicians. 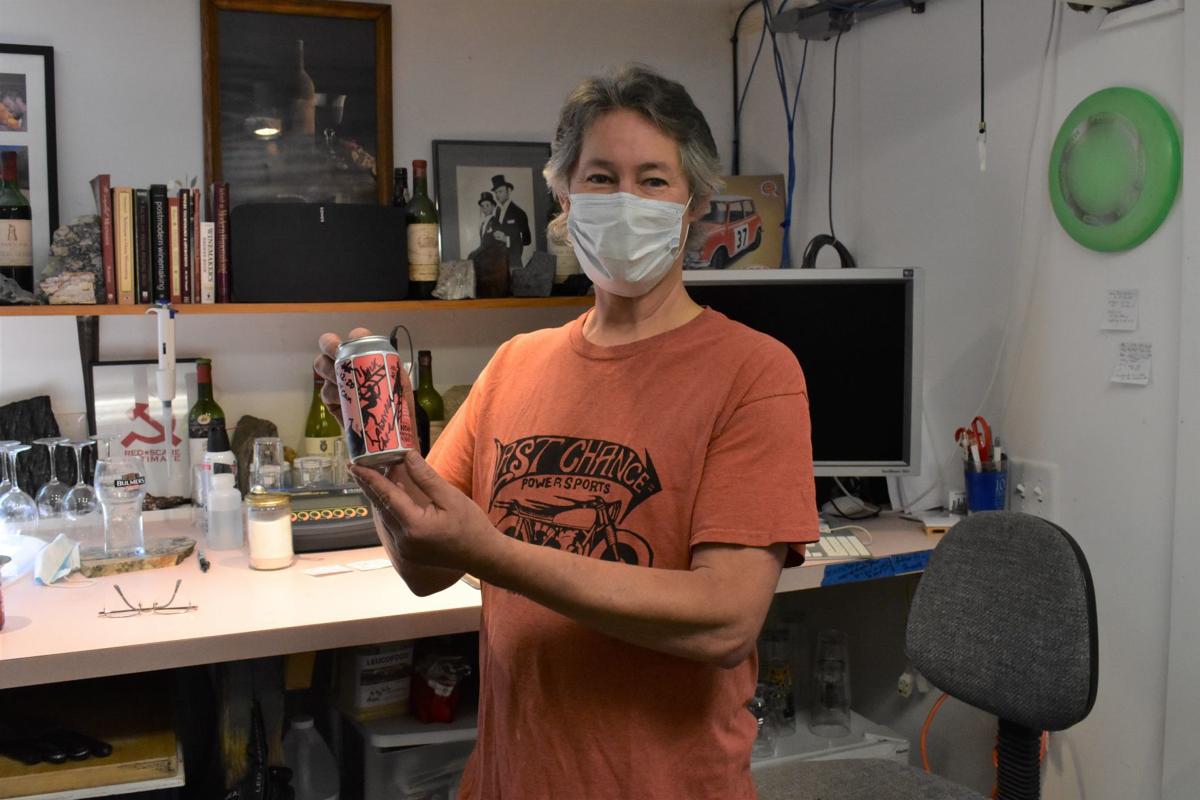 Hermit Woods winemaker Ken Hardcastle holds a can of Hermit Hard Cranberry Apple Cider that was signed by all three partners of the winery at the request of a member of their wine club. The hard cider was previously only available in bottles.

MEREDITH — In real estate, the three keys to determining a property’s desirability are location, location and location. In winemaking, ideal location has long meant the sacred soils of France, Italy and, more recently, California.

Fellow oenophiles Bob Manley, a doyen of marketing, and Chuck Lawrence, a commercial airline pilot and former Olympic-class cyclist, round out the team that last year produced 4,200 cases of wine.

Although they were inspired by classic wines, the three quickly determined that New Hampshire’s fickle weather and short growing season would never support the grapes they needed.

“Everything we make is from fruit we could grow in Meredith,” Manley said.

Hardcastle has perfected the vagaries of fermenting local fruit beyond typical wine grapes in dry styles, allowing the complexity and character of its main ingredients to shine through.

Manley says he regularly turns classic wine drinkers on to their new world fruit wines, which the newcomers discover can be as serious and delicious as wines from grapes.

“We make wines that are pleasing to the palate. That’s our mission and we’re sticking to it,” Manley said.

Hermit Woods has racked up accolades for its fruit wines, which “drink like classic wines from notable regions of the world.” They were the first winery in the state to age wine and Manley said some of their offerings “are well-suited to lay down in your cellar for 10 or more years.”

They source the bulk of their fruit in New England and purchase 25,000 pounds of wild Maine low bush blueberries every year, much of which is used to make their Petite Blue Reserve.

In June 2019, “O, The Oprah Magazine” named Petite Blue Reserve the one thing not to miss when you visit New Hampshire.

The winery’s Petite Blue Reserve was also featured on the Today Show in 2014. In the Thanksgiving issue of Food & Wine Magazine, editor Ray Isle called it out as his pick for the best craft beverage in the Granite State.

While some businesses are contracting as a result of COVID-19, Manley said the winery’s evolving business model has helped it survive a body blow from the pandemic.

Hermit Woods is renovating its barrel room to increase its capacity to 60 barrels and will be adding rock veneer to the walls and paneling the ceiling.

For the past three years, 10% of the sales of Hermit Woods Winnipesaukee Rose has benefited the namesake association that helps protect the watershed of the state’s largest lake. The newest benefactor of the wine’s sales is the Greater Meredith Program, the town’s Main Street initiative. The wine sells for $24.99 at New Hampshire Liquor & Wine Outlet stores.

“Our success is entirely connected to the community. If the larger community succeeds so will we,” Manley said.