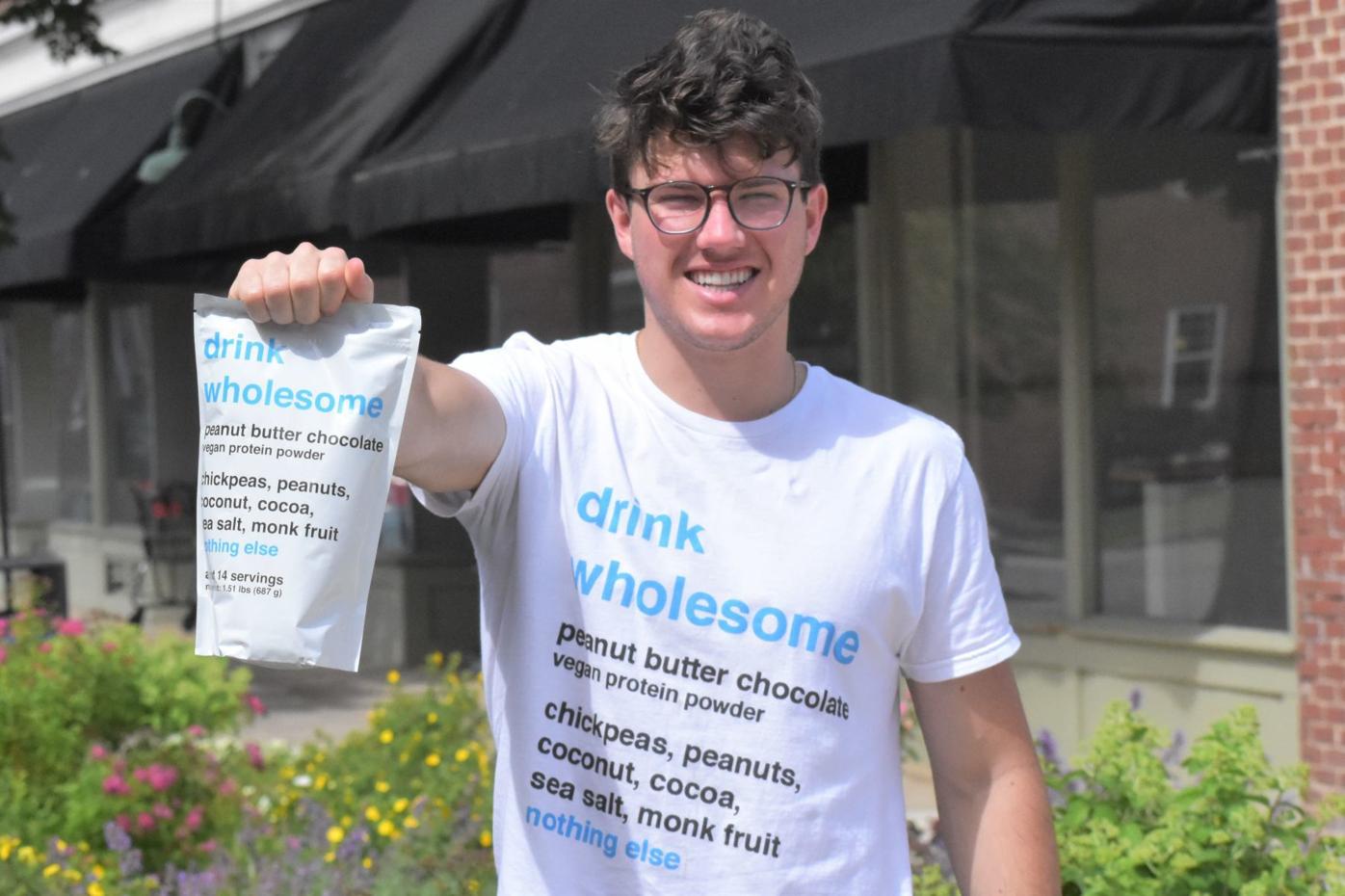 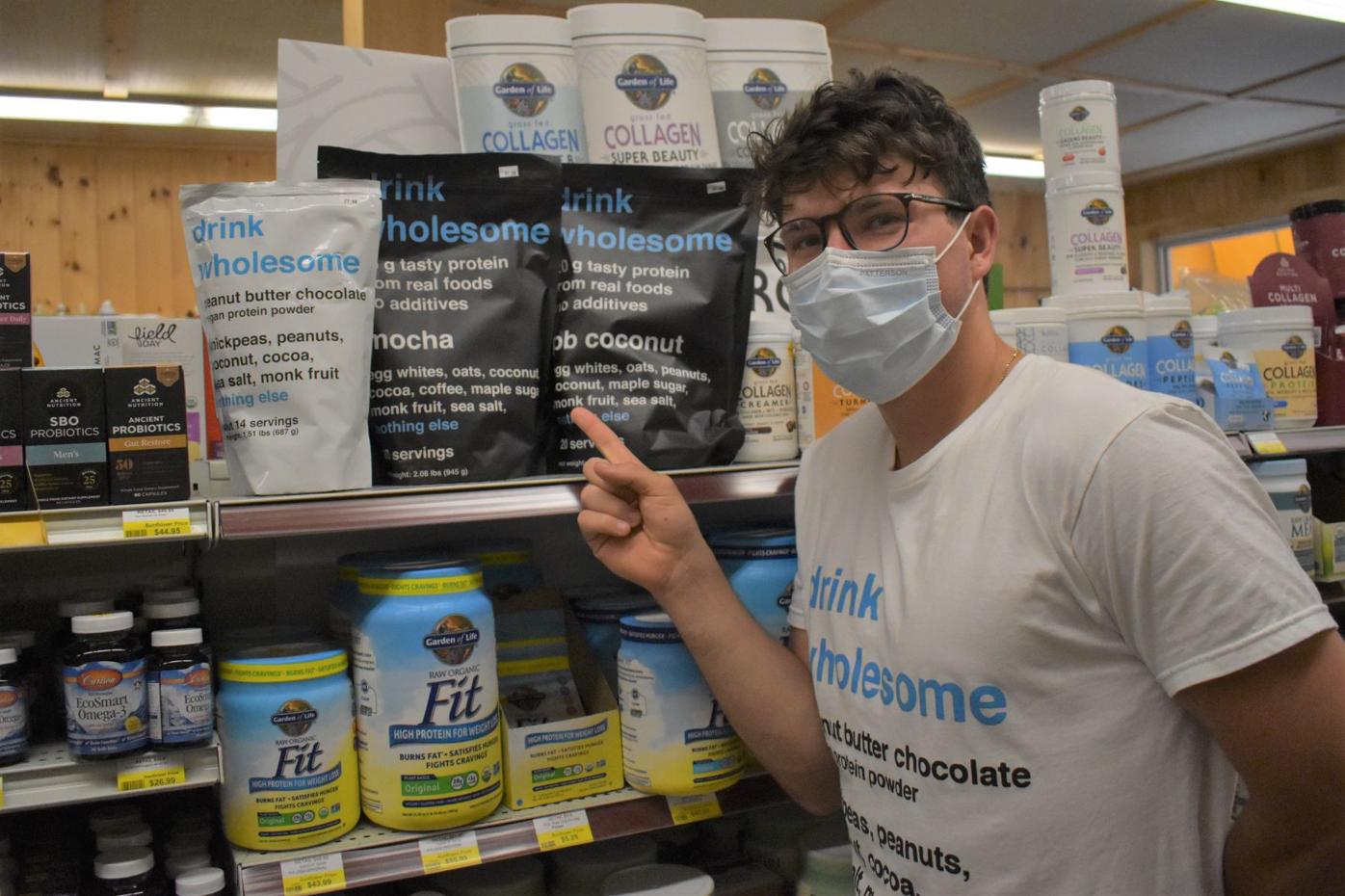 Jack Schrupp of Gilford points out the top-shelf placement Drink Wholesome, the protein powder he developed, has received at Sunflower Natural Foods in Laconia. 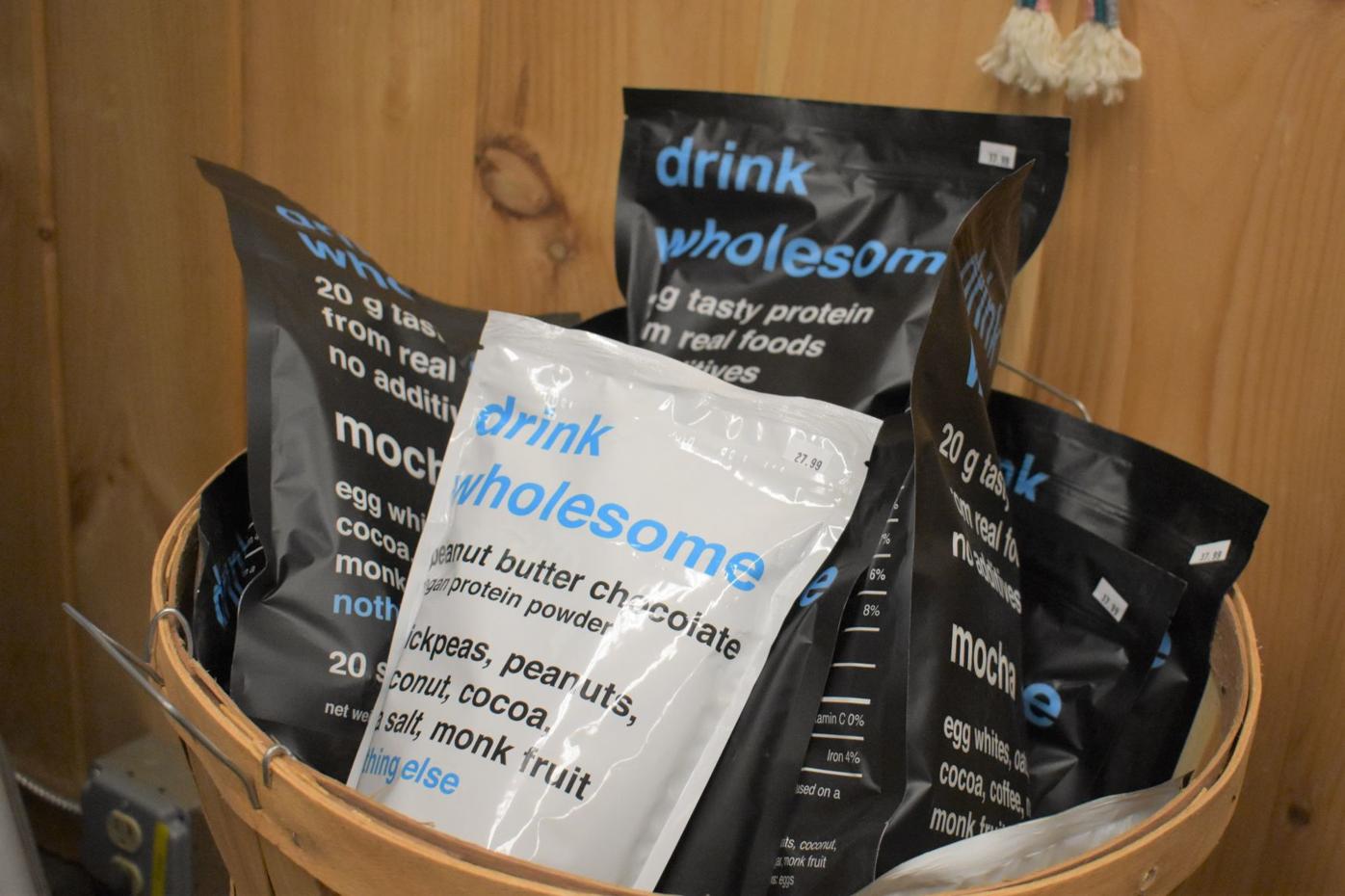 A basket of Drink Wholesome protein powder on display at Sunflower Natural Foods in Laconia.

Jack Schrupp of Gilford points out the top-shelf placement Drink Wholesome, the protein powder he developed, has received at Sunflower Natural Foods in Laconia.

A basket of Drink Wholesome protein powder on display at Sunflower Natural Foods in Laconia.

GILFORD – Jack Schrupp is no stranger to fitness. He grew up as a member of the Gunstock Ski Club racing in Nordic events and rowed in the off-season to keep conditioned. He continued as a two-sport athlete when he went to college, where he also laid the groundwork for his future as an entrepreneur.

As a competitive endurance athlete, Schrupp used protein powders as part of his training regiment. Most of those that could claim a “clean” ingredient profile were made from a single source, had a gritty texture and “tasted like dirt.” He recounted only being able to drink one hemp-based product if he added a scoop of ice cream.

While studying French and history at Williams College, Schrupp set out to make his own dairy- and additive-free recovery drink that actually tasted good. He gathered a variety of raw ingredients in his dorm room and began to figure out that food like egg whites, oats and coconut mixed best when blended, provided the needed protein and passed the palatability test.

“I got better and better at it and ultimately began sharing it with friends and teammates,” he said.

Buoyed by positive feedback from those who tried it, Schrupp decided to take the leap and make his product commercially. He used personal savings to launch the company and a steady flow of his own cash to keep things going.

At 24, after spending six months sourcing a supply chain for natural ingredients, he connected with a Cape Cod company that makes organic granola to manufacture and package the first batch of Drink Wholesome in February 2020. He invested $20,000 in the initial production run and plans to introduce new flavors, including matcha green tea, with the next.

The company had barely gotten out of the blocks when the COVID-19 pandemic struck, pushing the economy into a free fall and scuttling Schrupp’s carefully curated supply chain. The South American company that produced one of the product’s primary ingredients closed its doors.

“I didn’t have a backup plan and had to scramble to find a replacement,” he said.

The coconut gives Drink Wholesome it’s creamy texture, Schrupp said, and he had to find another company capable of freeze-drying coconut meat and grinding it into a fine powder. After identifying a vegan hot cocoa mix manufacturer, Schrupp was able to tap into their multi-ton order of coconut and restored his supply chain.

The next hurdle he faced was how to reach potential customers. While recovery drink makers traditionally attend triathlons, marathons and cycling events to get their product into the hands of endurance athletes, the pandemic cancelled all sporting events, including the Boston Marathon.

“It was a moment of crisis. I was really struggling to find a path forward,” he said.

After conferring with his mentors, he decided to launch an e-commerce platform and use the lure of free samples to get his product into play. The free trial offer proved effective with one in four people who tried the product returning to the site to buy it.

While the pandemic has added a lot of uncertainty to his business model, Schrupp said he is committed to weathering the storm and believes Drink Wholesome will turn a profit within the next year, perhaps sooner if product visibility improves as social distancing restrictions ease.

As Drink Wholesome approaches profitability, Schrupp has set his sights on becoming a mission-driven company. Conceding he is not sure just yet what that mission will be, he envisions an opportunity to give back to the local community.

“Some of my ideas include the preservation of green spaces in the state, and sponsoring local athletes looking to compete professionally in sports (cycling, triathlon, etc.) not offered at the collegiate (NCAA) level,” he said.

A French teacher, coach and dorm parent at Phillips Exeter Academy, Schrupp said he has sent his product to some elite athletes. While some are already sponsored by other protein powder makers, they have shared it with those in their circles, helping fuel sales.

In recent weeks, Schrupp has been talking with retailers to get his product on store shelves. While his e-commerce site offers free two-to-five-day shipping and a discount for an auto-delivery subscription, Schrupp said some people still like to go to a store and see and hear about a product firsthand. In the Lakes Region, Drink Wholesome can be found at Sunflower Natural Foods in Laconia.