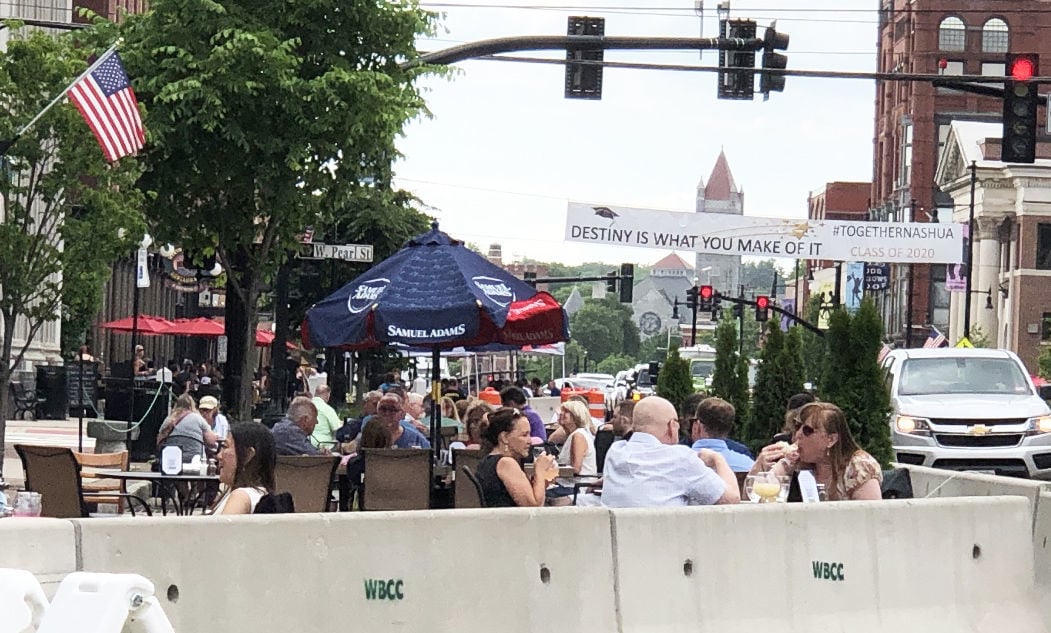 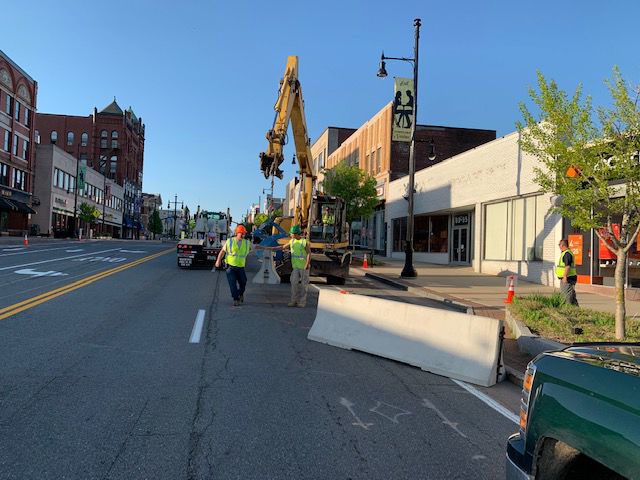 Three weeks after Nashua’s Main Street was narrowed to allow for expanded outdoor dining, city officials say the conversion should be considered every summer.

“To me, it has been a major success,” said Mayor Jim Donchess.

Starting on May 22, Main Street was reduced from four lanes to two lanes — one in each direction. The change allowed restaurants to use a portion of Main Street for outdoor dining until Nov. 15.

“We need to consider whether this is something we do every season,” said Donchess, stressing that the downtown is a significant part of the city’s economy.

With the street conversion in place for about three weeks, he said the downtown area is alive and active, and the change has improved the character of Main Street.

“I think it creates a totally different atmosphere for the downtown — much more festive,” he said of the numerous dining umbrellas and other outside decor.

The plan to expand outdoor dining on Main Street was adopted unanimously by the Nashua Board of Aldermen, and is intended to benefit restaurants such as The Peddler’s Daughter, San Francisco Kitchen, Fratello’s Italian Grille, MT’s Local Kitchen and Wine Bar, Surf Restaurant, Joannes Kitchen, Main Street Gyro and more.

However, other establishments along Main Street say they are benefiting from the change.

Since outdoor dining was implemented, Skelley said downtown is bustling.

“We have our store in operation now and the door is open,” said Skelley. “We are located right in front of Martha’s (Exchange), and they have been filled since this started. It is really refreshing to see this.”

She acknowledged that there have been complaints about the temporary layout since some parking spots have been eliminated.

“I want to see our downtown succeed, and I think this could be a good thing,” Skelley said of the mayor’s suggestion to consider the change every summer. “I would definitely support it,” added Skelley, a member of Nashua’s Downtown Improvement Committee.

For the past several weeks, Gov. Chris Sununu has only permitted outdoor dining at New Hampshire restaurants, as well as curbside pickup and takeout options because of the COVID-19 pandemic.

Even with indoor dining back in place next week, at least at half capacity, the narrowed Main Street will continue for now.

Donchess said there is a major economic opportunity in downtown Nashua. During typical times, Main Street is often congested with traffic and not pedestrian friendly, he said.

Now, with tables lined throughout the downtown and diners flocking to local establishments to eat, the atmosphere has improved the climate, he said.

The narrowing of Main Street is an idea that has been floated in the past, and this experiment will provide some insight into whether it could be pursued as a more permanent option, Alderman Erneste Jette said recently.

“This plan gives (restaurants) an area outdoors where they can serve their patrons. I think it is a good idea,” he added.

Our Gourmet: Getting outside for a gyro on Main Street in Nashua

IT PROBABLY WON’T offset the nearly three months of losses caused by the COVID-19 shutdown, but the city of Nashua’s decision to narrow Main S…