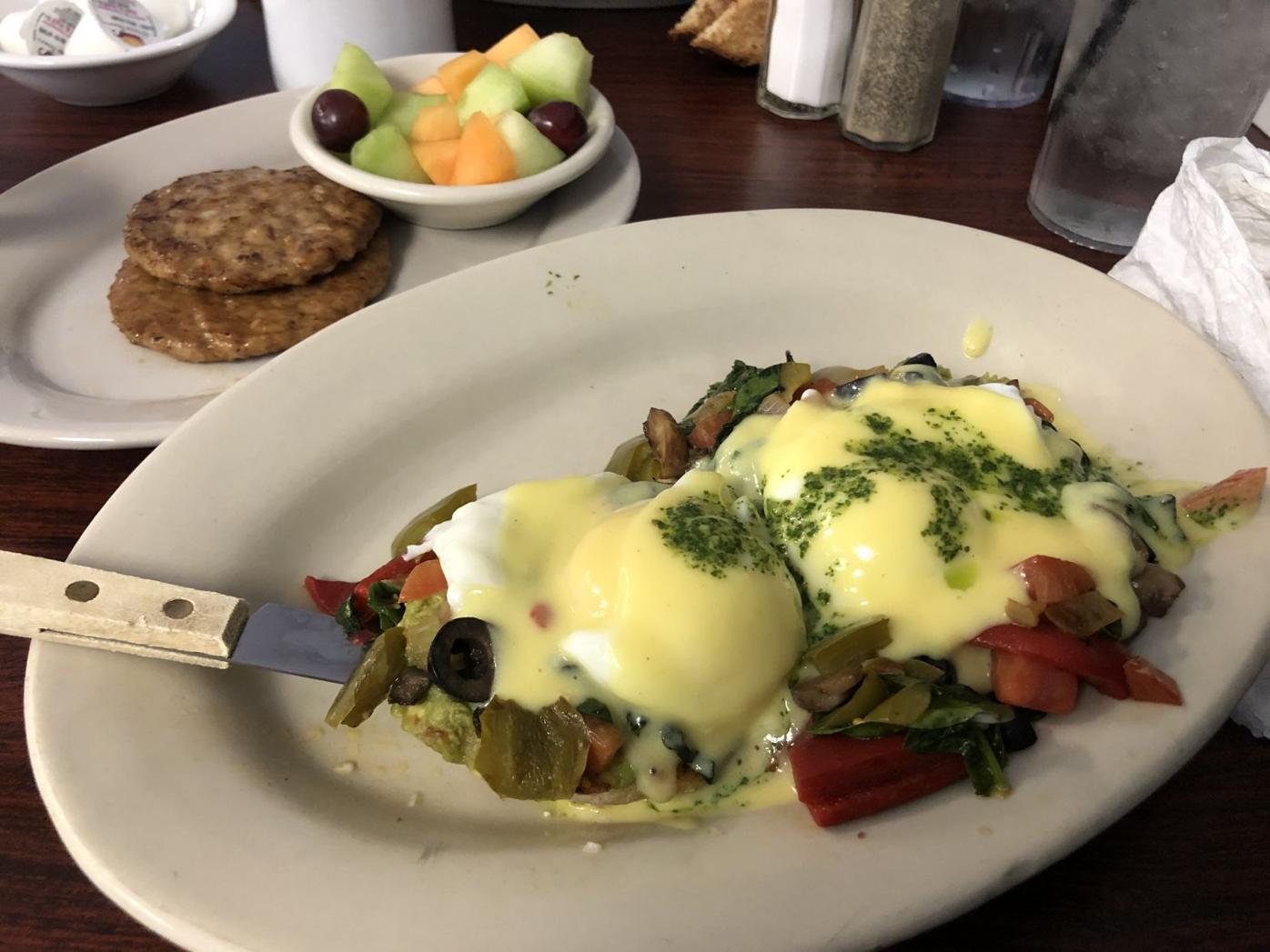 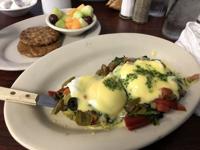 The Garden Benny at the Purple Finch Cafe. 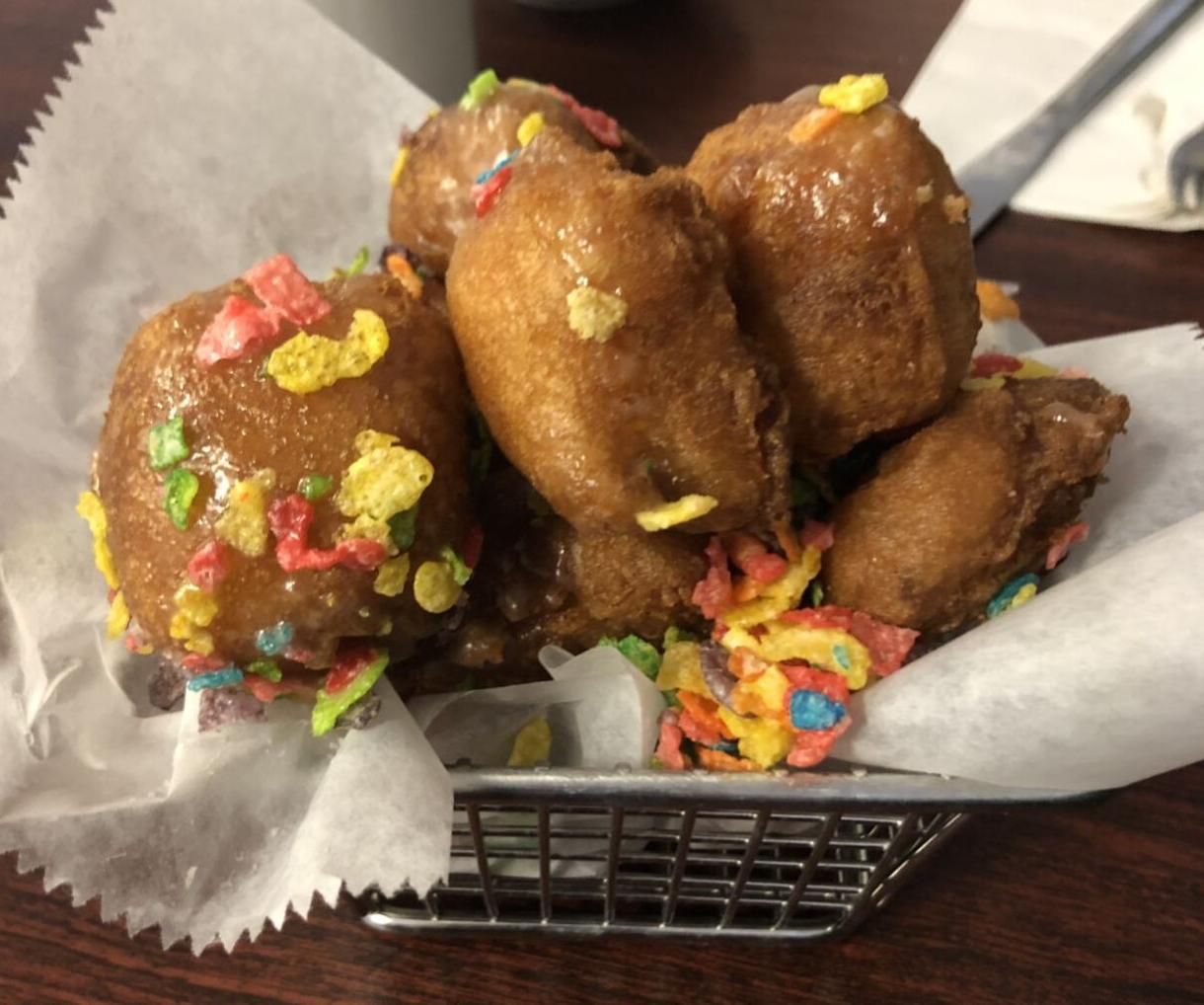 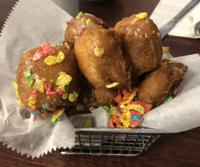 The Garden Benny at the Purple Finch Cafe.

THE PURPLE FINCH CAFE is named after the tiny songbird Roger Tory Peterson described as a “sparrow dipped in raspberry juice.”

Cafe owner Nicole Leavett probably appreciates that kind of whimsy. She likes to sprinkle Fruity Pebbles in her pancakes.

Leavett became owner of the Purple Finch in July 2020 after serving as executive chef at the Bedford breakfast-and-lunch spot for three years.

Her resume includes several years cooking at Ignite in downtown Manchester and its sister restaurant, Hooked, as well as managing the kitchen at a Mexican restaurant in Los Angeles that championed farm-to-table ingredients.

“I came into The Purple Finch with a very small amount of experience in the breakfast world,” the New Hampshire native says in her LinkedIn profile. “Unsure of how this would suit my culinary career, I was curious to see what breakfast showcased in our ever-growing industry.”

Our Gourmet previously visited the Purple Finch a couple of times to dine with a business contact long before the pandemic temporarily suspended such meetings.

Both times I chose the Egg White D’Lite ($12) because I loved it so much the first time. It’s three egg whites rescued from the bland-but-good-for-you zone by seared sliced tomatoes, marinated portobello mushroom, Swiss cheese and basil pesto. It arrives in a cast-iron skillet — the kind of sizzle that says “eat this because it will taste delicious, not because it leaves out the cholesterol.”

My Lovely Dining Companion accompanied me for a recent return trip. The cafe was packed on that Sunday morning so we had a 20-minute wait, but hardly an inconvenience on a warm spring day where we could sit outside until our table was ready.

Once inside, we were seated not far from the row of barstools, an old-school diner touch in a restaurant that offers a fresh culinary approach to breakfast.

We each started with coffee and a Finch Mimosa ($12). The latter was served with fresh blueberries floating atop the orange juice and champagne.

For starters, we chose the BamBam Bites ($7), one of two items on the menu that feature the breakfast cereal the Flintstones made famous.

Diced pieces of the cafe’s fresh lemon bread are rolled in pancake batter, deep fried, rolled into Fruity Pebbles and then glazed.

We each ate three of these warm balls of fried goodness — dipping them in maple syrup for an even more intense sugar rush — before begging our waitress for a box so we could take the rest of the baker’s dozen home. We split No. 13 before we closed the lid.

Fruity Pebbles also plays a starring role in the BamBam Board, ($27). The cereal is baked into eight Belgium waffle triangles and also crushed on top of a mound that includes sliced strawberries, maple syrup, chocolate sauce, powdered sugar and whipped butter.

It comes with two strips of bacon and two sausage links so we’re guessing most humans will want to split this one.

Our BamBam Bites satisfied our sugar craving so we opted for savory entrees. I chose the Garden Benny ($12), a vegetarian version of the traditional eggs Benedict.

I wasn’t sure exactly what I was going to get: “Two poached eggs over a colorful & tasteful mix of everything from our garden to your plate.”

That included spinach, avocado, tomato, red and green bell pepper, onion and mushroom with hollandaise sauce and basil pesto over English muffin slices. It was a satisfying mix of flavors, colors and textures. I chose fresh fruit rather than hash browns and added a side of two sausage patties ($3).

My dining companion chose a Be Your Own Chef egg scramble ($12.50), choosing spinach, tomato, cheddar cheese and onion as her toppings. She found the result a bit dry, with the spinach playing a bigger role than the cheese.

That meant she was dipping her wheat toast in my egg yolks, for which she paid me from her side of bacon ($3). Her usual breakfast go-to is usually two eggs over easy, but this time out she wanted to be a bit more adventurous.

I see a giant stack of waffles baked with Fruity Pebbles in her future. Bring us a couple of forks, please.