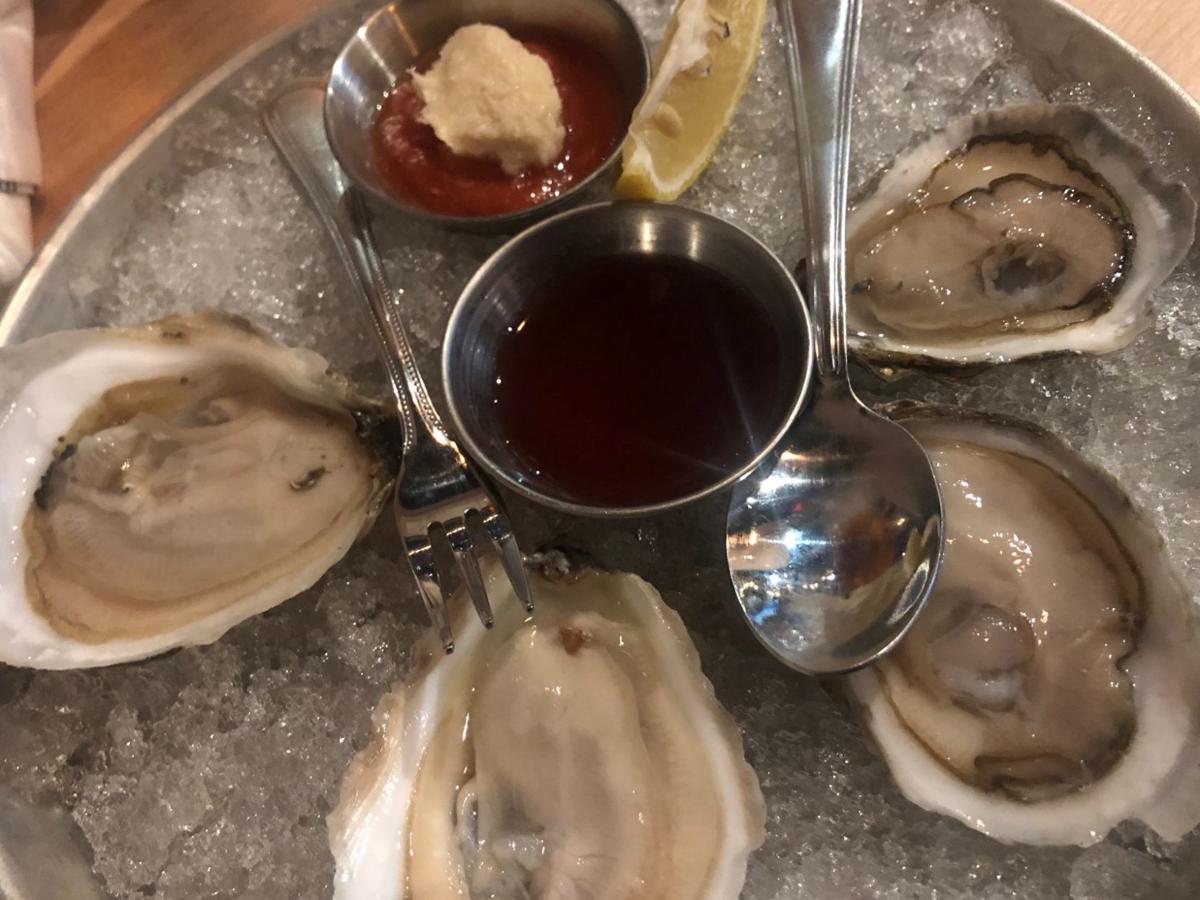 Conway Pearls from Prince Edward Island and Pemaquids from Damariscotta, Maine, were on offer for a recent Happy Hour Buck-a-Shuck. 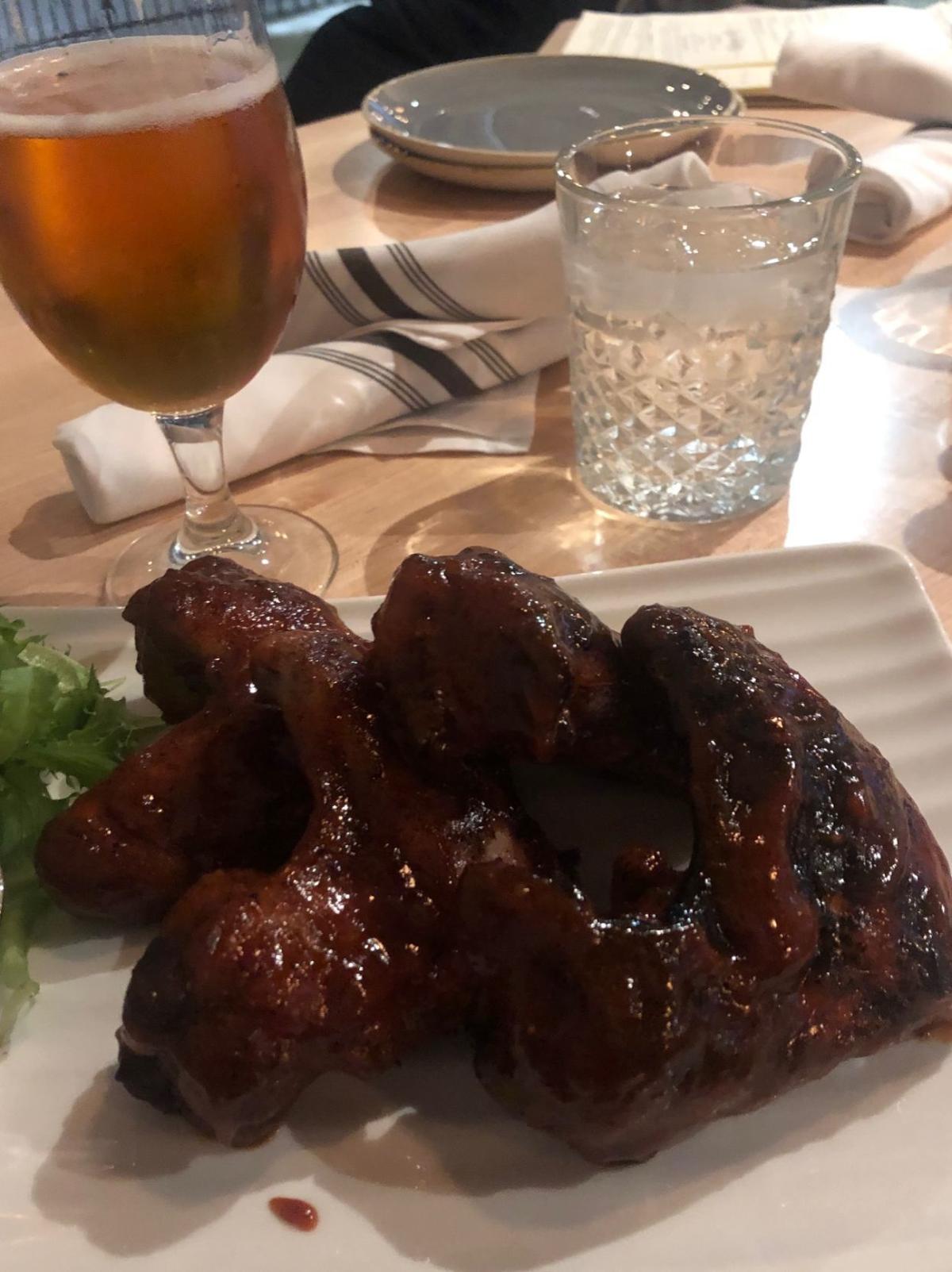 The chicken wings, tossed in spicy barbecue sauce, were tender, juicy and large. 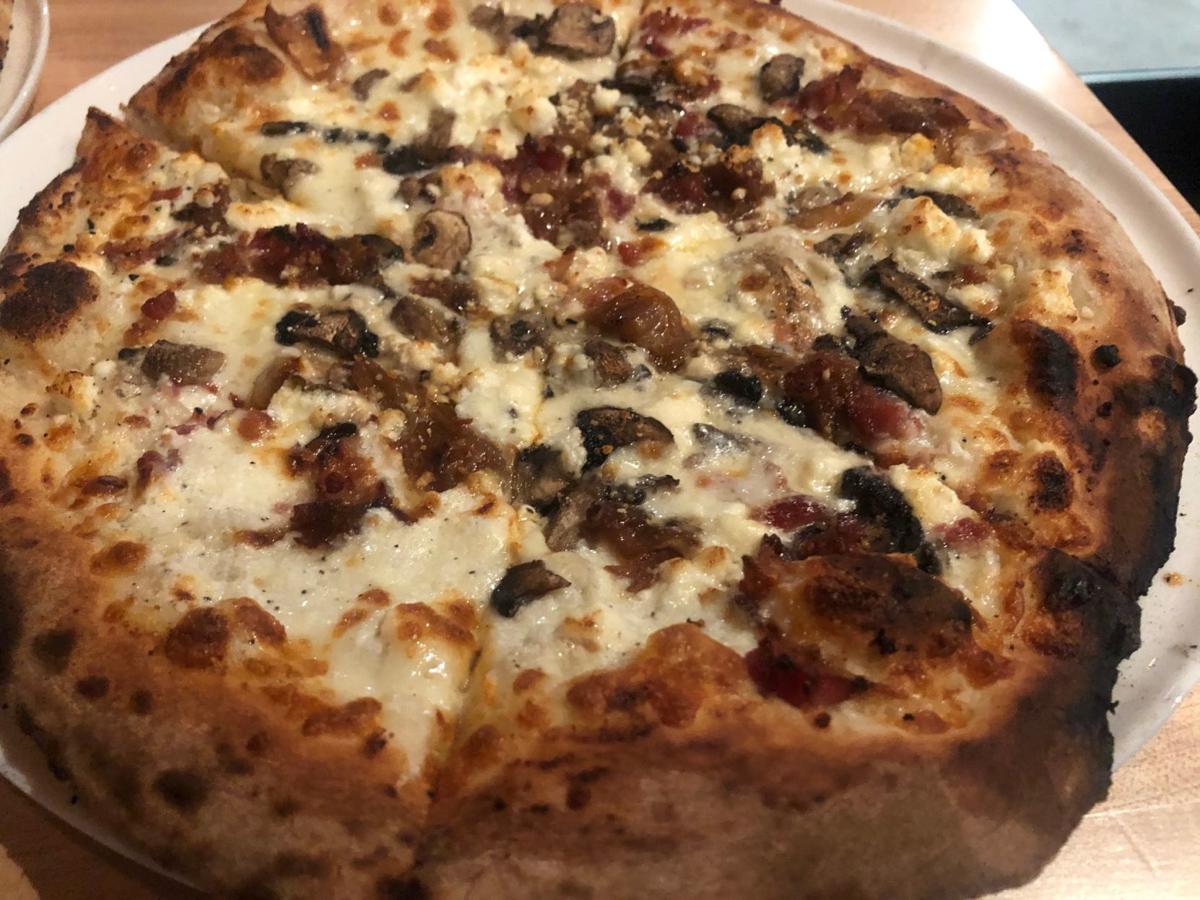 Conway Pearls from Prince Edward Island and Pemaquids from Damariscotta, Maine, were on offer for a recent Happy Hour Buck-a-Shuck.

The chicken wings, tossed in spicy barbecue sauce, were tender, juicy and large.

DOUGH CRAFT PIZZA opened in November. Our Gourmet and the Primary Dining Companion (PDC) first visited the space in 2018 when it was 900 Degrees, and it has the same hip decor — black iron and rustic wood chairs, a white marble bar dominated by three big-screen TVs and a sense of spaciousness and light.

When we arrived, the place was abuzz around the bar, but when we left more than an hour later, not a table was empty.

“People are having fun,” PDC said.

OG loves oysters, and was delighted to take advantage of the Happy Hour Buck-a-Shuck special. Two varieties were offered, Conway Pearls from Prince Edward Island and Pemaquids from Damariscotta, Maine. They arrived on a bed of ice with cocktail sauce and mignonette (a sauce of minced shallots, cracked pepper and vinegar).

The larger PEI Pearls were luscious and sweet, while the more petite Pemaquids tilted toward the salty side. Both varieties were slurp-worthy.

For an appetizer, PDC chose the chicken wings, tossed in spicy barbecue sauce and accompanied by blue cheese (or ranch) dressing ($13). The four wings were tender, juicy and large — eight pieces when broken in two, and the PDC was soon licking his fingers and asking for extra napkins.

The wings are described on the menu as “Signature Thirsty Moose Wings,” and that’s because Dough founder Joe Kelley owns five Thirsty Moose Taphouses (in Portsmouth, Dover, Exeter, Merrimack and Manchester, as our server proudly told us). Kelley also founded the popular Joe’s New York Pizza, which has two locations in Portsmouth.

Thirsty Moose is known for its beer selection, and it has a number of local brews on tap. OG couldn’t resist Liar’s Bench Love Duck, a pale ale ($7.75) with fruity overtones. Liar’s Bench is in a former plumbing supply warehouse in Portsmouth, and will always hold a claim to OG’s heart for being the site of a beloved daughter’s wedding after-party.

PDC was in the mood for Peroni, but our server returned to tell us there was none. A Budweiser ($5) was ordered, but by the time PDC finished that, a case of Peroni had been unearthed and chilled, thanks to the dedicated efforts of Dough staff.

We savored our beer and leafed through the menu, presented on a clipboard. This required a lot of flipping back and forth of pages, and OG was grateful to have visited Dough’s website in advance to survey the offerings.

To clear our palates for pizza, we decided a salad was in order (there are 13 to choose from). The BLT Chop ($11) sounded promising: Romaine, bacon, cherry tomatoes, feta, corn and croutons. It was served with balsamic dressing; there are 11 other dressings on offer. The heap of greens was garnished with three perfect avocado slices and studded with bacon. The croutons gave it just the right amount of crunch. We made short work of it.

We lucked out in that it was a Tuesday, when Dough offers its buy-one-get-one-half-off pizza deal.

The pies are 12 inches, and baked in a gas-fired brick oven, according to our server. It is possible to custom-order, but the profusion of choices (separate lists for the crust — traditional, cauliflower and gluten-free vegan — as well as sauces, meats, vegetables and cheeses) was too much for OG, who gravitated to the simpler “Specialty” list of 11 pizzas.

PDC immediately selected the Masarati, white cream base with bacon, caramelized onion, sauteed onions and goat cheese ($15). OG adores olives, so the Dixie — tapenade base with mozzarella, spicy capicola, salami and prosciutto ($14) was the natural choice.

When the pizzas arrived, PDC dug into his Masarati, only to recoil in outrage at the taste of goat cheese. OG gently reminded him that the ingredient list specified goat cheese, and he recovered enough to take a piece of the Dixie.

“Perfect,” he pronounced, and dedicated himself to polishing it off.

The Dixie’s base of tapenade (a spread made with black olives, capers and anchovies) created a piquant base line to the mozzarella and meat. OG is a fan of goat cheese, and so had no difficulty taking the Masarati for a spin. In short, everyone at the table was happy.

One of the advantages of Dough’s Portsmouth Green location off Route 1 is plenty of free parking.

And it’s a great place to have a pizza party and catch a game.