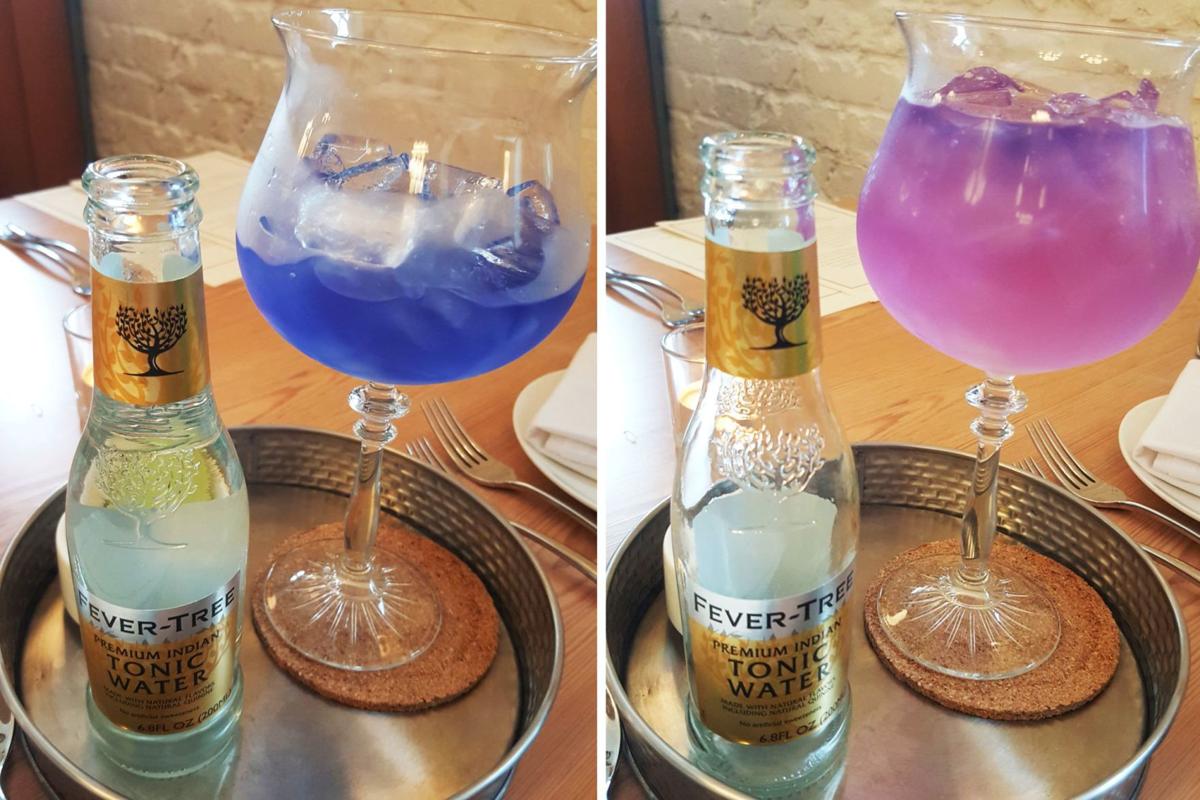 Empress G&T at Botanica in Portsmouth comes with a “surprise” — a color change when the Fever Tree tonic water is introduced to the Indigo Gin. 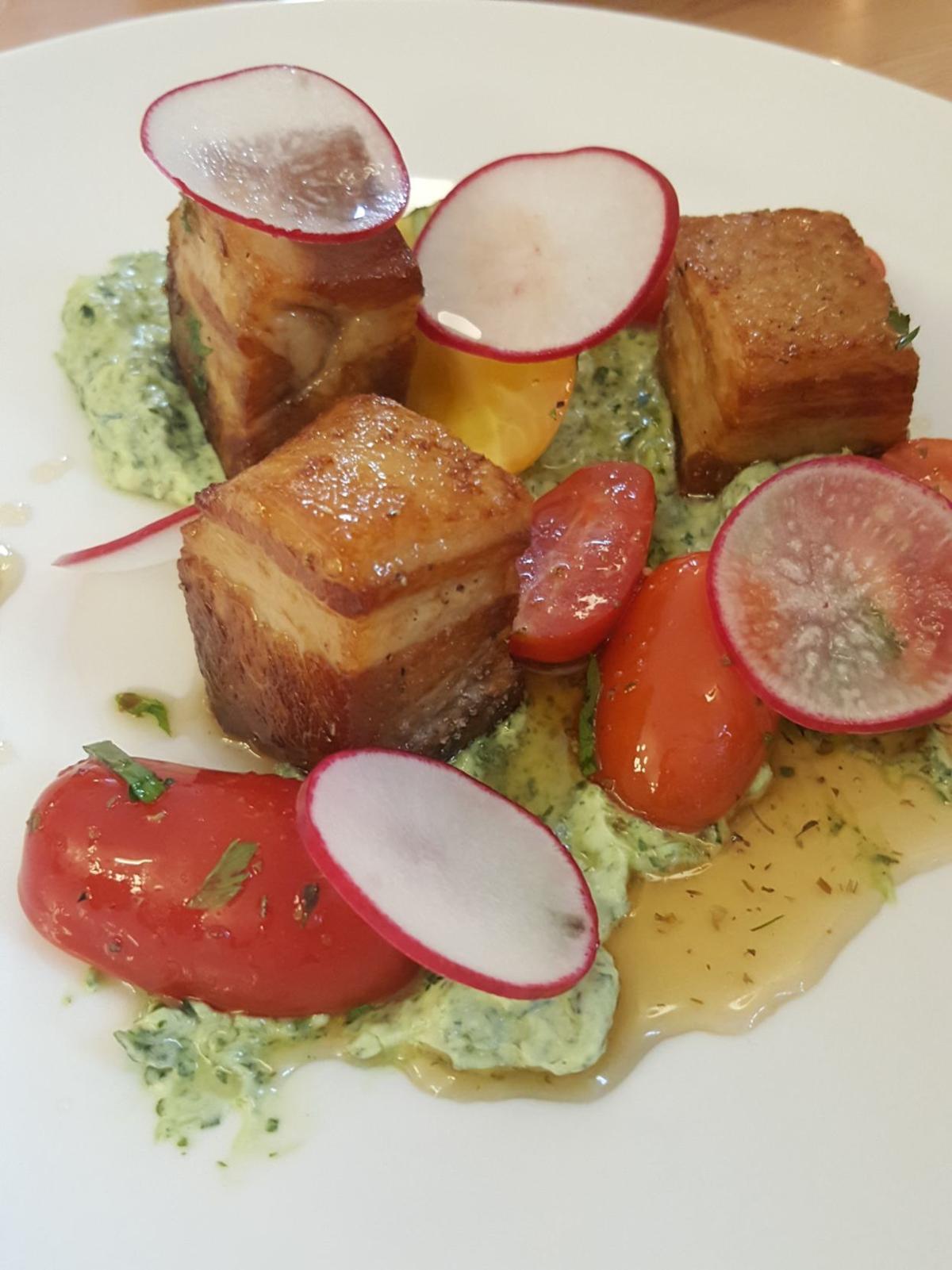 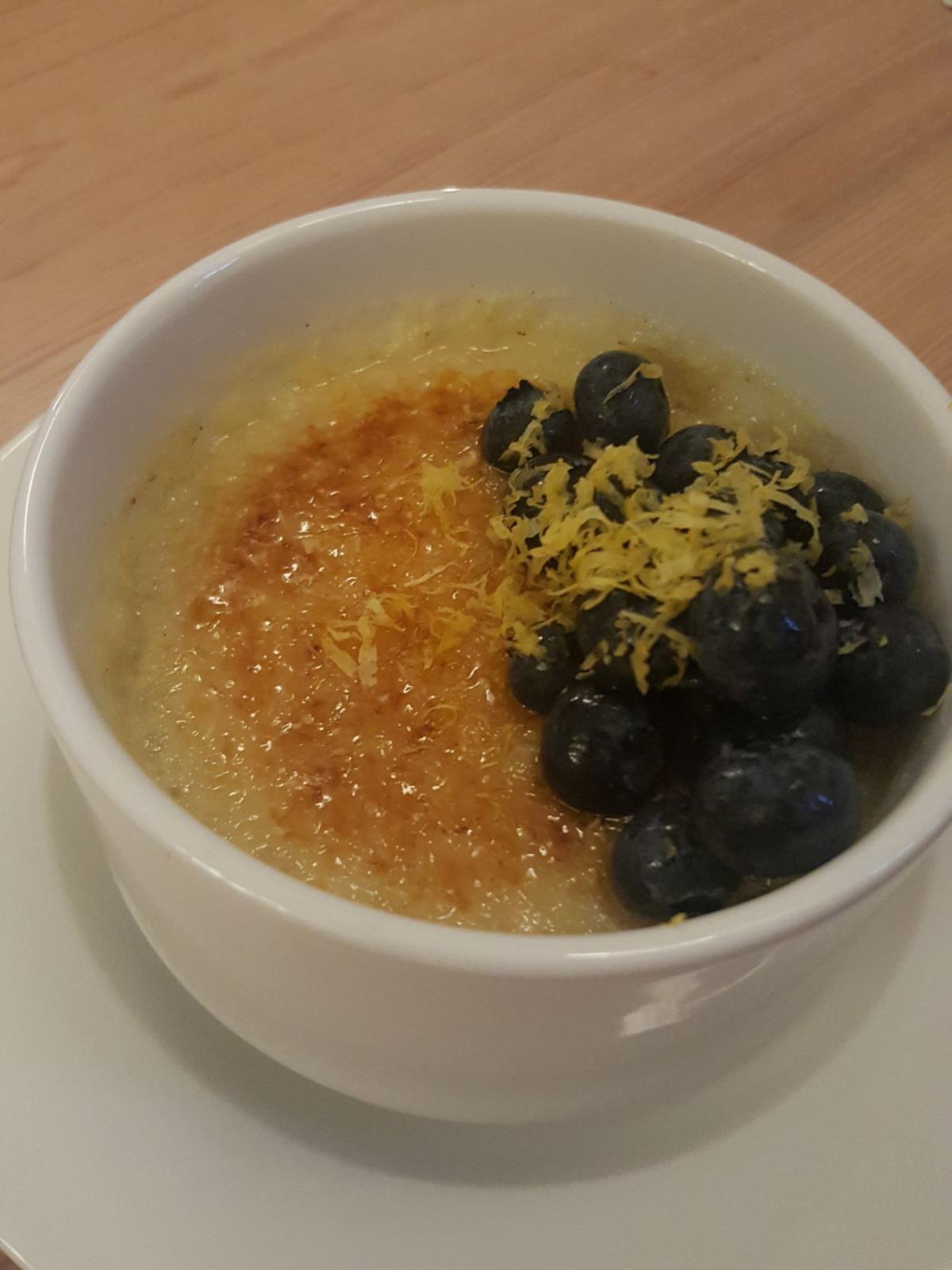 Cardamom Creme Brulee with Blueberries and Lemon Zest, $8, seems like a simple dessert but has complex flavors. 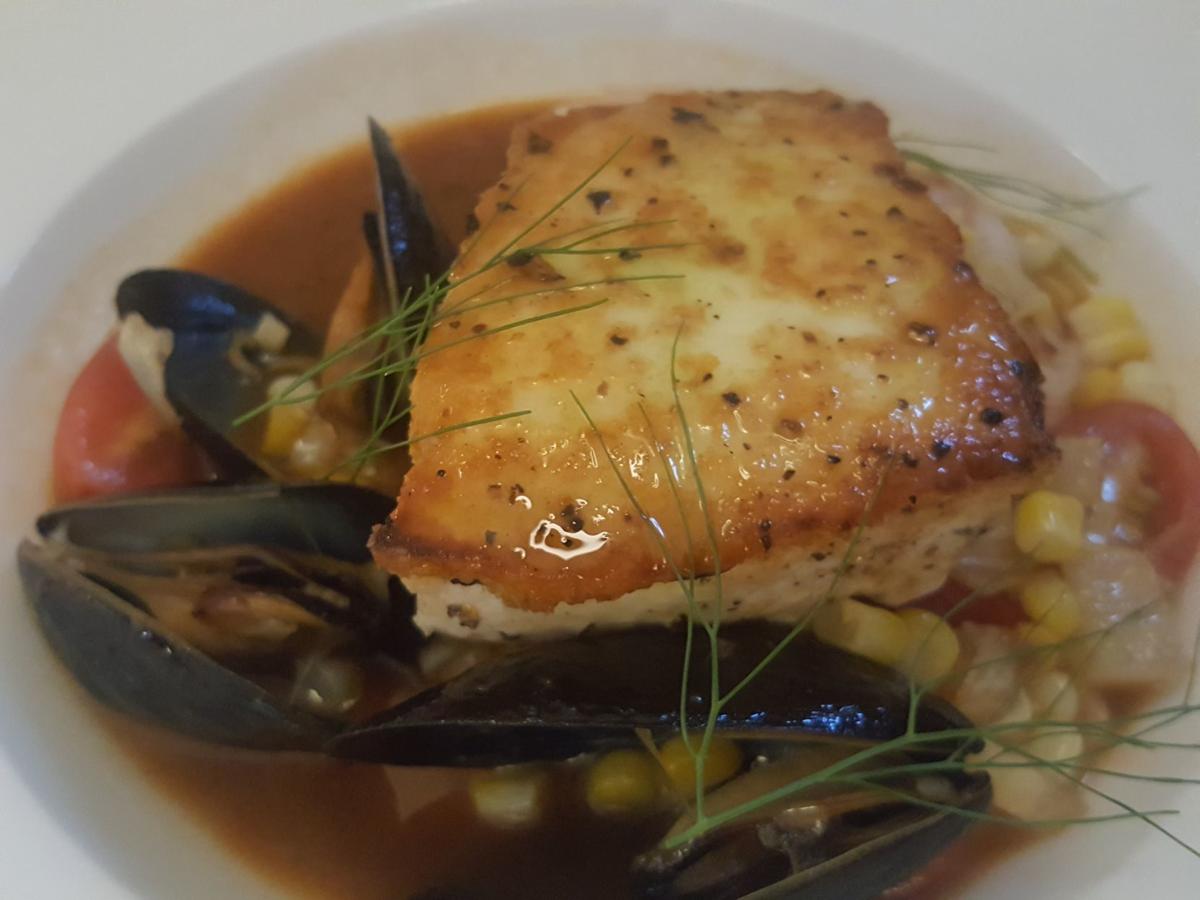 The Bouillabaisse of Halibut with Mussels and Shrimp on Potato Pave ($27) came in a bowl of savory broth.

Dinner and a show. That’s how Our Gourmet started a delicious night out at the Botanica Restaurant and Gin Bar in the Frank Jones Brew Yard.

Dining Companion 1 ordered the theatrical Empress G&T ($14), which features Indigo Gin and arrives on a small tray with a large glass and Fever Tree Tonic. The gin is a beautiful shade of indigo, and the “surprise” cited in the drinks menu came when DC1 added the tonic. Voila! A magical color transformation.

There are eight other signature gin cocktails ($11-$13) and vodka, tequila, whiskey and rum “originals” ($12). Local beers ($7), Guinness ($6) and an ale ($8) round out the choices, as well as a respectable selection of French-inspired wines available by the glass.

The bar was a popular spot, with patrons supplementing their liquid nourishment with “Accompaniments” that included Pomme Dauphine with Salmon Roe and Basil Aioli ($8).

The deep-fried potato puffs were light, and crowned with salmon roe. But it was the aioli, oh the aioli, that made the dish.

This would prove to be the theme for the night — every sauce with every dish was to die for.

Or as Dining Companion 2 said, “without the sauce, it’s fried potatoes.”

The Crispy Pork Belly with Cherry Tomatoes, Persillade and Radish appetizer ($10) was elevated by the Persillade, a sauce of olive oil, garlic and parsley that made us want to ask for a hunk of baguette to soak up what was left in the bowl.

The Sauce Bigarade on the duck meatballs with zucchini and spinach ($13) gave a sweet and sour high note to the savory duck.

The veggies in every dish were super fresh, and cooked perfectly.

For entrees, OG chose the Bouillabaisse of Halibut with Mussels and Shrimp on Potato Pave ($27). A generous square of grilled halibut sat atop a bed of potatoes (think high-end scalloped potatoes), which imparted gravitas to the salty fish. The dish was bedecked with a golden crescent of corn cut from the cob.The two large shrimp were sweet, the three mussels smoky and the broth piquant. (Also worthy of being sopped up with a baguette.)

DC1 approved. She has visited Botanica before and spoke highly of the Steak Frites ($28) and Duck Confit with French Gnocchi, Leeks and Red Wine Jus ($25).

DC2 had the Grilled Lamb Noisette “Navarin” with Sunchoke Fennel, Kalamata Olive and Crispy Onions ($28). The lamb was medium-rare (“just right” said DC2, who sang a bar of “Stand By Your Lamb”).

The vegetarian option was Parmesan Risotto with Confit Tomatoes, Peas and Saffron ($20).

The three of us at the table agreed that we liked the simplicity of a menu with six entrees. There is plenty more available — six appetizer choices and six snack-y “accompaniments,” as well as three local cheeses.

The decor is low-key and intimate, as befits a bistro-style eatery — a white brick front wall, tones of charcoal and caramel in the booths and comfy blond wood chairs at the tables. There is outside seating as well, and the patio area was full on this pleasant late summer evening.

The interior space is small but the noise level remained within acceptable levels.

Our table did get a bit boisterous when the desserts arrived. We had pre-ordered the Enna Chocolate Souffle with Vanilla Creme Anglaise ($10) because of its 25-minute cooking time.

Our server — knowledgeable and unassuming throughout the meal — advised us to pierce the center of the souffle and pour in the Creme Anglaise, which was in a small pitcher. This light custard was so yummy that we could have made a meal of it alone.

DC2 was going to skip the second dessert (Cardamom Creme Brulee with Blueberries and Lemon Zest, $8), but as soon as her spoon broke the caramelized crust, we had to wrestle it away from her.

Botanica is not pretentious, but it is a bit pricey — our tab was $168.95 before tip. Still we had three appetizers, three entrees, two desserts and alcohol, and the restaurant is in line with the Portsmouth fine-dining price point.

It has plenty of free parking, something worth mentioning in Portsmouth.

There is a sister restaurant in Newmarket: The Joinery, at 55 Main St., describes itself as “locally sourced and Southern influenced.”

Our Gourmet reviewed this eatery some years back, but it might be worth a return visit. The Botanica certainly is.