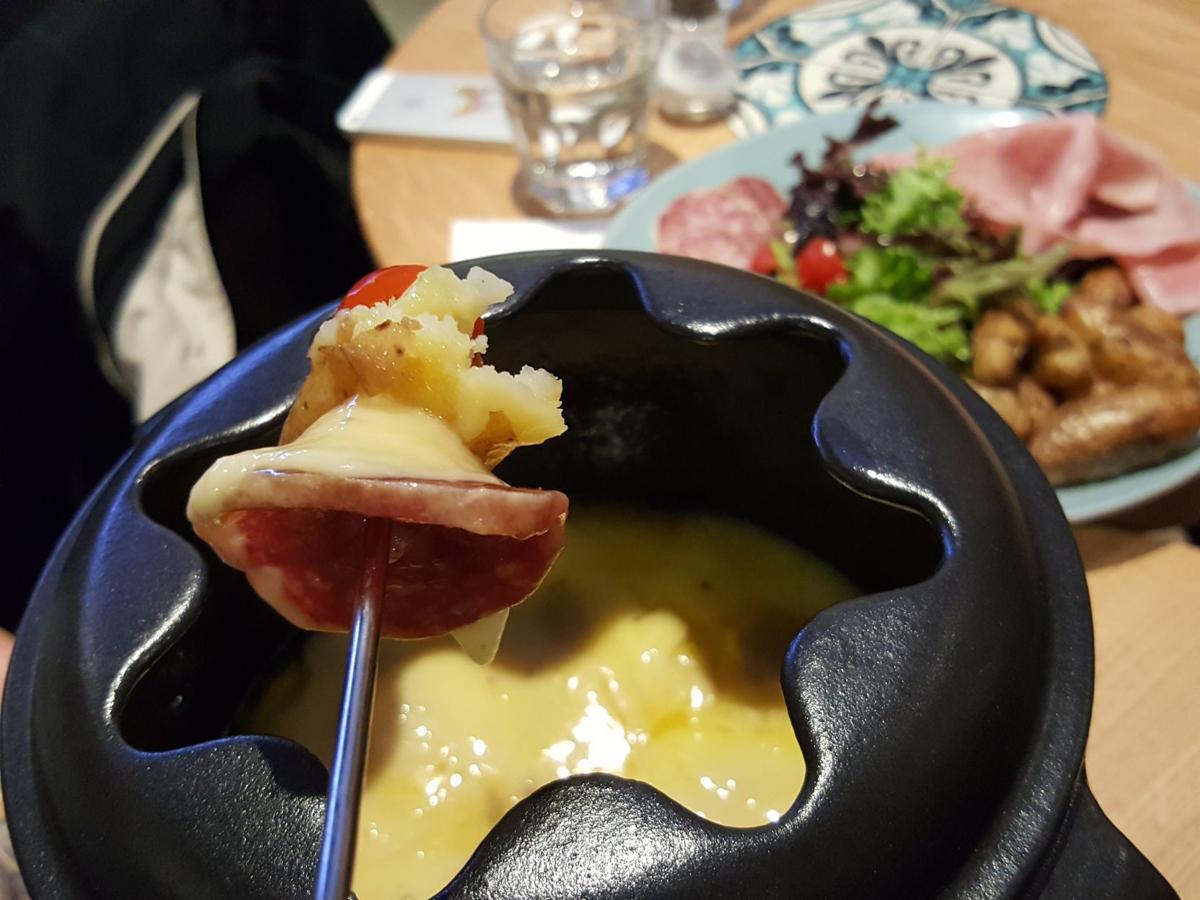 Four French cheeses are melted together for Fondue Savoyarde, served in a Sterno-fired cauldron. 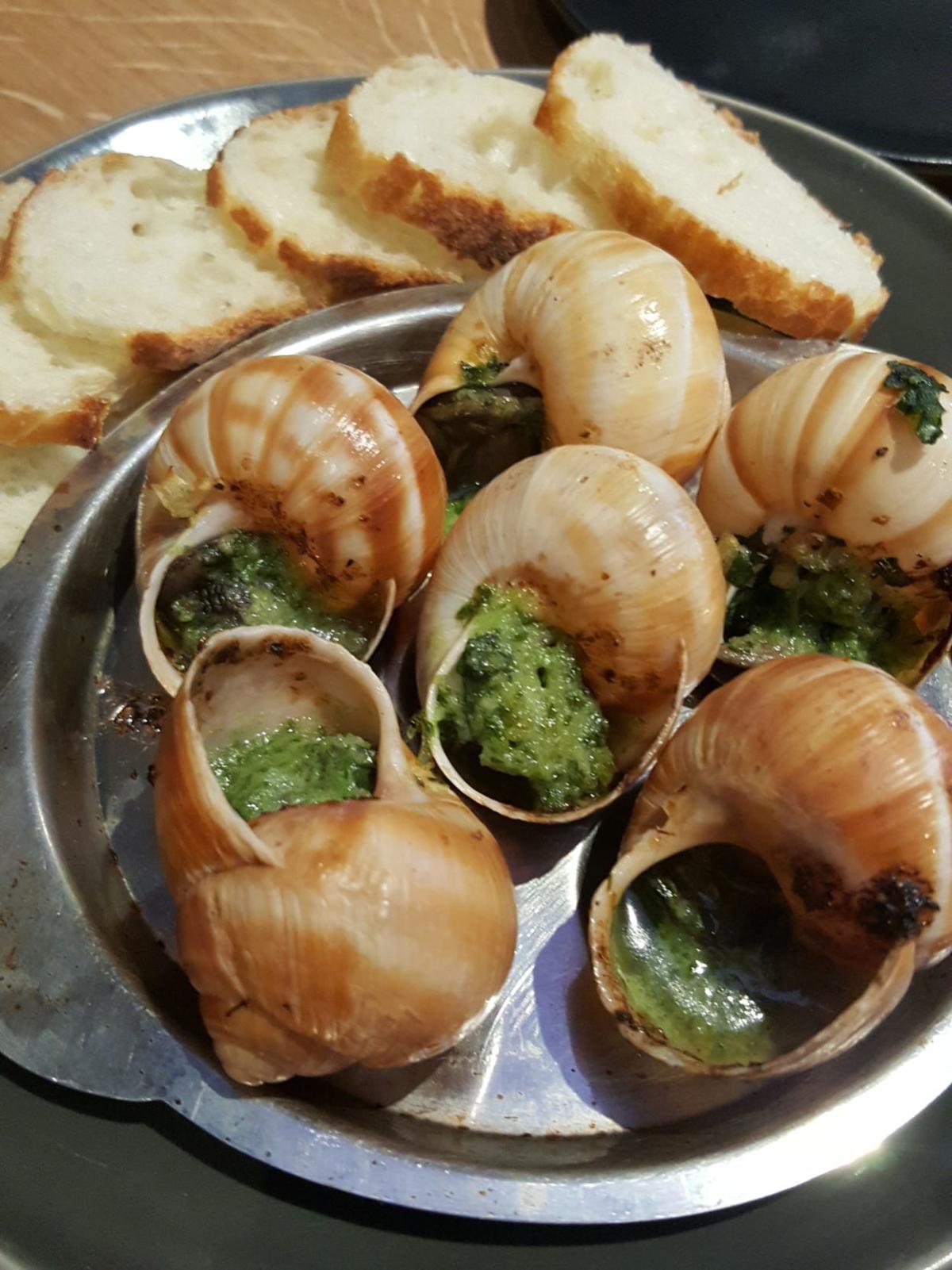 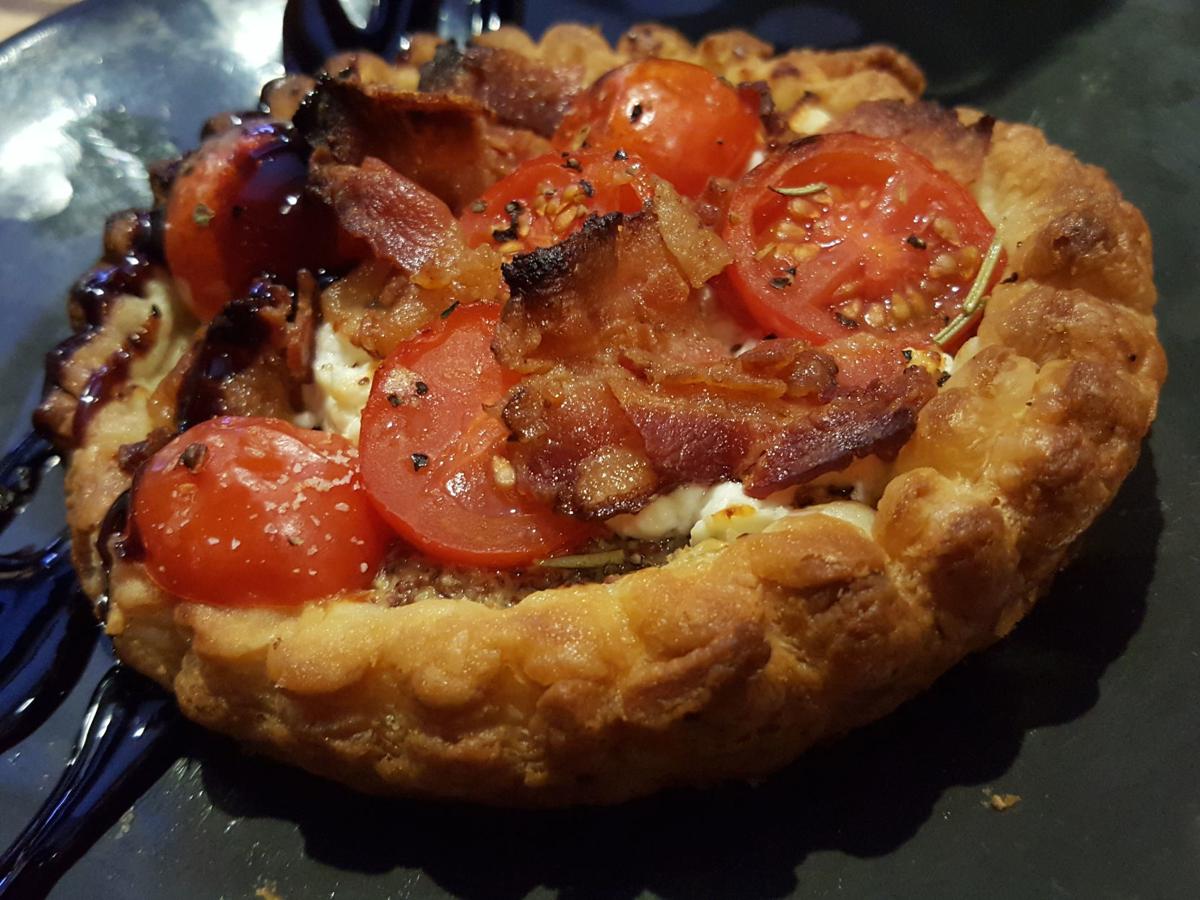 The Tarte Tomate is not unlike a BLT on steroids. 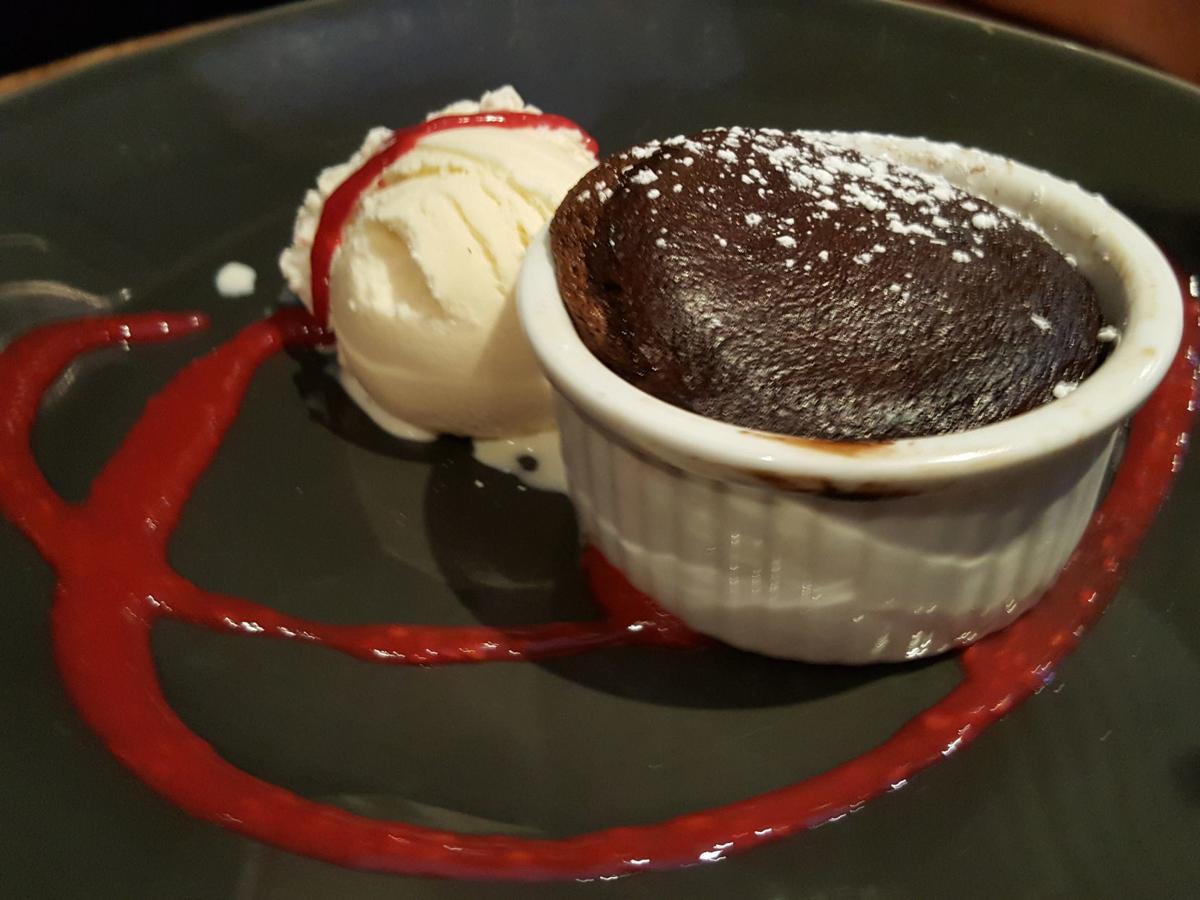 Souffle au Chocolat is surrounded by a raspberry drizzle.

Four French cheeses are melted together for Fondue Savoyarde, served in a Sterno-fired cauldron.

The Tarte Tomate is not unlike a BLT on steroids.

Souffle au Chocolat is surrounded by a raspberry drizzle.

OUR GOURMET has ventured to La Maison Navarre in Portsmouth before, and enjoyed numerous delicious pastries and happy hours (4-6 p.m.) with charcuterie boards, $1 escargot and wine specials, but this was different. This was fondue night.

Fondue comes from the French word, “to melt” and was first used in 1878, with the literal meaning of “cheese pudding.” The idea is to dip pieces of bread and meat and vegetables in melted cheese served bubbling hot in a pot warmed by Sterno. Fondue was wildly popular in the U.S. in the 1960s and 1970s, and is being revived in a thoroughly updated way at the upstairs wine bar of Cafe Navarre.

The Delightful Dining Companion (DDC) instigated this adventure, inspired by 1970s childhood treks from her home in Goffstown to the fondue-serving Puddledock Pub in Portsmouth (now the site of a hair salon).

“It’s all coming back to me,” DDC said as our cauldron of four cheeses arrived. They included Emmental (from the French Alps), Comte (described as fruity), Cantal (dating back to ancient times) and Reblochon, a semi-soft cheese.

Fondue forks are delicate things, designed to spear the bread, meat or veggies being dipped. A subtle wrist rotation is required to make the coating complete, and the cheese-drenched delectable is dropped onto a plate to cool a bit.

Do not plan to talk while chewing a giant mouthful of melted cheese, meat, fingerling potato and cherry tomato. Just close your eyes and think of France.

Our server was ebullient, even mischievous, and kept asking: Are you living your best life?

We washed all this down with Aguila Rosé Brut, a delightful sparkling wine ($14 a glass; $9 during happy hour).

DDC and OG optimistically started the evening with an order for the fondue as well as six escargot (garlic, butter, baguette — yum), a couple of entrees and a dessert.

But when we’d polished off the escargot and were presented with a board overflowing with meat, vegetables and salad, as well as a generous bowl of crispy cubed baguette and a large pot of melted cheese, we quickly realized the error of our order.

Believe me when I say that the fondue ($25 per person) is enough to fill up two people and take home a doggie bag.

Cheese is not the only option. The Fondue Bourguignonne is cubed beef served with three sauces — béarnaise, peppercorn and burgundy, along with roasted potatoes and a salad ($25 a person.)

Of the six entrees available, we had planned to order Parmentier de Canard ($19), made with mashed potatoes and celeriac (also known as celery root) combined with duck confit. OG is guessing this is tasty, especially the slow-cooked, melt-in-your mouth duck confit.

But instead we tried the Tarte Tomate and Chevre ($17). Puff pastry, tomatoes, bacon, arugula and Bucherondin cheese. The balsamic drizzle made the goat cheese pop, “Tart and rich at the same time,” said DDC.

The pastry was perfect, which you’d expect from a place owned by French natives who describe their restaurant as like being transported to the middle of Paris. The downstairs patisserie is chock full of freshly made macarons, tarts and mousse cake, among other delicacies.

For dessert, we chose the Soufflé au Chocolat ($12), which arrived piping hot in a ramekin, its creamy surface calling out to our waiting spoons.

Cafe Navarre serves a wide variety of breakfasts and its Saturday and Sunday brunches (9:30 a.m. to 3 p.m.) are very popular.

The fondue is part of the wine bar’s Fall Menu, so don’t delay.