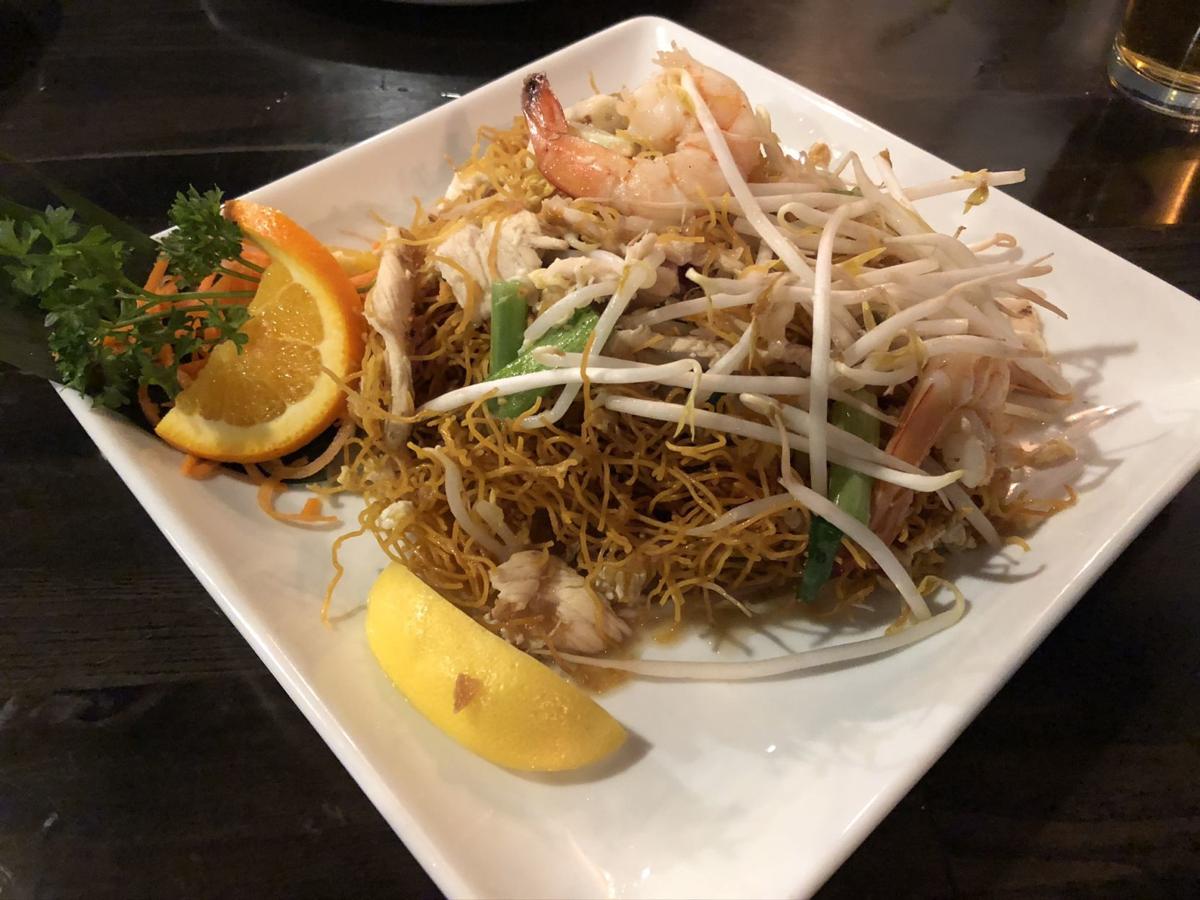 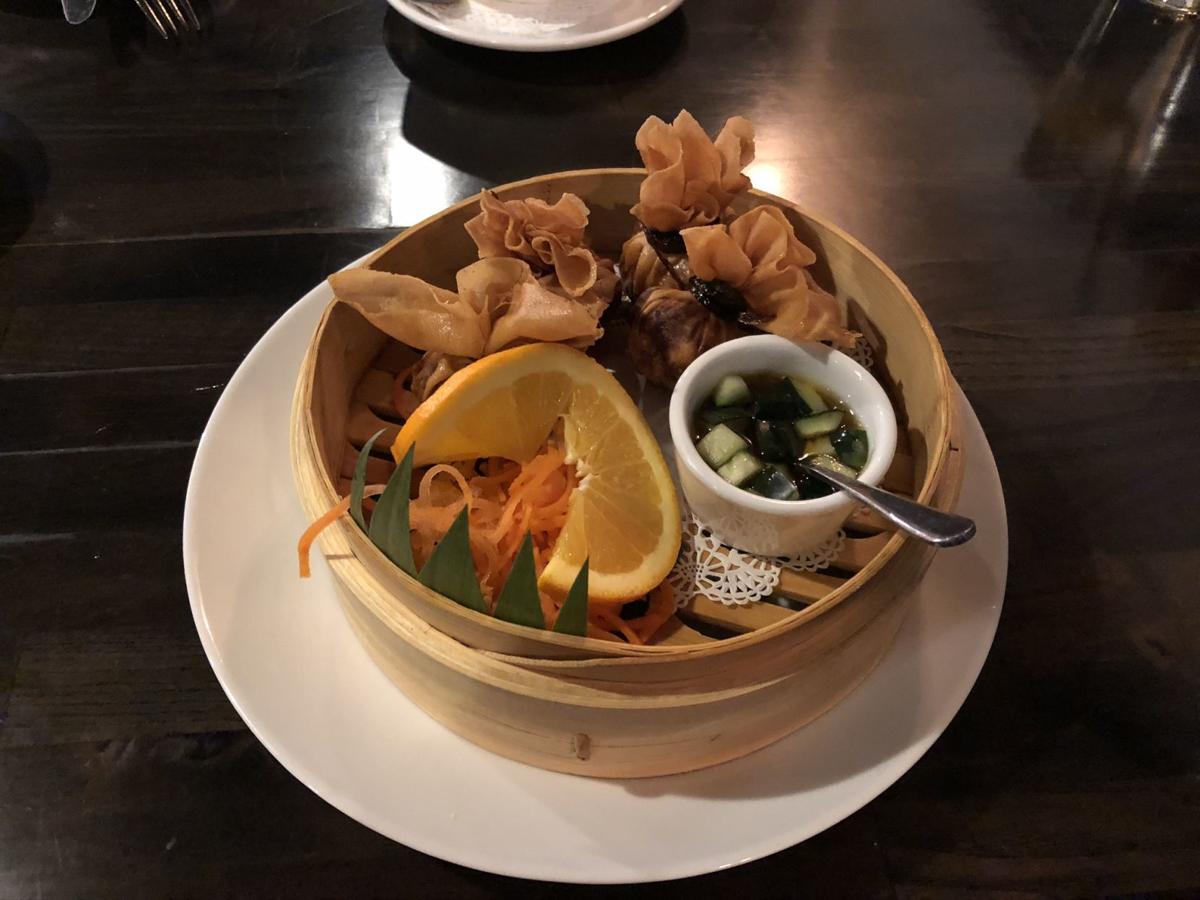 Golden Bags, served with a delicious cucumber plum sauce, is a popular appetizer at K’sone’s Thai in Nashua. 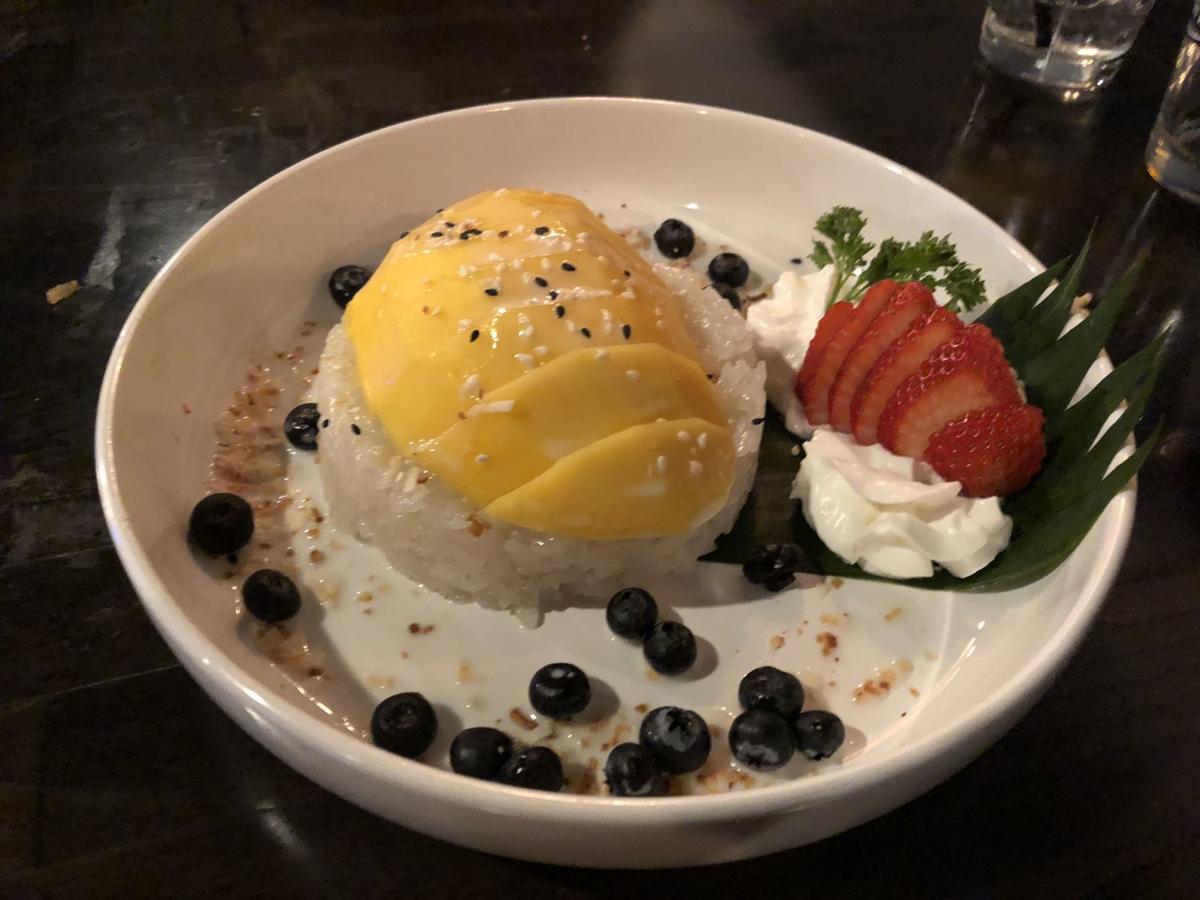 Mango sticky rice is the signature dessert at K’sone’s Thai in Nashua.

IT’S AMAZING what you can learn when you’re walking the dog.

I was making the rounds with my beasts the other day when I met up with a couple of our dog-walking friends. As we caught up on the latest neighborhood news, the talk turned to what we all were planning for Valentine’s Day dinners.

“Nothing,” I said, knowing that I would be getting home too late for dinner on Valentine’s night.

My friends expressed appropriate sympathy, and then said they would be going to a relatively new Thai restaurant nearby. They said friends of theirs, whom they called experts in Thai food, said the place was excellent and the food very authentic.

Hmmm, I thought. We might not be able to go for Valentine’s Day, but Mrs. Gourmet and I could certainly go the next night. When I told Mrs. G about the conversation, she was all in on the plan. A Valentine’s date and a review all in one stop!

K’sone’s Thai Dining & Lounge (pronounced kay-SONEs) occupies the corner spot in a recently renovated retail plaza near Nashua Community College. The space used to be a Chinese restaurant — one that Mrs. G and I visited a number of times over the years, but it got smokier and greasier as time went by, and we eventually stopped going.

So we were very happy to see that K’sone’s has done a complete remodel of the space. It’s now open and airy, with half walls breaking up the dining area. The decor is simple and cleanly contemporary, with a few potted plants and artwork featuring landscapes and scenes from Thailand.

The menu covers seven pages and includes appetizers, “extra mouth watering” appetizers, soups, salads, sides and kids’ selections, curries, vegetarian dishes and two pages of “Thai specials” and “house specials.” (I’m no expert, but I would have thought both pages of “specials” would have been classified as “Thai.”)

While we waited to be seated, we noticed a blackboard near the entrance that listed a half-dozen “most favorite dishes.” All six were appetizers, but it came in handy in narrowing the 20 or so apps on the menu to a manageable handful.

I chose one of those six, Golden Bags Thong Tong ($9). Despite the slightly inelegant name, this is a great dish. Four little pouches made from wonton wrappers tied up with a strand of lemongrass, were filled with a minced combination of pork, shrimp, water chestnuts, corn and delicately deep fried golden and slightly crunchy. They were great on their own, but the sweet, slightly spicy cucumber plum sauce served on the side made for great contrast.

Mrs. G started with Tom Yung Goong ($8), a Thai hot and sour soup. In a thinner broth than we’re familiar with from most of our Chinese restaurant experiences, this version was filled with mushrooms and shrimp, with a bit of a spice kick and a tang coming in part from the hard-to-discern presence of lime juice in the broth.

For her entree, she chose Pad-See-Ew ($16), a stir-fry of rice noodles, chicken (or beef, pork or shrimp), Chinese broccoli and egg in a glistening, slightly sweet sauce. It took us a while to recognize the noodles — we were expecting thin strands, but these were wide and flat, looking more like caramelized pieces of a roughly chopped onion.

It reminded us of the kind of stir-fry you might throw together at home (with an onion instead of those noodles). Mrs. G liked it well enough, but she really wished she had ordered what I chose. And I couldn’t blame her.

My Crispy Pad Thai ($17) was a fantastic dish, combining crispy fine egg noodles, bean sprouts, chicken slices, shrimp, scallions, egg and chopped peanuts in a sauce marrying soy, ginger and a hint of orange. The flavors and textures worked so well together that I had to force myself to stop before I finished the plate, knowing that we needed to check out the dessert menu.

There are only a couple of desserts available. We chose the house special, Mango Sticky Rice ($10). A half mango, sliced, sat atop a big cake of sweetened rice, with a touch of whipped cream on the side. This was the heaviest dish of the night; we split the serving and still didn’t finish it.

And it was a bit hard to handle with a spoon — it would be better if the mango were cut into chunks rather than thick slices.

Overall, we were pleased with the food and the atmosphere. Service was friendly and for the most part efficient, though we took off a couple of points in our score for letting our drinks run dry without an offer of refills or water.

One of the co-owners was handling a variety of chores during our visit, from delivering clean glassware to the bar to busing tables, but he made a point of stopping by to chat with each party — a nice touch that helps build connections and return visits.

And we probably will return. Maybe we’ll invite our dog-walking friends who tipped us off to K’sone’s in the first place. (The dogs can fend for themselves.)