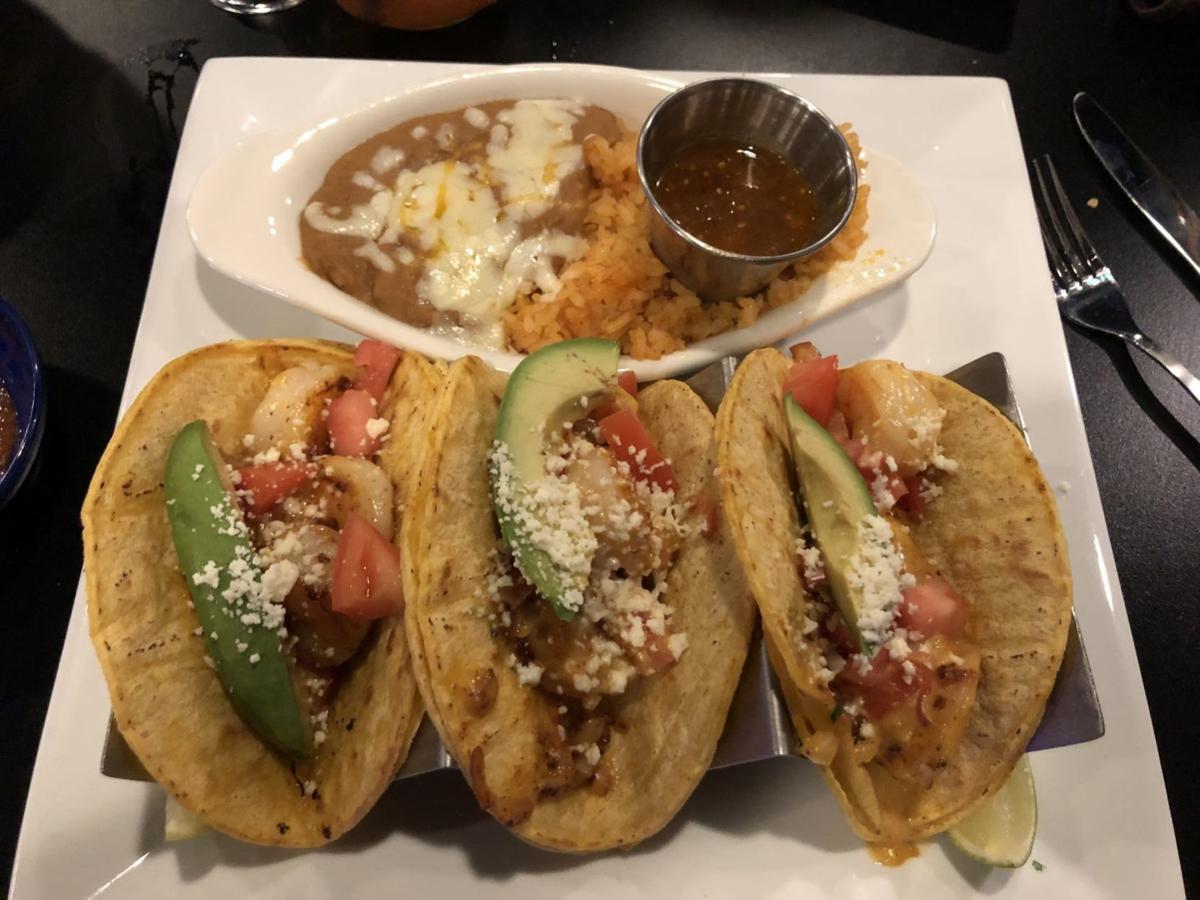 The Shrimp Tacos were surprisingly good. 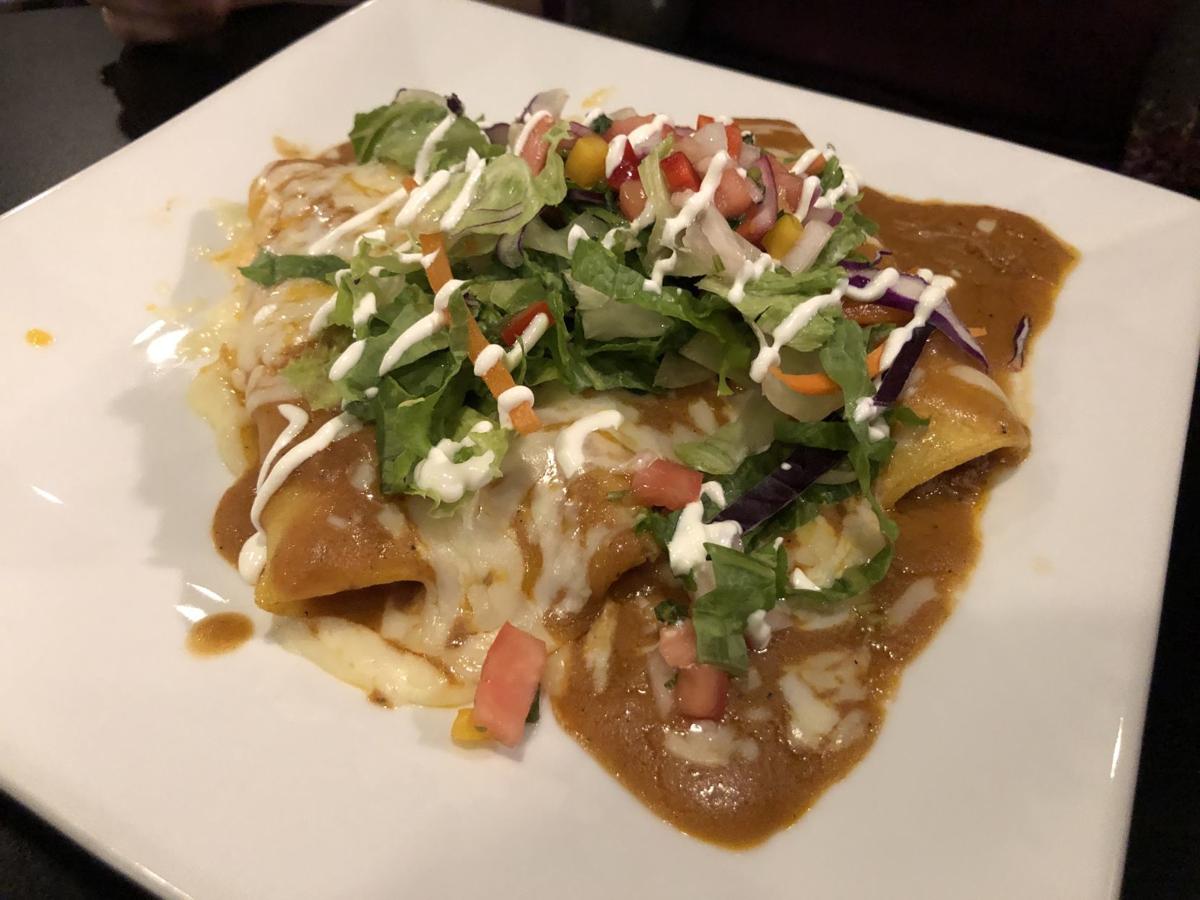 The Enchilada Supreme -- one ground beef, one shredded beef, one cheese, one chicken.

WITH THE ADDITION of Fridas Tacos and Tequila to 102 Elm St. in Manchester, Mexican fare is increasing its dominance downtown and beyond.

Fridas isn’t exactly downtown. Its location in the former home of Theo’s Pizza Restaurant on the southern end of Elm doesn’t quite qualify. But with Fridas’ arrival, the count for Mexican fare in the Elm Street area is up to three if you count El Rincon on Lake Avenue and Consuelo’s Tacqueria Restaurant on Amherst Street. (The others on Elm Street are Margaritas Mexican Restaurant and Lorena’s Cantina.)

Meanwhile, the demise of Theo’s means the loss of a second Greek family style restaurant in the area, after the closure some months back of Brothers Restaurant on Willow Street, which remains vacant.

On a recent Friday night, Fridas was enjoying moderate business — probably not the kind of numbers that can sustain a restaurant long-term but hopefully enough to help it build strong word of mouth for its wide selection of tequilas and a diverse menu that features traditional Mexican cuisine with a creative flare. (Translation: more variety in the sauces.)

The interior of the restaurant sports a Mexican theme with bright colors, but its center dining room remains the same as far as the design goes, with the bar in the back of the restaurant. Our Gourmet and his Lovely Dining Companion selected seating in the bar area on one of the high-top tables.

Now, as the OG aliases suggest, reviewing restaurants is something we do anonymously. That’s become easier in the selfie age, when no one pays much attention when you take out your smartphone to take pictures of your food, or in our case, the food and drink menus.

These days, most restaurants post their menus online, so it’s usually easy to enjoy the meal and ferret out some of the pricing details later if you forget to photograph the itemized menu when you leave.

That said, we could only find the food portion of the restaurant’s menu online. So this time around neither O.G. or his LDC can tell you the pricing on their margaritas, but we can note with certainty that hers was the choose-your-favorite tequila variety made with Patron and Contreau, and his was a blackberry and basil concoction that we can best describe as a cross between a margarita and a mojito. (We can comfortably say it was $13 or $14 and on the cheaper side of the margarita menu.)

We started with guacamole made tableside. That’s not quite accurate, however, because on the night we visited, one of the wheels on the tableside cart was broken so our server had to prepare it across the room from us. But we could still see her smashing avocados and adding fresh lime and other ingredients, including fresh sliced jalapenos on the side for OG. It was served on one of those lava-like bowls with more of the house-made tortillas we had already been snacking on with salsa since our arrival.

We were further distracted from our mission by another couple we befriended that night. When the Mrs. of the couple inquired about the quality of that table side guac, we invited her over, and soon she was dipping chips and checking it for herself. She enjoyed it as much as we did.

Now back to our mission. For her entree, LDC chose the Enchilada Supreme ($14), a quartet of one chicken, one ground beef, one shredded beef and one cheese enchilada. The mole sauce that covered these beauties was a welcome change from the standard red sauce. They were garnished with shredded cheese, lettuce and pico de gallo.

OG chose the shrimp tacos ($14.75). The shrimp were sauteed in a bisque sauce topped with queso fresco, cilantro, tomato and chile de Arbol sauce. Like the enchiladas, the subtle flavors of this dish were exquisite. I would have been happy with some decent shrimp tacos. I was surprised with a culinary delight.

Fridas has a menu with a wide variety of options. And while the names of the dishes may sound familiar, their flavor profiles offer a welcome change from the usual. May their guacamole cart roll again.

Scores for Fridas Tacos and Tequila