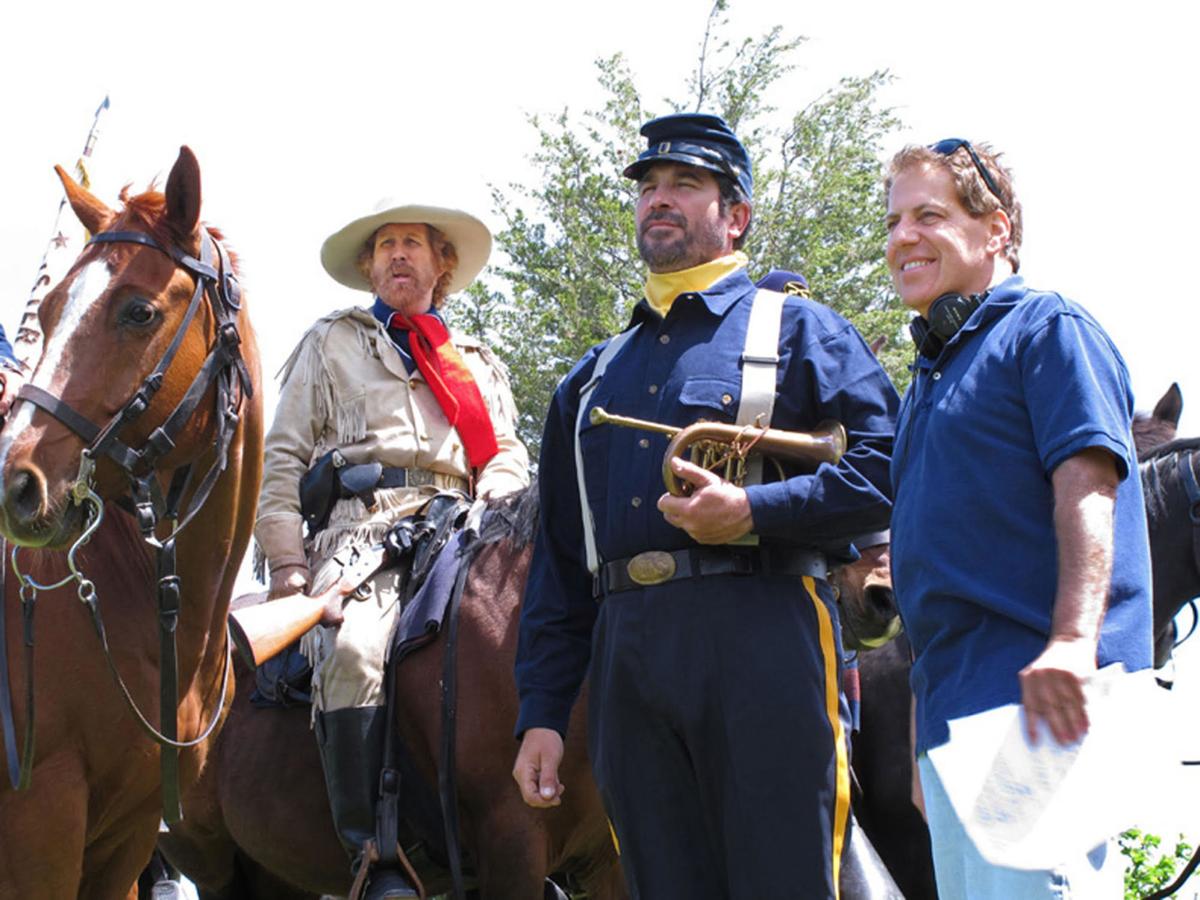 Writer and director Alfred Thomas Catalfo, right, and actors take a stand in “Bighorn,” a supernatural historical fantasy about General Custer’s band master, Felix Vinatieri – an Italian immigrant and the great-great-grandfather of Super Bowl-winning kicker Adam Vinatieri. Felix is ordered to stay behind at the 7th Cavalry’s Powder River camp and misses the Battle of the Little Bighorn, where Custer and his regiment were annihilated. 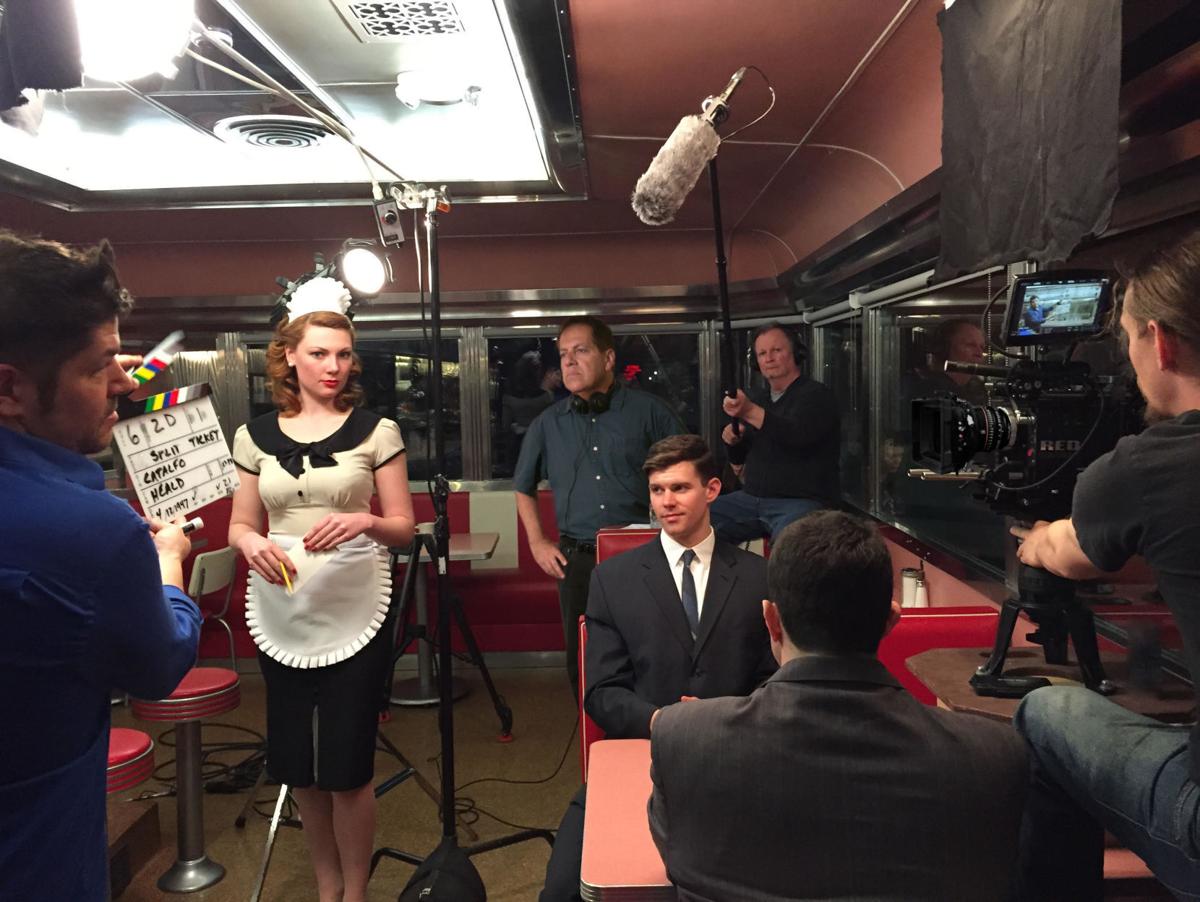 Dover writer and director Alfred Thomas Catalfo, center, works with cast and crew on the set of his movie “Split Ticket,” which was shot in New Hampshire. The supernatural drama is based on true events: In 1947, newly-minted congressmen/future presidents John F. Kennedy, age 29, and Richard Nixon, age 34, travel to Pennsylvania, where they must make a fateful decision.

Sparkling beaches to the east, White Mountains to the north, and historical gems in just about every corner — New Hampshire is chock-full of scenic vistas and hidden glens, and filmmakers love to uncover their secrets.

Filmmaker JD Schuyler, of Indianapolis, shot portions of “Last Man Fishing” (2019) on the Seacoast, as well as Alaska and Oregon.

“The topic of commercial fishing was really interesting because you realize how hard these guys work to make a living while also catching our dinner. It was really eye-opening, and other than being seasick, I enjoyed the trips out on the open ocean,” Schuyler said.

He spent over a month in Portsmouth for production, and came away with a hope that communities and consumers work together to support the local commercial fishing industry.

“Captain Tim Rider’s boat was docked in Eliot, Maine, but we were always delivering his fish to local restaurants like Moxy or Black Trumpet,” Schuyler said. “I loved everything about Portsmouth. The history and architecture was fascinating. The food was amazing, and everyone we met was warm and friendly.

Director Nick Martini’s documentary short “North Country” (2019) profiles the Lahout’s Ski Shop in Littleton, a family-run business that calls itself “America’s oldest ski shop” and commissioned the film for its 100th anniversary. The documentary centered on the store’s founder, Joe Lahout, the son of Lebanese immigrants, who ran the shop for three generations. The film respectfully followed Lahout through the last years of his life.

“It was great to be able to help share their story. It’s pretty incredible,” said Martini, of Winchester, Mass.

Martini “grew up skiing” in Franconia, where his family had a second home. He used a 10-person team for the documentary, which included aerial footage and ski sequences.

One image in “North Country” intertwines modern-day footage of a metal shovel noisily cutting into crusty snow with an old photograph of Lahout, his face covered in frozen drops of water.

“I think it was like negative 10 (degrees and) 40-mile-an-hour winds a couple days. The summer is beautiful, but the winter is harsh up there,” Martini said.

Other filmmakers have also trudged through the state’s notoriously cold weather. Director, writer and producer Jay Craven has shot films including “Where the Rivers Flow North” (1993) with Rip Torn and “Disappearances” (2006) with Kris Kristofferson. Along the way, film locations included Groveton, Lancaster, Orford, Crawford Notch and Lincoln.

“Where the Rivers Flow North” was shot during a brutally cold spell in early November in Crawford Notch, when “winter was just locking in,” Craven said.

The director, based in Peacham, Vt., described a harrowing log-rolling scene.

“There’s a huge storm that prevents logging trucks from getting up to a cabin to take away the logs. And so (the character) says ‘to hell with it’ and puts them into his logging pond, opens the dam gates and logs run down the river. To open up the dam gates, he has to walk on logs that are floating in water, which is not an easy thing to do,” Craven said.

“The temperature was 5 degrees with 35 mile-an-hour winds up in Crawford Notch. It was the most brutal day of filming I ever imagined. And it snowed.”

The advancing river ice was particularly stubborn, he says.

“We had to send out 20 people every morning at 3 a.m. to break up ice on the water so that we would have some semblance of water for the log-rolling scene. We were fighting literally the onslaught of winter. My crew revolted. And I had to (move) them into a hotel that had a hot tub.”

Plus, Torn couldn’t be coaxed out of his trailer, but the protest paid off in other ways, Craven said.

“My lead actor wouldn’t come out of his trailer. So we relied on that stunt man to pull us through. Our stunt man, who was the world champion log-walking guy from Nova Scotia, fell in the water. Didn’t bother him a bit. He just got up and did another take in this freezing cold water. We actually ended up rewriting the ending, with when that stunt guy fell in the water,” Craven said.

One scene from “Disappearances” included a train robbery, for which Craven borrowed a Lincoln steam train.

“We had Kris Kristofferson’s stunt double running from box car to box car. We made the train look faster and bigger — and the track much longer,” Craven said.

“We shot the film in Alaska, Oregon and New Hampshire. We visited (Rider) often over a five-year span,” Schuyler said.

The 2018 documentary short “The North Woods” told the story of Betty and Barney Hill, who in 1961 claimed that they were victims of an alien abduction near Lancaster. Director Adam Bartley of Jefferson shot footage in Lincoln, where a sign commemorates the event as the first widely publicized alien abduction in the United States.

Dover screenwriter, director and producer Alfred Catalfo’s eight live-action short films, among them “The Norman Rockwell Code,” “The Stag Hunt,” “Bighorn” and “Split Ticket,” have all been shot in locations in the Granite State.

“We were re-enacting Custer’s Last Stand on the shores of Great Bay on Durham Point (for the 2010 film ‘Bighorn’). We had soldiers on horseback charging through smoke and volleys of arrows, firing period weapons next to a herd of buffalo behind a 50,000-volt electric fence,” Catalfo said in an email exchange.

Location scout and producer Nicholas Koloski of Claremont sought out New Hampshire scenes for several movies, including “In Your Eyes,” “Only Daughter,” “Live Free Or Die” and “Love Comes Lately.”

“One of the Backstreet Boys filmed inside Time-Out Americana Grill in Claremont for a short film. We filmed all the stunt scenes for Joss Whedon’s ‘In Your Eyes’ movie (2014) on the railroad tracks in Claremont and Claremont Center Self Storage and General Auto Salvage. A lot of scenes from several movies were filmed at The Claremont Boat Landing,” Koloski said.

So far, these filmmakers have found filming in the Granite State a positive experience.

“New Hampshire has beautiful and unusual locations, and public officials — and property owners — have always been accommodating to the needs of production,” Craven said. “I’ve shot part of six movies in New Hampshire and it’s always been pleasant.”

Martini has found it a welcoming place as well.

“Everywhere we shot, everyone was super interested in participating,” Martini said.