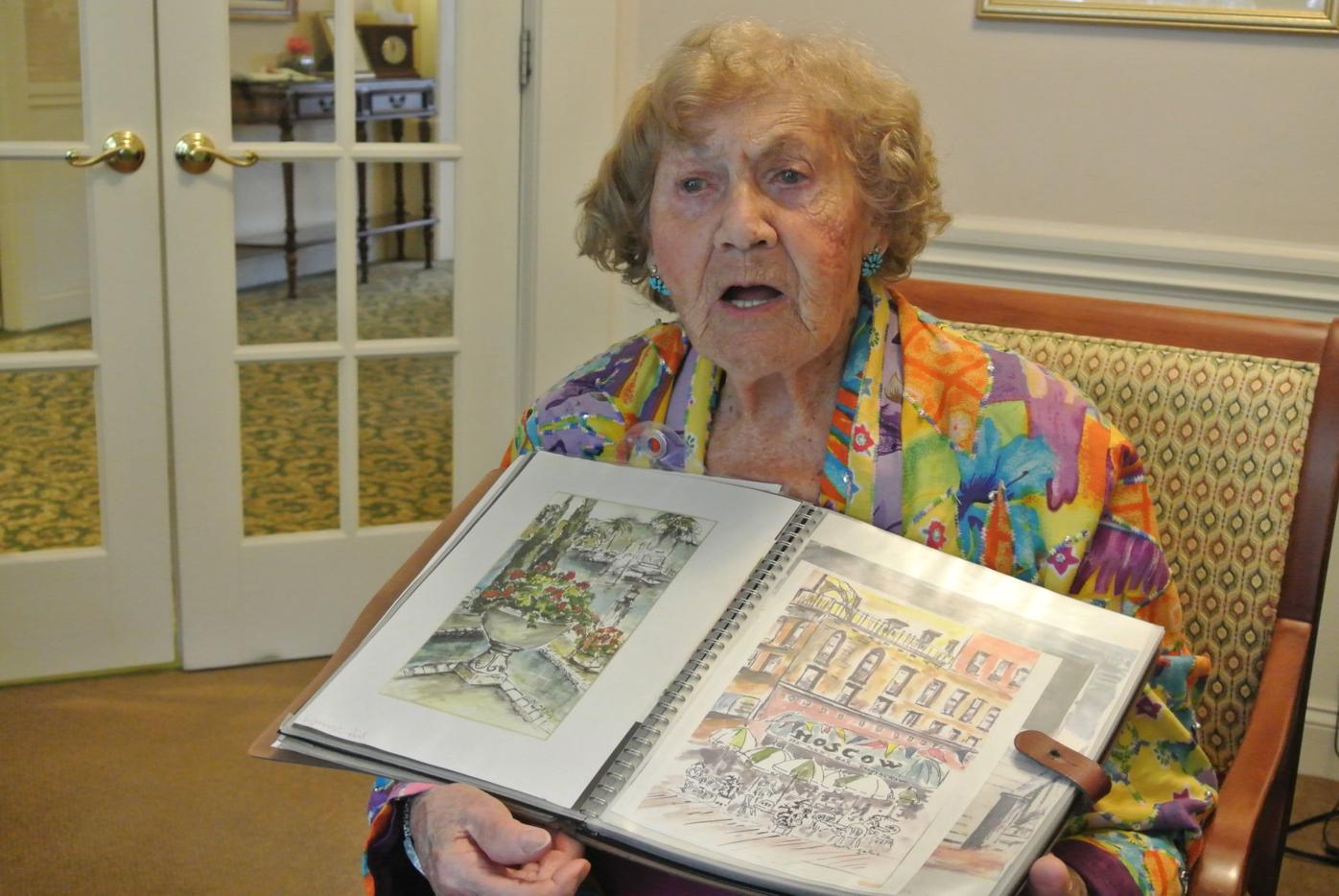 Holocaust survivor Ruth Gellis, 95, said her watercolors are inspired by the places she has lived. The Wheelock Terrace Assisted Living community in Hanover resident gives talks about her life to area schoolchildren. 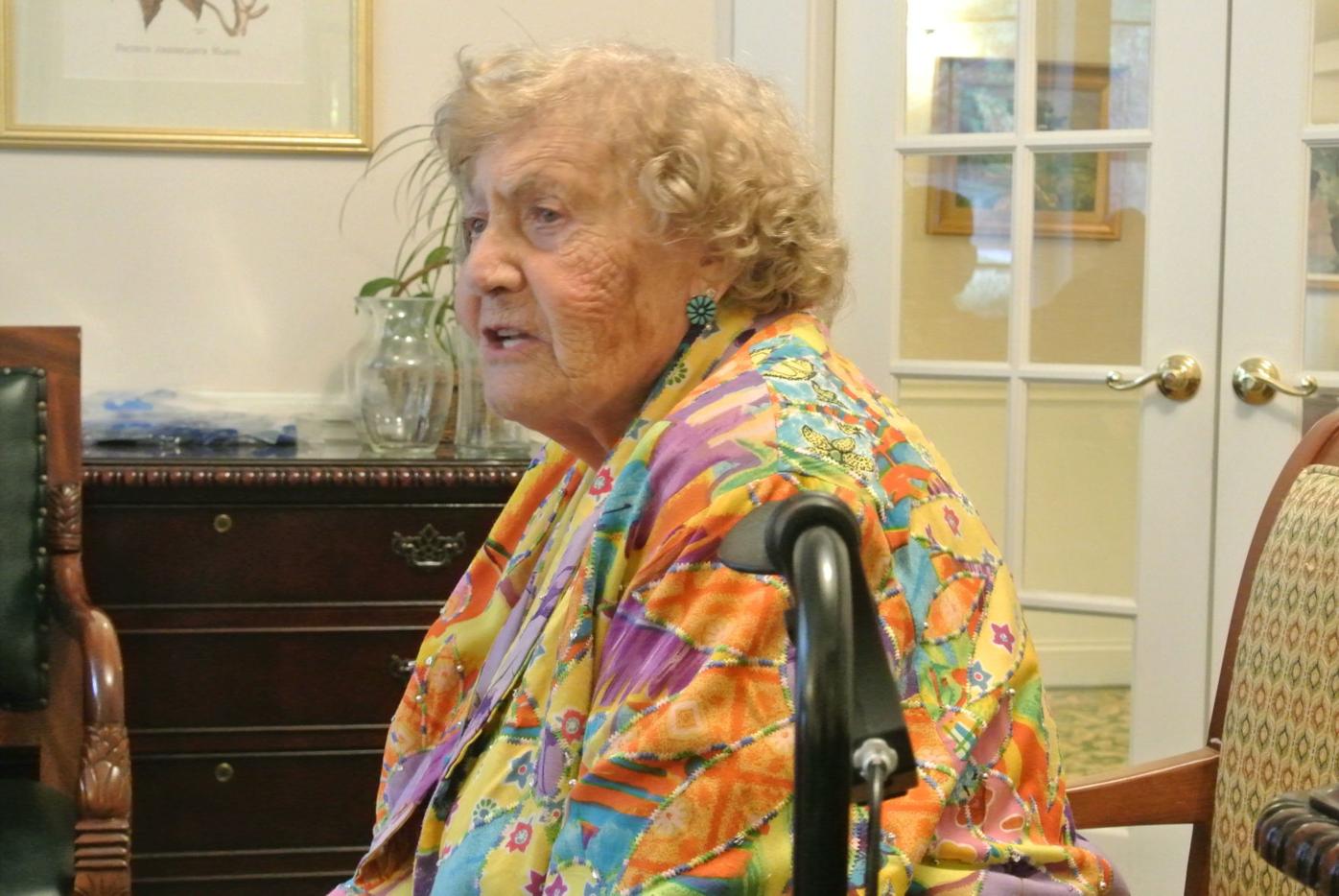 Ruth Gellis of Hanover said many youngsters do not know what happened in World War II or about the millions of deaths in the Holocaust.

Holocaust survivor Ruth Gellis, 95, said her watercolors are inspired by the places she has lived. The Wheelock Terrace Assisted Living community in Hanover resident gives talks about her life to area schoolchildren.

Ruth Gellis of Hanover said many youngsters do not know what happened in World War II or about the millions of deaths in the Holocaust.

HANOVER — Ruth Gellis still has nightmares from the years she and her family spent on the run from the Nazis.

“We lived in fear,” Gellis said.

At 95, Gellis is eager to tell her story of survival, especially to young students.

“We have to tell the story; it’s important,” she said.

Gellis’ story is one of fleeing from Nazi terror to building a new life in America as a mother, wife and artist.

She now lives at the Wheelock Terrace Assisted Living community in Hanover, and gives talks about her experiences to schoolchildren.

She grew up in Essen, Germany, and was 11 when her father, Joel Wuhl, realized their home country was no longer safe for them as Jews.

It was 1936, and the Nazi party had been in power since 1933. As the persecution of the Jewish people was increasing, Joel Wuhl decided to leave and start a new life for his family in South Africa.

Gellis said her father went ahead to find work and secure a place to live, while she and her mother, Clara Wuhl, stayed behind to sell their belongings. Gellis remembers all of the family’s furniture and possessions being packed up and carted away — even her pet canary, which used to sit on her head.

“To this day I want my bird back,” she said.

The family reunited in Cape Town, South Africa. But after a year, Joel Wuhl missed European life too much and decided to take the family to France, where they had relatives.

“It was the biggest mistake my father made,” Gellis said.

The Second World War had not started, and France was still free. But by 1940 France would fall to the Germans and the nation would be taken over by a collaborationist government of Marshal Philippe Pétain, who ruled the country as a puppet of the Nazi regime. Jews like Gellis and her family were soon persecuted.

Gellis recalls trying to go to school to learn French and the mayor of the town forcing her to leave.

That would be the last time Gellis would go to school as a child.

Her father was soon arrested, but somehow managed to work out a deal that would have him join the French Foreign Legion.

While he was stationed in North Africa, Gellis and her mother were put into “forced residencies” in the south of France as the German and French governments persecuted the 300,000 French Jews.

They were constantly monitored and harassed by the police, Gellis said.

The situation improved when her father managed to get discharged from the Foreign Legion and they were reunited in France. The forced residency was close to the border with Spain, and many people were sneaking through the mountains to get out of France, she said.

Gellis said her family could not risk the trek as her mother was diabetic and not strong enough. Finally, the day came when they were rounded up along with other Jews and taken to the train station.

Gellis and her family were loaded onto a train headed for Auschwitz concentration camp. Her father was quick enough on his feet to get the family off the train.

“My father said, ‘We’re getting off at the first stop,’” she said.

They managed to sneak past the armed guards and get off the train.

“We never heard of those people again,” she said of the other passengers.

They soon found refuge with a relative who was friendly with the local police commissioner. When the Germans came looking for Jews in that village, the Wuhl family was tipped off and able to hide, she said.

One day the commissioner told them to flee before German forces entered the village. The family went on the run, dodging bullets as they ran out of the village, she said. Sixty people were killed.

Gellis said her family stayed on the move.

“We were the wandering Jews,” Gellis said.

They managed to make it until the Allied invasion; France was liberated in 1944. Gellis said her father soon had the family back in Paris. At that time, Gellis was a young woman with no education, and she had trouble finding a way for herself, she said.

Even though she could speak German, English, Dutch, Yiddish and some French, she felt uneducated. She spent most of her time caring for her mother, whose diabetes got worse.

She was 20 and felt life was passing her by when her father introduced her to a young American medical student, Maurice Gellis. They fell in love and married, and in a few years moved to New York City, where Gellis’ family lived in the Bronx.

Maurice and Ruth had three children and eventually moved to a house in Brooklyn, where he had a residency at a hospital.

It was then Ruth Gellis decided to go back to school for the first time since the French mayor had kicked her out of a classroom for being Jewish. She studied and earned her GED, and went to college, earning a three-year degree in physical therapy. But she wanted something more.

“I always wanted to be an artist,” she said.

Gellis studied art under Edgar Whitney, a teacher who influenced a generation of watercolorists. Gellis’ watercolors have been shown in galleries around the world, and many of her paintings depict the places she has lived.

“I just jumped right in,” she said.

Gellis said many students do not know what happened in World War II or about the millions of deaths in the Holocaust.

“I tell them how lucky they are, and to be happy. They have a good life,” Gellis said. “And they don’t have to live in fear.”