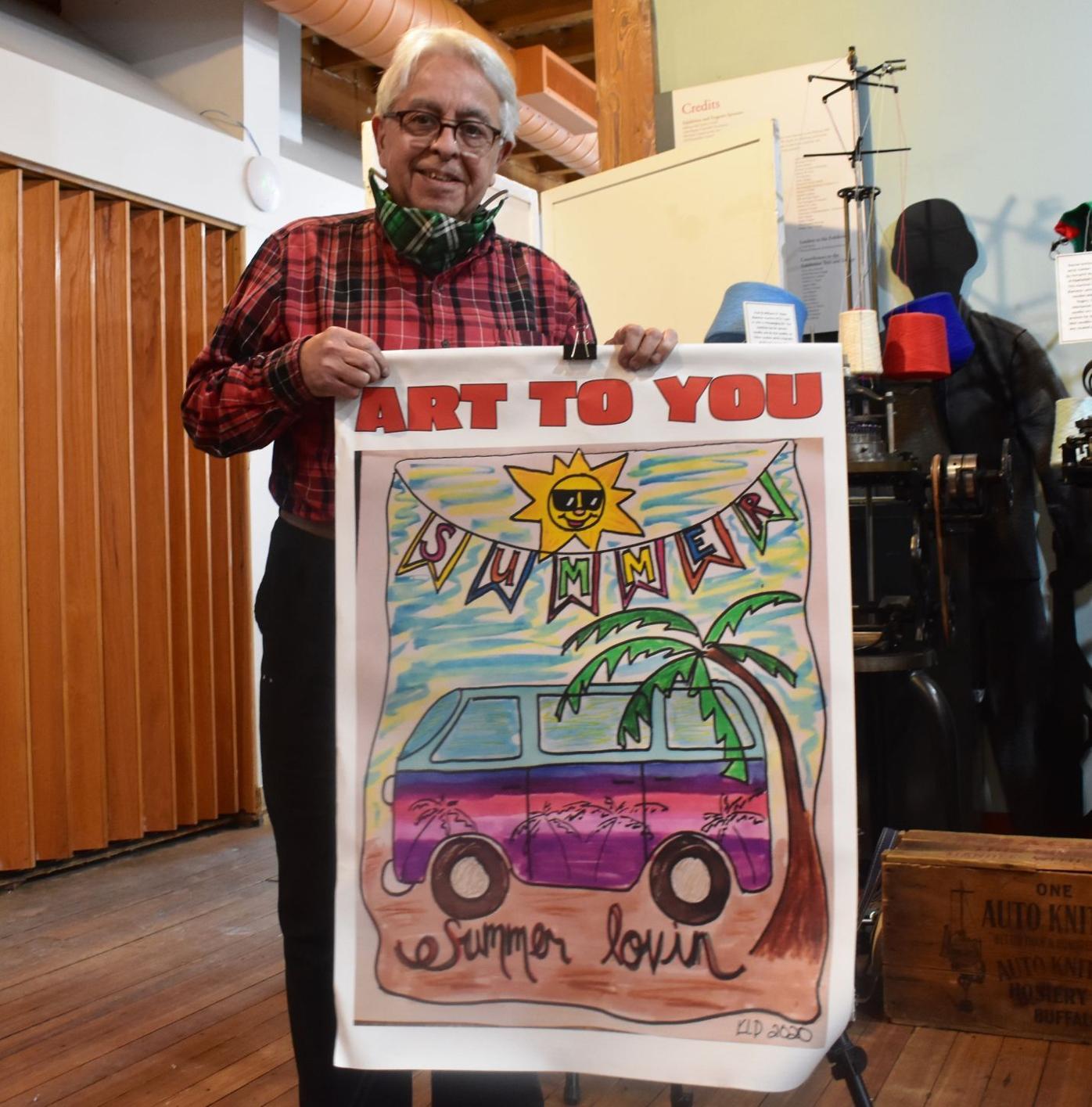 Larry Frates holds a poster promoting his “Art To You With Larry” drawing classes at the Belknap Mill in Laconia. With COVID-19 bringing so many social distancing restrictions, Frates decided to take his classes virtual. 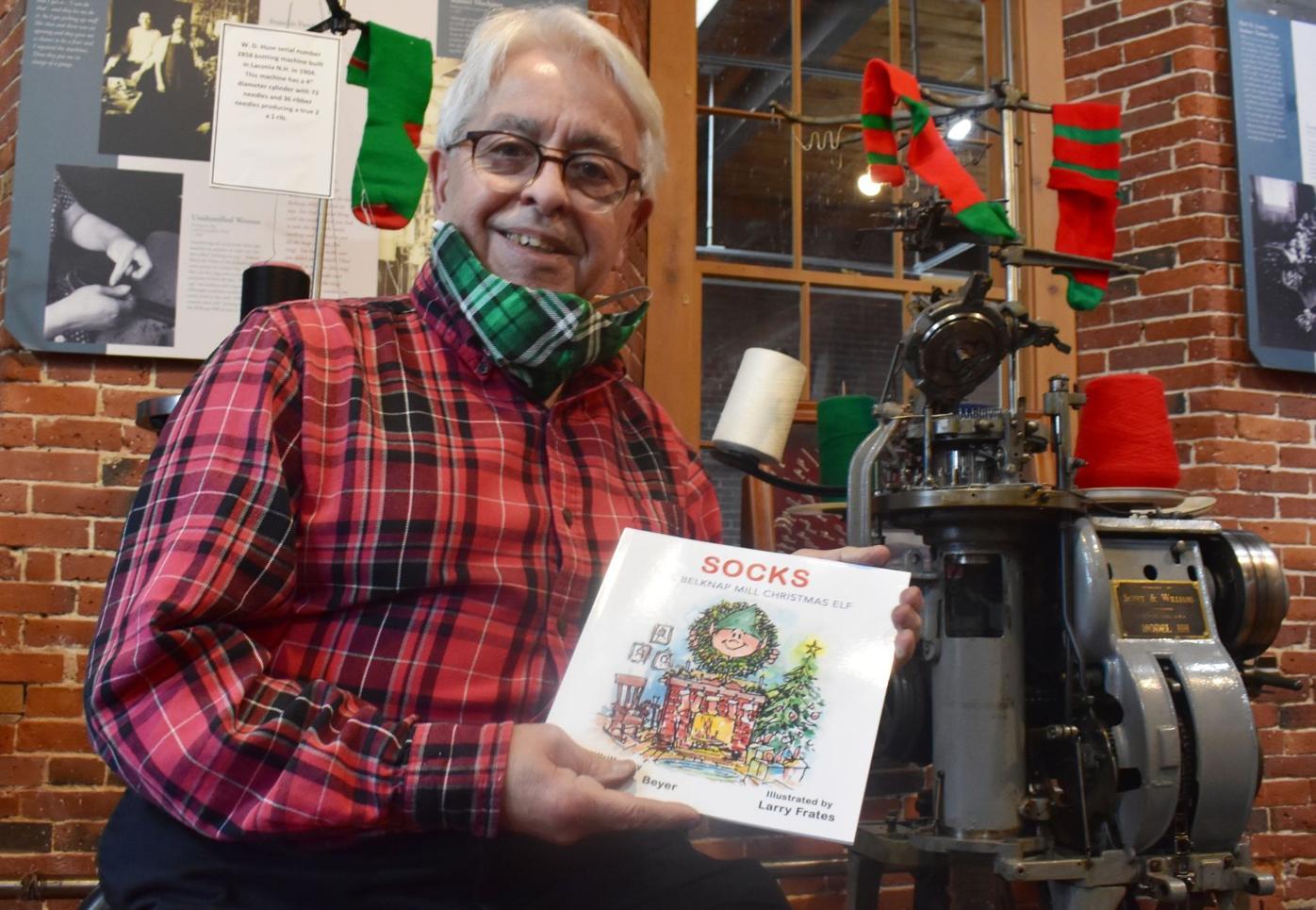 Larry Frates, artist in residence at the Belknap Mill in Laconia, holds a copy of the book “Socks: The Belknap Mill Christmas Elf,” which he illustrated. The book was authored by Chris Beyer.

Larry Frates holds a poster promoting his “Art To You With Larry” drawing classes at the Belknap Mill in Laconia. With COVID-19 bringing so many social distancing restrictions, Frates decided to take his classes virtual.

Larry Frates, artist in residence at the Belknap Mill in Laconia, holds a copy of the book “Socks: The Belknap Mill Christmas Elf,” which he illustrated. The book was authored by Chris Beyer.

L arry Frates is a man of many talents. He’s been on “Family Feud” five times, performed magic for former British Prime Minister Margaret Thatcher and drawn caricatures of each member of a Laconia High School graduating class.

“Believe me, from across the pond, Larry has been a breath of fresh air. (It’s good for) all ages and abilities. I have joined in on a number of occasions with my little grandson,” said Lynton Parmar-Hemsley, an artist from North Yorkshire, England, who does classical portraiture and commercial illustration. “The world needs more Larrys. Long may these online 30 minutes of fun continue.”

A native of Acushnet, Mass., Frates, 73, is a longtime resident of the Lakes Region, and he’s well known on many fronts.

He’s painted in watercolors and acrylic for 50 years; taught at both Southern New Hampshire University and Plymouth State University as well as at Gilford Middle School; and is a magician and a Fulbright Scholar.

Frates said one of his paintings, done while he was working in Scotland’s Orkney Islands, was acquired by the late Queen Elizabeth The Queen Mother. She congratulated him for having been accepted earlier that same day into The Magic Circle, the younger, British version of The Society of American Magicians.

Frates also performed magic for Margaret Thatcher and, at her behest, tried to make the Labor Party disappear, although he concedes that, at best, he may have only divided it.

Along with his family, Frates has appeared on the Family Feud game show five times and won a car, the top prize.

With former Laconia Parks and Recreation Director Dick Tapply, Frates crafted the free Christmas Village event, through which each visiting child get a toy and the chance to meet Santa Claus.

Frates also is founder of both the Laconia Snow Shovel Brigade and the Laconia Lawn Chair Brigade, whose high-spirited displays of marching — and sitting — made them a half-time show favorite for eight years at the Mud Bowl, the World Championship of Mud Football in North Conway.

Alas, after 15 years of performing, the Lawn Chair Brigade is no more, said a deadpan Frates. “We decided we had to fold.”

Caricatures for a whole class

In 2020, Frates, who has been the artist in residence for five years at the Belknap Mill in downtown Laconia, drew caricatures of each member of the Laconia High School graduating class, using just their yearbook photos.

The caricatures were exhibited and later presented to the graduates at the Belknap Mill, which is where Frates had also been doing his “Art to You with Larry” drawing classes on cartooning on Tuesdays.

In his “Lunchbox-Paintbox with Larry Frates” on Wednesdays, he does all the drawing. Visitors watch, ask questions and eat their lunches while he goes from a blank page to a finished image.

“When COVID-19 hit, it was horrifying,” said Tara Shore, program and operations manager at the mill. “We were a very busy building then, constantly in motion. We pivoted and so did Larry.”

And, “because we had some downtime” in 2020, said Frates, the mill also published a children’s book: “SOCKS: The Belknap Mill Christmas Elf.” Chris Beyer wrote the book while Frates illustrated it.

Meantime, the mill has built up an online library of Frates’ classes.

“People who were already sitting home have something that is fun to do,” Shore said.

And it’s not only in the Lakes Region. There are people checking in from around the country and around the world.

Alfred Reid, a cartoonist /caricaturist in Dublin, Ireland, wrote in an e-mail that he has been taking part in “Art to You with Larry” since it started last year.

“Larry has inspired many people around the world to take up art,” said Reid. “(He) explains his thought process as he is drawing.”

Parmar-Hemsley agrees. He met Frates through the International Society of Caricature Artists.

Every month, members draw a caricature of a fellow member and “one particular month the victim was Larry,” said Parmar-Hemsley.

In the process of gently poking visual fun of Frates, Parmar-Hemsley said he discovered that he and Frates “shared a life-long love of magic,” adding it was quickly apparent to him that Larry was “one of those people that people are drawn to — no pun intended.”

“When I found out that he was hosting his own ‘online art programs,’ I knew I wanted to be part of the fun,” said Parmar-Hemsley.

In New Orleans, Upturn Arts, a non-profit aimed at children 4 to 14, decided not to craft a virtual program, but instead make use of art classes by Frates and others, said Dana Reed, the organization’s executive director.

Frates aims for professional-quality videos, but he doesn’t expect viewers to copy his artistic style. “I’ve seen so many people who run a class and teach people to paint like they do, but I want you to paint like you.”

Frates himself started taking formal art classes at 11. He also got interested in magic at a young age, first to make pocket money and then as a teaching tool in the classroom.

“All of the arts tap into what makes us human,” he said.

It doesn’t have to be done on a grand scale.

“I’ve never aspired to be a national artist, but to be an artist who inspires others to create.”