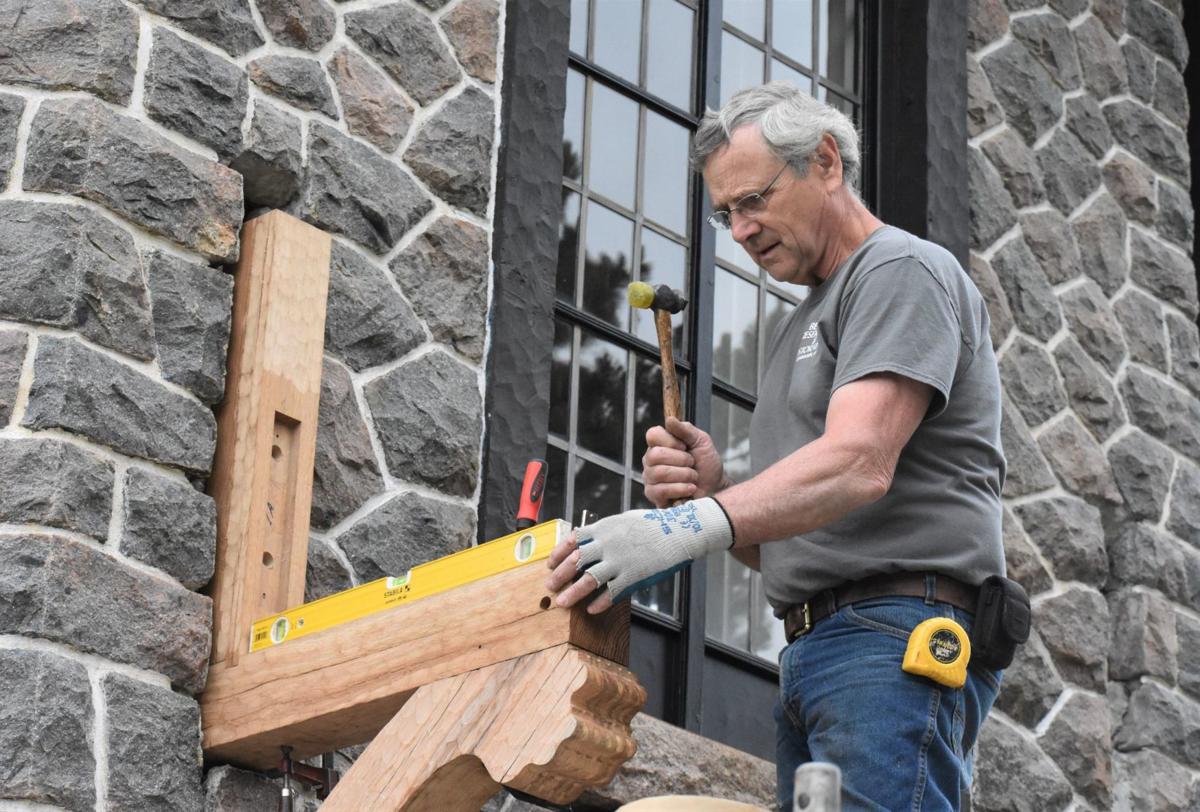 Omar Clairmont of Bedard Preservation and Restoration of Gilmanton works to replace a balcony on the north tower at the Castle in the Clouds using white oak timbers that are hand pegged just like the original. 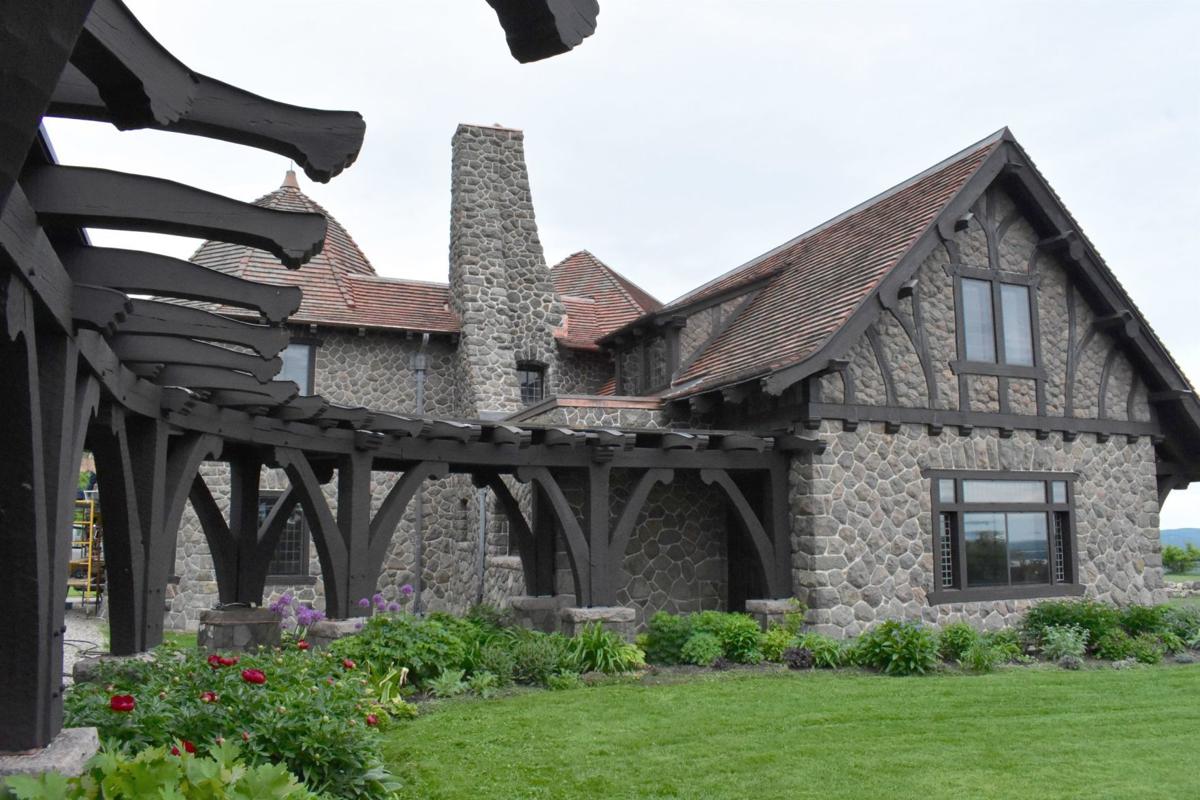 Thomas Plant hired 1,000 workers, mostly Italian stone masons, to build the grand estate, Lucknow. All the granite was quarried from the property and the white oak wood used throughout its construction was also harvested on site. 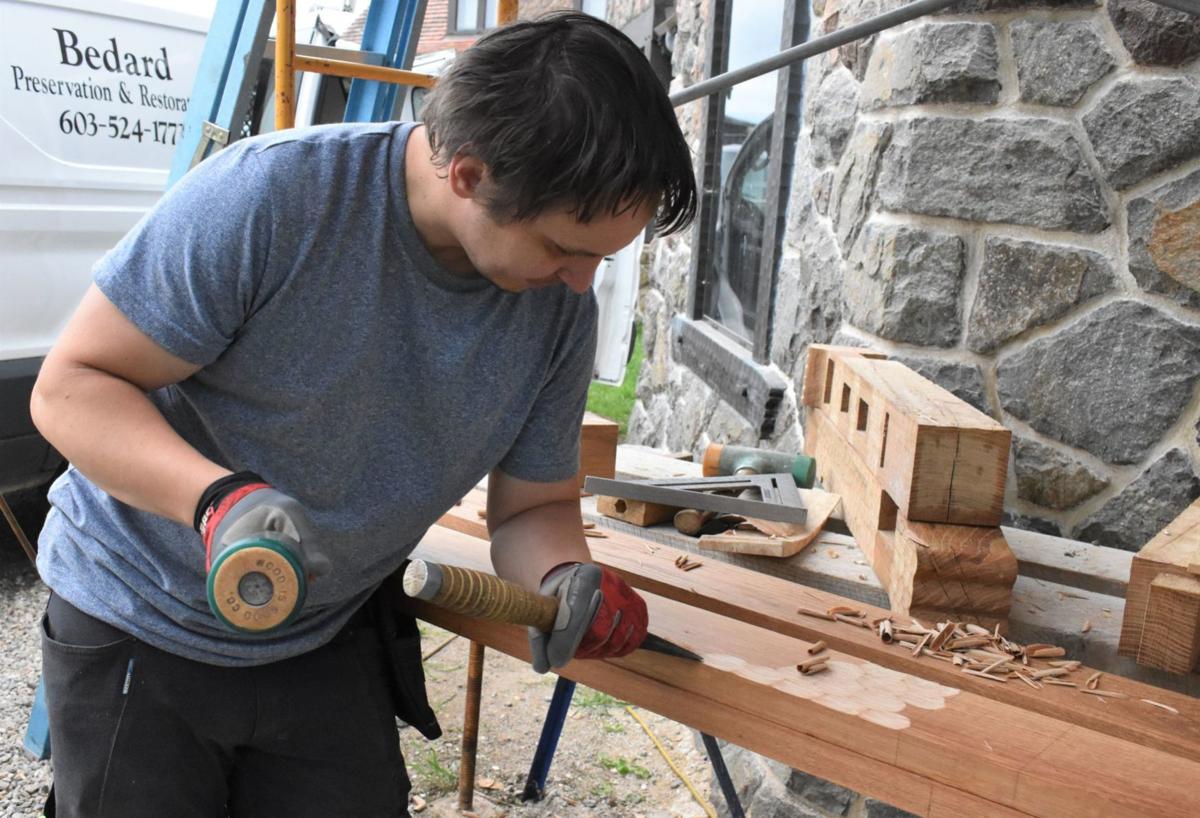 Thomas Juricka uses a mallet and chisel to chip carve white oak planks for the flooring of the balcony being replaced on the north tower. The balcony on the south tower was destroyed by a tree felled in the 1938 Hurricane, but has since been replaced with an exact copy. 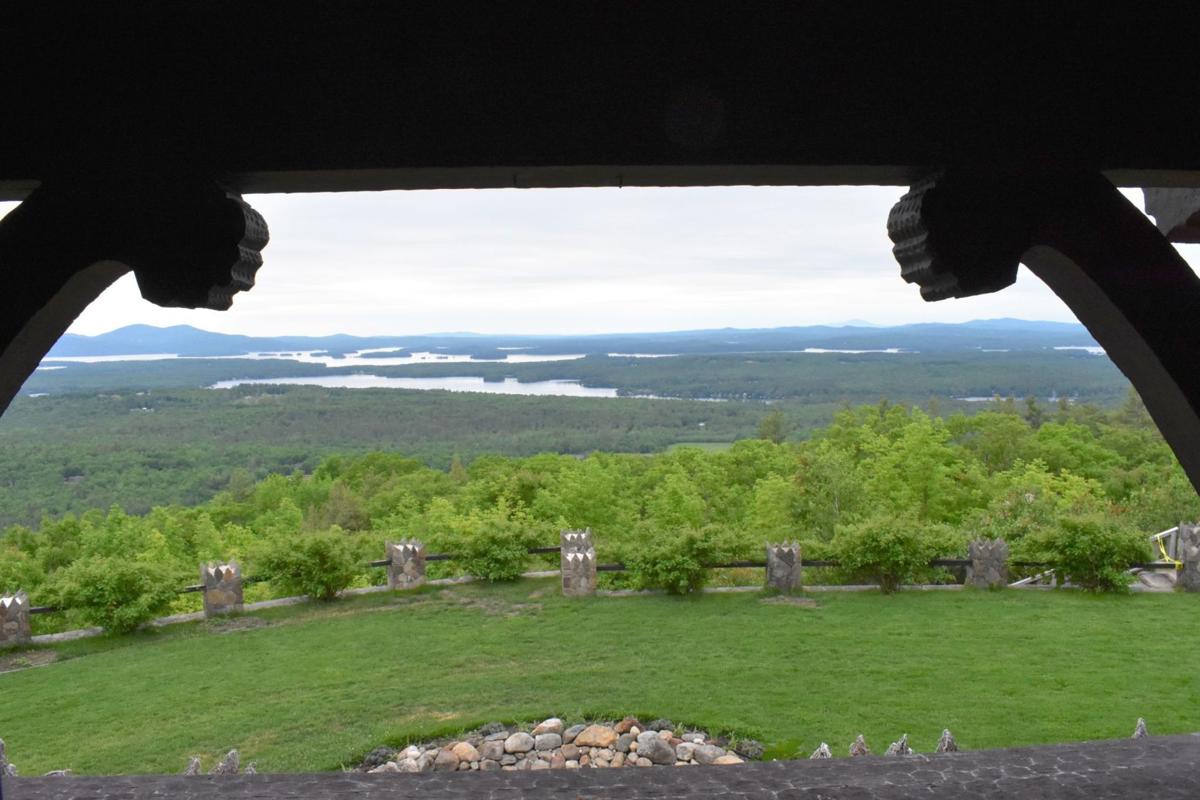 Hand-carved rafter tails flank this balcony at the Castle in the Clouds in Moultonborough, that offers a panoramic view of Lake Winnipesaukee and the Belknap Range. The property is a popular venue for weddings and annually hosts 35 to 40 events each year.

Omar Clairmont enjoys the challenge of working on a castle.

On and off for the past 12 to 15 years, Clairmont, a craftsman with Bedard Preservation and Restoration of Gilmanton, has worked on restoring the Castle in the Clouds, the mountaintop mansion built in 1913-1914 by shoe magnate Thomas Gustave Plant.

Unlike its medieval counterparts, this castle, originally named “Lucknow,” was designed to welcome visitors, not repel them.

This year, the popular tourist attraction off Route 171 in Moultonborough will open on July 1 and visitors will get to see the latest renovations that are returning the castle to its original Craftsman-style grandeur.

Clairmont spent the winter and spring repointing the cut granite stones of the north tower and replacing rotted window and door frames, and weather-damaged rafter tails.

More recently he and fellow restoration specialist Thomas Juricka were busy recreating an exacting replica of a balcony made of chip-carved, hand-pegged white oak.

“The way it was joined, it encouraged rot,” Clairmont said, explaining he made the most subtle of changes to prevent water from pooling in the newly created joinery, which also benefited from the application of a modern construction adhesive.

Castle curator Robin Sherman said the goal is to keep as much of the original material as possible in keeping with the Secretary of the Interior’s Guidelines for Historic Restoration. But time and the elements have taken the toll in a few areas, requiring some features to be recreated from scratch.

Case in point: The four 106-year-old copper-rimmed skylights were no longer weatherproof. Director of Buildings and Grounds Al Sochard said Bill’s Roofing, owned by Bill Ready of Manchester, who previously repaired the castle’s terra cotta tiled roof, also had the expertise to be able to make copies of the skylights, two square and two oval.

“The house deserves it. Such an amazing amount of hand craftsmanship went into its construction you have to take care of it and bring it back to its original glory,” said Sherman.

In the grand living room, which includes an inglenook with twin benches and a marble-faced fireplace, craftsman Mike Sawyer has been busy refinishing the wood paneling, the seating and built-in bookcases.

After multiple layers of shellac that had been added over the years were removed, the original low-luster finish was recreated, Sherman explained, allowing the beauty of the wood grain to show through and brightening the room considerably.

And while the upper plaster walls will remain painted this season, the Castle Preservation Society is having the silk damask wall covering that once graced the room recreated.

Designed by Boston architect J. Williams Beal, the 16-room house included many innovations that were cutting edge at the time, including a brine-cooled refrigeration system and a laundry room with heated drying racks. Each of the baths is equipped with a shower fed by spiral pipes with hundreds of tiny holes that create a surround spray of needle-like jets, a forerunner of spa Vichy showers.

Other features include interlocking floor tiles in the kitchen, a central vacuum and an intercom system.

The octagonal dining room in the south tower has undergone a multi-year restoration. The ceiling, which features 50 individually molded plaster pieces radiating out from the center, is decorated with twisting vines and wisteria. The paneling is made with an ultra-thin, heavily grained elm veneer.

Sections of the ceiling, along with the paneling near the windows and exterior doors, had sustained water damage and needed restoration.

Restoring the landmark property, Clairmont says, is all in a day’s work for the six-man Bedard crew who collectively have more than 125 years of combined carpentry experience and are no strangers to historic properties.

They have also been selected to do restorations at Strawbery Banke in Portsmouth and the Colonel Paul Wentworth Museum in Rollinsford, among others.

“It’s a unique place, to say the very least,” Clairmont said. “Not many people understand what’s involved in it. There is never a dull moment.”

More information can be found on the web at www.castleintheclouds.org