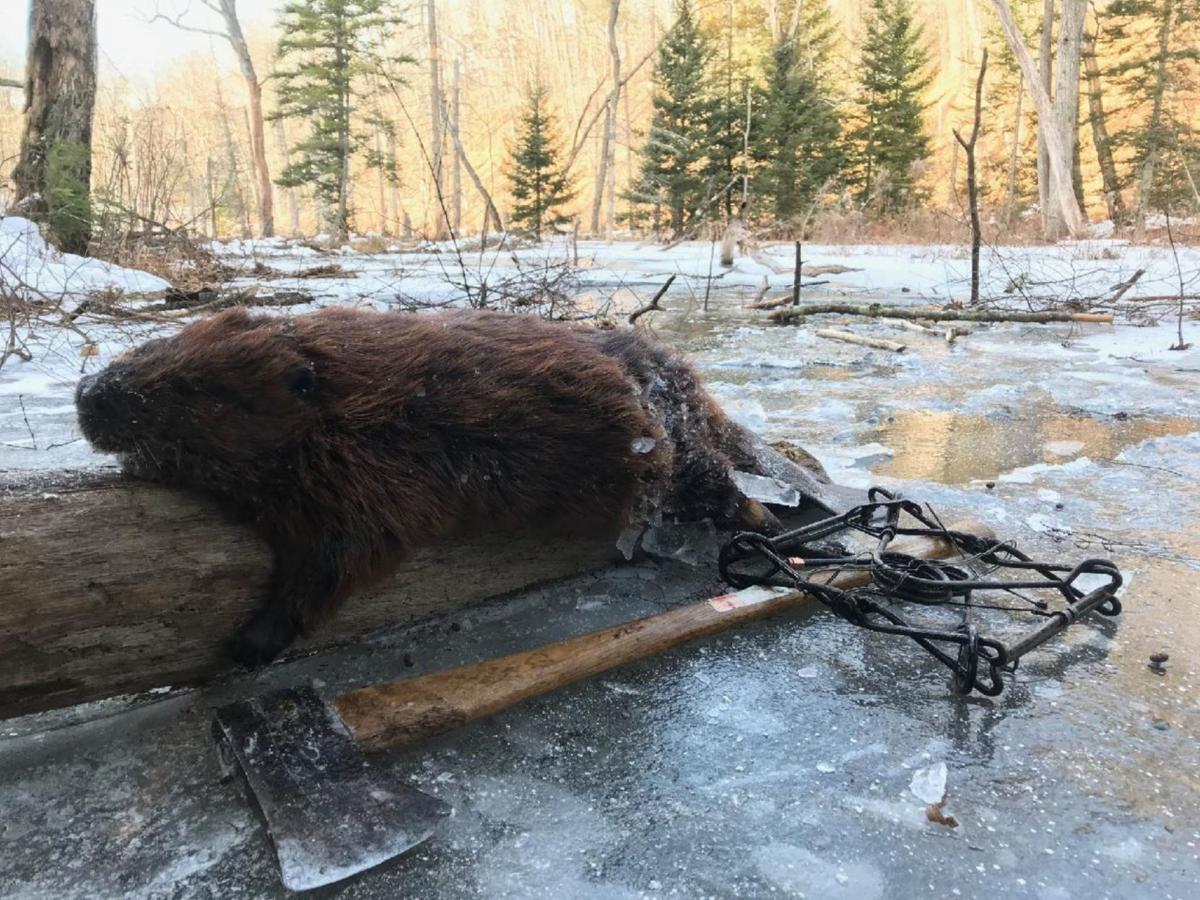 Trapping beaver like this one in Plymouth last week provides a unique winter sporting challenge.

A NEW HAMPSHIRE winter can offer many different conditions for an outdoor enthusiast. Opportunities to ski, snowshoe or ice fish are abundant and recreational activities are as varied as the ever-changing conditions. Few sportsmen, however, put themselves in the unique habitats as those that are explored by winter trappers.

Beaver trappers, for example must pursue their game in the unique aquatic environment that includes snow, ice and running water. These men and women rely on traditional instinct and skill to utilize the renewable resource that beavers provide. In New Hampshire, they serve as a valuable component of furbearer management and are examples of sound and ethical conservation.

Historically, beavers were trapped for their thick, water-resistant pelt but today’s inspiration is rarely a monetary one. The market for furs fluctuates based on the economies of other countries and the changing winter climates. Most of the trappers that I know enjoy the pursuit and process animals in similar ways with much more personal rewards. Once skinned and tanned, many of them share the high-fat beavers with other hunters and trappers as bait. The pelts may be used simply as a display or turned into a warm winter hat, or slippers.

More recently, trappers are enjoying the culinary possibilities of beaver. A large animal might weigh 50 pounds and provide a generous portion of meat that can be baked, grilled, or stewed into a soup. Another item that can be utilized from a beaver includes the castor gland, which has uses that range from medicinal products to food additives.

Trappers are no different from hunters and fishermen in that the successful ones understand the biology and behavior of their game. The presence of beavers on a given water body is easy to confirm by an experienced woodsman. Fresh tracks, melted snow around a lodge, and even the smell of beaver activity is part of the skilled art of trapping.

There are two ways to set beaver traps, which include both baited and blind sets. Baits include the fresh cuts of aspen branches or products that mimic a succulent root such as a peeled potato. Blind sets are positioned to intercept an animal as it travels in predictable locations. In both of these instances, the instinct of beaver must not be underestimated as they are weary around anything suspicious.

Most of the trappers I know are aware of the occasionally negative view of the sport. In an effort to counter this image, many will provide landowner assistance and alleviate the damage that may be caused by these industrious animals. In many instances, a beaver left unchecked in the winter will dam a stream in the summer, causing damage to land or property. At this point, an animal damage specialist will have to be paid to fix the situation. Stopping these problems before they start is an unrecognized role of winter trappers.

There are many outdoor adventures to pursue during a New Hampshire winter. Typically, they do not involve submerging hands and gear below the ice. For the hearty trappers among us, the conditions are perfect for the admiration and challenge of understanding the natural world of aquatic mammals.