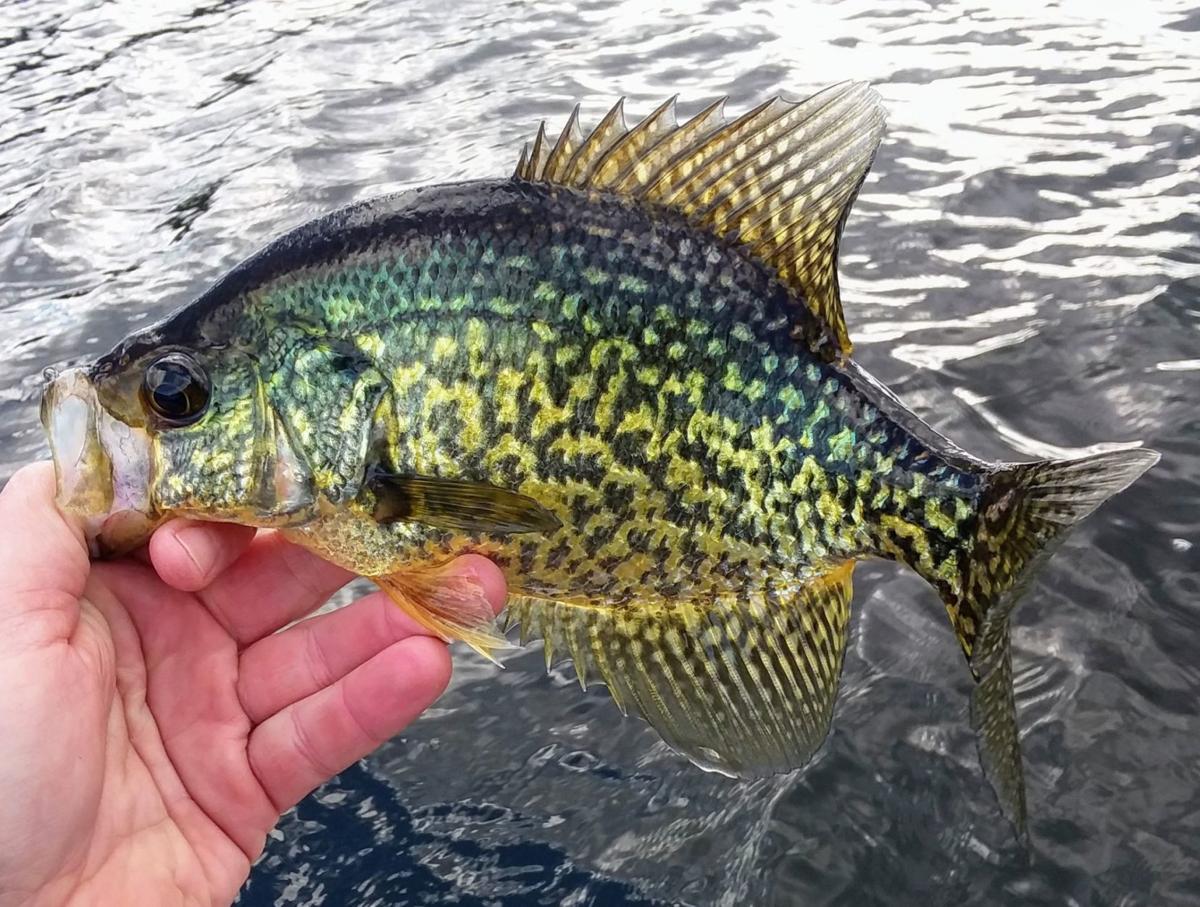 The author caught this Black Crappie and many more like it in Lake Winnepesaukee last week.

I’M A glass half-full kind of guy. In respect to fishing, that glass is completely full ...to the brim, often overflowing. Rarely discouraged by climate, obligation, or common sense, I am always inspired to try and catch a fish.

Last week, for example I called my friend Ben and did not discuss the closed sections of the Connecticut River. Nor did I begrudgingly observe the drawdown of the lakes that occur every November. I did not even mention that the water temperatures have dropped to such cold readings that most fish lips have grown tight except to shiver. What I did say to Ben was far more optimistic and, although not phrased as a question, served as one. “I bet the Crappie have schooled up.” Ben responded with similar thrift. “Whatcha doin’ Saturday?” With that, our plans were made.

Every year, in the late fall, the opportunity to catch Black Crappie is at its peak in New Hampshire. These hearty panfish congregate in large numbers while they take advantage of many different food sources. In order to find success, a crappie fisherman first locates these schools and then presents bait at the right depth.

Normally, a literary transition into specific bait, lures and presentation would be in order and a good writer would cover them in great detail. I’m going to skip all that and report that, once located, Black Crappie will eat anything. Well, almost anything.

Their mouths are small and delicate but their appetite and aggression supersede this limitation. My preferred tackle is a small, curl-tailed jig. I have tried every possible color and size — the fish mock my over-thinking by eating them all. They are often caught on live bait such as worms and crickets, but will also chase and strike an inline spinner.

Crappie can also be caught on spoons, plastic baits and just about anything else in my tackle bag.

The serious crappie fisherman can, unlike many others, be completely outfitted for under $20. I’m a certified gear head, a chronic over-spender, and take angling for any fish way too seriously. Crappie fishing grounds me and forces sensible decisions concerning bait and tackle.

When I met Ben last week, all of my gear fit on the front seat of my truck — one six-foot ultra-light rod and a 12-inch plastic box full of lures.

On that cold November day, Ben and I dropped our lines over different sides of the boat and regularly felt the tug and hook set of these beautiful fish. Never really casting, we simply opened our bail and let the line spin free until our jig hit the desired depth. Often the fish stop them in free fall and a more subtle hook-up takes place.

Black Crappie are the only fish that I keep and eat. While the daily limit is a liberal 25 fish, I usually keep three of the biggest, fillet them out and Ben makes the best fish tacos the world has ever seen. We are often eating this fresh meal within a few hours of having caught the fish.

When most sportsmen are deer hunting, I’m usually trying to squeeze one more fishing trip into open water. In a month, small ponds will be frozen and I’ll be standing on them but, for now, the last open water opportunity beckons me and, thankfully the Black Crappie are able to scratch that itch.