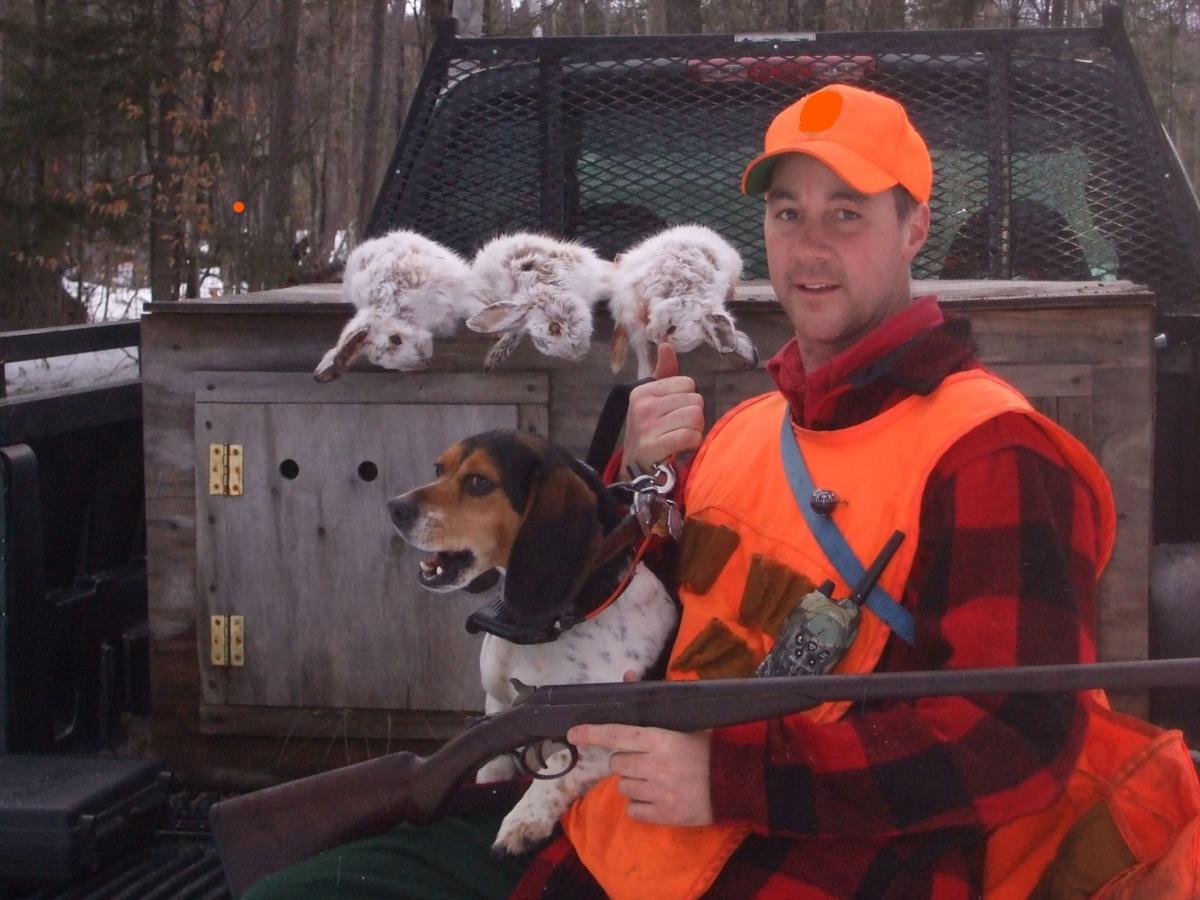 Chris Egan of Pittsburg poses after a successful rabbit hunt.

If you have never gone rabbit hunting, you might expect the frantic pursuit of a speedy little mammal. After all, rabbits are known for their ability to quickly maneuver through the understory and rely on their speed to get out of tricky situations.

While these traits are certainly accurate, there is a way to hunt bunnies that significantly slows things down and offers a relaxed and controlled approach. The scenario I’m describing is done not with specialized gear or in distant locations. It is in fact done with a few friends. All it takes is two or three hunters and one dog to create a successful team.

The creature I’m writing about, of course, is Lepus americanus — the snowshoe hare, and its distribution throughout New Hampshire is vast. Chasing them through the woods has become my favorite distraction from ice fishing and I learn a little more every time I go. I have a few coworkers who are kind enough to invite me along and share their knowledge. Their dogs are pretty sharp, as well.

Like all hunts, the adventure begins by picking the right location. Rabbit cover is pretty easy to predict and even more simple to verify. These creatures leave definitive sign with their unmistakable foot prints and scat that stands out like ....well, scat in the snow. Even though they turn white in winter and take on the color of their surroundings, these guys don’t necessarily hide very well.

I usually look for a spruce or cedar swamp with plenty of blow downs and a thick canopy that leaves the forest floor just snowy enough for tracking. It doesn’t take long for a good hunter and dog to know if they have chosen wisely.

Just as I’m noticing signs of rabbit, the dog will commence with tail-wagging action and a slow, guttural howling that signifies a pursuit. Amazingly, most dogs can distinguish between new and old scent and only pursue the trail of a freshly traveled rabbit.

Once the chase is on, hunters ready themselves mentally and position a firearm for an impending shot. Almost always done by shotgun, it becomes important to concentrate and identify a moving target that might be game and might be dog.

As the rabbit moves away from the dog, it does so with surprising calm. Not even close to the exaggerated flush of a bird, the snowshoe hare usually bounds a few graceful leaps and rests. Members of the hunting party might call out to one another with statements such as; “Moving to my left!” or “It’s headed right at you!”

Sometimes there are several rabbits in the same cover and a skilled dog circles around them in an effort to contain and flush them toward the hunters. This presents obvious excitement as anticipation mounts and all eyes focus intently into the quiet snow. When the sound of a shot rings out, everyone pauses.

The dog looks around, the hunters tilt their head for better reception, and someone yells out; “I got ‘em.”

Snowshoe hare are one of the most interesting animals in the woods of New Hampshire. Their populations are cyclical yet resilient. Hunting them allows for a great contact and better understanding.

When done with a few friends and a dog, the experience is genuinely rewarding and a great outdoor adventure.