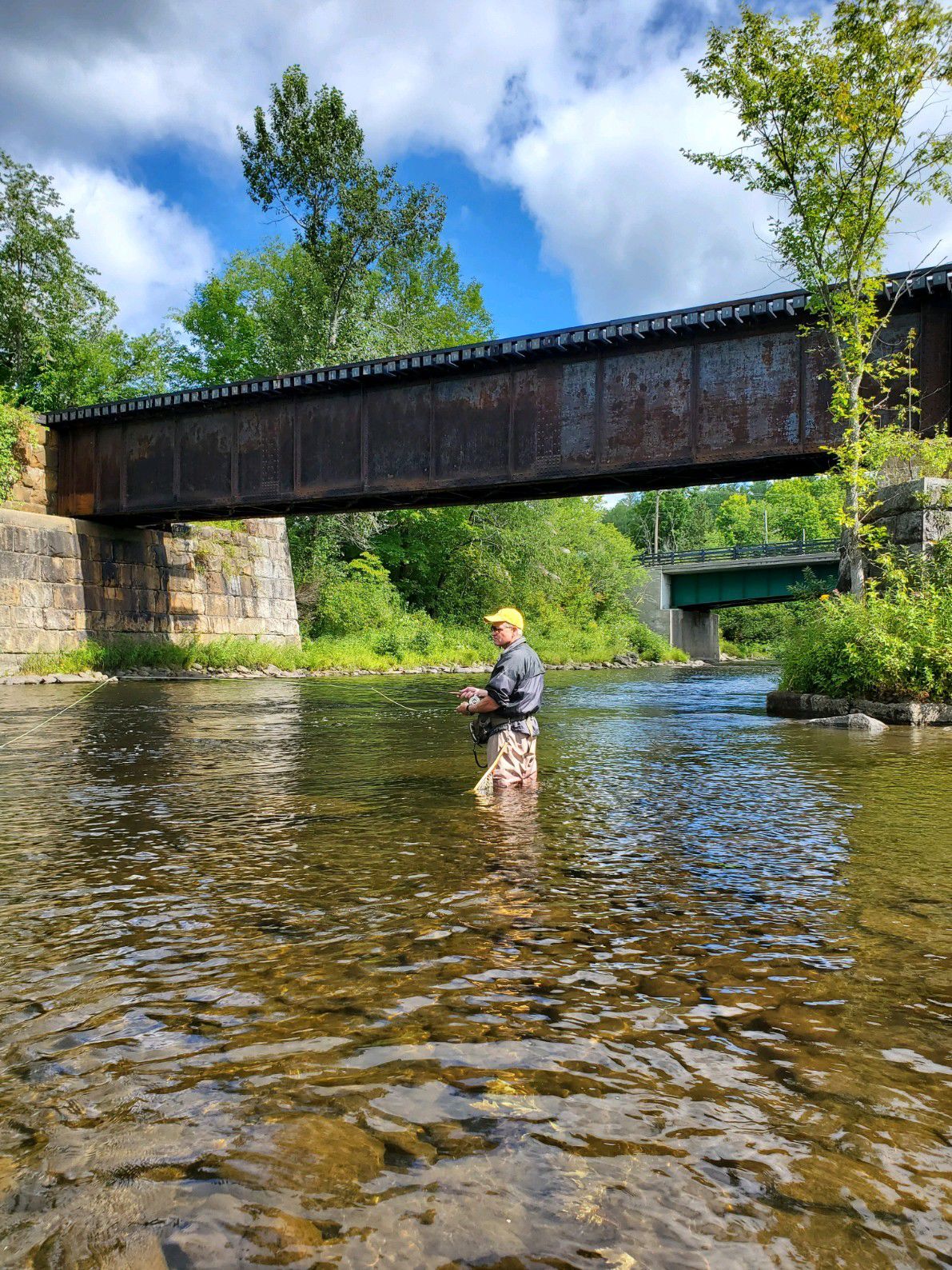 Nat Crane of Tuftonboro fishes beneath a railroad trestle on the Upper Connecticut River.

I TRY to be a well-rounded angler. Persistence and scientific awareness is often blended with a slight flair for an artistic appreciation of the whole process. Utilizing this three-pronged approach, I would like to introduce a component to my fishing repertoire that may seem strange. Equipment, strategy and fish behavior are common topics to discuss, but I think I will go way out there on this one.

Railroad trestles are as frequent in my adventures as any other structure and, as such, cannot be discounted. These iron bridges often span rivers and allow for the safe passage of trains. Their use in such ways is infrequent and I have only occasionally witnessed a train crossing a river but the structures remain and create a unique background for fishing.

It must be noted that I originated among trains. As a child born in the Midwest, I know that railroads were the industry around which most communities were settled. Much like happens in the logging industry of New England, I was born to a father who worked for the same outfit for 50 years, as did his father and brothers. Everyone shared in the common goal of maintaining a working railroad that kept families afloat. Also mirroring New England timber and paper commerce, the industry wore down, facilities eventually closed and everything became redefined. It can be said that I view railroad crossings a little differently than other anglers.

The railroad trestles that I find on most rivers have a unique influence on the hydrology and fish habitat that they perforate. Where a span of river might be otherwise uninterrupted, massive stone and concrete pillars divide the water into three or four different channels. These areas are often constricted and increase the energy of the water passing through. Each section is unique and fishes differently.

When a river is divided into three sections, those on the edge have the least amount of water while those in the middle are deep and fast. Most of the huge pedestals on which the bridge is supported have flat, concrete areas on the bottom that provide support and a safe place for anglers to stand and fish.

Casting a fly rod among these structures can be difficult and I have lost many flies on the rusty, iron latticework that supports the bridge. Roll casts and short back casts must be used to overcome some of the challenges in these constricted areas.

Railroad trestles create a man-made canopy over rivers and the benefits are similar to those found in natural systems. They provide shade on sunny days and a sense of cover for weary fish constantly looking upward to avoid danger. There is also an abundance of insects and other food sources that utilize the structure and the protection it affords from wind and rain.

I have seen many anglers fishing from the actual bridge and would like to take this opportunity to advise against it. It can create an unhealthy release for fish and an unsafe location for humans as one need not be reminded of the frantic train scene in the movie “Stand by Me.”

When I see or hear a train rumbling along, I am brought back to my youth and, even the smell of one is met with pleasant nostalgia. As I fish in and around these structures, I clearly have a connection not shared by many but strong enough to inspire a lifetime of memories.