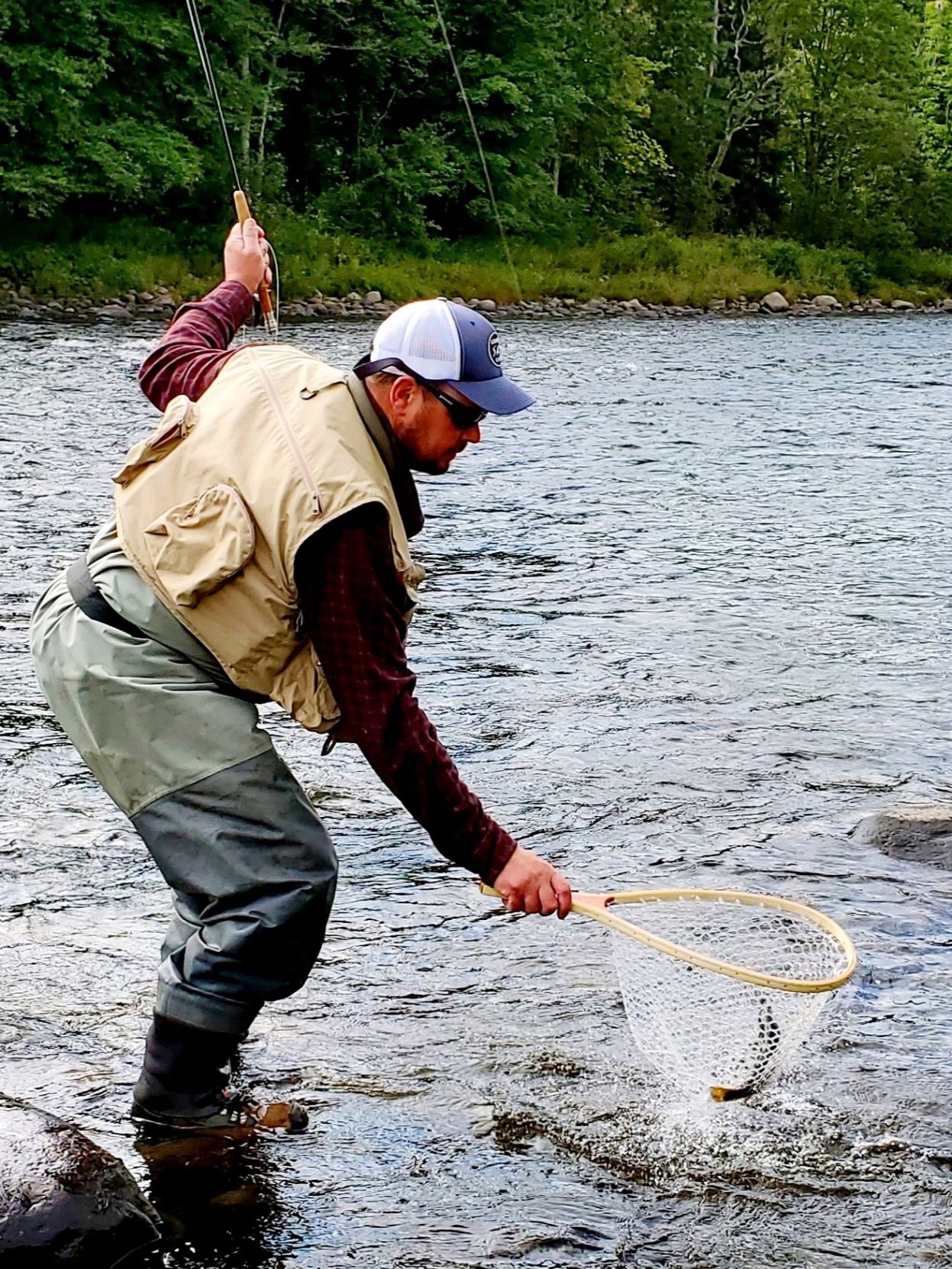 Keith McGilvray of Loudon found some great trout fishing in the low water conditions of the Androscggin.

IT IS well known that this summer has been one of considerable drought throughout New Hampshire. In addition, temperatures soared into the 90s for more days than we average and official heat waves were declared.

As I prepare for some of my favorite fall fishing adventures, it becomes important to investigate the consequences of such a weather pattern. It is the fall that sees trout and salmon wander into the waist-deep water of our large rivers like the Connecticut, Saco and Androscoggin.

Things could be a little different this year.

The fish have been there all summer but autumn triggers some behavior that makes for some awesome fishing. Throughout July and August, they looked for cool water and, when they found it, moved very little. A single trout in a deep pool may have stayed there for weeks, comfortably feeding in a somewhat gluttonous lifestyle.

As our days get shorter and water gets colder, a change takes place in these fish, and their movements are more frequent and often unpredictable. Spawning instincts are the most logical of explanations for their frantic behavior, but climate conditions figure strongly as well.

As mentioned, the weather of last few months has been anything but typical and I spent much of last week trying to draw some conclusions and find fish. Most of my approach was fly casting in mornings and evenings while the midday sun still makes it hard for fish to feel comfortable enough to feed.

My first conclusion was a positive one as the low water levels provided access to areas that I simply could not get to a month ago. I could wade into more spots and was often able to cross the river entirely, opening up even more opportunity.

I’d like to say that, as I get older, I take fewer risks when it comes to walking in fast-moving rivers. In reality, my age has not brought the maturity and caution that most men develop and I found myself being swept around while I tried not to fall. I should be much more careful as the water cools and I fish alone.

The second-greatest advantage to low water was the simple mathematical observation that a decreased percentage in water means that fish must confine themselves to a smaller area. While a river may span 200 feet in the summer, the wet width is now a fraction of that and swimming trout are squeezed into tighter zones for feeding and travel.

The decreased flow also allows an angler to read the water with greater certainty. Pools are easy to identify and sections of differing habitat often mend into favorable spots for trout and salmon to swim, eat, and rest. Simply stated, low water puts the fish much closer to the fisherman.

It would be hard to mention fall fishing without mentioning the diversity of food sources available. By this point in the year, many aquatic insects have fulfilled every part of their life cycle and have been eaten in every stage. Swimming nymphs, emerging pupae, and flying bugs have become easily recognized and often exploited by hungry fish.

The hot summer has also produced some huge terrestrial insects that end up stuck in the water where they are not at all equipped to swim. I saw grasshoppers last week that I’m sure have not been identified by science as their size and color alone made clear. New Hampshire fish of all species have been getting fat on grasshoppers for the last month and will strike at them with a strange sense of vengeance.

Even though my lawn looked worse than it ever has and my neighbor’s well went dry, the drought conditions of 2020 are not all bad. Fall fishing makes it easier to see the advantages and take more of a glass (or well) half-full attitude toward nature.