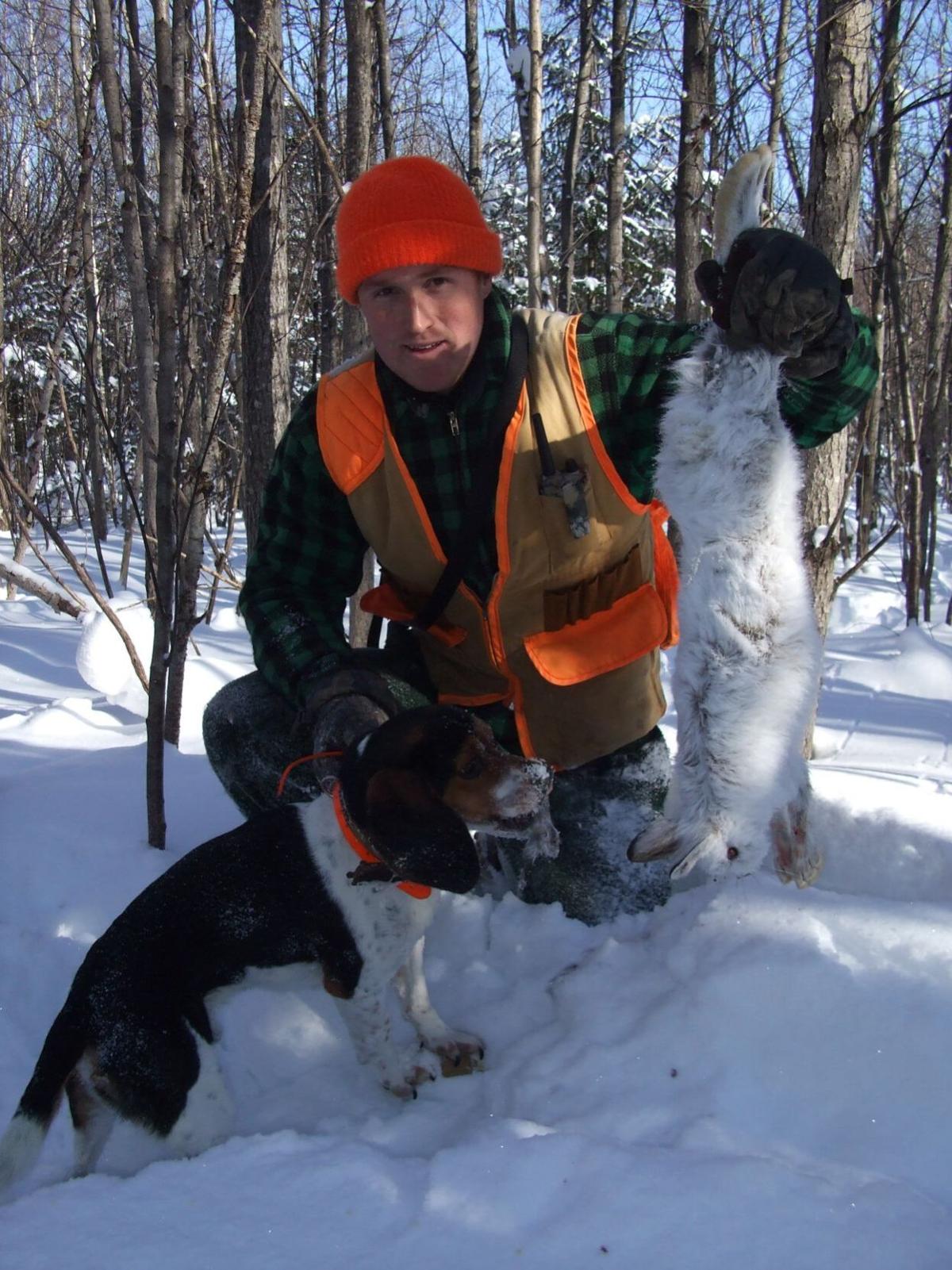 Matt Holmes of Whitefield successfully hunted a few snowshoe hare like this one near a favorite ice fishing spot in northern New Hampshire.

MOST of my adventures afield involve the study and pursuit of fish. Regardless of season, climate, or the level of absurdity, I find myself in constant motion as it relates to those creatures that swim with mystical ease throughout our waterbodies and subsequently haunt my dreams.

Occasionally, angling adventures overlap with other activities such as camping, hiking and, on very special occasions, hunting. The first two weeks of October, for example, offer trout fishing and bird hunting at such a fantastic level that my shotgun and fly rod often share the same seat in my truck. This overlap in seasons also exists in January as ice fishing and rabbit hunting provide me with dual choices for outdoor activities.

Last week, I was standing alone on a small pond in Milan trying to jig up enough yellow perch to make fish tacos for dinner that night. Among the cold silence, I felt an intimacy with nature that often supersedes my individual presence. I became a small piece in a much larger puzzle and was acutely aware of every sight and sound around me. It was with this heightened perception that I noticed some movement in the tree line surrounding the pond.

The background was two colors in an even ratio; white from the snow as it mottled the green from the trees. The only contrast was a small, brown shape that crept slowly through the underbrush. I knew immediately that I was watching a bobcat creep through the woods, comfortable and confident in the fluffy snow.

As the cat came into better focus and its large size became clear, I wondered if I might be watching a Canada lynx. Their existence in northern New Hampshire has been confirmed in the last few years and the idea that I might be seeing an organism for the first time was almost overwhelming.

I quickly reeled in my line, placed my jigging rod on the ice and walked slowly toward the disappearing creature. The skills of existence in this cat are so fine-tuned that it quickly fled from my approach with silent expertise.

In an effort to determine whether I had seen a bobcat or lynx, I found and closely examined the tracks in the soft snow. The small size and short gait told me quickly that it was a bobcat that had skirted the pond and not its larger cousin. Interestingly, the cedar trees and squishy soil held the sign of what seemed to be an exorbitant number of rabbit tracks — an abundant food source for bobcats. Having identified the species of cat, I now had an understanding of why I found it in that location. The observation and understanding of the situation only heightened my appreciation.

Back at the truck, I loaded my gear and made a quick phone call to one of my closest friends, Matt, who happens to be an accomplished rabbit hunter. I explained in vivid detail what I had observed only minutes ago and Matt was sold. I thought that we might hunt the area over the weekend, but he asked me to sit tight and wait for him — he was on his way.

My day was planned for ice fishing and, although I was appropriately dressed for rabbit hunting, I had not brought my shotgun. My pursuit of any game, fish or rabbits is not measured as a success or failure by whether I harvest anything and I knew I’d be content walking unarmed with Matt and his dog.

Within the time frame of two hours, we had taken three snowshoe hare and walked back to the truck with sweat on our foreheads, snow on our shoulders and smiles on our faces. The fish tacos that I had planned on for dinner would be substituted with rabbit stew. The opportunity to hunt and fish on the same day would serve as an appetizer.