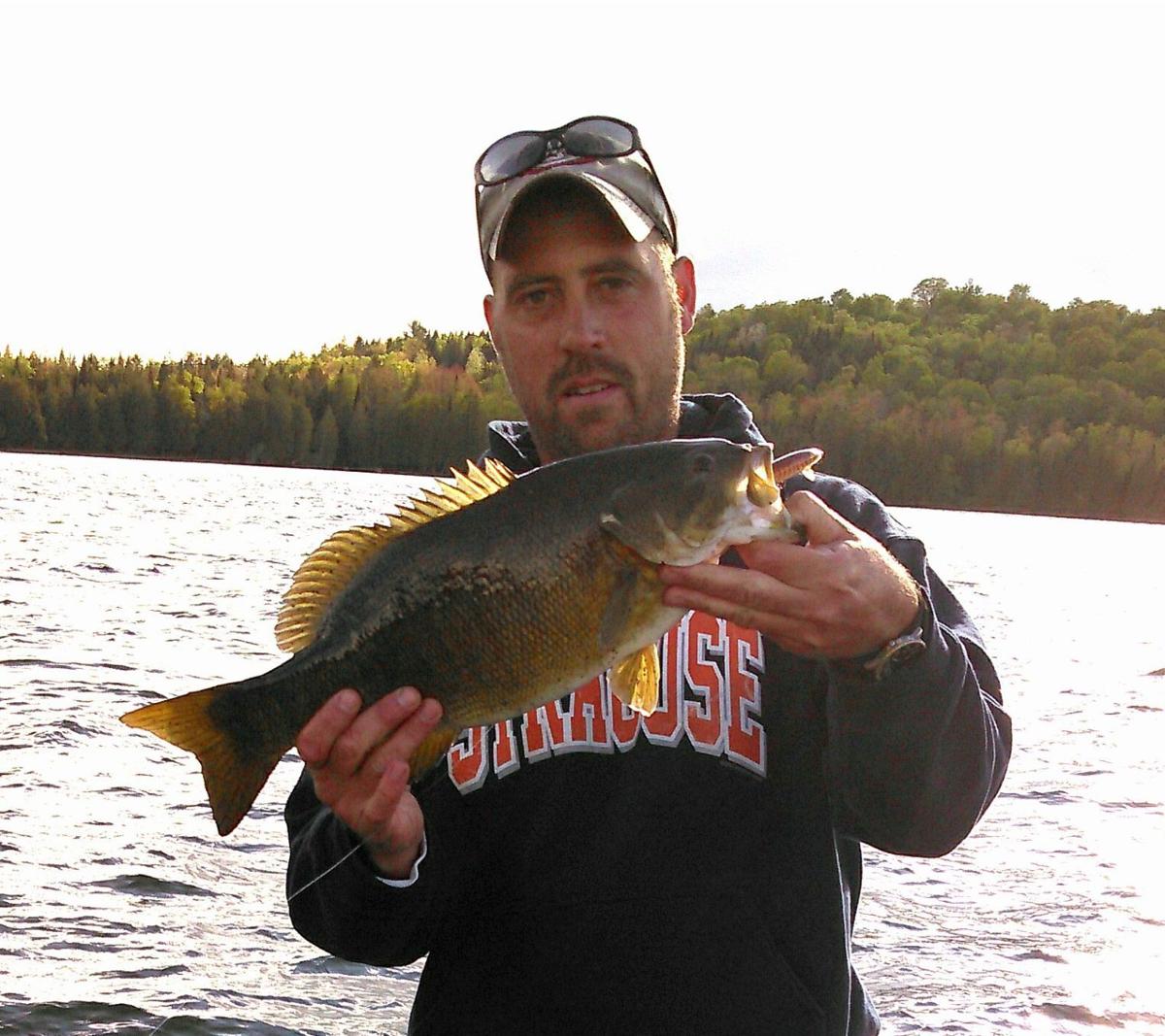 The author caught this bass just after ice-out on South Pond in Stark.

AT DIFFERENT TIMES of the year and under varying conditions, fish behave differently. I have frequently observed that the most successful anglers recognize this and pursue their game guided by this knowledge.

It would stand to reason, then, that an early-season bass fisherman must use different techniques than those used in the middle of summer. The fish are likely in different locations, utilize different food sources, and exist in different stages of their life cycle.

As often happens in my personal world of angling, I was recently proven wrong. I was bass fishing in cold water where the ice had disappeared only a week ago. It was overcast and spitting snow as I paddled my canoe around a pond that I knew to hold big largemouth bass. I was using a canoe because the boat launch still had a five-foot snowbank preventing a successful boat launch.

I was confident that the fishing would be slow and a strategic, minimalist approach would be necessary. The bass would be weary, I thought, and light line and small bait would be the key.

I started with a six-foot ultra-light rod with a four-inch curl-tailed plastic worm. I hoped to move the bait very slowly through submerged structure such as downed trees and stumps.

After two careful casts and slight approach, the worm was aggressively eaten, pulled away by a monster bass. I thought that my rod would break or that my spool would empty as this fish pulled my canoe around like a dog sled.

It seems strange to describe my mood as “frightened,” but I was. I was anticipating the soft-lipped bite of a weary fish and instead seemed to have awakened a sleeping giant.

When I finally landed and released the fish, I took a few minutes to compose myself, stop shaking and try to figure out what the heck just happened.

I had a lot to think about.

My new approach was to lay the small fishing pole down and pick up one with a little more backbone. A seven-foot medium action bait caster seemed appropriate. I also abandoned the baby worm that I was using and tied on a big, heavy spider jig that looked like something a cat may have coughed up. I was able to cast the thing over 100 feet but tried instead to flip it into favorable spots.

Almost instantly, I hooked another bruiser and played the fish quickly and much more confidently than the first. I was truly amazed at the aggressive nature of these fish. Where I initially expected to sneak up on them and cast small, careful baits, I was now fishing them as if it were August.

I caught one of the best fish of the day, a smallmouth bass, on a five-inch jerk bait. By the time I loaded the canoe back in my truck, I had caught as many fish as I typically do in the warm summer waters.

One of the best parts of fishing is that no one has it figured out. A successful angler will venture afield with a specific approach but must be prepared to change it. What works one day may not work the next and there are very few certainties. I’ve been fishing for almost 50 years and I’ll be the first to admit that I have a lot to learn.

The excitement and challenge of this uncertainty is addictive and I hope to continue exploring it for another 50.