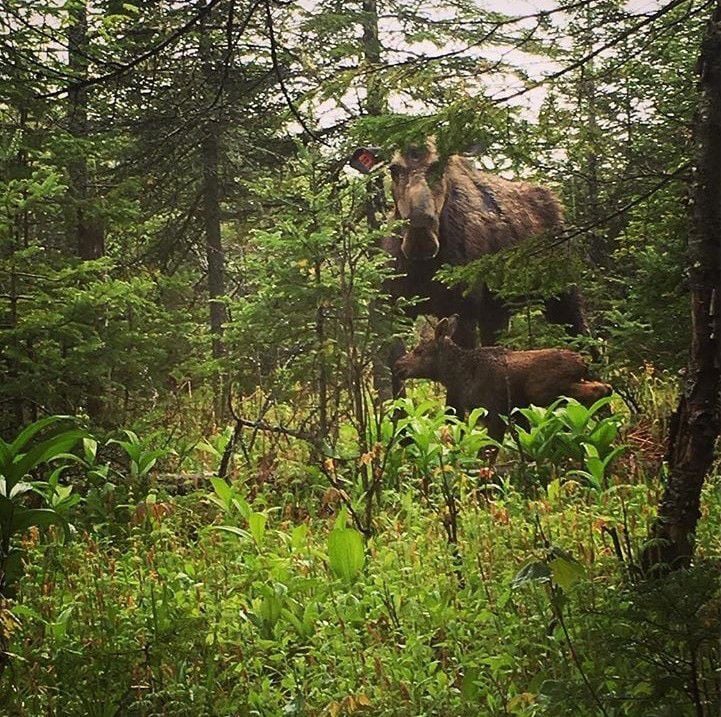 Moose, like this cow and calf seen in Jefferson, have had an interesting history in New Hampshire.

THERE IS no creature roaming the New Hampshire woods larger than the moose, which has logically become one of the many symbols of the Granite State. I have seen thousands of them and still marvel at their massive stature and mystical existence.

Almost 20 years ago, I took part in an exciting hunt, and, as the 2020 season begins, I take time to reflect on how things have changed.

The history of moose in our state has been a curious one with constant fluctuations in the size and health of the herd. Currently, it would seem that the population may have reached a stable level and management plans are in place to keep it that way.

In the late 1800s, there were almost no moose in New Hampshire. For the next 100 years, lack of habitat kept their numbers so low that most residents were unaware of their existence.

When biologists determined that the population had reached a level of sustainability, the first moose hunt was provided. The year was 1988 and the population was estimated at around 1,500. This hunt, like many others, was used as a valuable tool to manage the herd and collect data on individual health.

Before 1988, scientists had little data related to age, growth and reproductive success. As animals were brought to check stations by hunters, important information was collected.

Today, a data set with over 30 years of information can be used to identify trends and define current conditions.

In the late 1990s, the moose population in New Hampshire was at its peak. Estimated at over 7,000, these creatures were starting to exceed their biological and cultural carrying capacity.

In Coos County, it was not uncommon to see 20 in an average day. It was the subsequent rate of moose vs. vehicle collisions that prompted a new attitude toward the moose population. There were simply too many moose and a decrease was necessary.

Around the same time, nature followed a familiar course in response to their overabundance. Higher densities led to an increase in parasitic infections, most notably winter ticks and brainworm.

The current moose population is estimated to be around 3,500 with continued research guiding management strategies. By means of radio telemetry, cows and calves have been tracked and monitored, and survival rates have been examined. When any animal is tagged and followed, seasonal habitat preferences can be defined and prioritized.

Technology is helping moose management in other ways. A new blood test is being used to detect brainworm that allows a sample to be drawn from a living animal. In the past, a sample of the brain was used and could not be conducted unless an animal was deceased.

Nutritional parameters are being measured by collecting waste from animals as they wander unknowingly through the landscape. Proteins in their urine, for example, can tell biologists how well an animal is surviving the winter and predict crucial times related to fat reserves and risk of malnutrition.

New Hampshire moose have had an interesting history, especially in our lifetime. Like every creature, they face certain challenges that determine their health and abundance. We are very lucky to have them and the 2020 season will be an exciting one.