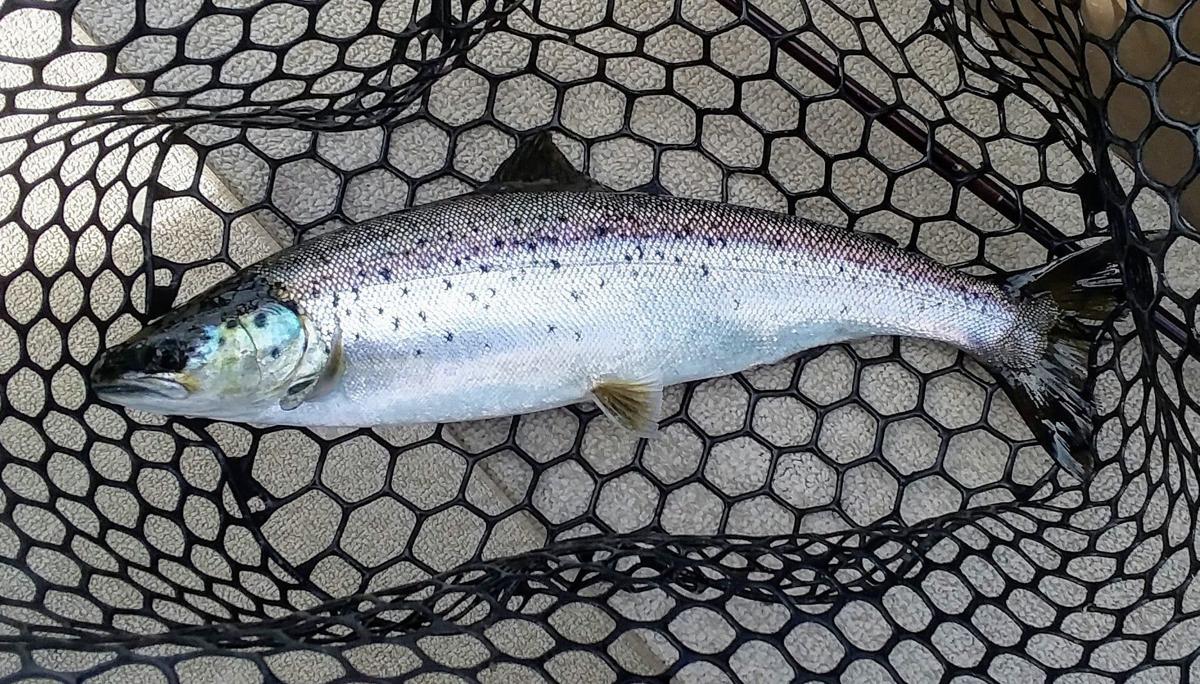 THE OFFICIAL ice-out on Lake Winnipesaukee was declared on April 6. When climate and weather conditions combine with the biology of a specific fish, successful anglers recognize the relationship and often have positive results.

In early April, as the ice is retreating from our large lakes, a small but important fish begins its process of reproducing. Rainbow smelt, known scientifically as Osmerus mordax, are triggered by water temperatures in the mid-30s to seek out their preferred spawning locations. In this case, heavy spring flows from incoming brooks are what the smelt are looking for.

As swarms of these baitfish enter shallow water, predator fish are quick to follow. After a long winter of reduced food availability, landlocked salmon will gorge on this food source and feed at all times of the day.

As clouds of smelt move out of the lakes and into the streams, salmon will occasionally follow them right up the brooks. Most of the action takes place in the shallow lake water near the inlets, and anglers explore these areas slowly in boats until the fish are found.

Trolling for salmon is a long tradition in New Hampshire and by all accounts, a rite of spring. Cold water and many days with air temperatures below freezing make this event a gradual transition from winter. Gloved hands and winter hats are found on those anglers willing to chase spring salmon.

As boats slowly cruise around, several fishing lines may be seen 40 or 50 feet behind. Each line is set up to reach a desired depth and mimic the image and behavior of a smelt.

As the season first begins and the water is still cold, live bait seems to be the most effective. Smelt can be purchased at most bait shops and must be pulled through the water in a delicate manner and at the correct speed. It also becomes important to check the bait frequently. If an hour goes by with no strikes, the bait might be tangled, twisted or stuck to a leaf or stick.

As April moves on and the water approaches 40 degrees, the smelt are still spawning and salmon become much more aggressive. It is at this time that artificial baits become an option.

Trolling streamer flies is a favorite approach and can be so effective that I try to tie a bunch every winter in preparation. Occasionally, when salmon are found in great numbers, the boat can be shut off, anchored, and fly-casting can be employed.

Another effective artificial bait is a lure known as a jerk-bait. Basically a plastic fish-shaped lure, they come in a variety of sizes and colors. It may seem logical that those most closely resembling a smelt would be best, but many salmon are caught on red, black and even orange jerk-baits. These lures are designed to travel to very specific depths when trolled and make the approach much simpler. Instead of weighted lines or sinkers, the lure does all of the work.

Spawning smelt are so dense and so predictable that many other game fish feed on them in the spring. While trolling for salmon, I have caught many lake trout and lot of smallmouth bass.

As April turns to May, rainbow smelt will finish spawning and return to the deep water of the lakes, completing a crucial part of their life cycle. With the food gone, the salmon will also retreat and must be fished for with different methods.

You can be sure that I will pursue them throughout the year and will be sure to report on successes and failures afield.