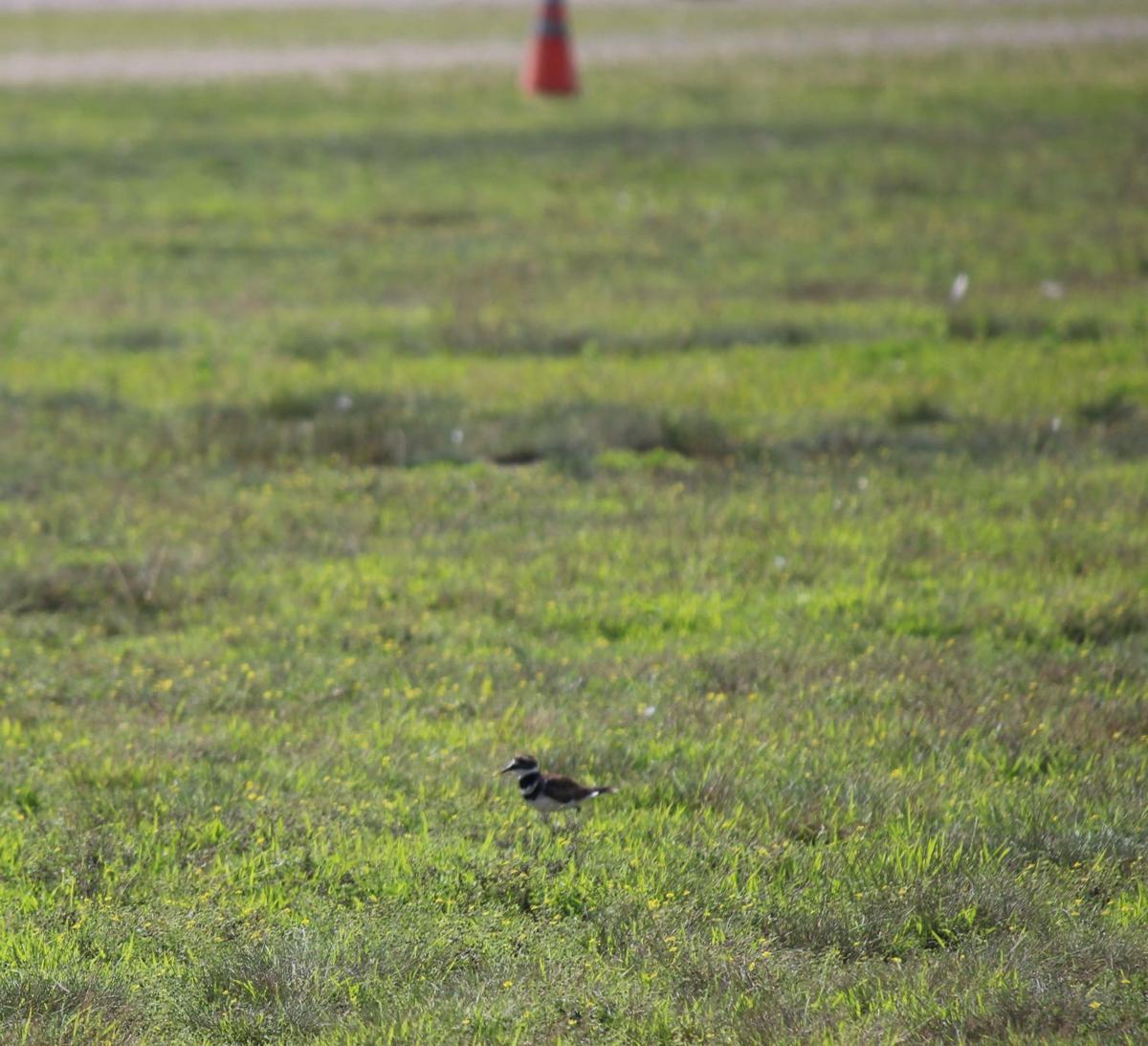 This killdeer was hanging out in the grassy parking lot at Hampton Beach State Park.

IN MY LAST COLUMN, I talked about my time volunteering for New Hampshire Fish and Game at Hampton Beach State Park monitoring breeding pairs, nests, and pre-fledged chicks of the piping plover, a bird on the national endangered species list. Another bird that co-exists with the piping plover is the least tern, a state- (but not federal- for New Hampshire) listed endangered bird. Least terns were subject to massive slaughter for feathers for the fashion industry in the 20th century. Like the plovers, they are ground nesters scraping out an indentation in the sand to lay their eggs.

The terns can be particularly defensive, diving low and fast and calling out if you got too close to their nests, which were enjoying the benefit of also being within the rope lines of the plover nesting areas. Except for ground nesting, the terns are almost completely different from the plovers. The adult terns fly a lot, going to the water to catch small fish to feed hatchlings. The plovers forage around the patches of beach grass, the dunes, and the wrack line where seaweed stays behind as the tide recedes and provides great foraging for insects. The terns inadvertently help the plovers by being more aggressive toward potential and actual intruders. And sometimes they are aggressive with each other, the adult plovers feigning injury and leading the terns (or huge gulls) away from their chicks.

I have always loved the sassy little terns. They are sharply appointed with their black crown and black eye stripe painted along each side of their face ended at their orange beak (common tern beaks are more yellow), their crisp darting flight, sharp wings and split pointed tail.

Last week when driving into the state park for my plover monitoring shift, a killdeer flew in front of my car just as I entered the grounds. The Fish and Game plover monitor told me that killdeer were nesting in the grassy parking lot at the entrance. We used to have a killdeer nest on our property but I haven’t seen one in quite a while.

What I didn’t realize until I looked the bird up on the Cornell Lab of Ornithology site is that a killdeer is a large plover. So it makes sense that the killdeer also just scratches a slight indentation in the ground and lays its eggs. The Cornell Lab also mentions that killdeer are quite noisy and therefore acquired nicknames like “chattering plover.”

Plovers, terns, killdeer, mockingbirds, all manner of gull species, and some kind of sparrow that I have not identified that hangs out in the dunes makes Hampton Beach State Park a bit of a birder’s paradise.

I use a lot of metal “pipe panel” horse fencing. Wasps love these things. If there is any kind of opening — the end of the tube, a hole caused by rust — they set up housekeeping. Wasps have built a nest in the bottom opening of a vertical tube in a metal gate — they are very unhappy when you open the gate, which you do a lot since that is what gates are for. The wasps in the swinging nest aren’t happy and the ones returning to the nest are not happy because they don’t know where their nest went and they rightly accuse me of moving it. I run like the wind which leaves the gate to my horse’s pen open. I have to employ numerous tricks — rakes, ropes, anything handy — to close the gate from afar. I make note and, despite my dislike of insecticides, spray the nest first thing the next morning. Although I have become more accommodating over the years, anyone who has known me for more than five minutes probably knows I have a bit of wasp-phobia.

The other day I was intrigued by a wasp observation. While puttering around the barn I noticed a small wasp beside a teeny tiny hole on the end of a wooden door that was on its side. Another wasp joined the first and they both crawled into this tiny hole. I made a mental note that this may become a problem.

At the end of the day as I was doing the evening barn feeding I thought to look at the door. There was no longer any hole! The door (except for the bottom) is painted a light yellow. There was a spot on the bottom of the door that looked like a stray spot of splattered paint. But I looked closer and realized that the paint splatter was actually dirt.

The wasps that crawled into the hole were mud daubers. They must have been two females who crawled in and deposited an egg or two (they also leave food for when the egg hatches) and then sealed the hole with mud. And off they go wishing the kids good luck. Despite my phobia, as with everything in nature, wasps are fascinating creatures.

Cheryl Kimball is a freelance writer who lives north of Rochester. Email her at naturetalksck@gmail.com.