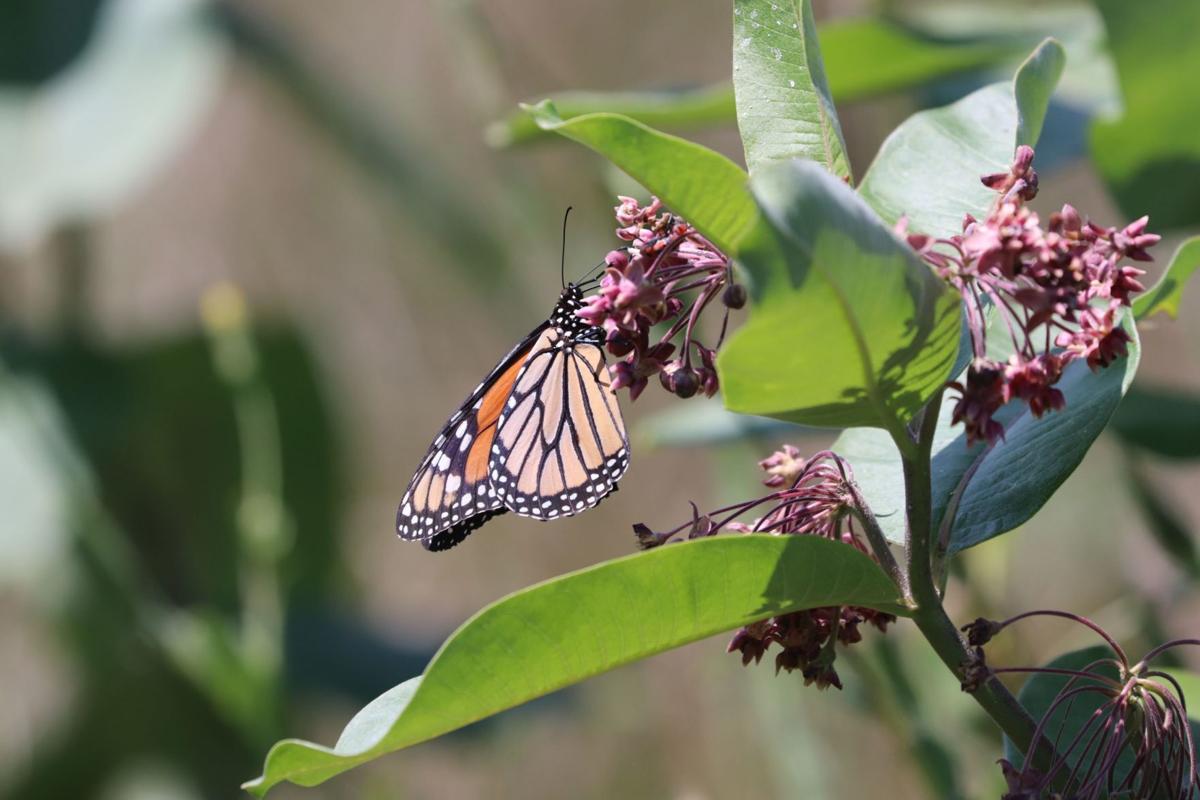 Adult monarch butterflies feed on the nectar of many types of blossoms, including milkweed (pictured here), but as caterpillars their only food source is milkweed leaves. 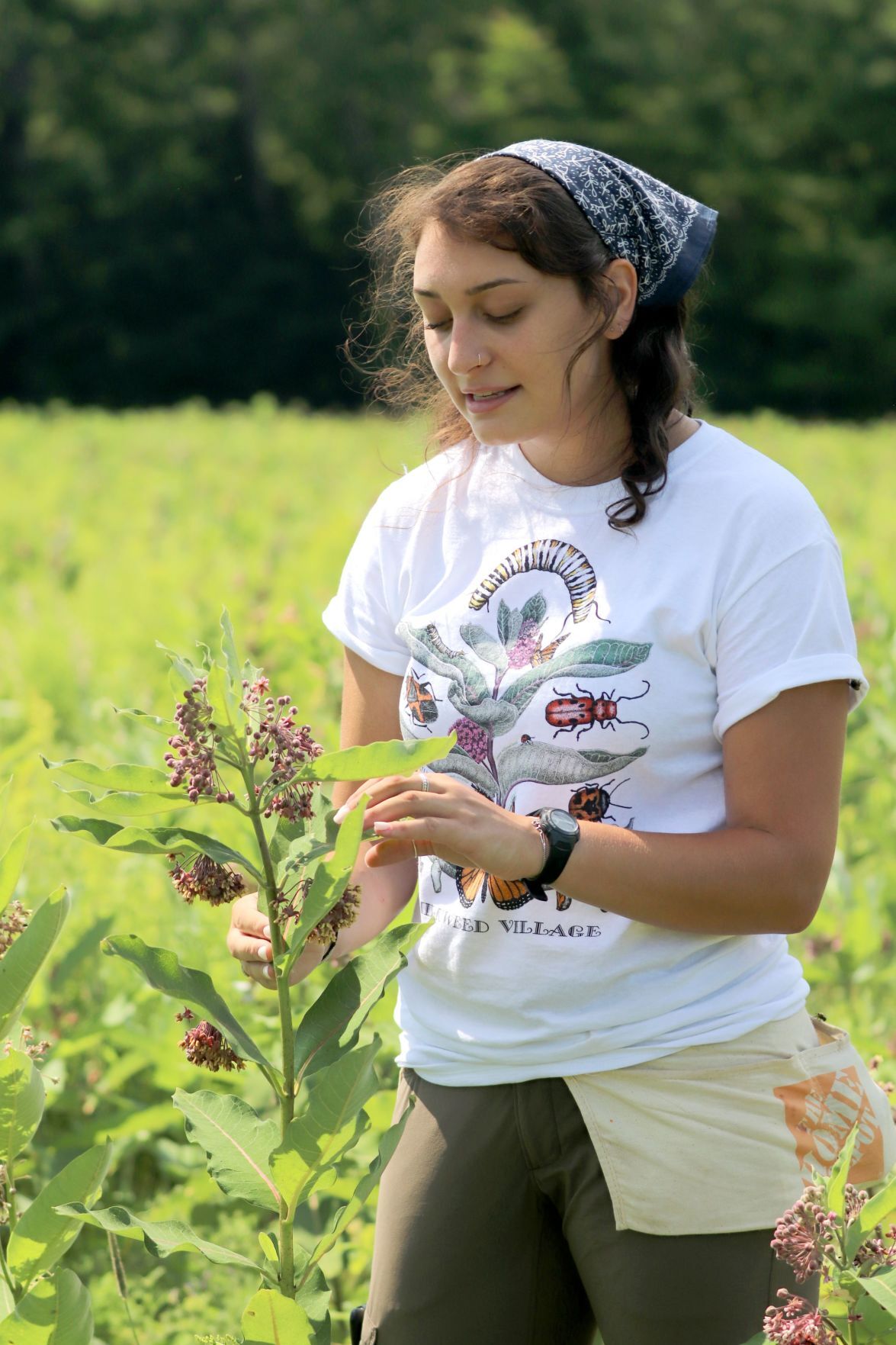 Milkweed bitten by a Monarch. 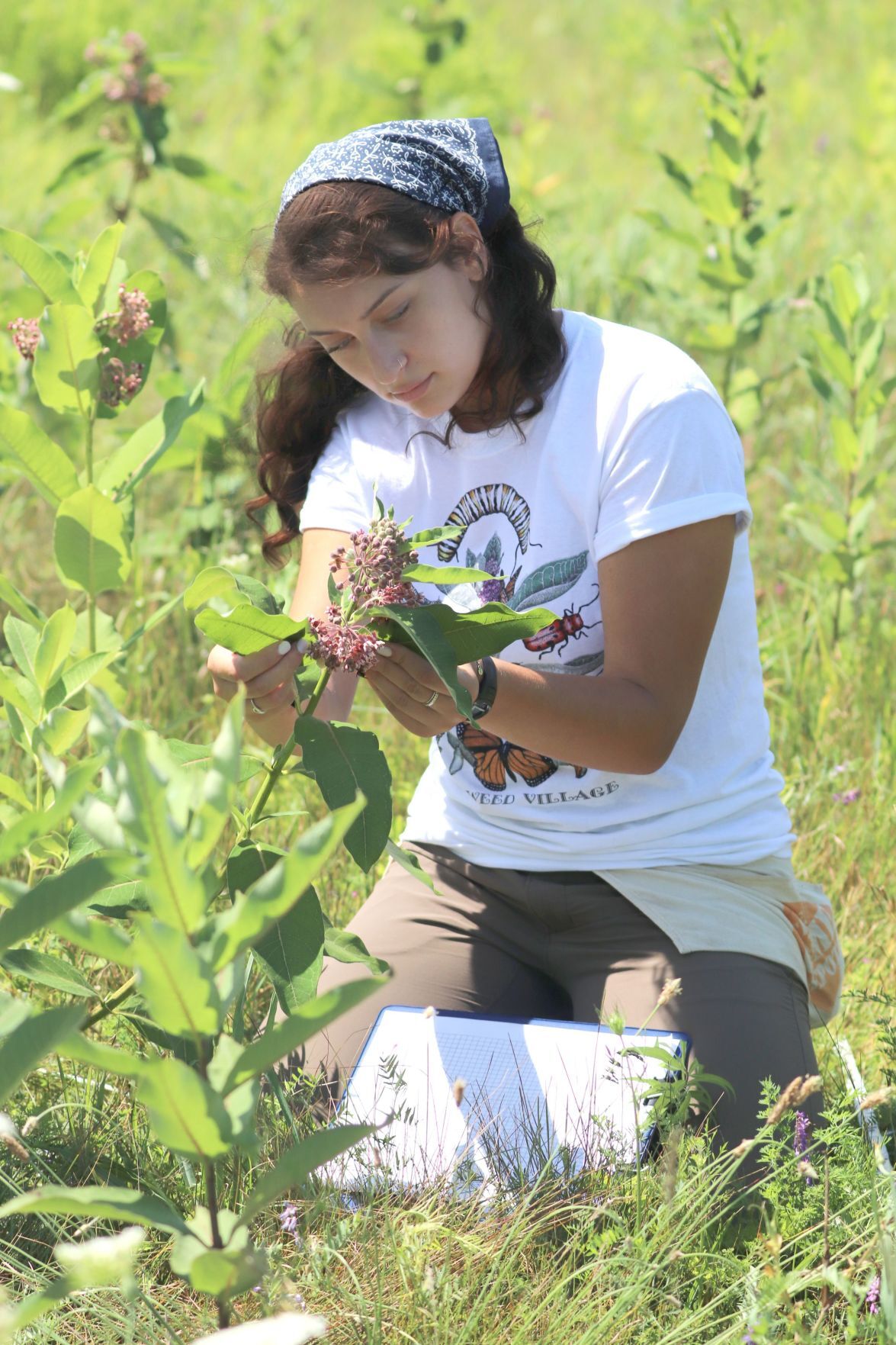 Katie Galletta of Goffstown, a student at Bowdoin College, checks a milkweed plant for signs of monarch butterflies or other insects. She is studying potential relationships between insect presence (or absence), plant damage, and occupancy by monarch eggs or larvae. 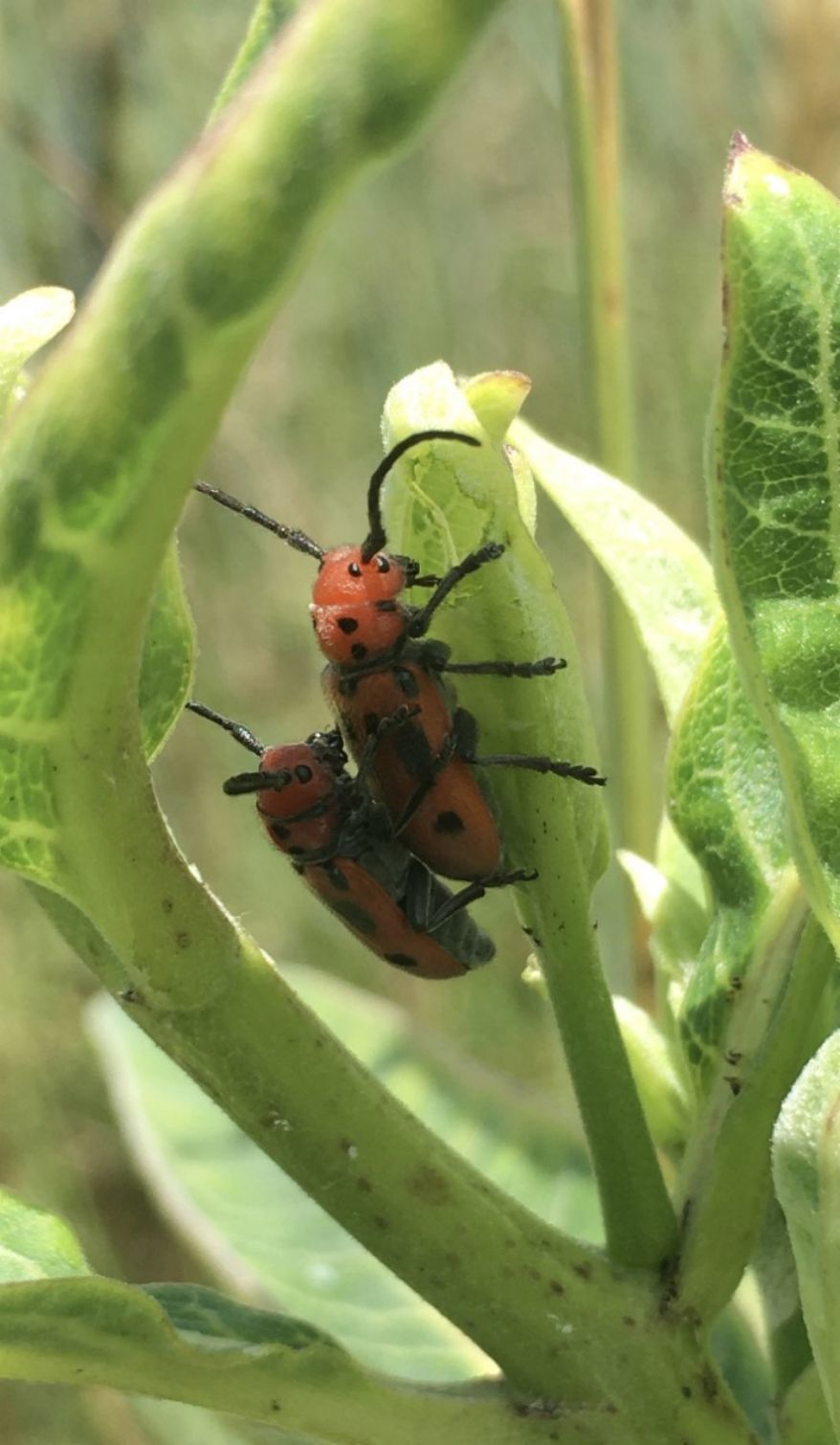 Four-eyed beetles (Tetraopes tetraophthalmus) are so named because each compound eye is split into two parts by its two antennae. They are one of the few insects in the “milkweed community,” a group that feeds on the plant, which is poisonous to other species. 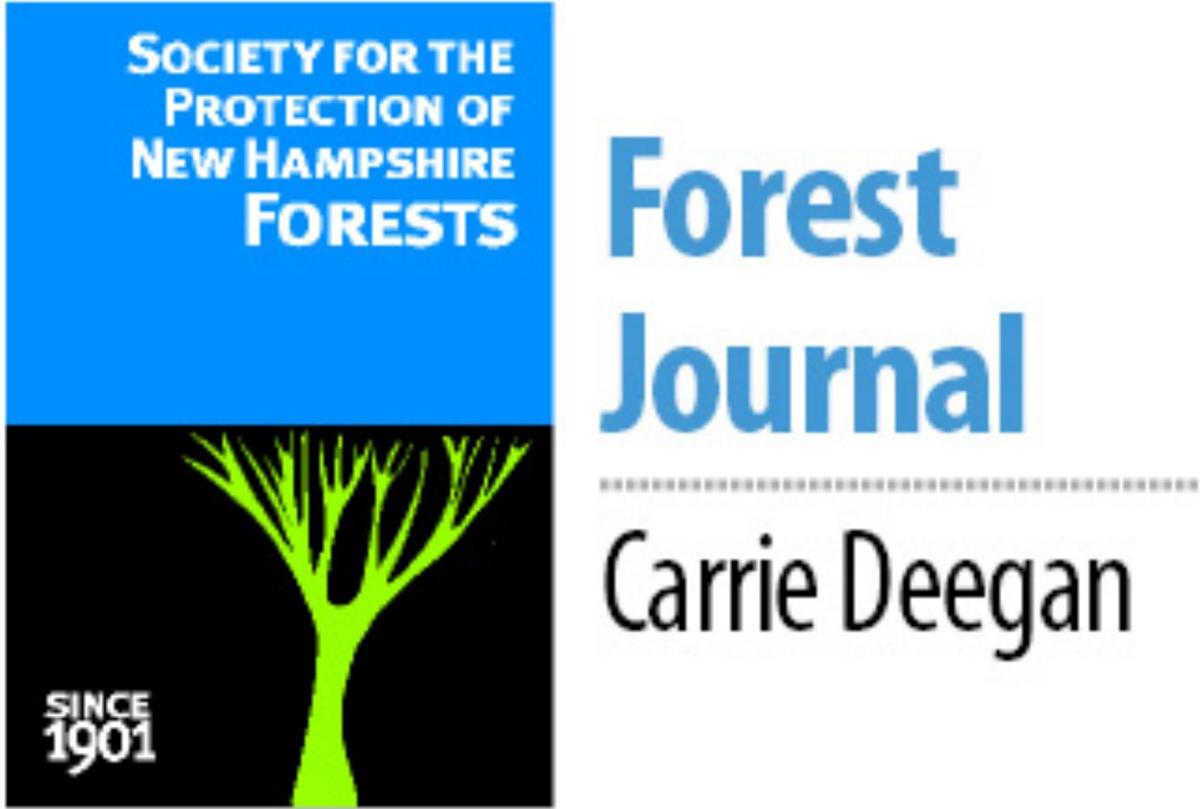 Adult monarch butterflies feed on the nectar of many types of blossoms, including milkweed (pictured here), but as caterpillars their only food source is milkweed leaves.

Katie Galletta of Goffstown, a student at Bowdoin College, checks a milkweed plant for signs of monarch butterflies or other insects. She is studying potential relationships between insect presence (or absence), plant damage, and occupancy by monarch eggs or larvae.

Spotting a monarch caterpillar on the underside of a milkweed leaf is one of the quintessential rites of summer.

In the right location, it’s not that hard to do: Common milkweed (Asclepias syriaca) plants are widespread in New Hampshire in old fields and open roadsides, even popping up in less-than-scrupulously tended garden beds.

Milkweed is the only food plant for larval monarch butterflies (Danaus plexippus), but depending on milkweed for your diet is a hard life.

As anyone who has ever broken a leaf knows, milkweed is full of a sticky white latex that oozes out immediately when the plant is injured. The substance will stick your fingers together, and it’s also highly toxic to most animals thanks to phytochemicals called cardenolides. Those creatures who eat milkweed have specifically evolved to do so, and they play a dangerous game.

There are 11 species of specially adapted insects that feed on milkweed leaves, of which the monarch is just one. Katie Galletta, a student at Bowdoin College in Brunswick, Maine, spent her summer studying the interactions between monarchs and the rest of this “milkweed community.”

“Herbivorous insects on milkweed are from many different orders — there’s the monarch butterfly, but also several beetles, flies, aphids, and even a moth,” explains Galletta. “Because they have to be so specialized to eat milkweed, there isn’t an overwhelming number of species, and that makes the milkweed community a great study system.”

Near the top of Wilson Hill, on the Forest Society’s High Five Reservation in Deering, Katie spent many hours closely examining milkweed plants for signs of these herbivorous insects. She is trying to determine whether monarch butterflies choose to lay eggs on particular plants based on the number and type of other bugs feeding on them.

Female monarchs lay one egg at a time, and it’s rare to find more than a single egg or caterpillar on one plant. As you watch a monarch flitting from plant to plant, where it stops may look random, but the butterflies are actually using their feet and their long tongues (proboscises) to sense chemical markers in the plants.

When a milkweed plant is stressed, as when insects are feeding on it, it may release chemical signals that monarchs can sense, including more toxins. Could monarchs be choosing plants with fewer other herbivorous insects feeding on them?

Consuming the cardenolide toxins in milkweed makes the “milkweed community” insects poisonous to predators, which is to their benefit. Most have evolved bright warning coloration — reds and oranges, or striking yellow and black patterns — to warn predators before they have a taste. But too much cardenolide toxin can be poisonous even to the milkweed feeders themselves, and they crawl a fine line between self-protection and self-poisoning.

“As they say, the dose makes the poison,” Katie remarks.

The stickiness of milkweed’s latex is also a problem. Research indicates that more than half of monarch caterpillars may perish from their first meal, primarily because the latex glues their mouthparts shut.

To survive, the newly hatched caterpillar has to carefully gnaw a small horseshoe shaped opening in the leaf, draining the latex in that area before trying to fully consume the leaf matter in the center. Other insects have alternate tactics, severing or piercing leaf veins to drain the milky substance before consuming the leaves.

At High Five, Katie checks each leaf of every milkweed plant along a 30-meter swath, counting and recording the number and species of insect as she goes, and quantifying the amount and type of leaf damage each plant has sustained.

She knows the difference between a four-eyed beetle’s munching on the end of a leaf, the brown spot indicating the larva of a leaf-mining fly consuming interior leaf tissue, and of course, the small horseshoe-shaped hole made by a young monarch caterpillar.

By the end of the field season, she hopes to have a large enough data set to identify any relationships between insect presence (or absence), plant damage, and occupancy by monarch eggs or larvae.

Katie says she has appreciated working with conservation landowners and organizations for her research. Her 28 study sites, including High Five and also the Tom Rush Forest in Deering, are scattered across southern New Hampshire, from Portsmouth to Peterborough. Most are on lands conserved by municipalities or land trusts like the Forest Society, New Hampshire Audubon, or the Harris Center for Conservation Education.

When the Goffstown native finishes her studies at Bowdoin, she plans to go to graduate school, likely in a conservation-related field. “When I first visited High Five and Tom Rush,” she says, “I was amazed at the concentration of milkweed in these fields — it’s great!”

Katie has clearly made the connection between land conservation and protection of species, even those as small as monarchs, milkweed tussock moths and four-eyed beetles. It’s comforting to know that battles between milkweed plants and their community of herbivores can rage on in quiet confrontation in these wild spaces, whether or not we figure out why.

Carrie Deegan is community engagement & volunteers director for the Society for the Protection of New Hampshire Forests. Contact her at cdeegan@forestsociety.org.