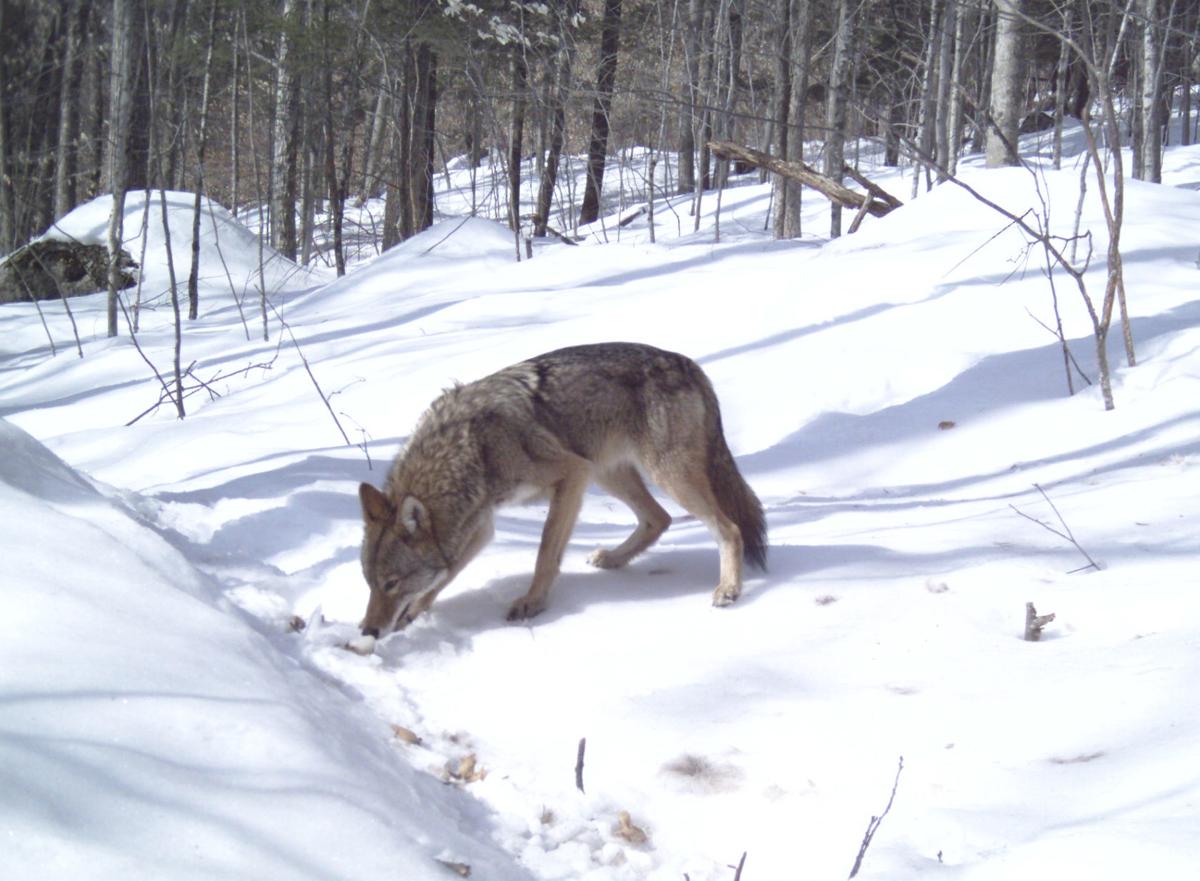 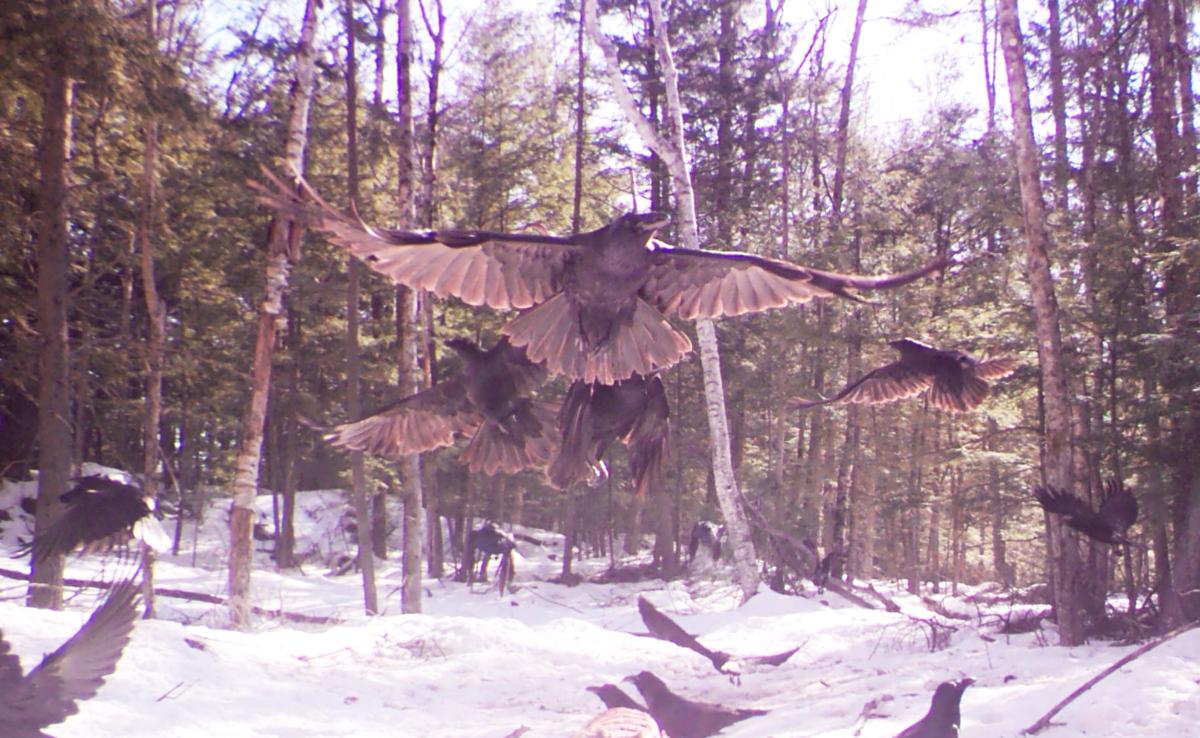 Noisy flocks of ravens and crows help to reveal the location of a deer carcass deep in the woods. 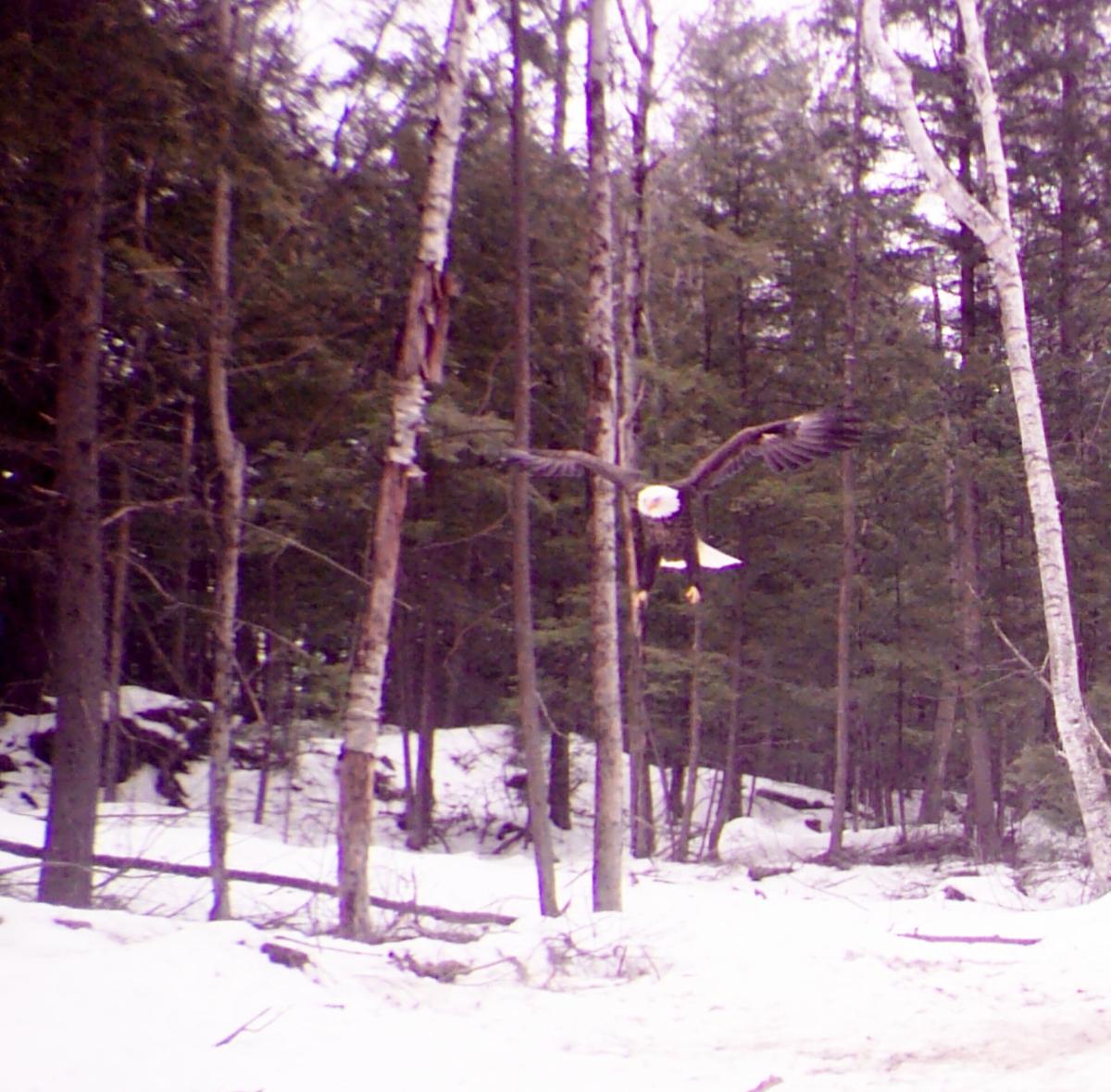 Thawing grass and weeds must smell exotic and sweet to the deer. Newly open ground draws in deer from areas where snow persists in the dense shade of hemlocks and pines and on north and east-facing slopes where snow takes weeks longer to fully melt.

Our local deer herd swells annually at our south-facing locale. Family groups of six or more related does — sisters, daughters, aunts — merge with others into a large herd comprising 20 or more deer, including large bucks sans antlers. They graze warily out in the open, ghostly gray apparitions in pre-dawn gloom and at dusk. The deer find tiny patches of leftover clover and snuffle their snouts in the oak leaves while tilling up tasty acorns. By day, they bask in the sun, saving heat calories and conserving their dwindling fat reserves.

Northern New Hampshire lies at the northern limit of the white tailed deer’s historical range. Deer survival is an endurance race spanning months of near-starvation while subsisting on a meager diet of bark, twigs and the buds of low-growing hardwood saplings and shrubs.

The arrival of spring and availability of more nutritious vegetation precedes the birth of fawns in June. Timing is critical. A milder winter and early spring contributes greatly to deer survival.

The March migration of deer to snow-free, south-facing slopes was not as pronounced this winter, but didn’t go unnoticed — by us or by predators. We observed a corresponding uptick in coyotes and heard more nighttime yips and howls during the late February breeding season.

By March, we heard a new sound: the cacophony of crows. The clamor of crows and raucous ravens recently led us to a fresh-killed deer carcass.

Emboldened by hunger and aided by a crust of ice on the late-winter snowpack, coyotes are successful at driving and killing winter-weakened deer. It’s a predator-prey ballet as old as the hills — a New England equivalent of lions and gazelles.

Coyotes follow deer all winter but seem to gain an advantage in late winter, when deer are at their weakest and concentrated near open ground. We have found deer carcasses each of the past six years with similar seasonal timing.

A fresh deer carcass rarely lasts a full week. Coyotes fed heavily for a few nights, perhaps attempting to divide the carcass and drag it away. We found visible feeding beds in the snow compacted by individual coyotes, each with a portion of their shared family meal.

Coyotes know once we have visited their kill, too. The trail camera fires each frame with a faint audible “click” and carries a suspicious scent of people and plastic. Coyotes never returned to finish their meal once daytime bird activity increased. A bobcat arrived and did oblige us with a selfie.

We look for late winter deer carcasses because we like seeing trail camera photos of our wild neighbors. We would never see them otherwise as they tend to see, hear and smell us first.

By day, crows and blue jays scavenge meat. Turkey vultures, resident in the Seacoast region for much of the winter, begin appearing further inland by April — maybe March this year.

Senior raptor biologist Chris Martin of the Audubon Society of New Hampshire says, “People don’t realize how many different bird species are carnivorous or seasonally carnivorous. Mobs of crows visiting deer carcasses are not uncommon. I’ve seen photos of everything from chickadees through blue jays and starlings, up to red-tail hawks and rarely a golden eagle.”

The eagle has landed

Martin predicted our “carcass cam” might reveal a bald eagle on a deer carcass one day. We didn’t wait long. Within 48 hours after we found the kill and placed the camera, the rowdy flock of crows included a bald eagle — the first ever, as far as we can tell, for our woodlot.

Martin notes that increasing numbers of breeding pairs of bald eagles are already incubating eggs by March. A statewide eagle census was conducted by volunteers in January. The eagle count this year surpassed 100 for the first time in 40 years.”

Bald eagles are no longer classified as federally endangered or threatened.

While it may be easy to categorize coyotes as “ruthless” predators or view deer as “hapless” prey, that predator-prey relationship is complicated and often clouded by human values.

One thing seems certain: When the (wild) Dogs of March kill a deer, many other forest animals benefit and readily share the opportunity to scavenge meat protein during one of the leanest seasons of the entire year.

Naturalist Dave Anderson is senior director of education for The Society for the Protection of New Hampshire Forests. E-mail Anderson at danderson@forestsociety.org.