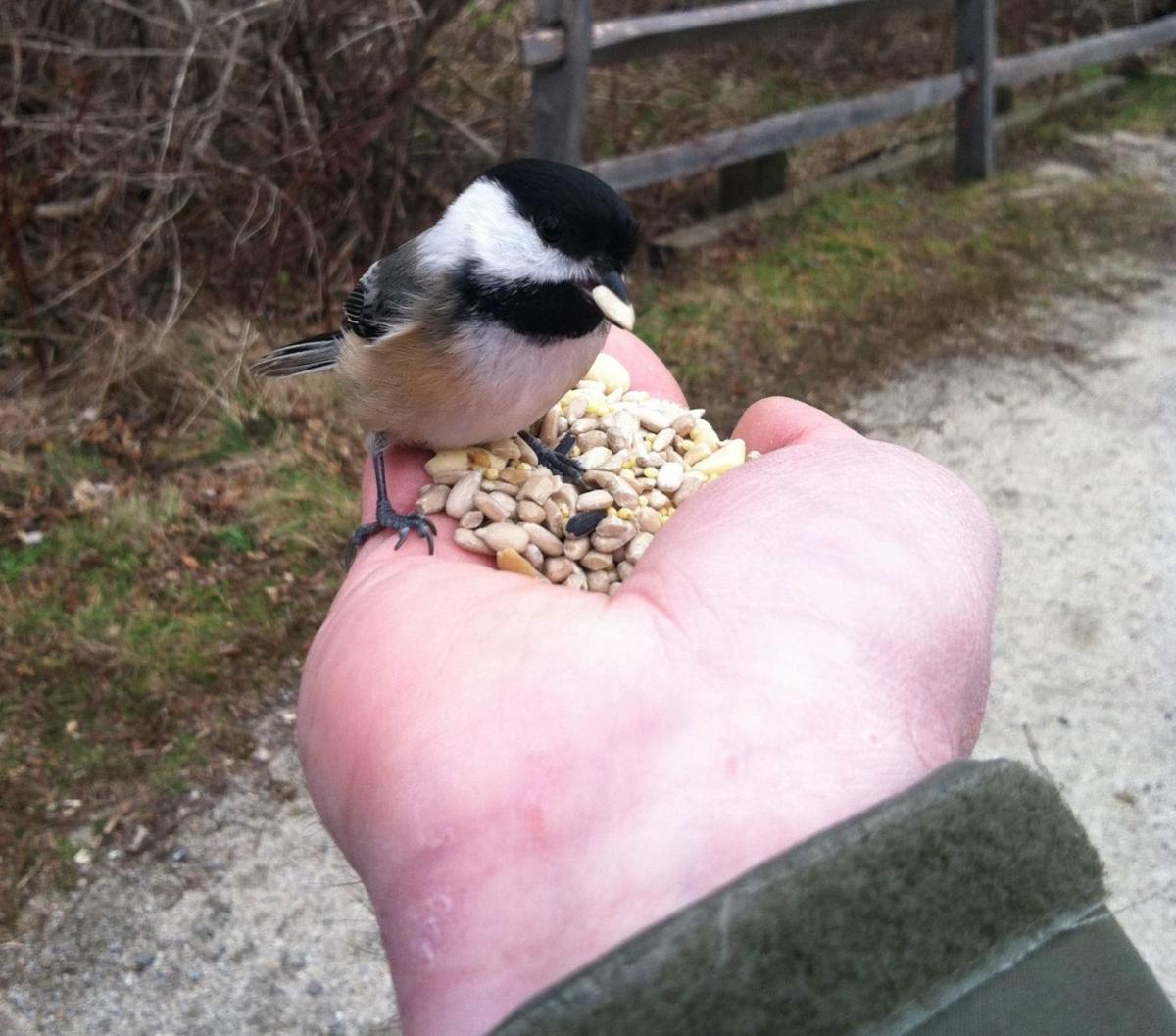 If you’re very patient, you might be able to coax a chickadee to grab a seed from your hand. Eating is their near-constant focus in the winter. 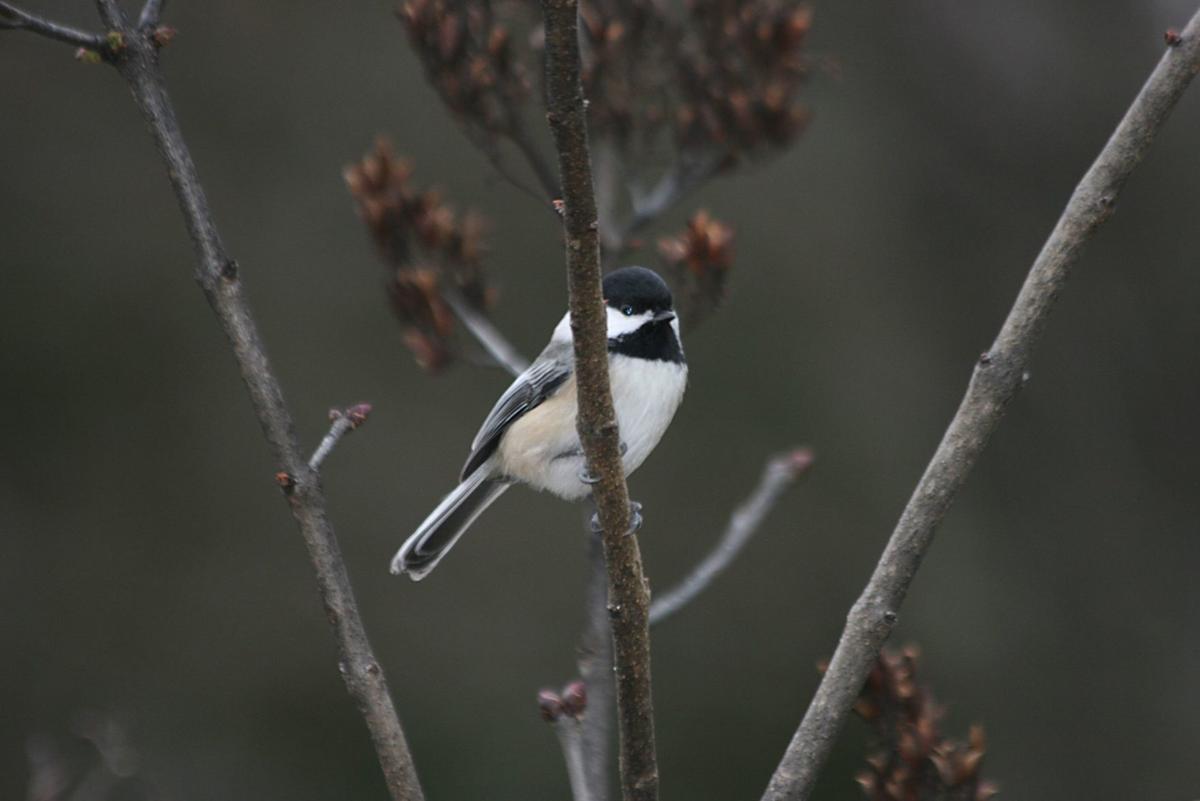 The black-capped chickadee may be small (about half an ounce) but it's no lightweight when it comes to intelligence or agility.

If you live near a patch of forest or hang a backyard feeder in winter, you’ve probably got a few black-capped chickadees (Poecile atricapillus) flitting around outside as you read this.

This familiar feathered nugget weighs less than half an ounce, about the heft of a single AAA battery, but it is one tough little bird with a big personality.

As someone who spent a good deal of my 20s banding birds on various field research projects, I can say with authority that different backyard bird species have different temperaments. There are individual exceptions, of course, but it’s not uncommon for a gray catbird or a blue jay to scream bloody murder when caught in a mist net, or for an American robin to enter a temporary stupor, as if mortally wounded, after you’ve fitted one with a new band.

But chickadees? They fight back. A chickadee will peck spiritedly at your fingers and the banding pliers during the entire procedure, and especially plucky individuals will squirm and get their clawed feet going, too. All of which made me wonder recently, as I was gazing out at some chickadees on an especially nasty winter day: Do these little birds survive the winter on sheer grit?

Of course, the answer is no, not really. The black-capped chickadee is supremely adapted to survive in cold winter climates like New Hampshire’s.

One thing it handles with amazing proficiency is thermoregulation, maintaining a body temperature of 107 degrees Fahrenheit even on those polar vortex days with sub-zero temps.

Because of its small size, the chickadee has to work much harder at this than larger birds like blue jays, cardinals or woodpeckers. The chickadee’s larger surface-area-to-volume ratio means that it loses heat faster to its surroundings, and to compensate, it has to increase its metabolism. A chickadee’s basal metabolic rate (BMR), which is the energy spent to maintain basic body functions like breathing and temperature maintenance when at rest, is significantly higher in the winter compared to summer.

To fuel higher metabolic rates in colder months, chickadees need to eat. A lot. They routinely consume more than half of their body weight per day in winter.

Their metabolisms are so fast that they are actually able to put on a significant layer of fat every day (about 10% of their body weight) and will completely lose that layer overnight, typically shivering in a sheltered spot or tree cavity to keep warm. (That’s the equivalent of a 150-pound person gaining 15 pounds of fat after consuming about 80 pounds of food during the day and having it melt all away while they sleep!)

That the fat is used up as “maintenance fuel” overnight is a good thing, since chickadees need to be light and agile fliers to escape predators like sharp-shinned hawks during the day. On very cold nights, they are able to enter a controlled hypothermic state, or torpor, lowering heart rate and reducing body temperature by 10 to 15 degrees. This certainly saves a bird energy, but it comes at a price because chickadees in a state of torpor cannot move quickly and are more vulnerable to predation.

How do chickadees find all the food that they need to fuel those rocket metabolisms all winter? That, too, is a mystery worth exploring.

First, they spend the autumn months caching food like seeds and berries in hiding places they will come back to when the weather turns colder — places like crevices in tree bark or holes in dead snags. There has been considerable research into spatial memory and cognition in chickadees, and most of it suggests that they can remember not only where all these food caches are, but also what is in them (some foods have higher caloric value) and how long they’ve been there (some spoil sooner and may need to be eaten earlier).

Spatial memory in birds is controlled by a part of the brain called the hippocampus, which in chickadees sits just under that black cap of theirs. Scientists at Rockefeller University in New York have found that the hippocampus increases in size by 30% every autumn in both adult and juvenile chickadees, adding neurons presumably to gear up for all that recall required in the winter.

This finding was a bit of a scientific revelation, as the brains of adult vertebrates do not typically increase in size after reaching maturity. As spring approaches, a chickadee’s hippocampus shrinks again, ready to make new neural connections the following autumn.

Will hanging a feeder help your local chickadees survive the winter, giving them a break from having to recall and relocate cached food items? Research suggests it will: Studies by ecologist Margaret Brittingham in Wisconsin found chickadees who had access to bird feeders had significantly higher overwinter survival rates (69%) compared to those who did not (37%).

Her research also indicated that chickadees don’t become dependent on feeders; when feeding is stopped abruptly, feeder birds switch back to wild foraging full time and their survival rates are comparable to birds who never had access to feeders. All of this means you can feel free to feed the chickadees without fear they will become too lazy to survive the winter, even if you have to escape to Florida and can’t fill the feeders for a few weeks.

If you don’t mind the cold and have a lot of time and patience to stand very still outside with a palm full of sunflower seeds, chickadees can sometimes even be conditioned to eat right out of your hand. Feeling the tickle of little toenails as a chickadee alights on your palm, grabs a seed and flits away in a tiny puff of wingbeat is an extraordinary treat indeed.

Does a chickadee’s boldness also translate into enhanced winter survival? Science may not be able to answer that question yet, but I would wager that feistiness and guts don’t hurt. As any old-time New Englander will tell you, a little tenacity is a good thing when it comes to making it through February.

Carrie Deegan is Volunteer & Community Engagement Director for the Society for the Protection of New Hampshire Forests. Contact her at cdeegan@forestsociety.org.